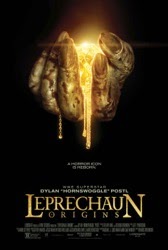 Well, it turns out that the original Warwick Davis Leprechaun is a fucking masterpiece of horror. I don't think any of us saw that coming.

Leprechaun: Origins, the 2014 "reboot" of 1993's Leprechaun produced by WWE Studios, is a true piece of shit -- a movie so ill-conceived and constructed that it's astounding it's seeing the light of day. Even the idea of rebooting Leprechaun is a fairly bad one, but that bit of questionable judgement is the closest thing to a good choice made by anyone associated with this movie.

The movie opens just outside a forest in Ireland -- one that looks a lot like a jungle. A couple is running away from something. We don't see what it is, only what it sees (courtesy of some POV heat  vision that renders everything in gold, because of course it fucking does). The couple gets pulled into the forest jungle. This Leprechaun movie seems an awful lot like Predator.

Four more dipshit assholes show up in Ireland. They're rude to the three people they encounter (seriously, there are about 10 people in this entire movie). They get a room for the night. A monster shows up outside the room, but they're locked in because those superstitious Irish folk are hoping to sacrifice them to the monster. The monster turns out to be the Leprechaun. The rest of the movie focuses on the four young people (among them Brendan Fletcher of Freddy vs. Jason and more than one Uwe Boll movie) trying to get out of the room and stay alive. Some are more successful than others. 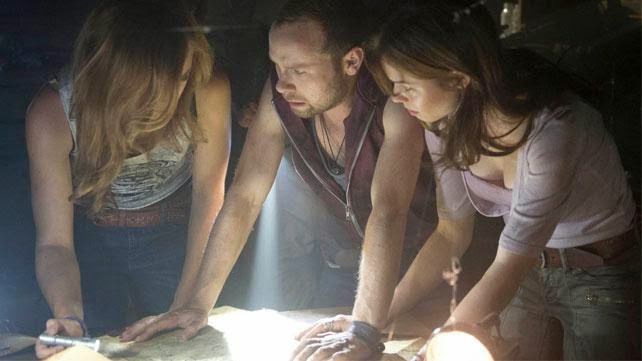 As a lifelong fan of genre movies (especially horror), I have trained myself to adjust expectations and watch them in a way that's different than how I might view big Hollywood films or awards-season indies. Leprechaun: Origins only has to work on the level on which it is intended -- it must be the best possible version of Leprechaun: Origins. Judging by those standards, the movie is still a fucking pile of blarney. It's stupid and it's lifeless and it's humorless and it's lacking any good scenes save for one: a character is killed suddenly and accidentally, and the way it's timed and shot creates a genuine surprise. It helps that final girl Stephanie Bennett plays the moment completely realistically. Her horrified reaction is genuine. These are the best 25 seconds in a 90-minute movie.

The big draw of Origins is that it casts WWE wrestler Dylan Postl, who wrestles under the name Hornswaggle, as the titular Leprechaun. Makes sense, I guess, in that Postl is a little person and a perfect fit to play the monster if WWE wants to revive the Leprechaun series. Even that decision is completely fucked, though, because Postl isn't playing a leprechaun at all. He's playing one of the rubber-suited monsters from The Descent. He doesn't speak. Doesn't wear the funny hat or shoes. Doesn't give a shit about gold. He's just a nondescript monster that wants to kill people. Even his diminutive stature is a non-starter, since you can't ever tell it's a little person under all the prosthetics. It's a disaster of execution.

Maybe he does give a shit about gold. I don't know. We're told (barely) that he's after a couple of doubloons that were apparently taken by the couple in the first few minutes of the movie, but when they're killed off (by the Not Leprechaun and off camera, because fuck my life) they just sit in a backpack in the woods until someone randomly stumbles upon them in the final five minutes. That's the only tie the movie has to anything leprechaun-related.
And there you have it. Despite being called Leprechaun: Origins, there is nothing very leprechauny nor originy about the movie. If it's a prequel to the series that launched in 1993, it fails to tie into those movies in even the slightest way. I mean, couldn't one character have said something like "Let's blast this ugly fucker into space!" or "I wonder what Ice-T would do to this ugly fucker!" or "This ugly fucker looks nothing like Warwick Davis, so I can't for the life of me figure out how he's going to develop human-looking features, the ability to speak in shitty limericks or learn how to shine shoes!" Throw us a bone, Leprechaun: Origins.

The film is directed by Zach Lipovsky, a former editor, actor and visual effects artist who has been at the helm of a handful of TV movies before getting his "big break" with Leprechaun: Origins. I don't want to lay the failure of the movie at his feet. After all, the movie is in focus and I can't remember any actors accidentally bumping into things. He's clearly a director for hire, working from a (terrible) script from first-time writer Harris Wilkinson, whose take on the Leprechaun series appears to be to get rid of all the goddamn leprechauns. That would be fine if he replaced it with something. Anything. Instead it's four people trying to get out of a room, then four people tied to trees, then four people trying to get back into a room. If the movie was shot in more than the span of a day, someone wasted a lot of money.

I'm not opposed to someone remaking or (ugh) rebooting the Leprechaun series, probably because I have no attachment to the original movies. At least those movies seemed to understand the inherent ridiculousness of a horror franchise built around a leprechaun and embraced it (plus two of them were directed by the great Brian Trenchard-Smith). I'll never forget the scene -- I think it's from the first film -- where the characters are being chased by the leprechaun and keep throwing shoes at him to distract him; he's required (by leprechaun law, I guess) to shine them. It's hilarious. Though the series eventually became too intentionally campy and ridiculous, the first couple are serviceable horror comedies with fun practical effects and Warwick Davis having the time of his life as the monster. I've been dismissive of the series in the past, but then something like this comes along and I realize how much the series once had going for it.
One staple of the series has always been humor. Not this one. The humor has been sucked out of Leprechaun: Origins, which wants desperately to be taken seriously as a "real" horror movie. In this, it feels like a relic from 7-10 years ago when a) every horror movie was being remade and b) everything had to be dark and mean spirited and horror movies had to stop being fun for a while. There is nothing fun about this movie. It doesn't even have the decency to be mean-spirited and nasty. It's just so fucking dull. It makes the original Leprechaun seem really, really great by comparison. That movie is not great, but I would watch it three times in a row this instant just to get the rid myself of the memory of this garbage. Now I'm actually looking forward to that Blu-ray box set that comes out in a few weeks. SEE HOW THIS MOVIE HAS RUINED ME??

WWE has another horror film coming out in a few weeks: See No Evil 2, a sequel to the 2006 slasher starring the wrestler Kane. It's directed by Jen and Sylvia Soska and stars Katherine Isabelle and Danielle Harris, and for some reason isn't getting any kind of a theatrical release. Leprechaun: Origins did instead. Lionsgate, you fucked up.
Posted by Patrick Bromley at 12:00 PM