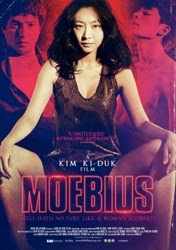 It's tempting to classify Kim Ki-duk's Moebius as "that movie where the kid gets his dick cut off," but that's just not fair. So many people get their dicks cut off in this movie.

Yes, Moebius features a scene in which a teenage boy has his penis cut off. By his mother, no less, who is angry at her husband (the boy's father) for having an affair. When she is unsuccessful at castrating her philandering partner, she exacts her revenge by taking it out on their only child.

That's not a spoiler. While most films in the contemporary wave of Korean revenge thrillers would build and build before finally culminating in this heinous, crazy act, Kim Ki-duk is so hardcore that his fucking movie starts there. The castration is just the jumping off point for a story that takes a number of unexpected turns, including a sort-of romance between the son and a pretty shop owner, who is also the woman having the affair with the father. She's played by Lee Eun-woo, the actress who also plays the (literally) castrating mother. And just in case it sounds to Oedipal to have the teenage boy (Seo Young-ju) becoming sexually obsessed with a woman who looks exactly like his mother, don't worry. Things are going to get even darker and weirder than that when mom comes back into the picture in Act Three. 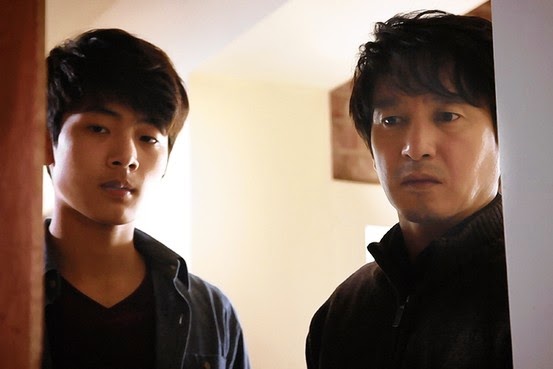 Alas, I've skipped over a number of things, like a gang rape that sends the boy to jail. With his son locked away, the guilt-ridden father begins searching online for information about penis transplants and/or how to still achieve orgasm despite being castrated. What he discovers is a method in which rubbing a rock against the skin until its raw and bloody creates a kind of intense friction that can bring about orgasm for his son, sending the movie down a weird path of depravity that's positively Cronenbergian in the way it combines self-inflicted violence and sexual obsession. Just what are we to make of a scene in which a woman stabs a man in the shoulder, then shakes the knife back and forth inside the wound until he gets off?

Oh, and did I mention that not one word of dialogue is spoken in the film?

That's right. There are no subtitles, no dialogue cards (like in a silent film). I think one character whispers in another's ear at one point, but don't quote me on it. The only sounds the characters make are variations on painful grunts and orgasmic moans, which I suppose is telling about Moebius' chief concerns. Yet somehow it all works, probably because this is a movie about people unable to express themselves in the ways they would like. That repression extends even to their conversations, their emotions withheld until bursting out in whimpers, moans or cries. 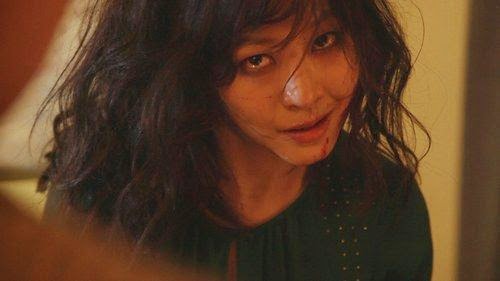 It's all so over over the top that it's a miracle Kim doesn't let the whole thing get away from him. I've seen only a few Kim Ki-duk films (The Isle comes to mind, in which a woman shoves fish hooks into her vagina), so I'm aware of his predilection for extreme imagery and big emotions held under the surface. Moebius plays like the director has spent 15 years watching the steadily escalating horrors of the Korean thriller and set out to make a movie that that outdoes them all. What can we do but laugh at the insanity of it all? Contrast the film with Big Bad Wolves from earlier this year, a movie that also went to some awful places but was determined to either lighten the tension or create a different kind of unease by having the characters be jokey. There are no overt jokes in Moebius, but it's still darkly funny. There is a reveal near the film's end that brings together all of the film's threads in a manner that is so outrageous that it would be hilarious if not for the Greek tragedy of the whole thing. There is a logic to the twist that closes the loop emotionally, and while it's insane and kind of horrifying, I found myself nodding my head in agreement. Yes, I thought, that's exactly what needs to happen. I really should keep such things to myself.

Not that the actors give any indication that it's funny or absurd. All three of the leads commit completely to the bit and give performances that are tortured and intense. Lee has a moment during the film's absurdist peak that should be...I don't even know...repellent? Ridiculous? And yet her performance is so filled with pain and (ahem) maternal love that it's incredibly moving. See the film and you'll understand what an accomplishment this is. When you consider that she's playing two completely different characters -- and yet finding the similarities in the (ahem) function they serve -- it's all the more impressive.

The story takes some turns that I can't reconcile (a woman is intimate and possibly falls in love with a man who assaulted her), I'd be lying if I said I didn't appreciate the daring of Moebius. The story is bold, the themes are bold, the choice to leave out dialogue is bold. It's not a masterpiece, but when you see as many movies as I do it's no small feat to make something that stands out, that feels unique and that takes some chances. No movie about castration, rape, incest and deviant sex is going to appeal to everyone, but Kim doesn't make movies for everyone. Like a lot of contemporary Korean cinema, he wants to push the limits of what we can see and talk about on screen. The true achievement of Moeibus is that it's not just cheap exploitation. There is true human drama being explored. But it's as dark a movie as I've seen this year. Consider yourself warned.

Moebius is available for download on iTunes, YouTube, PlayStation, Vudu and Xbox.
Posted by Patrick Bromley at 12:00 PM