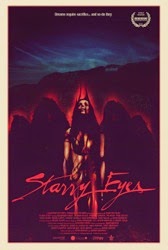 2014 has spoiled us horror fans. We've already gotten a number of excellent indie horror films, among them Proxy, Stage Fright, Almost Human, Willow Creek, The Guest, WolfCop, Suburban Gothic and a few others. Now into that mix comes Starry Eyes, the second narrative feature from writer/directors Kevin Kolsch and Dennis Widmyer; their previous collaboration, Absence, remains unseen by me (though probably not for long). It is an incredibly well-directed film, and on the basis of their work here I will be anxiously waiting to see what they do next. But it's also a movie that tells us where it's going to go and then goes there, conjuring up memories of a number of other horror films along the way. I got hung up on that. I shouldn't have.

Alex Essoe stars as Sarah, a twentysomething would-be actress living in Los Angeles. She supports herself working at a cheesy Hooters-esque restaurant (managed by Pat Healy!) and goes on failed audition after failed audition, mentally and even physically beating herself up each time her efforts come up short. She lives in an apartment complex filled with fellow wannabe actors and directors. Some, like bitchy Erin (Fabianne Therese), are jealous and ultra competitive. Some, like Danny (Noah Segan), are supportive and want to give Sarah work, tired of waiting for someone else to give them the go ahead and looking to make their own movie. One day, she goes in to read for a new horror film called The Silver Scream and, after a particularly humiliating audition, Sarah decides she will do anything to get the part. And that's exactly what happens. 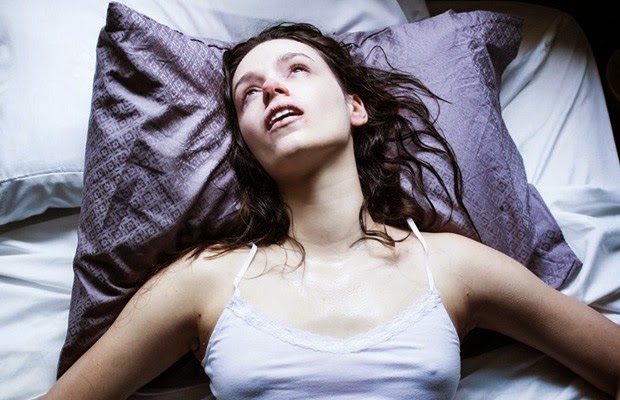 My reactions to Starry Eyes are confusing. As it unfolded, I found myself awestruck by the controlled, assured direction, the brilliant score Jonathan Snipes and the lead performance by Alex Essoe, who does some of the best acting I've seen in a movie this year, horror or otherwise (she probably won't get the proper credit, this being a genre movie). To say she goes for it is an understatement. But the whole time I was watching it, my mind was racing with every other film of which this one reminded me. To name which ones would be a spoiler, so I'll just say that Starry Eyes switches gears every 15 to 30 minutes to become a different horror movie with which we're already familiar, whether it's one from the '60s or one from last year.

Even a derivative movie can still work, and while I was hung up on the "derivative" part upon first seeing the film, I've since come to realize that Starry Eyes works. It's so skillfully made that it could probably overcome any narrative shortcomings, and even those are probably being overstated.
This is the kind of movie that needs to go to crazy dark places we weren't expecting -- and, to be honest, I suspect the filmmakers believe they have done just that. It would impossible to anticipate just how things are going to play out from the way the movie begins, which is to be commended. My problem is that the film insists on telegraphing everything it's going to do; once you know what's coming (and if you've seen enough horror movies, you know exactly what's coming even if you don't know exactly how it's going to get there) the rest of the movie is just a waiting game. 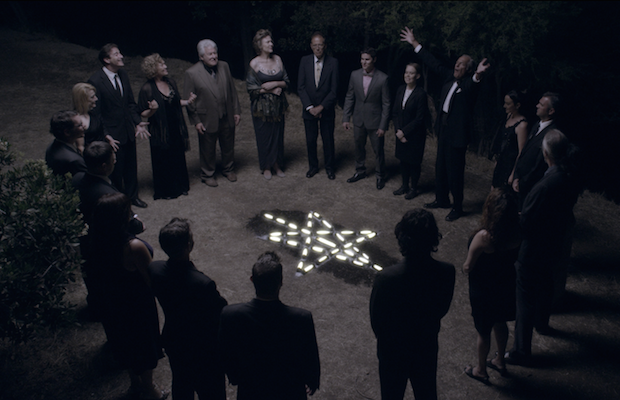 Still, Kolsch and Widmyer make it a hell of a wait. This is a movie that knows how to properly escalate, beginning with the vague sense that something is wrong (Sarah pulls out clumps of her hair to punish herself) before moving on to creepy auditions and meetings with plastic, smiling, predatory producers and finally cutting loose in its last act. There is a nastiness to the violence on display that makes literal the metaphor of Hollywood being a cutthroat business in wet, graphic detail. Plenty of movies have been made about the lengths wannabe actors will go to achieve stardom; this one just takes that to its logical extreme.

Yes, Starry Eyes is unbelievably cynical about the price of fame and the nature of celebrity. The more I thought about it, though, the more I began to realize that it's even more cynical about what the culture does to independent filmmakers. I couldn't say for sure, but I suspect the filmmakers have inserted some very specific and pointed commentary about their own experiences in the industry into their screenplay. To say too much would constitute spoiling certain aspects of the movie, so I'll just say that those looking to circumvent the system -- the ones who aren't willing to play ball -- are rarely rewarded for their noble intentions. Starry Eyes doesn't have a ton of faith in the power of the can-do indie spirit. 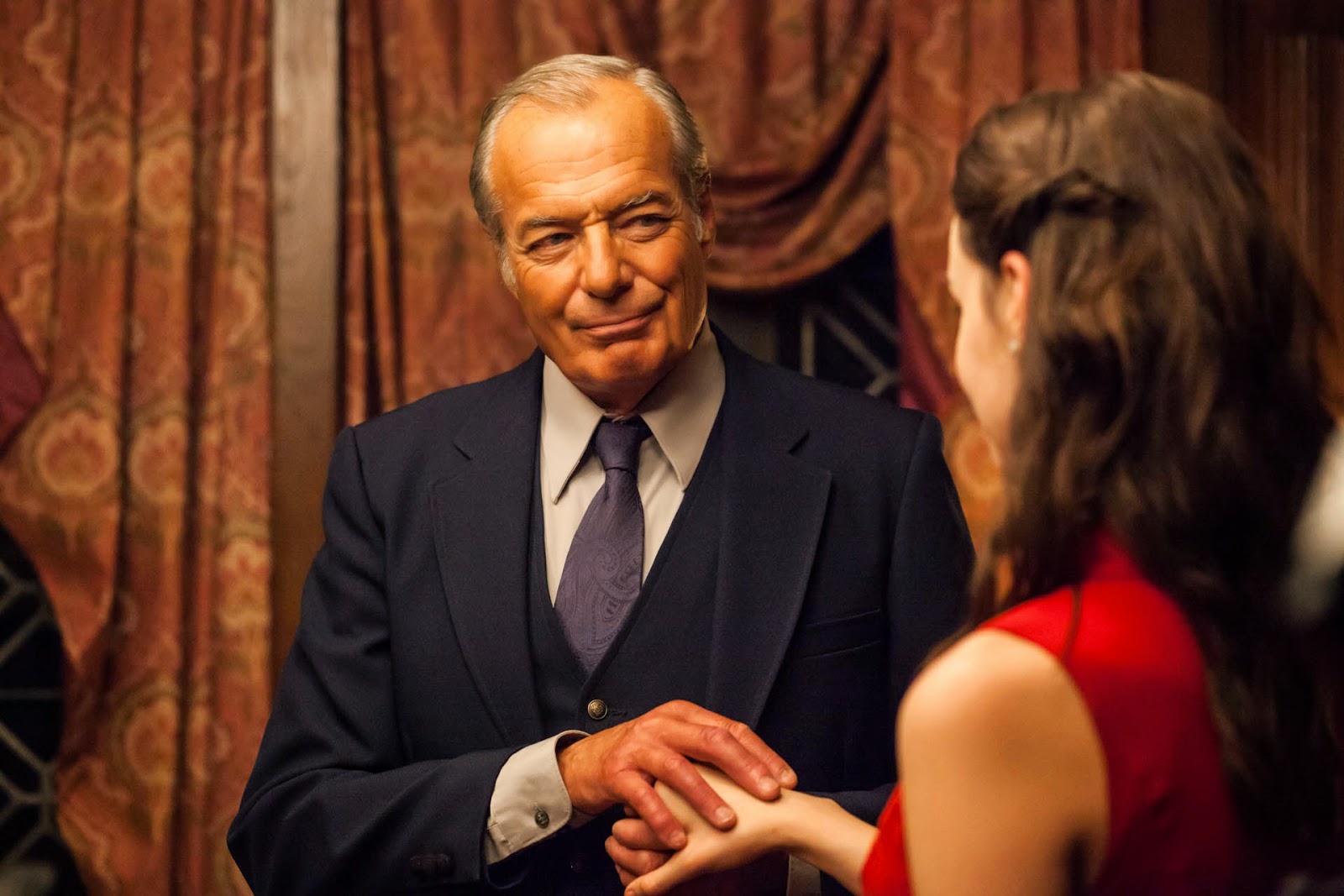 Because the story doesn't contain any real surprises, it's nice that Kolsh and Widmyer still allow their characters to take us off guard. People initially introduced as stereotypes are given unexpected dimension. Pat Healy wears a schlubby mustache as the owner of a Hooters-esque restaurant and is largely played as a fool, yet is given a monologue in which he acknowledges that he knows exactly what his restaurant is, but that it's at least his thing and he wants it to succeed -- should his American dream have any less value because it doesn't result in fame? And is his brand of exploitation all that different than Hollywood's?

Then there is Fabianne Therese, who plays a member of Sarah's social circle and a fellow actress whose every moment of screen time is devoted to making passive aggressive remarks meant to undermine Sarah's confidence. That this person definitely exists in Hollywood is beside the point; she spends most of the movie in a completely one-note role, dependably saying the shittiest thing possible at every opportunity. But late in the film she gets a moment of humanity in which she is no longer in competition for a part, only concerned for a friend, and it reshapes everything that has come before. For as on-the-nose as Starry Eyes can sometimes be about the movie business, I'm glad the filmmakers still managed to fill their world out with real people and not just sitcom cutouts. 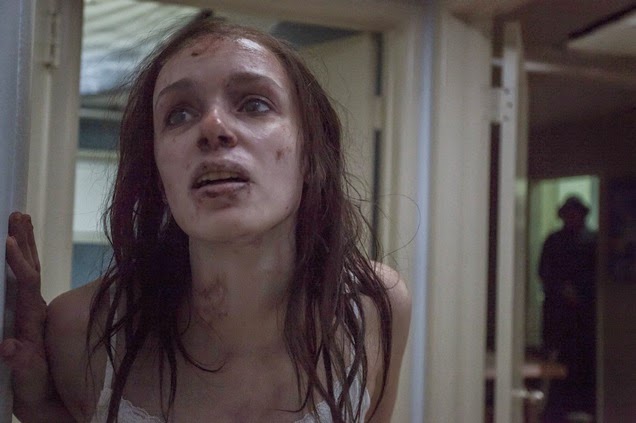 When the lights came up on Starry Eyes, I was conflicted. Yes, it's incredibly well made and effective in the moment, but the story beats are overly familiar and the majority of the third act felt too reminiscent of a horror movie from last year that I really loved. But in the days (and even weeks) since I saw it, the film has stuck with me in ways I didn't predict. If you can get past making a mental checklist of the movie's influences, there's a lot to love in Starry Eyes. The direction is tight and controlled, the photography precise and formalistic in the way that the horror genre does best. It has the one of year's best scores. Alex Essoe one of year's best performances, the kind for which words like "fearless" and "revelatory" are often thrown around as long as it's a prestige picture being discussed. Fuck that. Essoe is fearless and revelatory. There are moments and images in the movie that are impossible to shake. Isn't that what good horror movies are meant to do? To shake us, to haunt us and unsettle us. I didn't realize it at the time, but Starry Eyes was doing exactly that.


Posted by Patrick Bromley at 2:30 PM