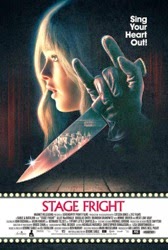 Stage Fright might not be the best horror movie of the last five years, but it's got to be the most fun.

For all the well-known horror/musical hybrids as there are -- a list that includes The Rocky Horror Picture Show, Repo! The Genetic Opera and, my personal favorite, Phantom of the Paradise -- there really aren't very many in the subgenre. In fact, I've already named most of them (others include Sweeney Todd, Little Shop of Horrors, Takashi Miike's Happiness of the Katakuris and Vincent D'Onofrio's Don't Go in the Woods, a movie that needs to fuck off). It's surprising that there aren't more, as the heightened theatricality of so much horror would lend itself well to the musical format. At the same time, the limited number of movies within this subgenre of horror makes it easier to dissect and contextualize: which one is the best? Which one is the worst? The answers are simple(ish) because there aren't that many to choose from.

Which brings us to Stage Fright, the debut feature from writer/director Jerome Sable, a filmmaker who made a name for himself with his 2010 short film "The Legend of Beaver Dam." If you've seen that short, you'll be happy to know there are a lot of similarities between that and Stage Fright: the combination of horror with infectious, up-tempo music, the love of wailing guitar metal, kids in danger, the enthusiastic bloodshed, the fun references to horror movies past, the way it sides with the outcast. Stage Fright is like that short film expanded to feature length. Sign me up for that. 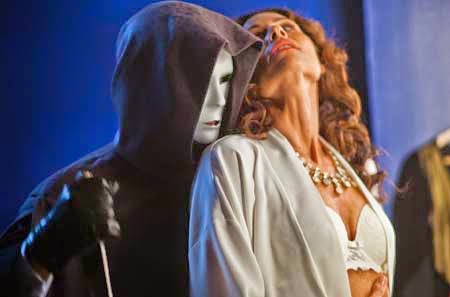 The adorable Allie MacDonald stars as Camilla, a young woman whose mother (Minnie Driver) was brutally murdered on opening night of the Broadway show The Haunting of the Opera 10 years earlier. Raised by her mother's lover Roger (a mustachioed Meat Loaf), Camilla and her brother Buddy (Douglas Smith) get by working as laborers at Roger's failing theater camp. But Camilla dreams of following in her mother's footsteps and being a star of the stage, so when it's announced that the camp will be performing a Kabuki-themed revival of The Haunting of the Opera, she makes sure that she scores an audition against the wishes of both Roger and her brother. To everyone's surprise, Camilla is cast in the lead and quickly has to fight off the lecherous advances of Artie, the show's star and director (played by Brandon Uranowitz). Oh, and a masked murderer is killing off the people in the show.

After an incredible opening that features a brutal, giallo-inspired murder and what is easily the best musical number in the whole film (plus the second appearance of the John Carpenter font in a horror movie this year), Stage Fright has a lot to live up to. It mostly succeeds. Combining the story of a ragtag group of misfits trying to put on a show, a Star is Born-style look at the erosion of a soul in pursuit of theatrical success and a murder mystery, the movie attempts to juggle a lot. Shit, even the kabuki-masked killer gets his own story -- it has to do with his feelings about the theater and it's all sung as a metal song. 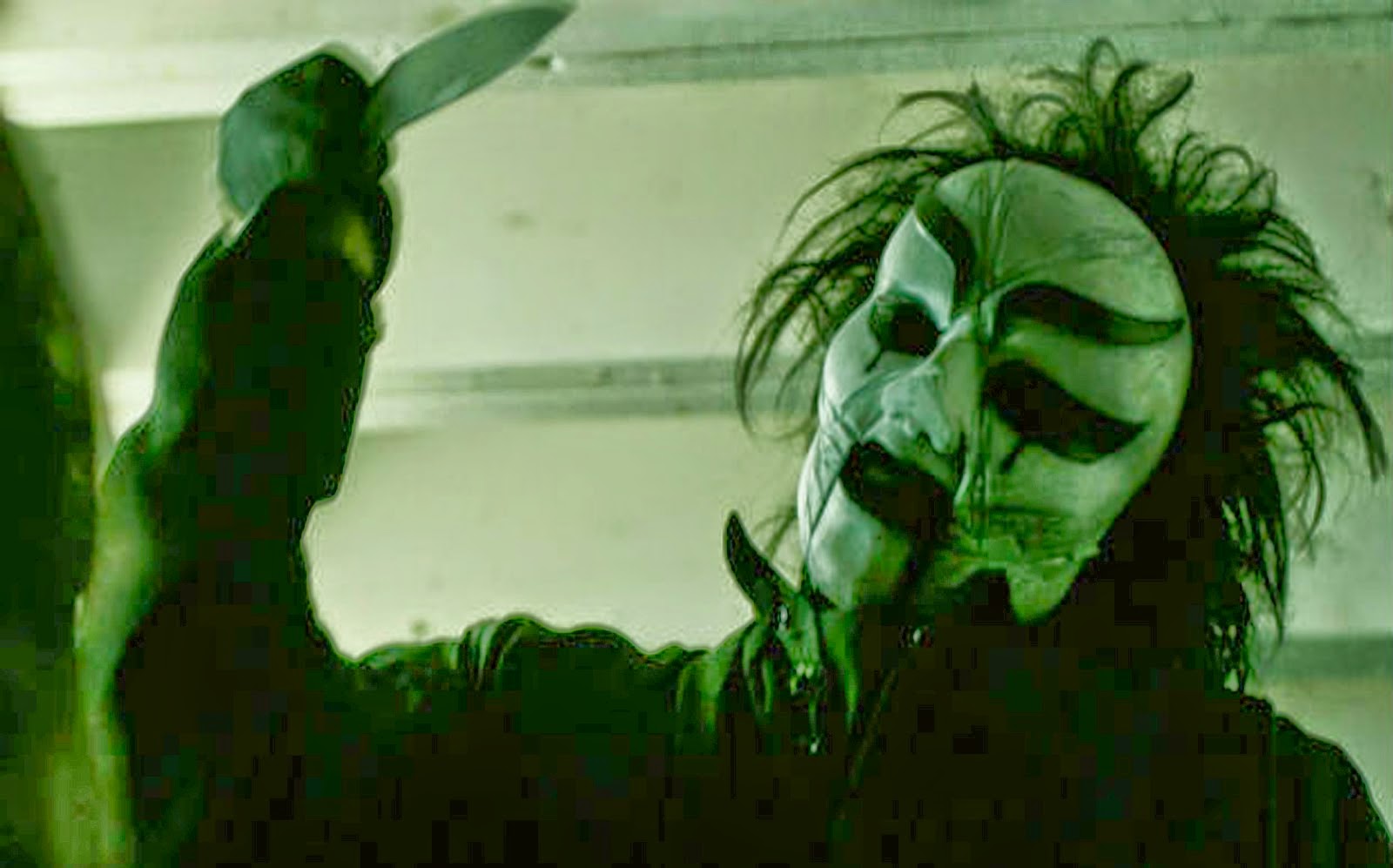 Once things get going, too much of the movie is limited to backstage rehearsals and songs that come from the production; characters rarely break into musical numbers that comment on the action or express their emotions the way they so often do in musicals. So while the film starts and finishes in near-perfect fashion, it sags in the middle. That's disappointing, especially given Sable's talent for composing great songs with clever, funny lyrics. The horror elements are spread a little thin, too. When the movie brings it, it BRINGS IT, but it could have stood to introduce a few more murders into the proceedings. I'm not even suggesting that more of the camp kids be killed off, because I like them too much. I just think that sometimes the movie gets a bit too caught up in the backstage machinations of a theater camp production -- too much Stage, not enough Fright.

There are problems with the movie. I don't really care about any of them. I like the stuff I like too much. I love the setting of a slasher movie at a kids theater camp. I love the way the young actors commit to their characters. I love how funny the movie is without ever being explicitly jokey. It's never scary, but it never wants to be scary. It's too busy being fun to be scary. Stage Fright is constructed with -- if you'll pardon the expression -- such GLEE that it's impossible to resist.

Writer/director Jerome Sable is clearly a former theater nerd and lets his love of 'putting on a show' bleed all over his debut feature (a parallel could be drawn between the theater camp's production and the production of an independent movie). He also loves horror movies, and that love bleeds all over the movie in literal buckets. That means there's a throwaway joke about Friday the 13th coexisting alongside a throwaway joke to the function of the backstage tech crew. Sometimes, the movie seems to be taking the piss out of theater camp. The kids are mostly portrayed as misfits, the material they're performing terrible, their belief in the terrible material unwavering. Sable's heart is still clearly with these kids, though; he studied music at the McGill Conservatory in Quebec and clearly knows this world well. The humor comes in the specificity of the details and the way he teases them with affectionate familiarity. 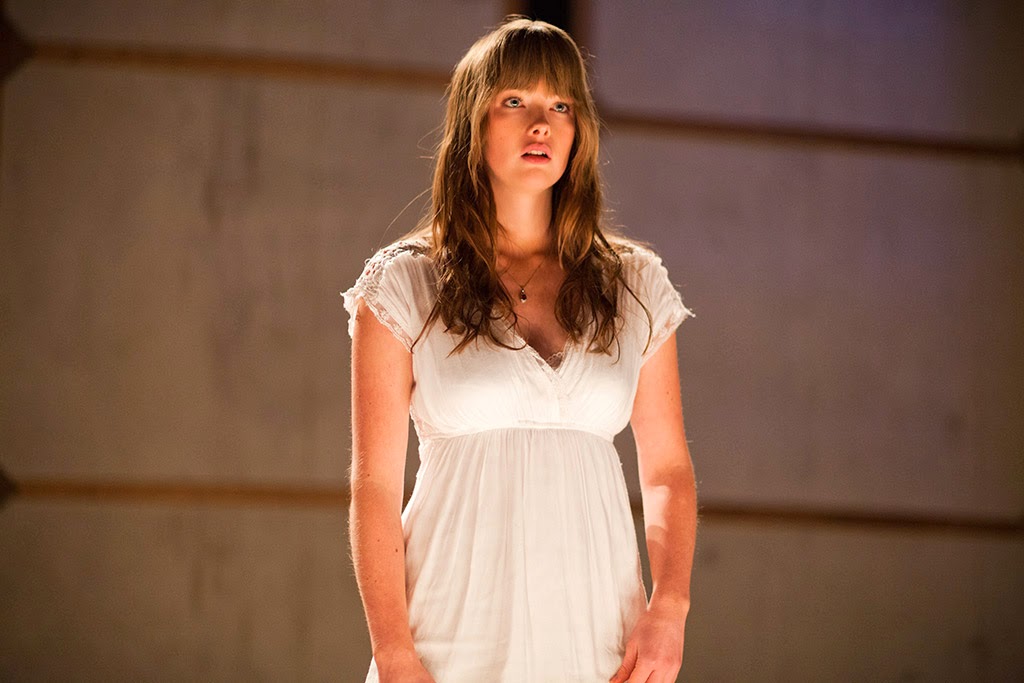 Like so many up and coming horror filmmakers, Sable loves horror and gets a kick out of paying homage to the films that inspired him. Sometimes, it's a heavy-handed and obvious nod to Brian De Palma's Carrie; other times, it's a fun little throwaway reference to The Texas Chain Saw Massacre. The greatest influence on the film, however, is the Italian giallo film; from the mystery of the masked murderer to the over-the-top brutality of the kills, Stage Fright is steeped in the look and feel of that subgenre. Even the poster looks like an '80s giallo.

Stage Fright feels distinguished from almost anything else in horror. The songs probably help, but so does the setting and the energy with which Sable stages everything. I can't wait to program my 24-hour horror marathon in October, because Stage Fright is definitely getting a spot. It's the perfect movie to break up the monotony of a marathon -- it's incredibly entertaining, very much its own movie and still delivers the goods when it comes to the horror (the gore is over the top in the best way). While Stage Fright is never going to be my favorite musical horror -- Phantom of the Paradise cannot be topped -- it definitely earns a spot near the top of the list. I smiled the whole way through and wanted to watch it again as soon as it ended. This movie is too much bloody fun. 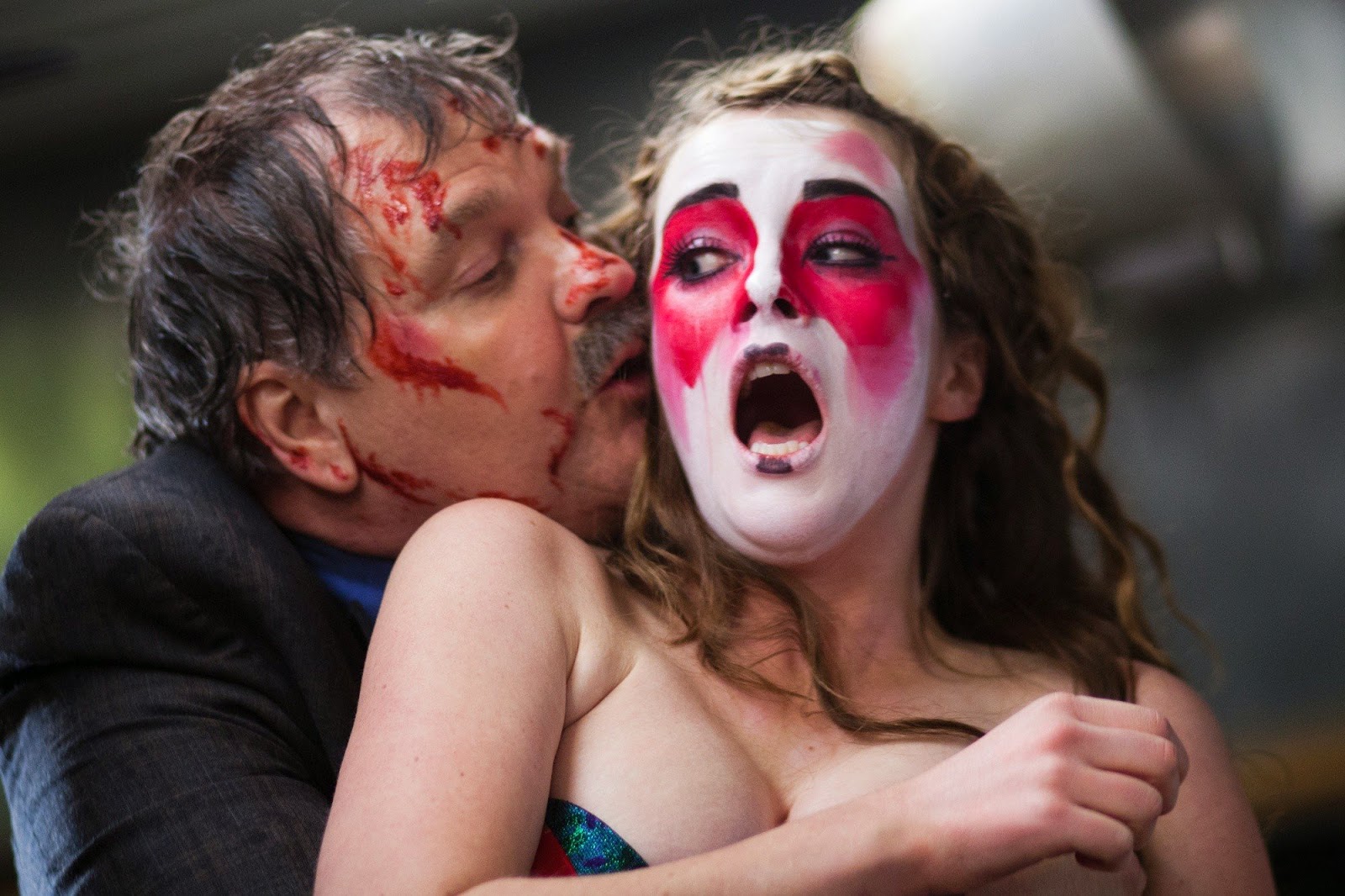 Posted by Patrick Bromley at 7:41 AM