Oh, I cannot tell you what this film meant to me when I was thirteen...

I was first introduced to The Who's rock opera, Tommy, on an uncharacteristic trip to Wisconsin with my father. Seems Dad was going to the University of Wisconsin at Madison for a business seminar; he decided to take me with him. Why did he do that? I missed school for three days. The mind boggles. Did my mother not trust him in Wisconsin alone? I sometimes think I only dreamt this; clearly, I did not. He attended workshops during the day, leaving eighth-grade me hours and hours to roam around Madison, Wisconsin unescorted. It was there I bought The Who's Tommy in a hole-in-the-wall college town record shop. (This was the concept album performed by The Who and originally released in 1969, not the movie soundtrack.) I lay in my bedroom and listened to that album more than any other record album before or since. I had a lot of free time when I was twelve. (In high school, many of my friends would have a similar reaction to the album Pink Floyd The Wall. They discovered it, dove into it, it became their only religion, and they were never heard from again.) 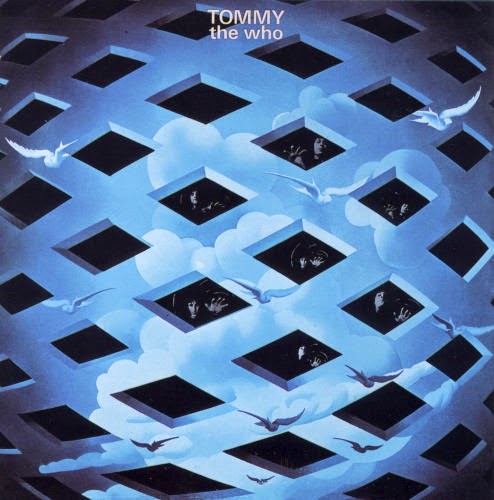 I once mentioned Tommy in passing to a friend, and my eight-grade science teacher, Mr. Donoghue, overheard me. He began to loudly sing, "See Me, Feel Me, Touch Me" (a song from the album--he wasn't being untoward, though it was a Catholic school) to show his familiarity with it. I was shocked. How could an ADULT be familiar with the special object of my affection? I loved Tommy so much, I thought I was the only one.

The Bally "Wizard!" pinball machine, which was inspired by the album, was my favorite. I spent an insane amount of my wayward youth playing pinball. Most nights out with friends in high school meant aimlessly driving around until we thought up something to do; usually, that "something to do" meant either going to the movies or to a disreputable establishment called "Hotter Than Mothers" to breath in second-hand cigarette smoke and to play pinball, video games, and the jukebox.

The album went finally hit the big screen, and Tommy: The Movie was a huge deal in the summer of 1975. I saw it dozens of times. The movie version is WAY OVER THE TOP; every performance is in capital letters. I had never heard a movie so loud, thanks to Tommy's pioneering use of Quintaphonic sound. Theaters wishing to show Tommy during its first run had to pony up for what was then a brand new sound system. Quintaphonic sound consisted of a center channel speaker with standard left and right stereo speakers in front of the theater and rear-channel left and right surround speakers in the back -- plus a subwoofer. Five speakers -- QUINTAPHONIC SOUND!

Sounds a lot like modern 5.1 surround sound, doesn't it? Thanks, movies! 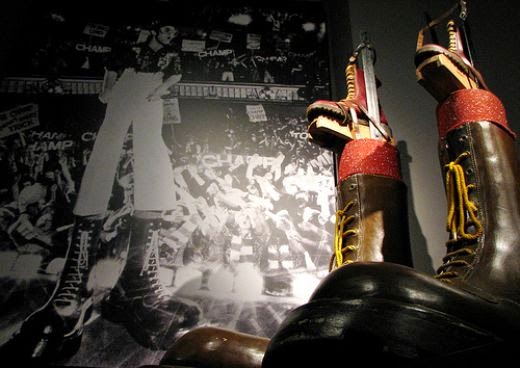 When I was thirteen, I wanted Elton John's boots -- the boots he wears in the film during the "Pinball Wizard" number. I coveted these boots, and I am straight. I was sad to learn that, twelve years later, when Elton John auctioned off 2000 items from his personal wardrobe at Sotheby's to benefit his AIDS charity -- including that awesome pair of "Pinball Wizard" boots. R Griggs, the makers of Dr Martens, made the winning bid, damn them! The famous pair of boots is currently on loan to the Northampton Museum.

When I was in high school, my district hosted an annual Film Day. Film Day my junior year featured a screening of Tommy. The school hosting Film Day that year had a YCT (a Young, Cool Teacher) named Lyon Trainor. THAT WAS HIS REAL NAME.  I think it was Trainor who turned up Tommy really loud that day -- take that, Establishment! I'll never forget the experience of watching that bombastic film with a bunch of my friends and peers and at least one adult rebel, who GOT IT. That screening was the first time in my life I ever experienced a leg cramp. I didn't even give a shit - I was too busy being Part Of Something Intense. 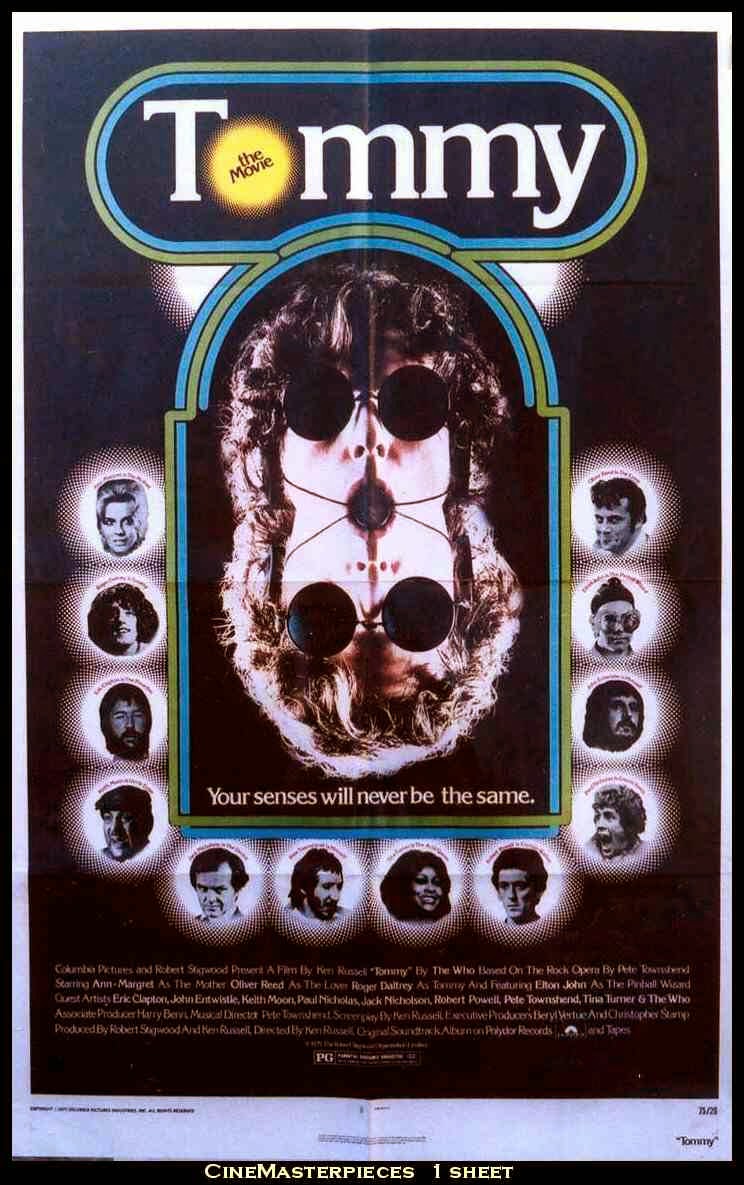 The Plot in Some Detail: Captain Walker (Robert Powell) flies off to fight in World War II, leaving his pregnant wife, Nora (Ann Margret) to fend for herself. He promptly dies. She gives birth to Tommy and hooks up with a shady character named Frank Hobbs (Oliver Reed). Frank and Nora marry, but on their honeymoon night, Captain Walker returns and is understandably upset. Frank kills him, and Tommy sees the whole thing. Frank and Nora scream that "he didn't hear it, he didn't see it, and he won't say nothing to no-one ever in his life." Tommy is thereby rendered deaf, dumb, and blind.

Flash forward a few years, and awful parents Frank and Nora leave now-teenaged Tommy (Roger Daltry) in the care of an increasingly irresponsible series of minders: The Acid Queen (Tina Turner), Cousin Kevin (Paul Nicholas), and Uncle Ernie (Keith Moon), all of whom abuse him. Somehow from this abuse and confusion, Tommy becomes really good at pinball. (HE JUST DOES.) 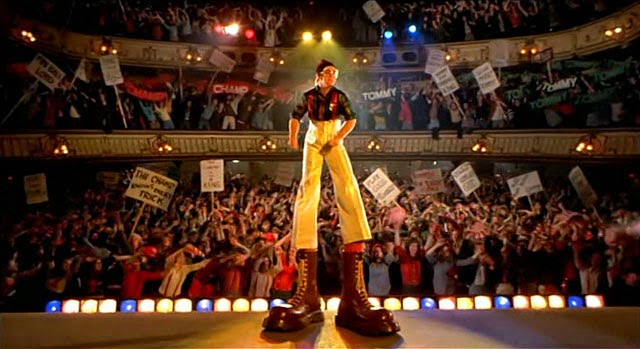 Tommy defeats the Champ (Elton John) and becomes pinball wizard. He ponies his newfound fame and riches into what can only be described as a religion. He welcomes all people to his new retreat/holiday camp, but they quickly become disillusioned on the road to enlightenment. They riot, kill Tommy's parents, and burn down the camp. Tommy escapes, swims a river, climbs a mountain, returns to the place of his conception, and is transformed into a ball of light. Oh, did I mention? All the dialogue is sung (loudly), because OPERA.

That's about it. This is the kind of storytelling that made my thirteen year-old head explode.

I would think that readers unfamiliar with musicals would want to see Tommy solely because of the cast: Ann-Margret, Oliver Reed (who sings!), Eric Clapton, Tina Turner, Keith Moon, Elton John, Jack Nicholson (who sings!), and Cher.

Okay, I just made up that last bit about Cher, but she would fit in this film perfectly. 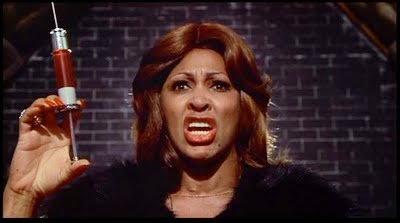 We can use the Richard Dyer system of musical categories we learned about in this column two weeks ago to make larger critical observations about Tommy as a musical. As the invention of Quintaphonic sound suggests, Tommy: The Movie is all about intensity. The film contains about 27 musical numbers (it is an opera, after all) and 12 fall into the category of Intensity: "Captain Walker/It's A Boy," "What About The Boy?," "Amazing Journey," "The Acid Queen," "Cousin Kevin," "Fiddle About," "Pinball Wizard," "Smash The Mirror," "I'm Free," "Sensation," "We're Not Going To Take It," and "See Me Feel Me/Listening to You." This leaves the other four categories to DIVIDE the remaining fifteen numbers.

Perhaps this has something to do with the fact that the original album was conceived as a performance piece for the band during its rock concerts. We are faced here with a musical "chicken or the egg?" conundrum. Did director Ken Russell recognize the essential excess of the material and design and direct the film accordingly, or is this INTENSITY only a gloss that the director himself laved on the original work? Russell does manage to find the cinematic equivalent of the band's manic stage energy. The Who (as a band) is over the top, what with Pete Townsend's windmill arm and Roger Daltry's spinning lariat microphone cord and Moon's lunatic abandon on the drums and love of explosions. The fact that this is also an opera demands a heightened reality, a special reality that can hold these all of the big emotions.

My students' reaction to Tommy now is telling. They are not used to subjects such as child abuse and bullying being treated with a heavy dose of irony, so they can't quite believe it when Cousin Kevin's mistreatment of Tommy (he throws the deaf, dumb, and blind boy down steps, simulates drowning, burns him with cigarettes, etc...) is treated as burlesque. What can I tell them? The 1970s were an ugly time. I know -- I was there. 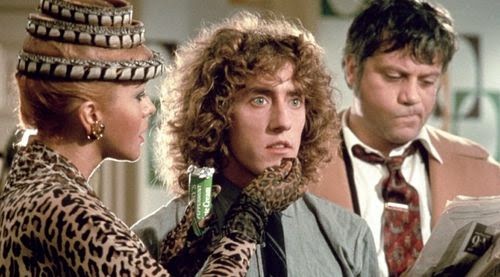 As an adult I now enjoy the larger conceptual touches that Russell and his team bring to the party:  the First Church of Marilyn Monroe, with priest Eric Clapton's proclaiming the famous actress to be Savior; the colorful yet somehow still drab recreation of England in the late 1950s; Ann-Margret rolling around in soapsuds, chocolate, and baked beans in the musical number "Champagne;" and Sally Simpson's Frankenstein boyfriend who, at the end of her eponymous musical number, marries her -- making her the Bride of Frankenstein, I guess.

The legacy of Tommy is rich and interesting. I still love it, though in a very different way than my thirteen year-old self did. My short-lived obsession with The Who wound up being my "gateway drug" into another English band some of you may have heard of... the Beatles.
Posted by Patrick Bromley at 12:03 PM