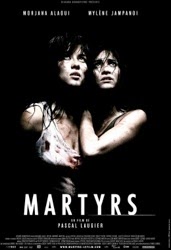 Martyrs is a very good movie that I don't ever want to see again.

I've mentioned a few times on the site that I tend to avoid movies that are part of the contemporary "extreme" movement in horror -- titles like A Serbian Film, Inside, Frontiere(s) and 2008's Martyrs. I do this because as much as I love horror, I'm a real pussy when it comes to things that will legitimately upset me. There are images I don't want in my head. It's never the outlandish stuff, either; I can handle any number of exploding heads or three people being sewn together ass-to-mouth (I can remember what it's like to be 8 years old again), but have a very low tolerance for anything that feels real-world. I don't dig on pain and suffering and extreme violence that exists to show just how far makeup effects have come in depicting the most graphic and realistic vivisections one could ever hope to (not) see. And because even the die-hard horror fans I know and/or follow online have suggested that some of these extreme movies are just that -- extreme -- I've put off ever seeing one.

Well, regular reader and friend of the site Sol Ott called my bluff and asked me not just to watch Martyrs -- one such movie from the "new extremism" movement -- for an "I'll Watch Anything" column, but even offered to send me his Blu-ray copy of the movie (hear that, F-Heads? The bar has been RAISED). I would have done it because it's Sol Ott and we love him, but the fact that he made it so easy for me (and was so generous) made it impossible for me to turn down. The challenge was accepted. I would indeed finally see Martyrs.

And then I did something stupid. I watched the movie months ago and never got around to writing about it, which means that in order to write this "I'll Watch Anything!" for #ScaryMovieMonth I had to watch Martyrs AGAIN. How did I go from wanting to never see it to now seeing the fucking thing twice? I'm like a martyr for Martyrs. 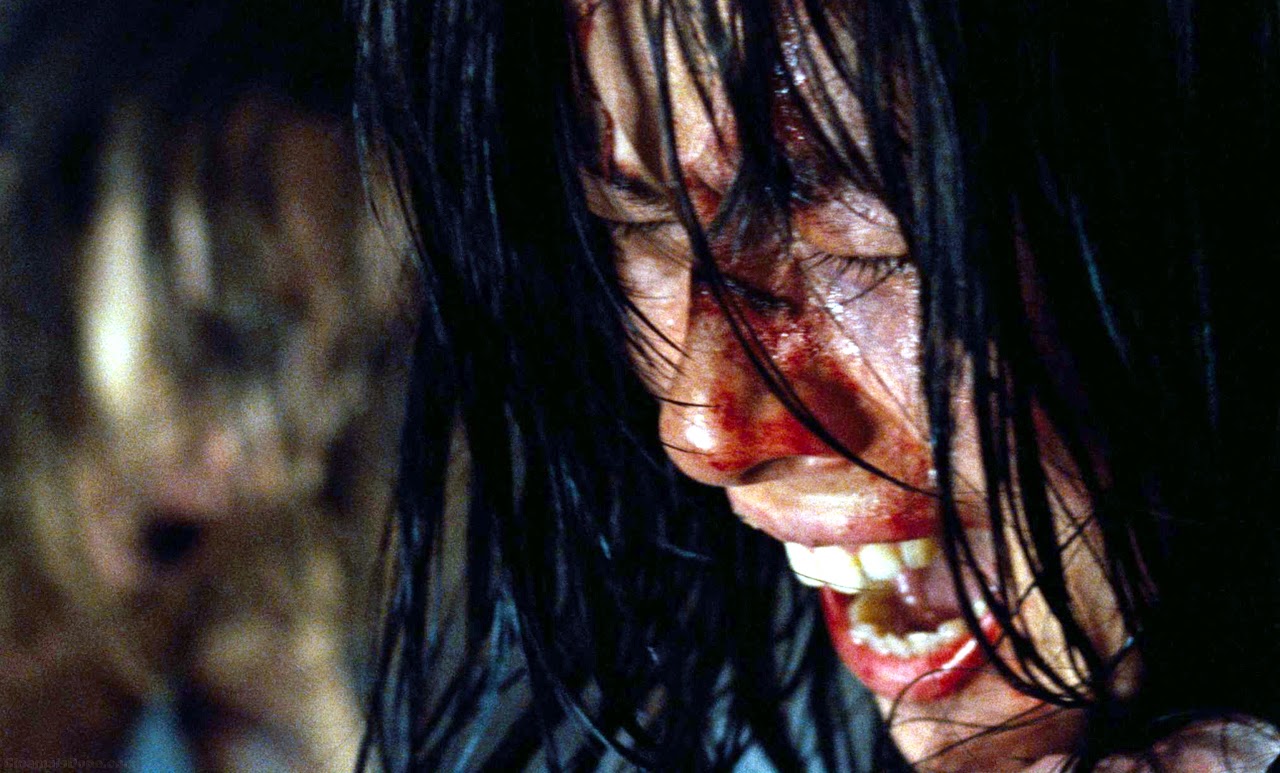 Lucie (Mylène Jampanï) and Anna (Morjana Alaoui) are best friends -- practically sisters -- who grew up together in an orphanage. Lucie previously escaped horrible mental and physical abuse at the hands of unknown tormentors and is now haunted by what she claims is a scarred woman who terrorizes her and physically assaults her. Cut to 15 years later: Lucie, believing she has found the people responsible for abusing her, bursts into a house and murders the family living there. She asks Anna for help disposing of the bodies; once there, Anna bears witness as Lucie is repeatedly "attacked" by the scarred woman. And then shit starts to get even more terrible.

I don't want to say any more about the plot of Martyrs, because even reading that bit of summary will already tell you more about the movie than I knew going in. And Martyrs is not a film that follows any sort of conventional storytelling structure, meaning the less you know going in, the better.

Ah, but there's that word "better," as though I'm saying you'll like and should see Martyrs. And I don't know that I'm saying that.

The film is very effective. Two-thirds of it are genuinely terrifying, albeit in very different ways. The last third is disturbing and upsetting. The movie has a lot of ideas. Some of them work, while some of them are ambiguous to the point of pretense. Writer/director Pascal Laugier was either overly ambitious in what he wants to say or else knew that he left certain things open-ended enough, the audience would fill in the gaps not so much with answers as with assumptions of depth -- it's clearly thoughtful and important because we don't quite get it. Having seen the movie twice now, I still can't decide where the truth lies. 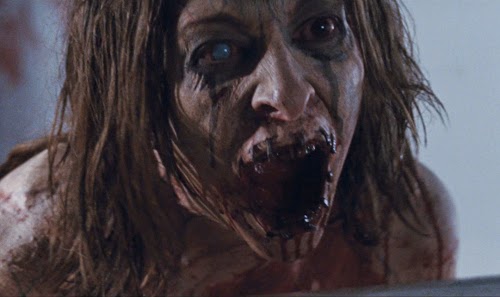 But back to the good. It is an exceptionally well-made movie: beautifully photographed, even at its most vicious. The performances by the two lead girls are strong, informed by a lifetime of pain and fear. The practical effects are nightmarish. Much of the movie is nightmarish, really, from the brutal terror of a home invasion to the monstrous woman that only Lucie can see -- which, it just so happens, is one of the scariest things I've ever seen in a movie. Even as Martyrs begins to shift into its own version of a monster movie, I was on board. A lot of it was unpleasant, sure, but sometimes the job of a horror movie is to actually horrify. At this, Martyrs is incredibly successful.

It's when the movie shifts into something else entirely that I think it loses its way and becomes the film I feared it would be. Again, I prefer to talk around the specifics, so I'll just say that the movie finds a new way to be unrelentingly dark and painful in its last half hour. This is the section where Laugier's thesis is supposed to come together -- it's what everything has been building towards -- but it might be an example of a cake-and-eat-it scenario, wherein Martyrs tries to condemn that which it lingers on scene after scene. I suppose that's the point. Laugier is rubbing our noses in a kind of ugliness in an effort to achieve a higher understanding about violence and suffering. It's the kind of thing I can get behind in theory, but the way the film gets there makes it very difficult for me to argue that it's successful in practice. 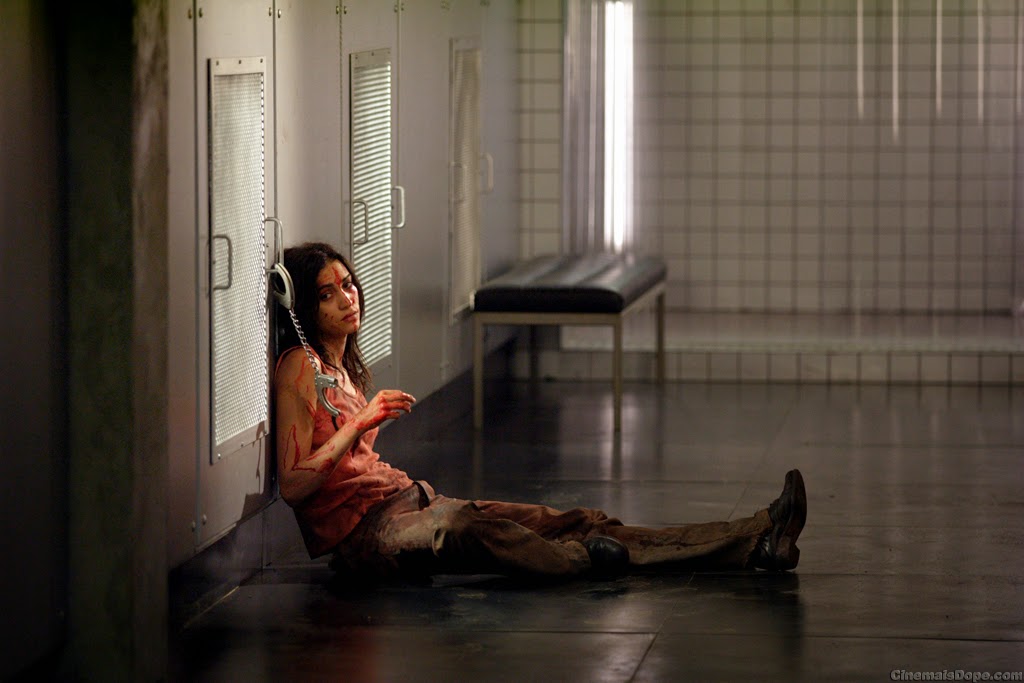 But then maybe Laugier is just using Martyrs as a way of critiquing the treatment of women in the horror genre. In this, he is more successful. The two girls spend their entire lives fighting against a system that wants to brutalize and victimize them for their own selfish gains -- it's not exactly entertainment, but it might as well be. Reading the film this way makes it stronger because it gives focus to the central metaphor. Again, does it make me "like" the movie more? I don't know. Maybe. It's not an easy movie to like. Appreciate, sure. Be affected by? Of course. But I'm more likely to throw on a Friday the 13th sequel than I am to ever feel like watching Martyrs again. At least Jason Voorhees doesn't make me feel bad for liking horror, even if Pascal Laugier's points are well taken.

Ultimately, I'm glad to have seen the movie (even twice). I appreciate Sol Ott going to bat for it and understand what it is that he sees in it. If it exists to flaunt gratuitous violence for its own sake, it hides it well. Martyrs plays like a tour through horror in the 2000s: there's home invasion, there's monster/haunting stuff reminiscent of J-horror and there's "torture porn," ( a label I don't like) or the ultimate critique thereof. It's skillfully made, even beautiful at times, and it's the type of film that sticks in both the brain and the gut for days after seeing it. It's unshakeable.