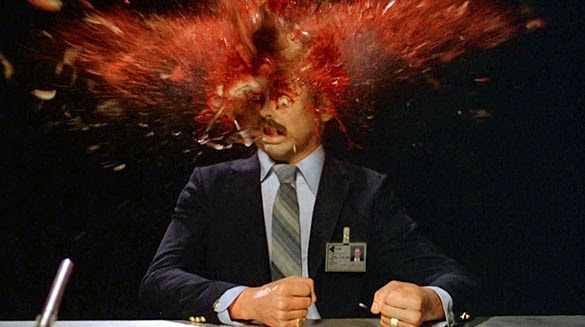 Get ready for a surprise!

Jesus, that's violent -- even in 2014. Darryl Revok (a hirsute Michael Ironside) is a dangerous, rogue "scanner" (i.e., a person with unusual telepathic powers BUTYOUALREADYKNEWTHAT). He has declared war on ConSec, a weapons and security systems company, and exercises his formidable telekinetic prowess at the debut of ConSec's scanner program before representatives from various intelligence agencies. Master make-up artist Dick Smith (The Exorcist) created the effect by filling a prosthetic head with livers, and shooting it from behind with a shotgun. And ... boom goes the MIND-amite. 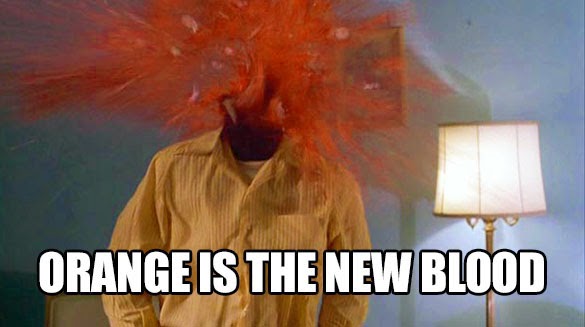 This is violent too! Early in George A. Romero's horror "masterpiece," a SWAT team raids a housing project because they're ... looking for zombies? Punishing residents for not delivering their dead to National Guardsmen? Sure, whatever. In the scrum, an overzealous (read: racist) cop busts down a door and removes the head of an innocent bystander (read: unarmed black civilian). To simulate the exploding head, Tom Savini and his eight-man crew sculpted a realistic false head, and filled it with bags of blood, pasta, chips and fruit cores. The fake head was put on top of life-size dummy (nicknamed "Boris"), and Savini shot it with a 12-gauge shotgun.

Honestly, I don't know what I was thinking (I mean, should a human skull being brutally torn apart NOT be violent?), but I'm starting to regret this list. This is another Tom Savini effect (the God of Gore), and he actually plays the man getting his head blown off (presumably because he had already made a prosthetic cast of his own noggin). The dummy (upon which the fake head is placed) is actually the same "Boris" from Dawn of the Dead, filmed two years earlier. Fun(?) piece of trivia: Gene Siskel was so disgusted by this scene that he walked out of the movie.

The head explosion here is gruesome, sure, but it's not nearly as horrific as the previous three examples because a.) this is a campy, exploitative B-movie (originally titled Killbots), b.) the victim is an annoying, underwear-clad trollop, and c.) the villain is a public-access TV robot (let's call him "Ralph"). 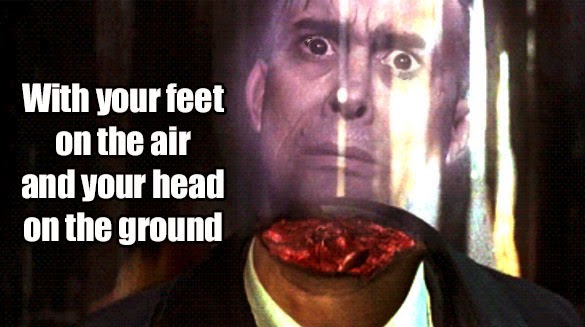 It's the mid-'90s, so that can only mean one thing -- bad CGI. Remember when Peter Jackson was your favorite horror-loving weirdo from New Zealand? Before The Lord of the Rings series (but after the GREAT Dead Alive), Jackson's first big-budget Hollywood movie was 1996's The Frighteners, starring Michael J. Fox. In this scene, Milton Dammers (Jeffrey Combs, he of Re-Animator fame) gets his head blown off, only to be instantly replaced with ... GHOST HEAD. 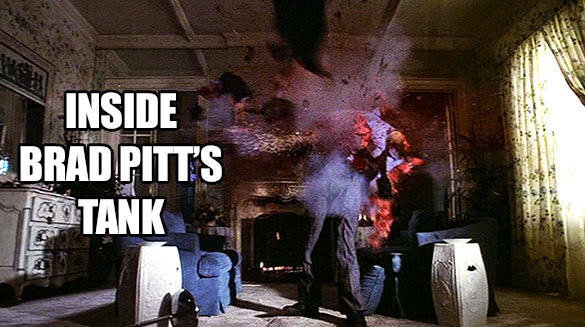 Gillian Bellaver (Amy Irving) explodes Ben Childress' (John Cassavetes) head (plus the rest of his body) in this film's memorable ending. Surprisingly (at least, to me), this film is NOT about fictional anthropomorphic animal characters with human personalities. 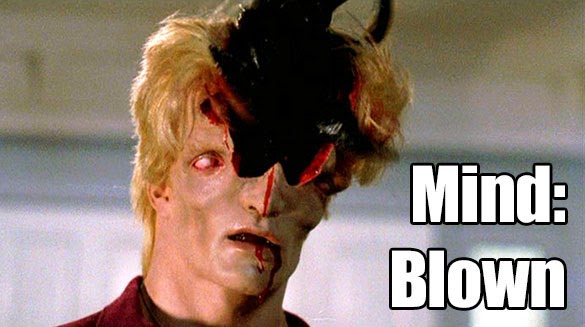 This awesome Fred Dekker movie from the '80s has lots of head trauma. First, a reanimated frozen corpse's head splits open and releases parasitic brain-incubating space slugs. Called to the scene, Detective Ray Cameron (Tom Atkins) finds the body, and erroneously decides the wound is the result of an axe to the face. Later, Cameron blows off the same corpse's head with his shotgun, which releases more slugs. An alternate ending to the film (not shown theatrically, but largely considered to be the "original" conclusion, thus setting up a sequel), shows a zombified Cameron collapsing to the ground. His head explodes, and slugs escape to a cemetery. Just then, a spaceship (first seen in the beginning of the movie) returns, with the aliens intending to retrieve their slug experiment. 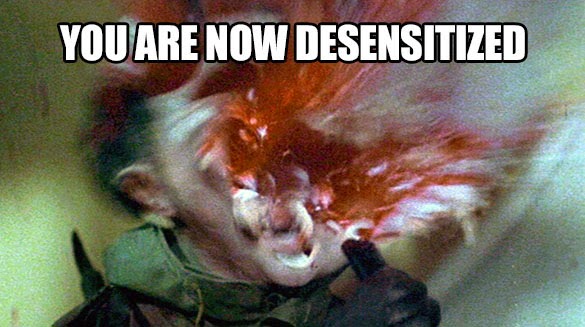 It's all starting to look the same, right?
Posted by Patrick Bromley at 6:00 AM