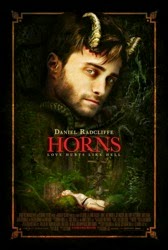 I can only assume the devil made them do it.

Alexandre Aja's newest film Horns is a mess bordering on disaster -- the kind that can only happen when talented people are involved but have no idea what movie they're making. With a good cast, a director who has made some movies I like (and some I don't) and a celebrated novel as its source material, how did the movie go this wrong?

I have not read Horns, the cult novel by Joe Hill, son of my beloved Stephen King and an accomplished author in his own right. Maybe the book is a confused, muddled mess that can't ever decide what it wants to be. The movie certainly is. Maybe its main character is a shadow of a three-dimensional person, existing only to a) be sad about his girlfriend that he loved MORE THAN ANYTHING and b) grow horns so he can be the devil. Nothing more about him is known. Maybe the book never answers the central question of why, after losing his girlfriend, does an innocent, by all accounts decent man turn into the devil?

Daniel Radcliffe stars as Ignatius "Ig" Parrish (ugh), a young man desperately in love with Juno Temple's Merrin (double ugh). They have the kind of love where they lay around on blankets in the woods staring at each other. Sometimes Merrin waits for magic hour and then dances around in the window of a tree house while Ig watches, mostly so that he can later remember what it looked like when he got to watch her dancing around in the sunlight, sometimes lifting her dress a little because that's what girls do in movies and tampon commercials. Well, Merrin is dead (that's not a spoiler; she's dead when the movie starts), and the whole town is grieving her because she was special and everyone loved her not for any reason that's ever demonstrated in the film, but just because everyone tells us she was special and she's played by Juno Temple and we'll just have to take it on faith. Merrin was found murdered in the woods after having a public argument with Ig, so everyone assumes he killed her -- including his family (Kathleen Quinlan, James Remar and Joe Anderson) and his best friend Lee (Max Mingella). What a bunch of muggles. 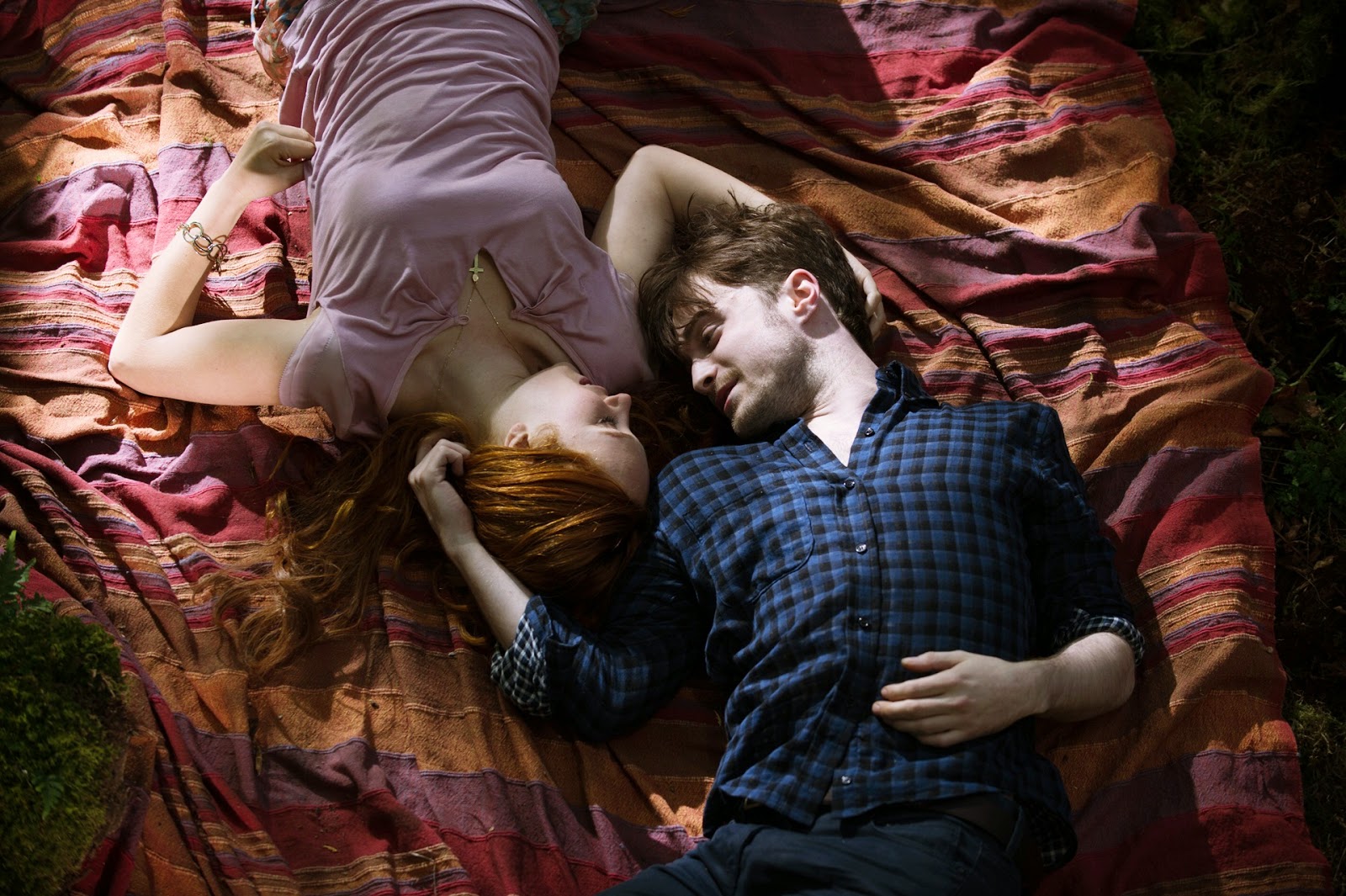 One morning after getting drunk and pissing on the memorial for Merrin, Ig wakes up to find he has grown horns. They're small at first, but they're there. And they come with special powers: when he's around anyone, they begin to confess their darkest secrets to him. Sometimes when he touches people, he can see their memories. That only happens when it's convenient (or to some sex to get a laugh). So now Ig is the devil and uses his powers to find the truth about who killed Merrin. No prizes will be awarded for guessing the identity of the murderer correctly, especially if you have ever seen a movie before.

Hill did not adapt his own novel for the movie version; that job fell to Keith Bunan, a writer whose only other credits include several episodes of the acclaimed HBO series In Treatment. Having not read the book, I can't say if the problems of the movie were present in Hill's novel or if they're issues of translation. Maybe it's a bad adaptation. Maybe it's a case of stuff working in print that won't work on film. We live in a weird time now, in which fidelity to source material takes precedence over what's appropriate for the form. If Hill's novel had the same tonal confusion and sloppy plotting as this movie, it should have been the job of Bunan and Aja to fix those issues. If the book worked as it was, someone fucked up in making it into a movie.

What is Horns? Is it a horror movie? A black comedy? A mopey indie drama? A mystery? It's all of these things, but not in that good way where a movie works as a whole bunch of different genres because the filmmakers know what they're doing. This one shifts gears not as a choice, but because Aja is never able to get a handle on the tone. It's a different movie in every scene, making up its rules as it goes, never even really deciding on what story it wants to tell. It is, as its core, a murder mystery. Ok, fine. How does the supernatural angle really factor in? The horns aren't a metaphor, and Ig's (ugh) journey isn't representative of some larger story. Maybe there's something to the idea that a town full of people judging Ig for doing something horrible are all hypocrites, hiding their own dark secrets and desires, but that's a bit of a reach. Besides, it doesn't address why Ig is "chosen" to be the messenger. 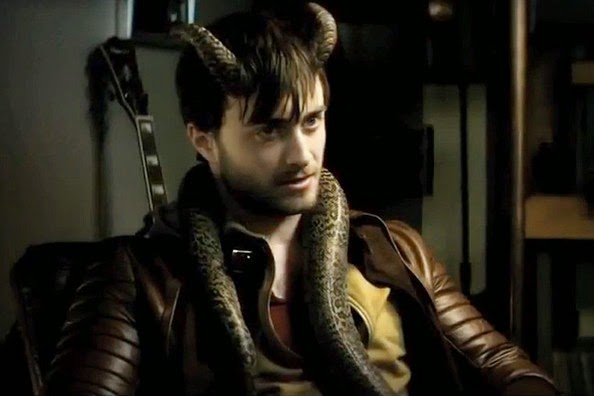 I blame Aja. While I can respect the fact that he's trying to branch out and "grow" as a filmmaker with Horns, the movie that he's trying to make might just be too far out of his reach. His talents are best suited for exploitation -- nasty/funny movies like Piranha 3D or nasty/nasty movies like High Tension. There's a trashiness to his sensibilities that works for those films, but when he tries to class it up in a movie like Horns it becomes clear that he just has bad taste. Watching Radcliffe walk out of a burning building in slow motion while Marilyn Manson's cover of "Personal Jesus" plays on the soundtrack, it's hard to think about anything but the terrible choices Aja is making. At one point (MINOR SPOILERS) a character is killed off and the moment should matter; instead, the over-the-top gore and the fact that another character laughs turns it into all into a joke. Since the entire movie is about how a death devastates an entire town, it makes no sense to turn one of the few (only?) other onscreen deaths as a stupid gag.

The movie is full of bad choices like that. The serious moments feel artificial, informed only by other movies. The comic moments a) aren't funny and b) are often dependent on cheap beats that are supposed to be "shocking," like an interracial sex scene (which is not inherently funny, but see the movie and you'll understand it's clearly meant to get a laugh) or people being mean to kids or gay panic jokes. You know, hilarious things. The romance isn't meaningful because it doesn't take place between two people, just two placeholders from a 1999 indie rock album cover. 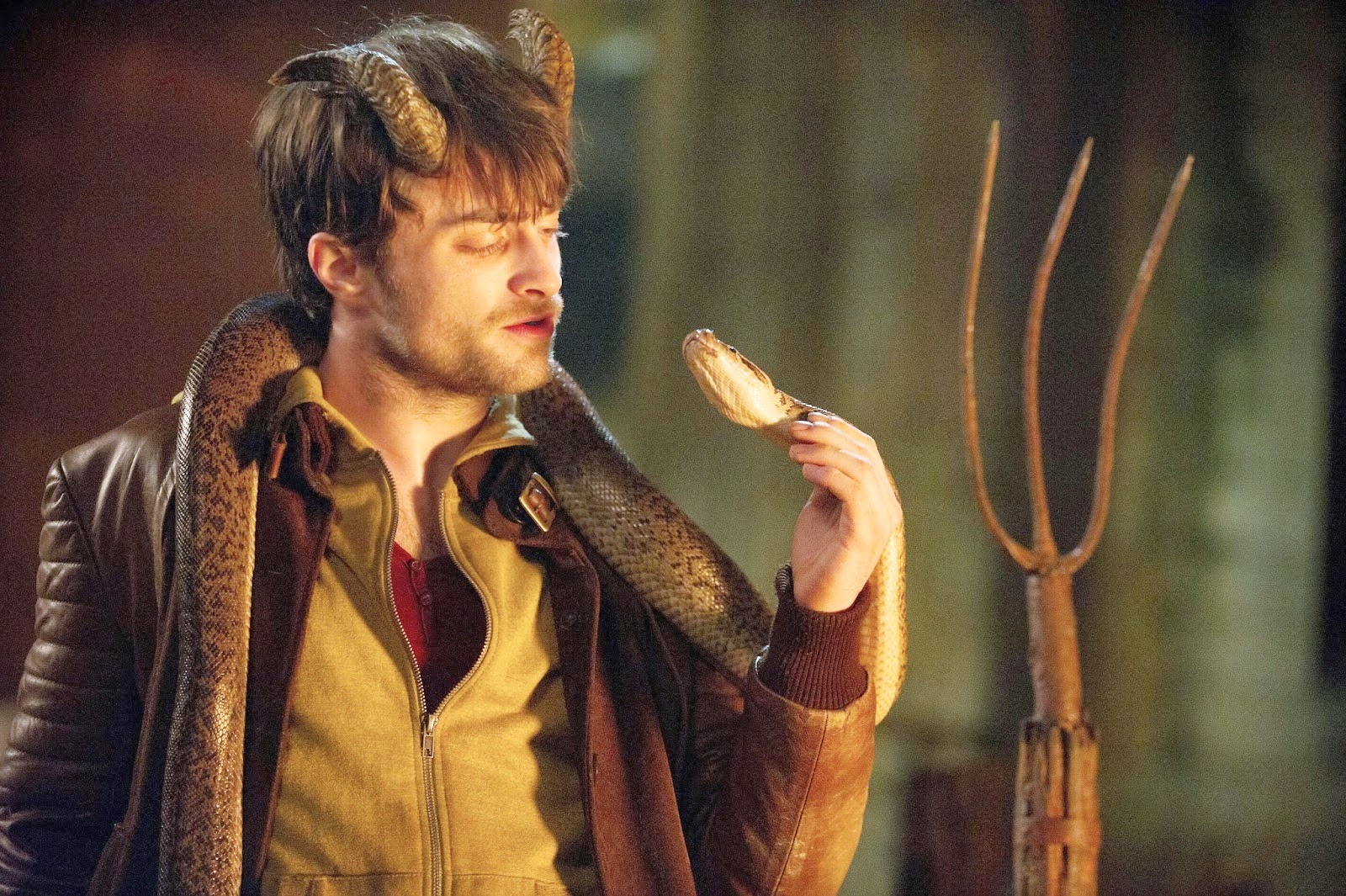 Radcliffe does his best, occasionally tapping into the wounded anger Ig (ugh) is feeling. While he's out of his depth at times, I'm not even sure it's his fault -- he doesn't know what to play because he doesn't know what movie he's in at any given moment. Still, he has a tendency to underplay some of the more emotional moments (when he isn't just screaming and swearing), which is effective when he's working opposite a cast that uses the "confessional" aspect of the story as a license to go very, very big. Nowhere is this more evident than with Heather Graham, who makes a welcome return to movies and then gives one of the worst performances of her career. Like almost everyone else in the movie (except for David Morse and sometimes Radcliffe), she doesn't act like a person. Aja doesn't know how to reign her in. He doesn't know how to reign in anything, but is so busy trying to make the movie feel commercial and important that he can't even let it get properly crazy.

There are individual scenes that work, and the movie looks good courtesy of DP Frederick Elmes, but  it's all hollow. Aja flashes back to childhood sequences and drowns the soundtrack in nostalgic hits like "Where is My Mind?" and "Heroes," but none of it means anything. Does establishing that these characters have known each other since childhood inform the events in any way? No. Does it have any impact on the central metaphor? Not at all. Same goes for the religious imagery he piles on presumably because he knows his movie is supposed to be about the devil and therefore there should be some crosses and shit. Horns looks and sounds like a movie, but there's nothing going on underneath.

I'm actually more curious to read Joe Hill's book now than before I saw Horns, if only to find out if its a faithful translation of a mediocre text or if the filmmakers blew it. Either way, it doesn't matter. Their job was to make a good movie. In that, they failed. This thing is a mess.