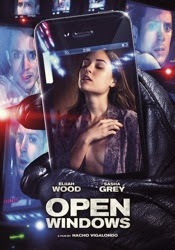 This one would make Hitchcock proud.

Open Windows, the English-language debut of Timecrimes director Nacho Vigalondo, is Rear Window for 2014 -- only instead of one neighbor spying on another apartment building, everyone is spying on everyone everywhere every second. As a thriller, it doesn't always work. As a technical exercise, it's impressive. As a statement about celebrity and privacy in an era (era) in which we're all on camera all the time, it's fascinating.

Elijah Wood plays Nick Chambers, a celebrity blogger obsessed with actress Jill Goddard (Sasha Grey). Nick wins a contest to have dinner with Jill while she's in Austin promoting her latest movie (at a festival not unlike the recently-held Fantastic Fest; Scott Weinberg even has a cameo in the film), but Jill backs out much to Nick's disappointment. It's then that he's contacted by Jill's "manager" Chord (Neil Maskell), who hooks Nick up with access into all of Jill's devices -- cell phone, laptop, you name it -- so he can spy on her via webcam. Before long, though, Nick begins to realize that things aren't quite what they seem. Unfortunately for both him and Jill Goddard, it may be too late. 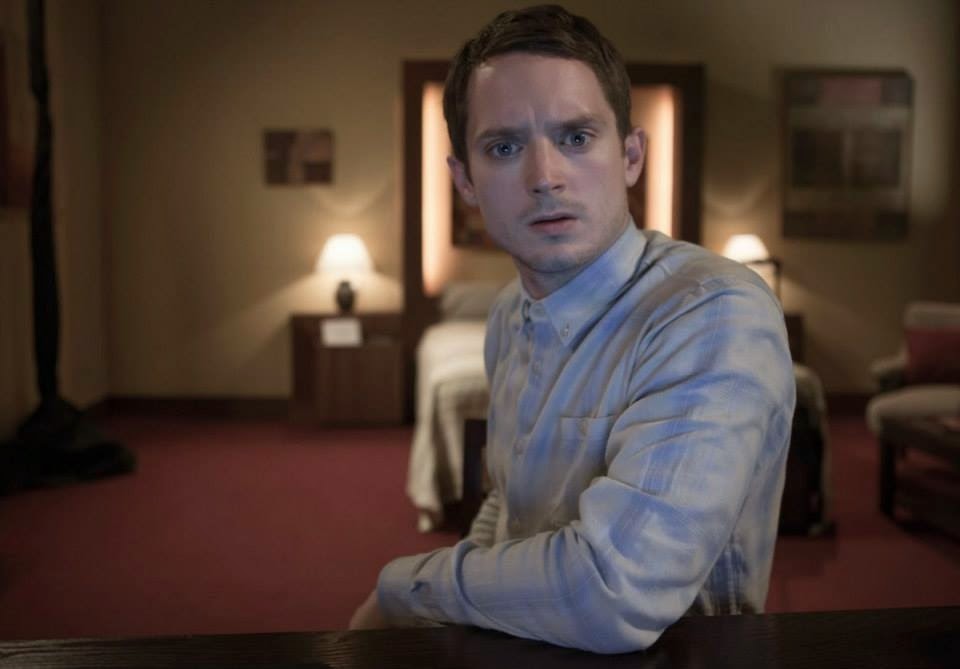 Because it's pieced together via different web and surveillance camera footage, the entirety of Open Windows plays out over a computer screen without one obvious cut -- the camera just shifts from browser window to browser window (it's easy to see where the cuts are hidden, but they don't call attention to themselves as such). It's a gimmick for sure and it can sometimes take the viewer out of the story; we wonder which angle we are watching or why there's a camera filming what we're seeing instead of following the story (which is a challenge in and of itself; more on that in a second). But Vigalondo is also commenting on the way we process visual information now -- why have only one screen when you can have five or six? Isn't that how we approach everything now, from cable news to the checkout line at the grocery store? Hell, I've got four windows open as I type this review. And I'm only spying on Sasha Grey in one of them.

What Vigalondo is really talking about is our total disregard for privacy nowadays, and the way we've surrendered what little bit we might have had by surrounding ourselves with technology and cameras -- literal windows into our lives that can be accessed by anyone at anytime. Nick knows that what he's doing is wrong but he goes along with it anyway. Why? Because he feels he's owed it. Because Jill Goddard isn't a person to him, just an image to be fetishized. Because he knows that he can't be caught looking. Because it's easy. Because he can. It's all the same kind of thinking that led to the recent celebrity nude photo theft, in which famous women had their lives and bodies splashed all across the internet by assholes who stopped thinking of them as people with feelings and privacy that should be respected. The movie was made well before the massive celeb hacking took place (it premiered at SXSW last March), but Vigalondo predicted all of it.

And then there is the casting of the two leads, which might be the best thing about the movie. Elijah Wood is good, doing the same kind of cornered everyman he played in Grand Piano last year. I'm more excited that he's in the movie at all, because it's yet another chapter in his evolution as the unsung hero of the independent genre movie. His participation helps movies like this get made, while his production company SpectreVision literally makes movies like this. I love this phase of his career. 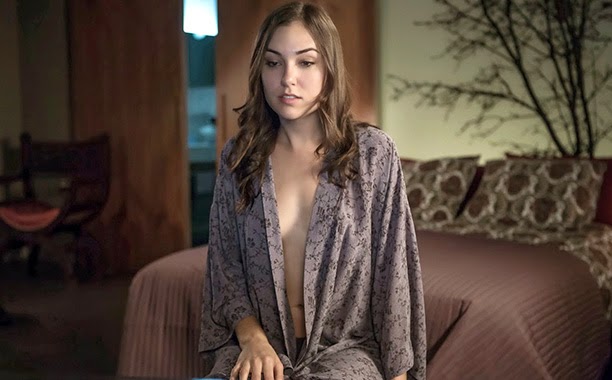 The casting of Sasha Grey lets us know that Vigalondo is really up to something. As a former star of adult films, Grey is no stranger to being watched on the internet, or to having men obsess over her and view her not as a human but as something they can jerk off to. In Open Windows, she's a famous genre actress who may or may not have a sex tape about to leak; either way, it's being used to promote a movie. A scene in which she's told to strip over a webcam and the way the moment interacts with Grey's own career "baggage" is fascinating; hers is stunt casting in a way, but in the best way because a) the casting informs the role and b) Grey is good in the part). I've been rooting for Sasha Grey to break into the mainstream since her role in Steven Soderbergh's The Girlfriend Experience, because she's someone who has always taken full control of her career and made no apologies for it and because I'd like to think that a country that spends as much money on porn as we do isn't so hypocritical as to act like a former adult film star isn't good enough to star in other movies. The lines are all blurred now anyway, so I'd hate to see Grey punished for doing a different kind of acting before this. I like that she's choosing genre projects, too; between this and Would You Rather, she's showing good, interesting taste.

I'm not sure how well Open Windows will age. It's a film that's so of the moment that it might look like The Net in five years. At worst, it will be a problematic thriller that captures a specific time in our cultural conversation about privacy and celebrity. At best, it's a movie that's going to inspire new approaches to storytelling -- some kid is going to see it and realize he or she can build upon Vigalondo's visual style. I'd be all for it as long as that person recognizes that what the director pulls off in Open Windows isn't a low-budget, low-fi cheat. It's really sophisticated, and it's really hard. 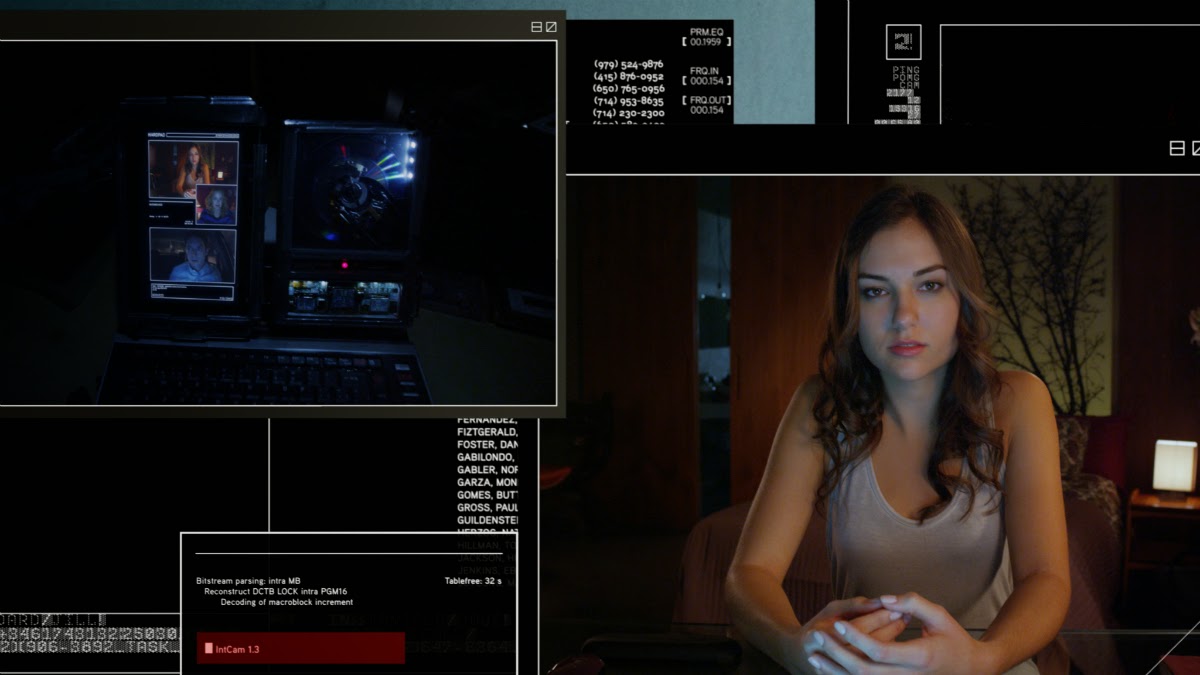 Ultimately, Open Windows is a better movie to analyze and interpret than it is one to enjoy, which is a problem because it's essentially structured as a thriller that's meant to be suspenseful and exciting. Vigalondo's script starts to fall apart as it strains for shocking twists and life-or-death stakes because the technical demands and the crosses/double-crosses get in the way of the thriller elements. It's a movie that could use a bit more De Palma pulpiness to make the medicine go down. Things go almost totally off the rails in the last third, which offers chase scenes that are hard to follow and reversals that only barely make sense. Thankfully, Vigalondo saves it by the end, taking the story in a direction that's bold in its implications -- I was reminded of Snake Plissken at the end of Escape from L.A. And no, that's not a sentence you read very often.