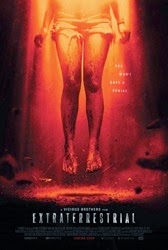 It's a close encounter of the familiar kind.

The new sci-fi horror movie Extraterrestrial is a well-directed movie with nothing to say. Written by Colin Minihan and Stuart Ortiz -- better known to horror fans as The Vicious Brothers -- but directed by Minihan alone, Extraterrestrial offers some impressive visuals in the service of hardly any story. It's a slick movie that looks more expensive than what I'm assuming its modest budget would suggest, but that's the best thing I can say about it. 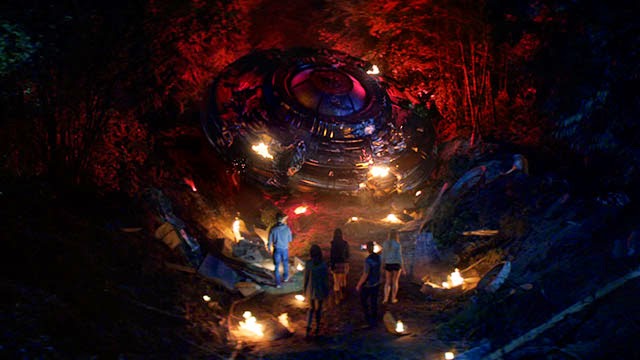 Brittany Allen plays April, whose plans for a weekend away at a remote cabin in the woods with her boyfriend Kyle (Freddie Stroma) are interrupted when he invites their mostly obnoxious friends along. Things get even worse when an alien ship crashes in the woods and the group is forced to try and survive the night against an attack with unknown motives and an unknown outcome. Gil Bellows, Emily Perkins and a welcome Michael Ironside show up to lend the movie a bit of extra genre cred, but none of their characters or their performances add up to much. With the exception of one big moment, their scenes exist almost entirely independently and could be removed without affecting the larger narrative at all.

Everything from the look of the spacecraft to the design of the aliens themselves -- long and slender and green and big-eyed -- feels unoriginal. There's a long section near the beginning (the first appearance and discovery of the ship) that plays out through a character's camera, because found footage is a thing. The technique is never used again, but lingers too long in this instance to be ignored, like the movie can't decide exactly what it wants to be. It just feels like a couple of filmmakers hedging their bets and playing it safe with most of their choices when that's the exact opposite of what they should be doing. Why not use their obvious technical skills and small-scale terror to explode the familiar tropes of the alien invasion genre? Instead, it's a movie that feels like too many others. Jason Eisner covered this exact same territory -- and better -- in about 20 minutes in last year's horror anthology V/H/S/2. At 100 minutes, there's a lot of time for Extraterrestrial to spin its wheels. 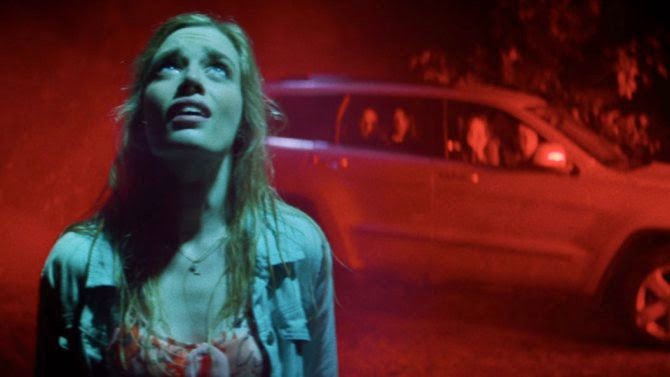 And spin its wheels it does. This is what I like to call a Run Around movie, in which characters just run from place to place with little sense of purpose or momentum: they run from the house outside, from outside back to the house, to the car, away from the car, back to the house and on and on. Maybe it's supposed to create a sense of chaos and panic, but it also disrupts any sense of dramatic structure. A never leads to B never leads to C, and the result feels like a story without any kind of a plan.

There aren't any established rules, either. Sometimes the aliens abduct people. Sometimes they let them go. Sometimes they physically attack people. Sometimes they use mind control and make people hurt themselves. Usually they don't. Everyone acts according to what serves a scene in a given moment whether or not it fits into the larger narrative. Much of the movie is meant to be scary, but then the Vicious Brothers will toss in a gag that's totally juvenile and clichéd and undermines any tension they managed to establish. There's never a consistent tone. 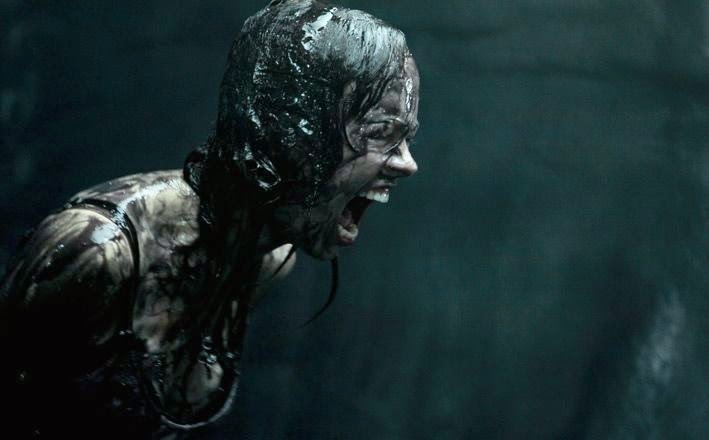 Extraterrestrial finally comes up with some surprises in its third act, though even some of that stuff feels informed by other movies. The filmmakers stretch -- really stretch -- to force an emotional connection between the audience and the characters, then punch us in the stomach for buying into it because...I don't know...they've seen Night of the Living Dead? There's having a bleak ending and then there is giving the audience the finger because you're not sure how else to end your movie. It's yet another problem of tone, and further proof that the Vicious Brothers either couldn't decide or couldn't get a handle on what movie they wanted to make.

The disappointment is particularly frustrating because Minihan proves he can set up some good-looking shots and stage a few effective sequences -- the elements for a better movie are here, mixed up by confused writing and too heavy a reliance on the familiar. There is so much good indie horror available right now that I can't recommend spending 100 minutes on Extraterrestrial. It's a bummer.