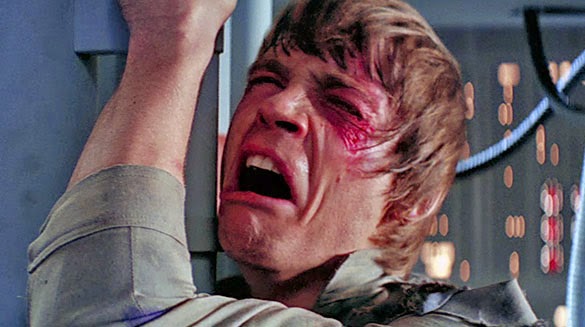 Spoiler: several of them are from Star Wars.

"But I was going into Tosche Station to pick up some power converters!" That's it, folks! The whiniest piece of dialogue in FILM HISTORY. But I posit that this series is filled with whiny bon mots. For example, "Look, I can't get involved. I've got work to do. It's not that I like the Empire. I hate it. But there's nothing I can do about it right now ... It's all such a long way from here." There's also, "But with the blast-shield down, I can't even see!" My point? Luke Skywalker is a whiny bitch. But the original movies still rule, so it's all good. Bonus video: original deleted scenes from A New Hope, including a lot more of Luke on Tatooine.

"I don't like sand. It's coarse and rough and irritating and it gets everywhere." Like father, like son, I suppose. And let's not forget, "It's all Obi-Wan's fault. He's jealous. He's holding me back!" Followed closely by, "From my point of view, the Jedi are evil!" from Star Wars: Episode III - Revenge of the Sith (2005). I mean, for real, he says FROM MY POINT OF VIEW. "IMHO, Yoda's kind of an asshole!" Obviously, these quotes are combination of bad acting (sorry Hayden) and AWFUL writing (just the worst). And not even "good" actors can save the dialogue. Case in point, Natalie Portman pleading with Anakin to stay. SUCH UTTER DOGSHIT. Whining spans both trilogies. Will J.J. Abrams break the cycle?

"I want a hamburger. No, cheeseburger. I want a hot dog. I want a milkshake. I want potato chips." An arguably more whiny line from Caddyshack also comes courtesy of Spaulding Smails (John F. Barmon, Jr.) when Judge Smails (Ted Knight) demands he plays golf instead of tennis. Spalding: "What about my asthma?" Judge Smails: "I'll give you asthma." Either way, he got nothing. And liked it.

"I'm not even supposed to be here today!" Kevin Smith originally wrote the role of Randal Graves for himself, hence one of the reason he gets all the funniest lines (although let's not take anything away from Jeff Anderson's awesome interpretation of the character). Randal's reaction to Dante Hicks' (Brian O'Halloran) constant complaining can be interpreted as Smith talking to himself before he got off his ass and actually made a movie. Quit complaining! Stop thinking you're better than you are and prove it! I encourage you to watch the video above -- Randal's response comes at about 58 seconds in. Also, 37 DICKS? In a row?

"She's not my mother, Todd" (sorry for the potato quality of the clip). Young John Connor (Edward Furlong) is super whiny. Everything the kid says is irritating. That's the point, though. He's an adolescent punk living with disinterested foster parents. His best friend is a soul-stealing ginger named Tim (Danny Cooksey, who, sadly, never once says, "Mishter Dee!"). He's being chased by a liquid metal death machine, and his savior is the former Governor of California. You'd be whiny too. The casting of Furlong in this role is just perfect, as he's whiny in everything. Even as the once-promising neo-Nazi Danny Vinyard in American History X (1998), he whines up the place: "So I guess this is where I tell you what I learned -- my conclusion, right? Well, my conclusion is: hate is baggage." DEEP. AND WHINY.

"I want an Oompa Loompa now!" Veruca Salt is not only one of my favorite all-female Chicago-based '90s alt-rock bands, it's also the namesake of one of the most selfish little brats to ever appear onscreen. Throughout this '70s children's classic, Salt (Julie Dawn Cole) is domineering, demanding and dictatorial. With this line delivery, however, she bridges the gap to Whine Town (population: Everlasting Gobstoppers). And don't even bother with Tim Burton's shitty 2005 "reimagining."

"We are not sinking, we're crashing!" It pays to have sex with the director. Just look at Mrs. Spielberg herself, Kate Capshaw. She's super annoying. Everything she says in Temple of Doom is kind of terrible. She's probably the worst thing about a movie that, frankly, isn't very good. Sure, we all have fond memories of the Indiana Jones series, but c'mon ... have you seen this lately? "Oh ... my ... God! Oh my God! Oh my God!"

"Iss not fair!" Nihilists, amIright? Comic relief by way of over-the-top Eurotrash accents, featuring Peter Stormare and Flea. Walter Sobchak's (John Goodman) next line sums up what were all thinking: "Fair?! Who's the fucking nihilist around here?! You bunch of fucking crybabies!" After verbally cutting them down, a fistfight erupts, and Sobchack promptly Tyson's off the tip of one of the nihilist's ears. So now the anarchists are down two appendages -- an ear and Aimee Mann's toe.

"Rhett! If you go, where shall I go? What shall I do?" This penultimate line spoken by Scarlett O'Hara (Vivien Leigh) to one of the most famous quotes in film history is DRIPPING with whine. But I think its desperate tone makes Clark Gable's curt response all the more kick ass.

"They're eating her! And then they're going to eat me! OH MY GOD!" I think we're done here.
Posted by Patrick Bromley at 12:00 PM