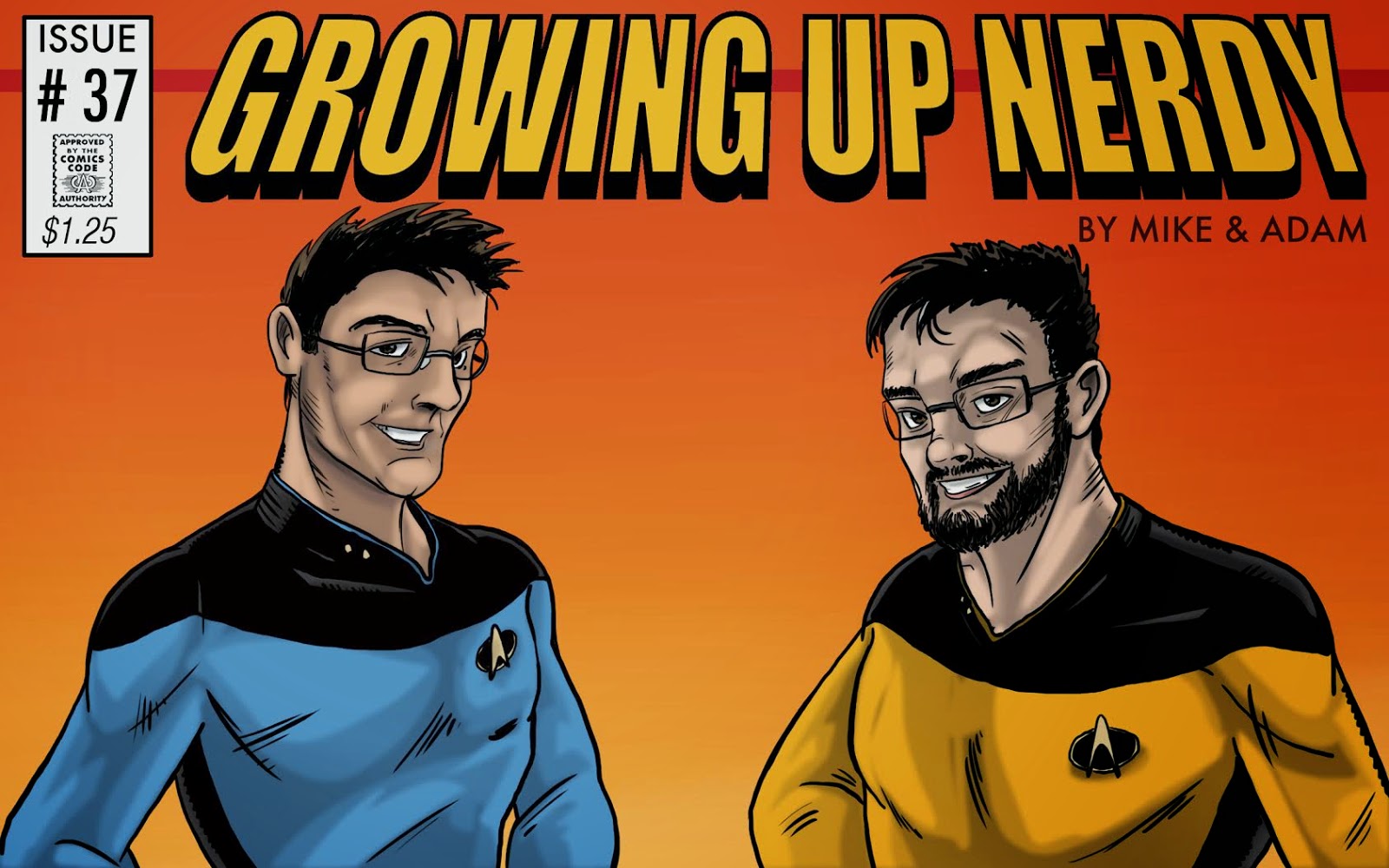 The Nerdy Boys are boarding a ship for outer space this week. Care to join them?

Mike: There is no question which starship I would want to serve on: The USS Enterprise. The only question is, would I want to serve with The Original Series (TOS) crew or the Next Generation (TNG) crew?

Let’s break this down: For those of you unfamiliar with The Howard Stern Show, there’s a guy that works on the show named JD Harmeyer. One of JD’s jobs -- his only job, really -- is to watch and record stuff on TV, then pull any clips that may be funny or interesting for Stern to play on the air. It’s kind of like a radio version of The Soup. My hope would be that in time, JD’s job would become a real job, and for some reason the Enterprise would have need of someone watching shit all day and recording it. That’s where I come in.

Now that we’ve established my job, I have other things to consider if I’m going to choose with whom I want to serve alongside. Like…

Medical Care
Sitting around recording TV all day means I won’t be getting much exercise, which translates into poor health. A good doctor is essential. TOS has Dr. McCoy, aka Bones, a no-nonsense, tell-it-like-it-is kind of guy. Bones is a great doctor and someone I would trust with my life. The problem is, I get the impression that Bones yells at his patients a lot and who the hell wants that? TNG may be the way to go here, assuming I get Dr. Beverly Crusher. Dr. Crusher is also a very good doctor and has better bedside manner than Bones. My only concern is that I’d get sick around season 2 of TNG and I’d be forced to have to see Dr. Pulaski, a one-season-and-done Doctor. My problem with Dr. Pulaski is that she always seems annoyed whenever she has to do her job. “Doctor, I’m not feeling well. Can you see me?” “Ugh. Fiiiiiine.” That wouldn’t be much fun, but I’ll take my chances that I can stay healthy for one year and would hopefully only have to deal with Dr. Crusher. 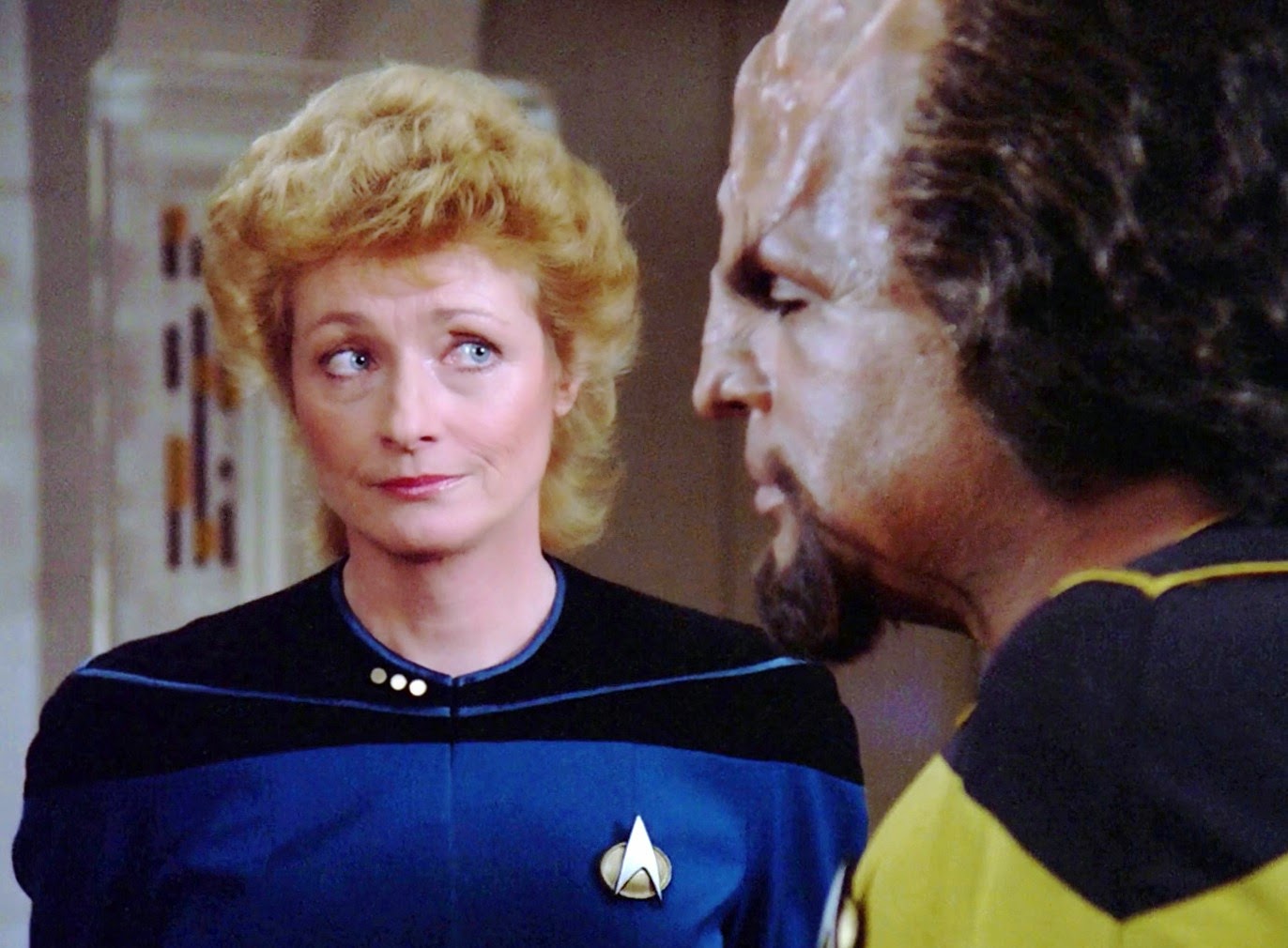 Food
This one is easy. If I served with the TOS crew, I’d eat multi-colored cubes for breakfast, lunch and dinner. TNG crew can eat whatever the hell they want. Doritos in space? Yes, please!

Dating
Watching and recording TV all day can be a pretty lonely job, so I’m going to need some human interaction at some point, preferably with the opposite sex. While TNG has no shortage of attractive women throughout the ship, TOS is crawling with babes. Between the women that bring Captain Kirk the papers to sign every episode to the sexy aliens encountered on every other planet, TOS is the crew to serve with. I will be forced to compete with Captain Kirk, however, so that may mean I’ll remain single for some time. Either way… 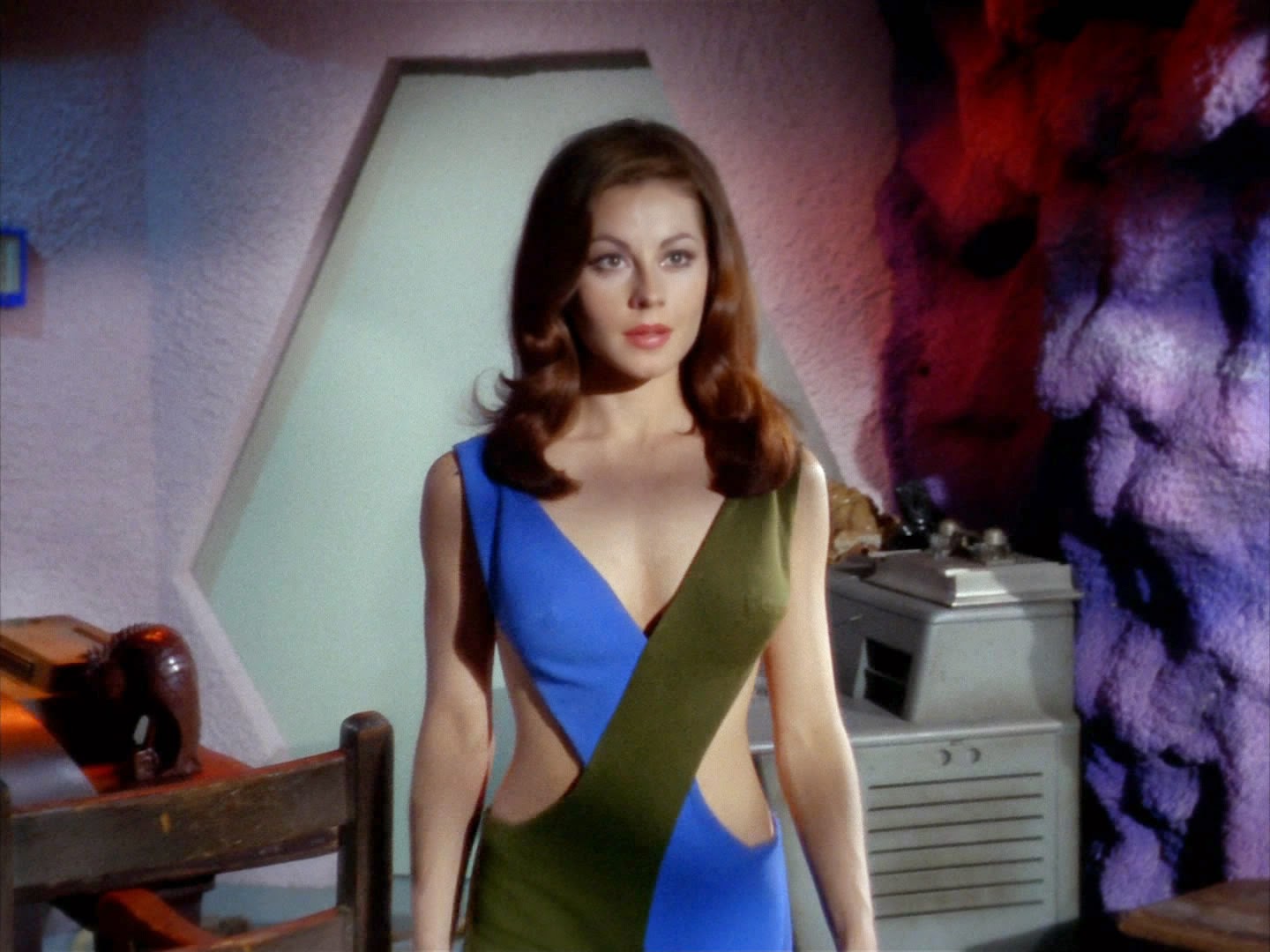 Recreation
TNG has a holodeck, TOS has three-dimensional chess.

Friends
Again, my job can be a lonely one, so good friends to share a drink with in my off hours are important. There are no shortage of fun people serving on both Enterprises and I’d be a lucky motherfucker to call any of them my friend. The threesome of Kirk, Bones and Spock would be a blast to hang out with. While Spock is less than fun, he’s proven that he’d be a loyal friend while Kirk and Bones are your buddies that you want to have a drink with after your girlfriend breaks up with you. The problem is, the TOS crew seem close. Like, real close. Like, you-can-hang-out-with-us-but-you’ll-never-be-one-of-us close. The TNG crew seems to be a little more inviting and eclectic. Problem is I’d be freaked out by having a betazoid (Deanna Troi) knowing the things running through my mind, so that may be the deal breaker. This is a tough one, but…

Captains
This one is tricky because I love both Captain Kirk (TOS) and Captain Picard (TNG). Picard is a diplomat, a steady hand, and a careful captain. He thinks things through and relies on the advice of his crew before making a decision. Kirk is also a great captain, smart and fierce. You want to follow him into battle. Kirk enjoys being in the middle of a fracas and has no trouble throwing a punch or two. I…can’t…decide…

It was close, but in the end The USS Enterprise NCC-1707-D (TNG) is a little more comfortable and technologically advanced, therefore I’ll be attempting to pick women with Riker at Ten Forward if you need me. Adam: First off, in response to my counterpart here, if you’re looking for the best of all the Star Trek doctors, my vote would go to Voyager. I start to think that I may want to serve on Voyager out of all the Star Trek ships and then I would realize how long and boring it would be and it makes me sad.

This is a big choice here folks; there are a lot of really great starships to serve on. I mean technically speaking Stargate: Atlantis takes place on a “Starship.” You’ve of course got the Battlestar Galactica, Serenity from Firefly, the SDF-1 Macross from Robotech (LAYOFF! The name of this column is “Growing up Nerdy), The Nostromo or Sulaco from the Aliens movies, The Jupiter 2 from Lost in Space, and, of course, who could forget a Star Destroyer or Millennium Falcon from Star Wars?

Let’s back off for a minute. Yes I know there are a lot more, and yes Deep Space 9 and The Death Star can technically move, but we’re considering those Space Stations. So if I’m considering those two Space Stations, I should probably take Atlantis out of the running as well. There a lot to choose from, so let’s break this down.

As much as it pains me, the Battlestar Galactica is OUT. I mean if we are talking about the new version of Battlestar Galactica, which is a pretty depressing and dreary place. Sure you’ve got some bangin’ hot female robots running around, but they’re all trying to kill you. Starbuck is a hottie as well, but she’s a certifiable crazy-person-robot-angel- whateverthefuck. Speaking of the robots, you’re not even sure who is a robot and who isn’t, so things would get too confusing and I’d be too angry and depressed. 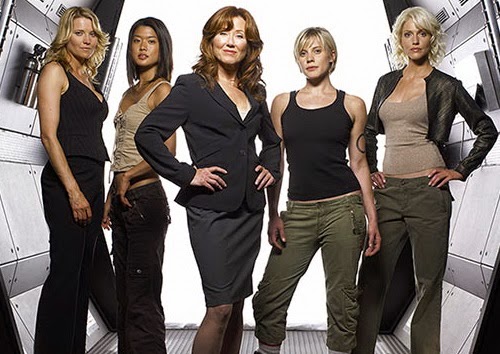 Speaking of depressing, I love my family but the idea of being lost in the middle of the universe with them for an unspecified amount of time sounds like a little much. While I love the idea of a crazy uncle and his robot that warns me of danger, the Jupiter 2 is OUT as well.

I have to take a good hard look at the entire Star Trek universe and all the various ships. While the idea of serving on a Romulan Bird of Prey sounds good in theory, I have a sinking suspicion I’d find myself dead very quickly. That means I’d have to be on one of the Federation starships and I’d have to give that a resounding “NO!” I’ll tell you why; in all the Federation Starships, no one is overweight. Next Generation, Voyager, Deep Space 9, Enterprise, even the entire cast of The Original Series is super skinny except for Scottie because I’m convinced he’s the last motherfucker in the galaxy who still knows how to party. My theory is that every single person on these starships is so damned skinny because they either started counting carbs or are really into liposuction, and I just can’t deal with that. So sorry Trek, but you’re gone… now eat something.

The Millennium Falcon and Serenity are OUT as well because they’re too damned small and are constantly running away from shit. What kind of existence is that always running away? Star Destroyer -- Run Away. Reavers -- Run Away. Giant Worm -- Run Away. That’s no fun. I like my ships like I like my Star Trek extras -- a little meat on them. That leaves only a few that I’d really consider and we need to start splitting hairs here. 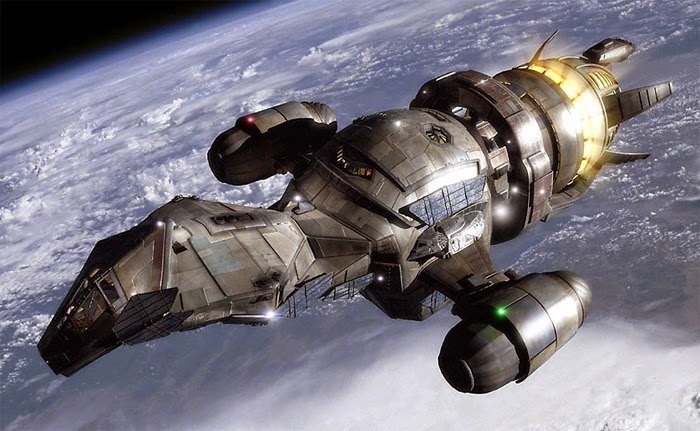 Star Destroyers are awesome. They’re big, they’re clean, they pack a serious punch, and people are scared shitless of them. Problem is that no one seems to ever have any fun. Everything is very regimented and we all know that your boss is kind of a Jedi-hunting dick. So as much as I like the idea of a Star Destroyer, I’m going to have to say it is OUT.

This is getting really tough because I think it would be AWESOME to serve on the SDF-1 Macross. The smaller ships you fly kick ass, and the Macross itself is a giant transformer! It would be so cool! I could have myself a grand old time as a fighter pilot, but I think the biggest problem I would have would be when it transforms. I’m sure I’d have sleeping quarters and then the ship transforms I realize I’m sleeping in the ass. Then the next time I’m out and about trying to pick up some girl and she asks “Where do you live?” and I have to respond with “Over in the ass section.” I’m sorry but between the risk of that and an attack by the Zentraedi, I just can’t risk it.

So we are left with either the Nostromo or the Sulaco. When looking at the type of ship the Nostromo and Sulaco are classified as, the Nostromo is technically a “Tug.” On, great, I get to serve on a “Tug.” Bullshit.

That leaves the one and only true answer to “What starship would you serve on?” being the Sulaco. Any other answer is wrong. Yes, I would serve on the Sulaco, I's big, it’s bad-ass, and it’s filled with marines, weapons, robots, and some sweet pods where you can take really long naps. Not to mention that while it technically is operated under the United States Colonial Marines, it really is sent to LV-426 by “The Corporation,” making it a giant phallic shaped weapon of Capitalism bitches! So while my pal Mike is rubbing elbows with the Space Communists aboard the Enterprise with their vegan meals and calorie counting, I’ll be enjoying a steak with my pal Bishop nuking shit from space because it’s “the only way to be sure.” 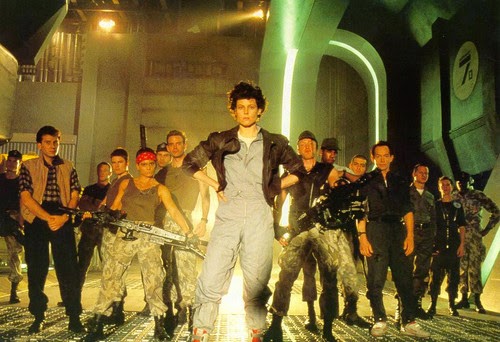