Nobody Cares But Me: Playing God 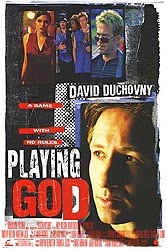 Who wants to talk about a David Duchovny movie they don't really remember seeing?

Before you get your hopes up (your hopes are not up), this isn't necessarily going to be a recurring feature at F This Movie!, mostly because I write enough recurring features already. I'll bring it back from time to time when I feel like talking about The Rainmaker or Payback or Birthday Girl or some other movie no one cares about. These movies that I'll be writing about (again, from time to time) are not movies that I love; those have their own recurring column. These are movies I really like, but they're the kinds of movies you might only leave on if you stumble across them on TBS or TNT at 2 a.m. on a Sunday, where they live on in rotation. These are not necessarily movies you would make it a point to seek out -- at least, not until I've had my say.

First up is Playing God, a quickly-forgotten crime drama from 1997 that was supposed to turn David Duchovny into a movie star but wound up disappearing from theaters in just a couple of weeks, recouping only a third of its already-low $12 million budget. I remember seeing it the night it opened and liking it, which makes me the only one. It was among the first movies I ever bought on DVD, which might say more about the timing of its release than my own burning need to own it; still, it's a movie I've seen a handful of times and liked it every time, wondering why it isn't thought of more fondly before having to remind myself every time that it isn't thought of at all. This is a movie with a 14% Rotten Tomatoes score.

Playing God was David Duchovny's first big starring role after hitting it big on The X-Files (a show I still have every intention of working through the whole way but have only seen the first and last seasons). It feels like it. The mid-'90s were full of movies designed to turn TV stars into movie stars, many starring cast members from Friends. Apparently it was shot in 1995 but shelved until 1997 because of bad responses from test audiences, who may have been more interested in watching Duchovny chase aliens and bust up paranormal conspiracies than carry a shotgun down the L.A. freeway. 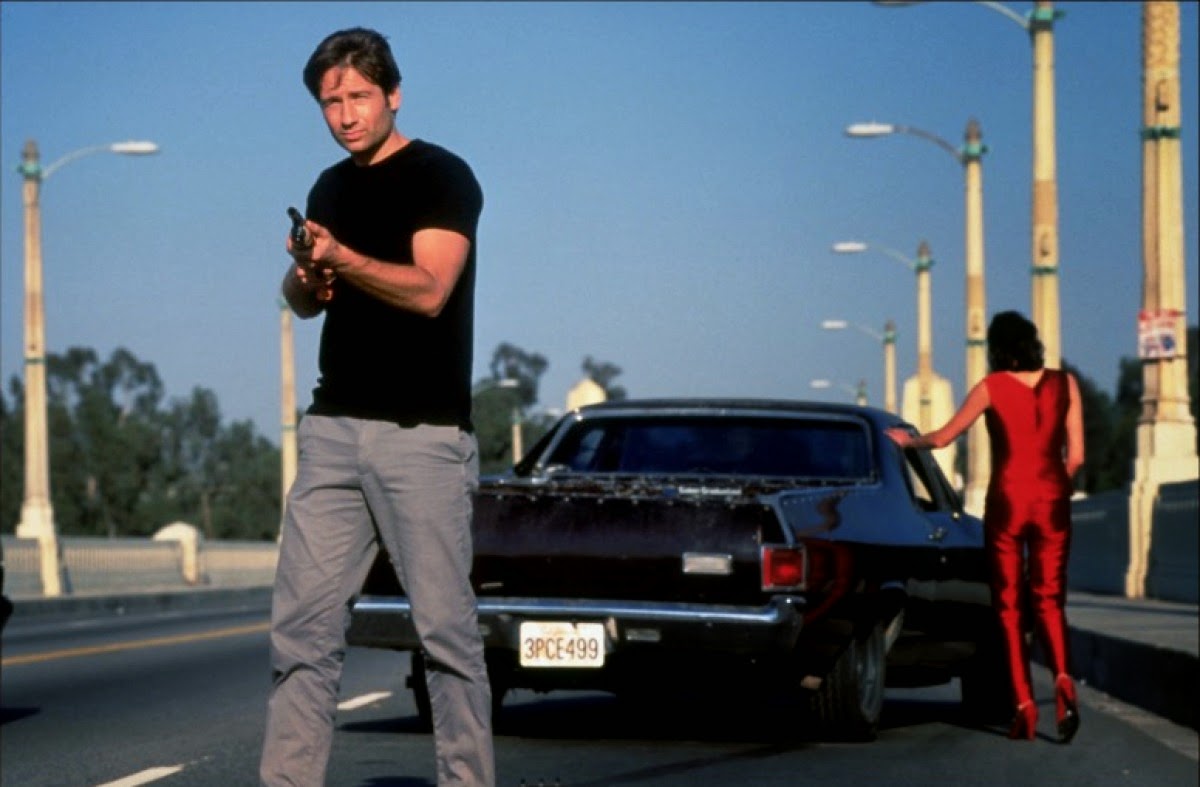 He plays Eugene Sands, a former L.A. doctor and current drug addict who has been banned from practicing medicine after losing a patient on the operating table while experiencing a bad high. After saving the life of a gunshot victim in a nightclub, Eugene is summoned to see Raymond Blossom (Timothy Hutton), a criminal and psychopath who repays Eugene for saving one of his guys by offering him cash and a steady supply of drugs. Before he knows it, Eugene is working for Raymond as his doctor-on-call, tending to every triggerman and gangster that needs stitching up. He's also getting guns pointed in his face and FBI agents knocking on his door.

Besides being the first of several movies that failed to make David Duchovny a movie star (others include Return to Me, which is delightful, and Evolution, which is not), Playing God also features one of the first starring roles for a young Angelina Jolie, who plays Raymond's girlfriend and was a few years off from winning an Oscar and becoming a household name. She looks totally different here; her lips are still swollen, but her face is fuller, her nose broader. She's not given much to do but still makes a big impression; you walk away from the movie wanting to know her name. Perhaps the filmmakers didn't do their box office chances any favors by cutting out her two sex scenes (shots of which can be seen in the trailer), but it's right for the movie. 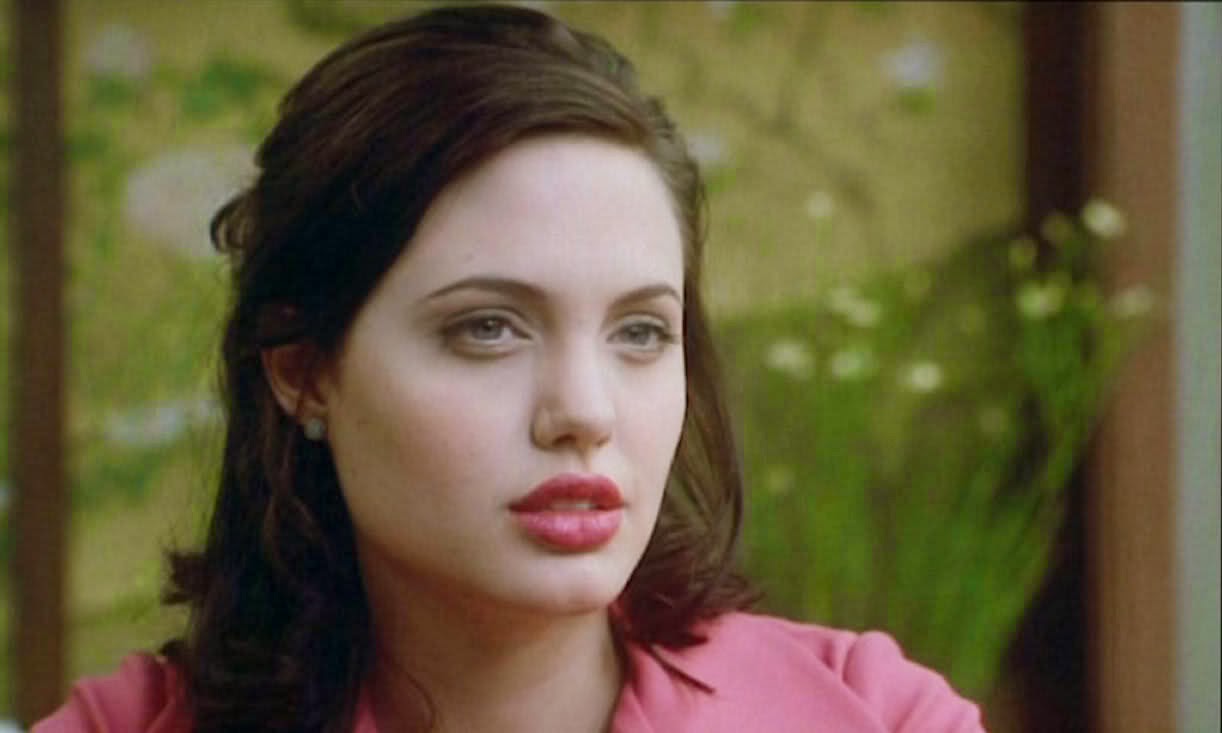 Listen, Playing God is not a great movie. I'm not sure any of the titles that will be written about in this column will be -- otherwise, they would end up in the "Movies I Love" category. But Playing God is an underrated neo-noir with all the elements in place: flawed hero damning himself on the way to redemption, two-bit gangster looking to make it big, sultry femme fatale, deadpan narration. Hell, it's even set in Los Angeles, and while it's set mostly during the sun-soaked day instead of the rain-drenched night, it captures a certain hazy, sleepy feel that's both right for the city and for the main character's drugged-up state. Besides, how can you resist a movie that features lines like "Sometimes in life, we are given a choice between being a slave in Heaven or a star in Hell. And Hell does not always look like Hell. On a good day, it can look a lot like L.A." or "Tonight, I said to myself, 'I will not get high.' I might just as well have said to myself, 'Tonight, I will not breathe.'"
or "Life is all a matter of perspective...if your life was going along well and you found yourself walking with two guys who look like Metallica rejects, you might think it was a bad day. On the other hand, if your life is in the toilet and you had a nasty Fenatyl Citrate hangover, you could say 'What the hell? I am at the beach.'"

Is this great dialogue? Maybe not. No one is going to confuse it for Billy Wilder. But there's a wit and a deadpan sarcasm (because David Duchovny) that makes the movie pop more than one would expect. There are colorful supporting performances from Michael Massee playing the world's most eccentric FBI agent and John Hawkes as half of a pair of stupid surfer stick-up men. Then there's Timothy Hutton, clearly having a blast playing a bad guy and going predictably over the top. I'd be annoyed if it wasn't so goddamn entertaining. I love the way he throws a tantrum after someone he cares about has been shot and screams out "I fucking hate people!" It's a funny line, but more than that it's an honest moment. Most famously perhaps (he said, knowing that there's technically nothing "famous" about Playing God) is the moment in which Raymond is outrunning the police and yells out "THIS IS A CAR CHASE!" His gleeful self-awareness is infectious. It didn't lead to any more bad guy roles for Hutton, an underrated actor who I suspect is a victim of success that came too soon (he won an Oscar for his first movie), but his work here is a lot of fun. Just overlook his oversized shiny shirts and bleached tips. It was the mid '90s. 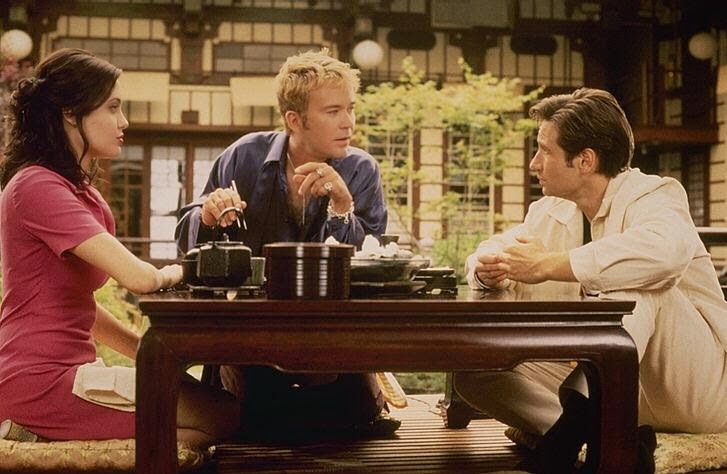 There's another great moment late in the movie that has always stuck with me; it's the one I often think of when I'm trying to rationalize the fact that I think Playing God is much better than its reputation. One of Timothy Hutton's security guys (a badass Brit played with maximum badass Britishness by Andrew Tiernan) has just singlehandedly saved the day by taking out a bunch of armed and pissed off Russians. He is tasked by Ray to kill Eugene on the way to dispose of a body; instead, he is taken by surprise and stabbed in the neck. As he bleeds out and dies, he briefly flashes back to when he was the gun toting rock star just hours earlier. It's the only time the movie really does anything like that (in terms of playing with chronology in the editing), so it's weird that it does so for what is barely a supporting character. But I also love the moment, as it humanizes a thug in just a few seconds and speaks directly to the theme of the movie: we all want to remember what it was like when we were at our best. 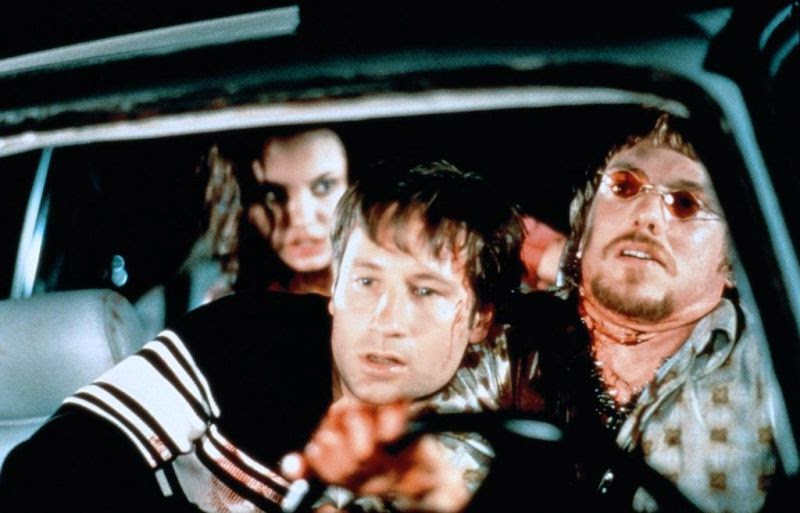 This is the sole theatrical feature from director Andy Wilson, an English television director who dipped his toe into the waters of Hollywood just once and decided he had had enough, retreating to the sanctuary of the BBC. Unfortunately, most of Playing God feels like a made-for-TV movie; Wilson tries to assert himself with some dramatic lighting in a handful of scenes, but mostly it's all wipes and dissolves. There's very little that's really cinematic about the film. It doesn't bother me. It's stylish enough to work as a contemporary noir without having to spell it out in all caps, but I fully understand why someone would see it as a pretty pedestrian piece of work.

Have I sold you on Playing God? Probably not. But I'm not sure that's my goal. I mean, if everyone started loving it I don't think the "nobody cares" angle would work anymore. It's just one of those movies that I've always liked but never get to talk about with anyone because they've a) never bothered to see it or b) saw it but can't remember five minutes of it. If either is the case, consider checking it out. It's a cool movie.

Playing God is available on Blu-ray as a double feature with Color of Night for less than five bucks, so even if you don't like it you can always switch over and watch Bruce Willis fuck an elf in the shower.