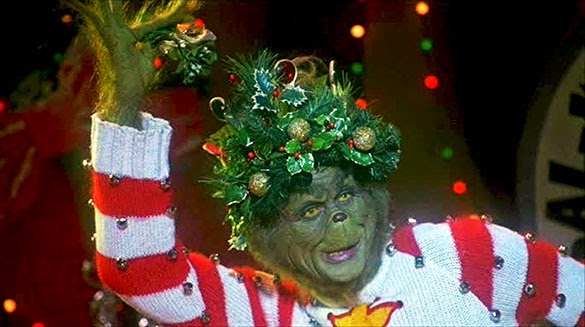 Some boy wizards have all the luck. Harry Potter (Daniel Radcliffe) has the hots -- understandably so -- for his classmate Cho Chang (Katie Leung). His VERY FIRST KISS (before he ever planted one on Ginny [Bonnie Wright]) is under the mistletoe with Chang. Even though she was into it, she was still grieving over the death of her ex, Cedric Diggory (Robert Pattinson). Which makes the whole scene very confusing for two reasons: 1.) is it OK to French "The Chosen One" while still pining for Edward Cullen? And 2.) magician or muggle, teachers should not mack on their students. 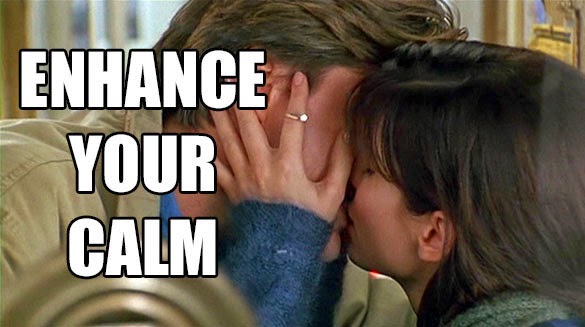 Lucy (Sandra Bullock) and Jack (Bill Pullman) kiss under the mistletoe. I wish my brother was in a coma (sorry Rich!).

Yeah, yeah, yeah -- mistletoe can be deadly if you eat it. But a kiss can be even deadlier ... IF YOU MEAN IT. Probably the most famous line (repeated twice) from this movie. The second iteration features a FACE LICK. Also, why the F is there mistletoe hung from a TV antenna on top of a roof?

At the end of the original movie (that is 19 YEARS OLD!), Bo "Sexual Predator" Peep (Annie Potts) pulls Woody (Tom Hanks) over and attacks our unwitting (and asexual?) cowboy with a kiss. I'm all for Tom Hanks getting some sugar, but this is borderline assault. But they're just toys, so I'm probably overthinking it. Kudos to the unsung heroes of this scene, the sheep! If they hadn't held the mistletoe above Bo Peep for God knows how long, this crime would never have happened! 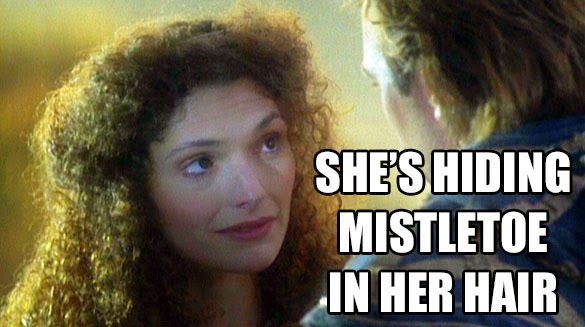 Noticing some mistletoe upon returning home from the Crusades, Robin of Locksley (Kevin Costner) brags to Azeem (Morgan Freeman), "Many maids lost their resolve to me thanks to this little plant." Azeem responds: "In my country, we talk to our women. We do not drug them with plants." You can see why this is Heath Holland's favorite movie.

What an ugly movie. This film is so filled with hate, that it turned innocent, bright-eyed Cindy Lou Who into trampy, smut-peddling Taylor Momsen (NSFW?). Despite spitting on the grave of a beloved childhood cartoon, this live action remake was a HUGE financial success at the box office, opening at number one, and staying at number one for four straight weeks. Its total worldwide theatrical release gross was $345,141,403. THAT'S DISGUSTING (and gross). Anyway, the Grinch (Jim Carrey at his hammiest) pulls out some mistletoe, dangles it near his b-hole, and Whoville collectively loses their shit. Comedy!

The only reason Scott Calvin/Santa Claus (Tim Allen) kisses Carol (Elizabeth Mitchell)? The mistletoe is made of cocaine.

Don't just stare at it. Kiss under it. The expression "Mistletoe Alert" is used twice -- once by girlfriend Evelyn Williams (Reese Witherspoon), and once by Patrick Bateman (Christian Bale), both at the same holiday party. It's a memorable line in a movie full of killer dialogue (seewhatIdidthere?). Listen to our podcast on the film (link above), why don't you? 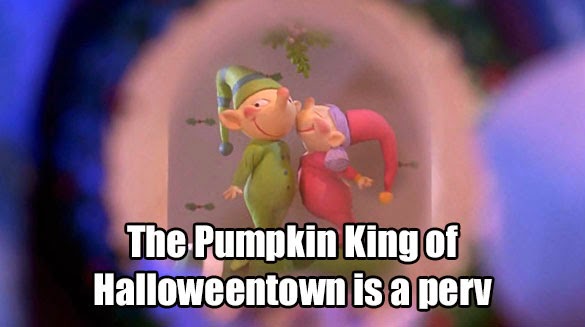 Jack Skellington (Chris Sarandon/Danny Elfman) is all "WHAT'S THIS?"
Posted by Patrick Bromley at 5:00 AM