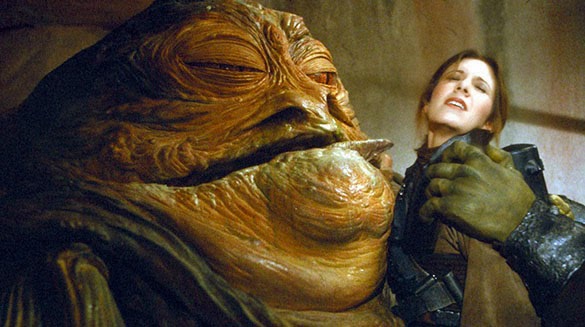 I haven't met a face I didn't want to lick.

Creepy male orderly DOUGLAS! (Ken Gibbel) licks Sarah Connor's (Linda Hamilton) face while she's strapped to a bed inside a mental hospital (classic Doug). Don't worry -- she gets her revenge later in the film by breaking Dougie's neck with a broom handle, severing his spine. Too bad his vertebrae isn't made of LIQUID METAL (this Doug's got that covered). 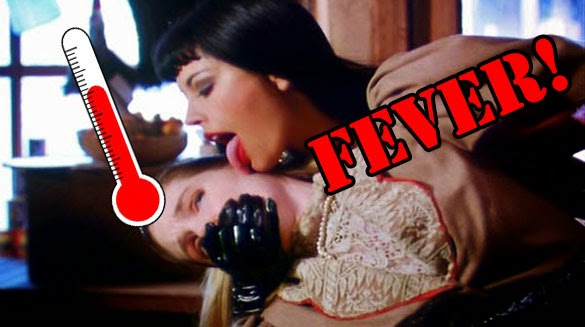 If you've got Full Moon Fever, there's only one known cure: FACE LICKS! Patrick reviewed this movie ("Boy did I have a good time with Oblivion" -Patrick Bromley, F This Movie!) back in February (link above), so please read his in-depth take on the film if you'd like to know more. For the purposes of this Flick Bait mention, Lash (Musetta Vander) licks the side of Mattie Chase's (Jackie Swanson) cheek, exclaiming, "Delicious!" Salty cheeks caked in makeup = always delicious. 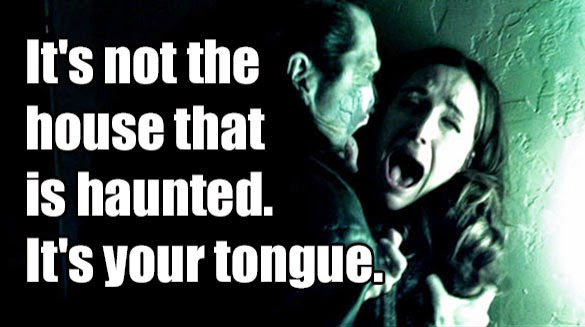 The Lamberts get attacked by a pack of ghosts. One of the apparitions -- a pervy dude with no eyes and a long, grody tongue -- pins Renai Lambert (Rose Byrne) up against a wall, and slowly licks her face. But it's OK, because it's Rose Byrne. I MEAN WOULDN'T YOU?

A scene so nice they shot it twice. Also, kind of a cheat (SORRY!), but the visual is just so disturbing and memorable, I had to include it. The tongue of Freddy Krueger (Robert Englund) protrudes through a disconnected dream phone to lick the mouth of Final Girl Nancy Thompson (Heather Langenkamp). "I'm your boyfriend now," indeed. 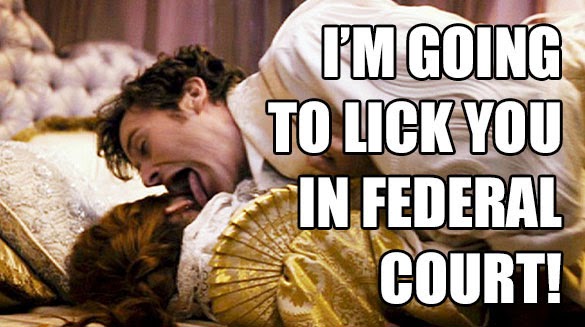 Probably the least creepy example on this list (although, let's be honest, any example of face licking is still a LITTLE creepy, no?), Prince "Charming" Alcott (Armie Hammer), acting like a dog, licks the Queen's (Julia Roberts) face after taking a love potion. Apparently, this was the very first scene that Hammer and Roberts filmed together after meeting for the first time. And I'm sure things GOT A LITTLE AWKWARD! Ugh. That sentence smacks of an Us Weekly tabloid non-story. "You'll never BELIEVE what Armie Hammer had to do to Julia Roberts!" Sorry for writing such lame copy.

Michelle Pfeiffer licking Michael Keaton's face seems about as distant a memory as that sailor kissing a nurse in Times Square on V-J Day. THEY BOTH HAPPENED A LONG TIME AGO, is my point. While Keaton is still kind of relevant (his recent film, Birdman, is quite something), I don't think I've seen a Pfeiffer pfilm in years. And that's a ... shame? ANYWAY, Catwoman licks Batman's face under some mistletoe. Why a lick, cousin? Why not a kiss? BECAUSE, YOU TWIT, SHE'S A CAT. 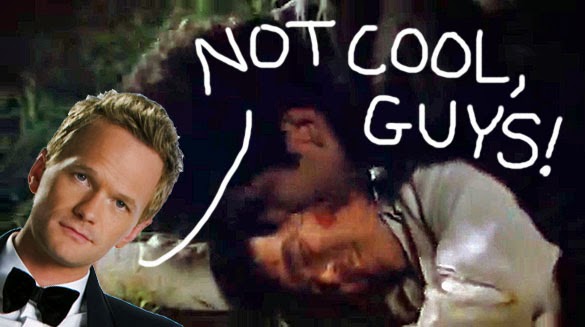 One of the guys is passed out in a corn field (Harold?). He's dreaming that some hot chick is licking his face. It turns out, the other guy (Kumar?) is actually licking his face. In order to wake him up. You know ... with face licks. He exclaims, "I'm sorry! You've been out cold for the past half-hour! I figured that maybe if I did some gay shit you'd wake up." Classic stoner comedy/homophobia. 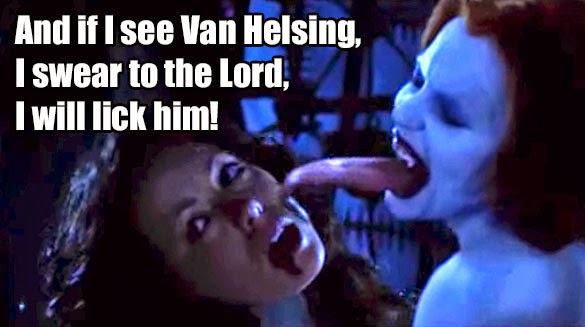 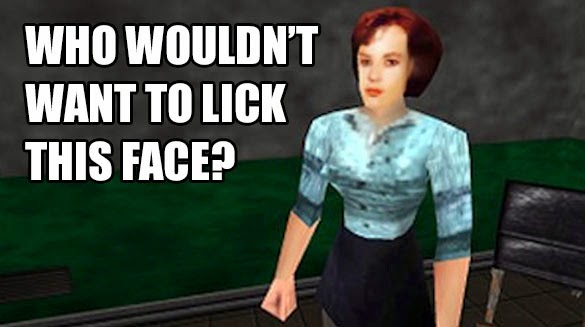 Alec Trevelyan/Janus (Sean Bean) licks the cheek of his hostage Natalya Simonova (Izabella Scorupco) -- like a proper Bond villain -- and quips, "Lovely girl. Tastes like ... like strawberries." To which Pierce Brosnan responds, "I THOUGHT CHRISTMAS ONLY COMES ONCE A YEAR." Or something. It's been a long time since I've seen the movie (or played the N64 video game). 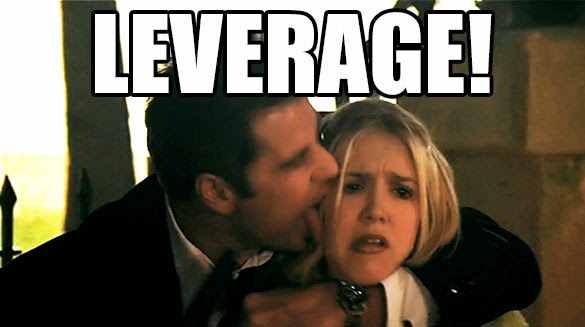 I guess it's a prerequisite that, whenever possible, the aggressor (usually a man) licking the victim's face (usually a woman) has to crassly compare it to a piece of fruit (see "strawberries," above). In this instance, John Travolta plays the bad guy, Castor Troy, and licks the face of Sean Archer's daughter, Jamie (Dominique Swain), during a standoff in a church. HE'S OBSESSED WITH PEACHES, you see? "Y'know, I could eat a peach for hours." Eww. But remember, in the beginning of the movie, Travolta was actually Jamie's father. He switched faces (in a procedure I like to refer to as "FACE/OFF" [trademark mine]) with the REAL villain played by Nic Cage (but only at the start of the film). So her father's face licks her, but it's really the bad guy, and her dad, now wearing a different face, watches all the daughter-licking action in furious anger. It's all very confusing. And sexual. And creepy. 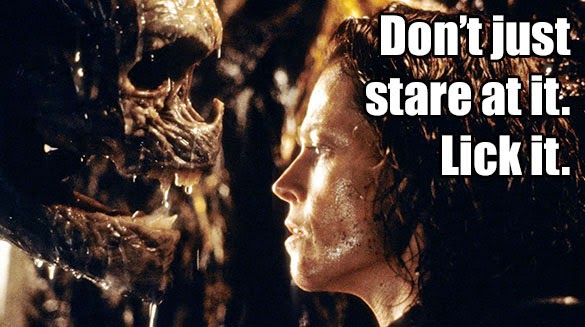 If you're like me (you are NOT like me), you probably [erroneously] thought that the Xenomorph in the original Alien Alien³ (1992) licked the face of Ellen Ripley (Sigourney Weaver) in that famous, tense scene where she cowers against a wall. But you'd be wrong! Like me! No licking! Just heavy breathing and drool! We'd all have to wait 18 five more years for that gross scene to happen. In Alien: Resurrection, an alien/human hybrid looks at Ripley, recognizes her as its mother, and proceeds to lick her face with its long tongue (before being jettisoned from the ship into the crushing void of outer space). It's like, what more is there left to see? A face lick ENDS THE ORIGINAL FRANCHISE.

I rest my tongue.
Posted by Patrick Bromley at 12:00 PM