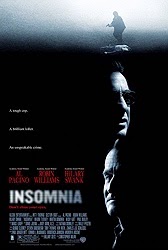 Adam Riske: Insomnia (2002, dir. Christopher Nolan) This movie is really good! Like maybe Christopher Nolan's best ever. In Insomnia, he directed one of the best crime movies of the 2000s; one that is thrilling as well as psychologically complex. The performances are also excellent across the board, with Robin Williams in fine form during his early 21st century villain run and Al Pacino giving a subdued, sad and marvelous performance of his own. I like most of Christopher Nolan's movies, but as his work has become more and more grandiose it sort of makes me wish he would throw us a smaller movie like Insomnia every once in a while. It's excellent work. 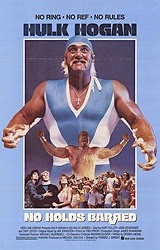 Adam Thas: No Holds Barred (1989, dir. Thomas J. Wright) No Holds Barred drips and oozes with such fun and nostalgia that I couldn’t help having a good time. In one of Hulk Hogan’s first movies, he plays a wrestler named Rip who is the king of the ratings. To unseat Rip, an opposing network releases a “No Holds Barred” tough-man competition that challenges Rip’s television ratings as well as his popularity. The plot is utter nonsense and it appears that the entire script was written by a 10 year old wrestling fan — which is exactly why I had so much fun watching it. No Holds Barred exists in a world where there is only black and white, the bad guys are comically bad, the good guys are super-human boy scouts, and no one has ever heard the word “lawsuit.” It’s 93 minutes of uninterrupted crazy with all the fun of Wrestlemania. 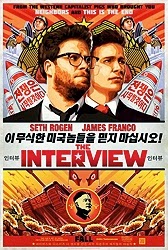 Doug: The Interview (2014, dir. Evan Goldberg & Seth Rogen) Starting tomorrow (Saturday, Jan. 24, 2015), you can stream The Interview on Netflix. Only 30 days after its limited theatrical and VOD release. That's crazy. So watch it! It's really funny! DON'T LET THE TERRORISTS WIN. 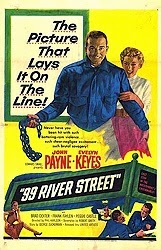 Heath Holland: 99 River Street (1953, dir. Phil Karlson) 99 River Street is director Phil Karlson's follow-up to his 1952 classic noir film Kansas City Confidential. Karlson sticks close to the genre's tropes and casts his previous film's star John Payne as a down-on-his luck boxer who has the world against him. There's a jewel heist, back-alley dealings, double crosses, unfaithful women, and lots of boozing in this fifties crime film. It's not nearly as bleak as some noir entries, which makes it stand out from the rest of the pack, and Payne is excellent as the fragile protagonist. 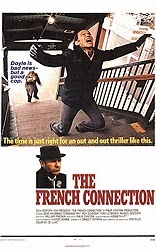 JB: The French Connection (1971, dir. William Friedkin) Not only does The French Connection still "hold up" a full 44 years after winning a deserved Best Picture Oscar, it looks positively avant-garde compared to modern action films. Director William Friedkin takes his time with the exposition and gives his audience credit for actually being able to piece things together on its own. I caught this a few months ago at a Cinemark Theatres classics screening and was amazed at how utterly in the dark Friedkin was willing to keep his audience for the first thirty minutes. Friedkin knows that this technique makes audiences pay MORE attention to what is going on, not less. I fear modern audiences lack the extended attention span to ever make this trope popular again.

The film features a career-best performance from Gene Hackman; gritty, realistic NYC dialogue; and that car chase three quarters in that still impresses and excites. A wonderfully ambiguous seventies-style ending is the cherry atop this particular sundae. Highly recommended. I first saw this film in a high-school film studies class with a hip young teacher who rented it on 16mm so that we might spend three whole periods analyzing that car chase scene shot by shot. Thanks, Mr. Johnson.

NOTE TO NETFLIX INSTANT ADDICTS: According to a recent Slate.com article, watch the following films soon, as they are about to leave Netflix Instant on February 1st: Apocalypse Now  and Apocalypse Now Redux,  From Russia With Love, Goldfinger,  Mad Max, MASH, School Daze, and Zodiac. 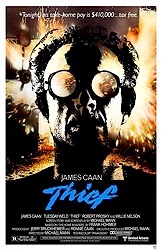 Patrick: Thief (1981, dir. Michael Mann) I usually try to find something either unseen or underappreciated for my NTM picks, but I'm on a pretty big Michael Mann kick right now (thanks, Blackhat) and, as such, have to give in and recommend a movie I suspect a lot of you have already seen. Watch it again, I guess. Thief isn't just a brilliant crime film and a brilliant character study -- it's also a fucking brilliant Michael Mann movie. Hard to believe it's his first. Great performances (maybe my favorite from James Caan, and that guy has a LOT of good performances), great photography, great Chicago scenery, great music. It's a classic because it should be.
Posted by Patrick Bromley at 12:00 PM