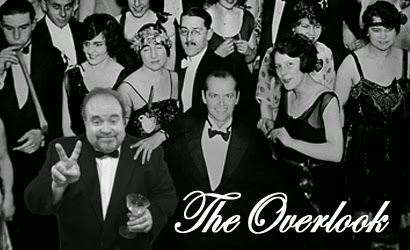 I am back with a bounty of films so obscure, it’s thrilling.


“The Overlook” Declaration Of Principles

1. The films I shall write about in the coming year will be esoteric, lost, or largely forgotten. They will also be fascinating, tantalizing and weird, but in the best way.

“How is this any different than your previous column, ‘Unsung’?” I hear someone on the internets scream. “Well,” I patiently explain, “‘Unsung’ was a series of 52 columns detailing films that I felt had been unjustly overlooked; they were all masterpieces of their kind.” Many of the films I will discuss in “The Overlook” richly deserve to be consigned to the trash bin of history. But we are here because we are interested in the trash bin of history! Each week I’ll bravely scour that trashbin and nyum-nyum garbage to let you know which ones are worth your time.

2. I will here refer to my readers as “babies.” I have never felt comfortable with the term “F-Heads,” which my refined sensibilities find coarse. Please understand that “babies” is an affectionate term. If some of my readers turn obstreperous, argumentative, or annoying, I will then refer to them as “diaper babies.” See the distinction? You’ve been warned, babies.

3. In the cases of films that readers have actually seen, when readers’ opinions differ from mine, MY OPINION WILL ALWAYS BE THE CORRECT ONE—those readers just haven’t come to their senses yet. Poor babies. 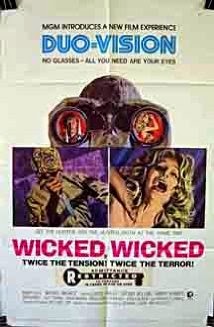 Now here is an authentic obscurity. Never legitimately released in this country on VHS or DVD until last October (thank you, Warner MOD), Wicked, Wicked has occasionally popped up on Turner Classic Movies, but only once in a blue moon.

ANNOYING AUTOBIOGRAPHICAL PAUSE: I first saw Wicked, Wicked at a real movie theater when I was ten. My mother uncharacteristically treated me to a double feature; we saw Wicked, Wicked and Westworld. I remember it like it was yesterday—the theatre passed out cool cardboard guns to all of us kiddies. The two-dimensional gun had a hidden paper flap and when you held the gun and brought your hand down fast (the way a murderous robot might) the hidden paper flap would bang like someone popping an inflated paper bag... Boy, I wish I still had that cool cardboard gun right now! Did I just dream this?

Nope! It’s a real thing. It looked like this: 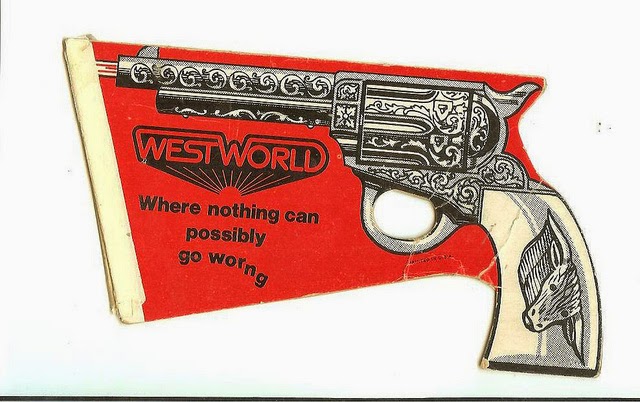 In fact, Warner used a similar kiddie toy promotion the following year for Blazing Saddles, even though Blazing Saddles was Rated R. I didn’t first see Blazing Saddles until I was fifteen; Warner rereleased it 1977 to drum up excitement for Mel Brook’s upcoming High Anxiety. I drove with my friends to the Elk Grove Theater where I was turned away—turned away, I tell you!—for not being seventeen. (This was ironic because Blazing Saddles was originally rated PG; Brooks asked for the R because he wanted parents to be well warned of the film’s excessive crude humor.) So my friends and I had to drive over to the Arlington theatre, where they promptly sold me a ticket. Victory!

Now, what was I talking about? Oh, Wicked, Wicked. 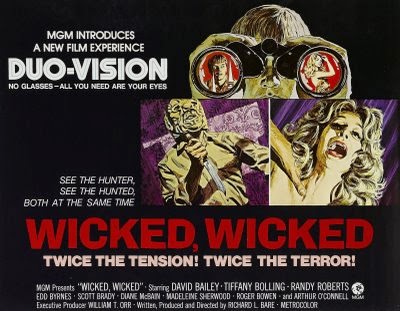 THE PLOT IN BRIEF: Blonde women are being murdered in a fancy hotel. It couldn’t be that creepy-looking handyman (Randolph Roberts), could it? Nahhhhhh. Brunette singer Lisa James (Tiffany Bolling) arrives at the hotel for a gig. The handyman really seems obsessed with her. The handyman couldn’t be the murderer, could he? Nahhhhh. Police Sgt. Ramsey (Scott Brady) convinces Lisa to wear a blonde wig onstage to entice the killer. The handyman fills in for the hotel theatre’s spotlight guy. Boy, that handyman seems even more obsessed with the singer since she started wearing the blonde wig. The handyman couldn’t be the murderer, could he? Nahhhhhh. The police sergeant suspects hotel lifeguard Hank Lassiter (Ed “Kookie” Byrnes). The sergeant is wrong; it’s not Hank. WHO could the murderer possibly be?

Wicked, Wicked was filmed in a “new process” that MGM touted as “Anamorphic Duo-Vision.” (This calls to mind John Goodman’s character Lawrence Woolsey in Joe Dante’s Matinee touting films in “Rumble-Rama” and “Atomo-Vision!”)

MGM assured potential patrons that no glasses were required for this amazing new process: “All you need are your eyes!”

Well, Thank God for THAT.

At what exactly was Wicked, Wicked’s “Anamorphic Duo-Vision? Wait for it...

Split screen. The ENTIRE goddamned movie is in split screen. Check out the trailer, which cleverly avoids giving away the secret by using the tired old trope of showing it in “single screen”:

Ninety-five minutes of split screen could work if director Richard L. Bare were more skilled at balancing the stereo frame and providing more visual cues as to which side the audience should focus on. Sometimes it works as a kind of 1970s cinematic PowerPoint presentation, as characters on one side of the screen reference objects being shown to the audience on the other side of the screen (murder clues, flashbacks, and newspaper headlines) but most of the time it is a confusing, annoying distraction. There is a reason that Wicked, Wicked is the ONLY film ever filmed in Anamorphic Duo-Vision. 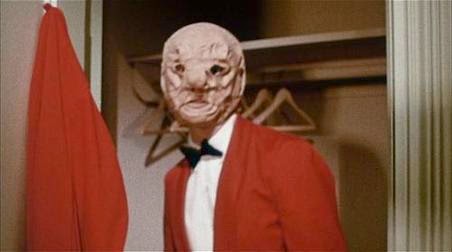 TRIVIA NOTE: Wicked, Wicked was filmed at the Hotel Del Coronado off the coast of San Diego, the very same hotel that was featured in the classic Billy Wilder comedy Some Like It Hot. At least Wicked, Wicked has one thing in common with a classic film! One. Thing.

But wait! The movie’s music consists entirely of selections from the original pipe organ score from the Lon Chaney Phantom of the Opera. Is this the producers engaging in an epic shout out to an older (better) film, or were they just trying to do post-production of this turkey on the cheap and the Phantom score was handy?

Here’s the title song, which I must advise, readers will not be able to get out of their heads once they have heard it. Gee, do you think the guy running the spotlight is the killer? Nahhhhhh.

THE CRITICS RAVE: Doug Thompson of The Alton Telegraph wrote, “[The] direction is erratic and sloppy and acting by the principals is appalling.” Mike Meserole commented in The Berkshire Eagle that, “ Duo-Vision is geared more for action than acting, which is fortunate because Wicked, Wicked has plenty of the former and none of the latter.” The San Mateo Times’ Barbara Bladen wrote, “There may be laughs to be had for someone with a strong stomach for blood but the [. . .] film’s more grisly scenes quite choked them back on me.” Paul Mavis of DVDTalk.com lovingly called it “Crappy, Crappy.”

The film was only ever released on VHS in Germany and Finland. Say what you will about the Finns, they know what they like (and what they like is reindeer sausage and Wicked, Wicked.)

THE BOTTOM LINE: Some films are so bad that they’re a lot of fun; Wicked, Wicked is so bad that it is just a lot of bad. You can probably scratch Wicked, Wicked off your must-see list, babies. Because the inept screenwriter and clueless director tip their hands way too early as to the identity of the real killer (no spoilers here, but could it be THE HANDYMAN?), the film becomes less a mystery or thriller and more a “how-to” manual for beginning psychopaths.
Posted by Patrick Bromley at 5:00 AM