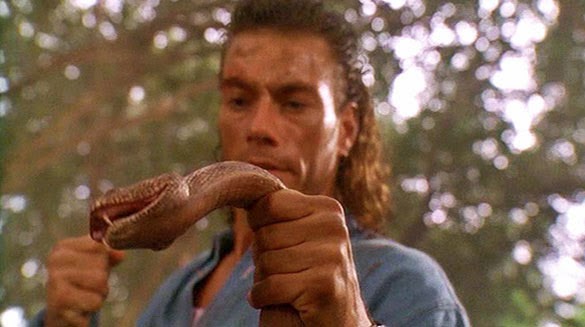 Inspired by snake puncher Jean-Claude Van Damme's BRILLIANT snake punch in Hard Target, this list takes a look at movies in which a character fights (i.e., "snake punches") an animal.

If you didn't participate in this past weekend's #FThisMovieFest 4, you missed out on the best GLOBAL reaction to one of the most ridiculous scenes in recent movie history. Chance Boudreaux (Jean-Claude "Because My Mama Took One" Van Damme), a badass drifter with a heart of gold, snatches a rattlesnake the instant before it bites bug-eyed beauty Nat Binder's (Yancy Butler, visiting Earth on an alien-exchange program) supple neck. He taunts it with a slap, then cold-cocks it as it rises up in snanger (that's "snake anger"). Millions of years of evolution can't compete with Belgian pugilism. JCVD's all, "Screw herpetology, I study the SWEET SCIENCE." 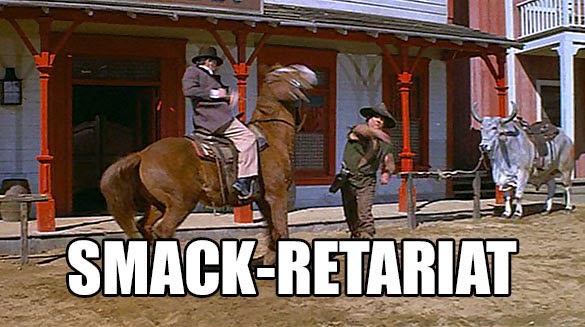 In a movie full of juvenile jokes (most of which I love), Mongo (Alex Karras) punching a horse is by far the funniest. Apparently, the horse punch was based on a true story. According to Sid Caesar's 1982 biography, Where Have I Been, he once punched a horse between the eyes (which KNOCKED IT OUT) when it caused his wife some trouble. Brooks heard about it (they both worked on Your Show of Shows), and used it in the film. Would you believe that the head of Warner Bros., Ted Ashley, wanted that scene removed (along with the characters farting around the campfire and the copious use of the "N" word)? STUDIO STIFFS, amIright? Thankfully, Mel Brooks had final cut control in his contract.

Schwarzenegger beats up a bear in Central Park. In one shot, you can see that the bear is wearing shoes. NEXT!

Guy just can't stop fighting animals. And, not to be outdone by Mongo in Blazing Saddles (see #2), here our eponymous hero drunkenly snake punches a camel (on the commentary, Schwarzenegger calls it his favorite scene). In the sequel, Conan the Destroyer, he punches the "same" camel AGAIN, then follows it up by knocking out a horse (much to PETA's chagrin). In real life, Schwarzenegger had issues with the camel (he had never ridden one before), and it would constantly walk him into a wood beam. I guess you could say that the dromedary was a real ... drama queen (YEEEEAAAAHHHH!!!!!). 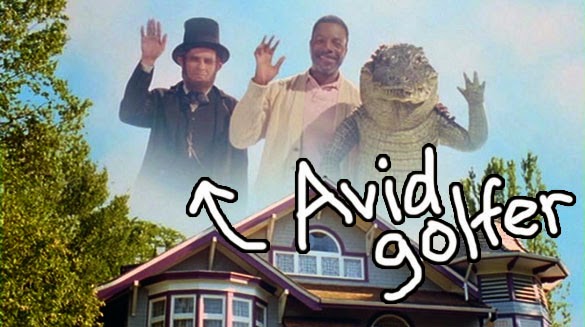 Chubbs' (Carl Weathers) professional golfing career was cut short when an alligator ripped off his hand during a tournament in Florida. So when Happy (Adam Sandler) spots the alligator during one of his games, he decides to settle the score. Later in the film (SPOILERS), Happy presents the severed alligator head to Chubbs, causing him to stumble backwards out of an open window and fall to his death. My favorite joke of the film is at the very end -- we see the ghosts of Chubbs (now with both hands) the alligator and Abraham Lincoln. I also love the stock footage shot of the real alligator scurrying into the swamp juxtaposed with the incredibly fake alligator puppet that Happy snake punches in the face. Ahhhh ... does anyone else miss the days when Adam Sandler movies were FUNNY?

Westley (Cary Elwes) wrestles (and snake punches) a Rodent of Unusual Size (literally a little person, Danny Blackner, in a rubber rat suit [like, for real]), in order to save Buttercup (Robin Wright) in the Fire Swamp. Buttercup: "Westley, what about the R.O.U.S.'s?" Westley: "Rodents Of Unusual Size? I don't think they exist" [he is immediately attacked by an R.O.U.S.]. On the day Blackner was supposed to fight Elwes, he was nowhere to be found. He was pulled over for drunk driving the night before, and spent a few hours in jail (the '80s!). Evidently, the cops didn't believe his story about having to work early the next day as a rat. 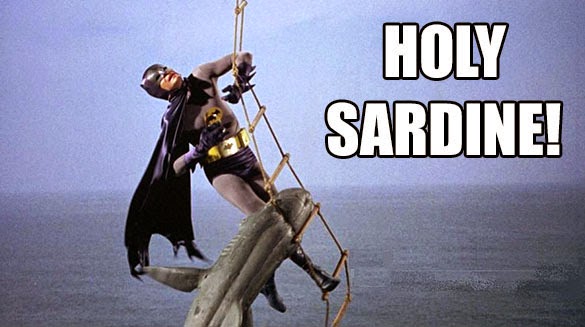 This ridiculous 1966 film (of which I'm a big fan) is based on the Batman television series (the movie came out just as season one of the TV show ended). It's also the first(!) full-length theatrical adaptation of the DC Comics character. This scene is most famous for its reference to shark-repellent Bat-spray. But before our Caped Crusader (Adam West) applies the repellent, he gives the rubber fish several solid snake punches right on his rubber head.

If you're anything like me, you saw Semi-Pro when it was originally released in theaters. If you're also like me, you don't remember ANYTHING about Semi-Pro, including this gimmicky "Bear Boxing" sequence between Jackie Moon (Will Ferrell) and Dewie the Bear. Here's an example in which our protagonist (in this case, Ferrell) doesn't win the day. In much, much sadder news, the grizzly bear (real name: Rocky, five years old, 7.5 feet tall[!] and 700 pounds[!]) featured in this scene actually killed its trainer a short time later. While working with the WILD ANIMAL at "Predators in Action" training facility, the bear attacked Stephan Miller, 39, with a bite to the neck. The coroner's office and the California Department of Fish and Wildlife later ruled Miller's death accidental, and did not order the bear to be euthanized. 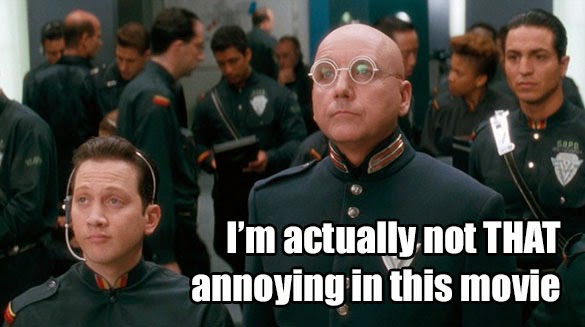 And you guys thought Rob Schneider wasn't funny! Sure, while this scene contains no actual snake punches, it does feature Marvin (Schneider) giving an orangutan a titty-twister. Comme ci comme ça.

Bruce Le (NO RELATION [pay close attention to the spelling]) snake punches a bull in this 1980 "Bruce-sploitation" martial arts movie. The clip above is a little repetitive, but stick with it. The final blow is pretty alright. And by "alright," I mean there's an animation of the bull's head splitting down the middle. 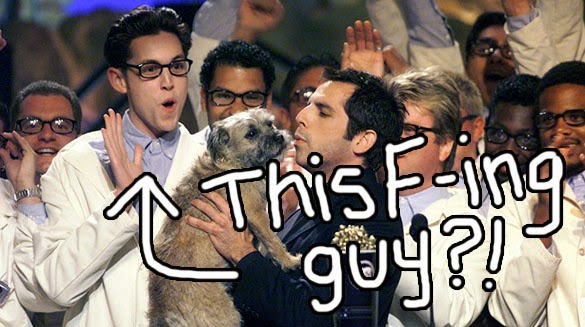 Ted (Ben Stiller) must fight (MUST!) Mary's (Cameron Diaz) dog, Puffy. Some really good slapstick here (coupled with some really hammy testicle biting), and I especially love the dog blocking Ted's attempt to poke him in the eyes, Three Stooges-style. The scene ends tragically/hilariously, as Ted ducks Puffy jumping (being thrown) at him, and ends up hurling himself out an open window (just like Chubbs!).
Posted by Patrick Bromley at 5:00 AM