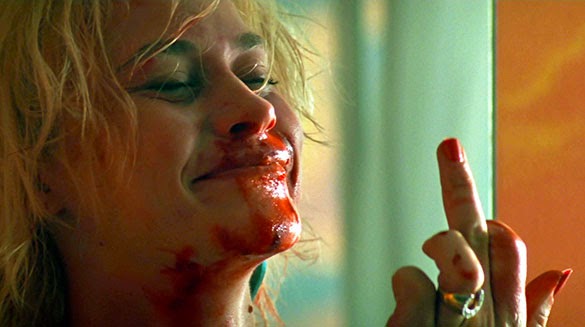 Patricia Arquette deservedly won an Oscar this past weekend for Boyhood, which reminded me of her even better performance in True Romance (featured during this year's #FThisMovieFest), a film in which she fends off Virgil (James Gandolfini) using a can of hairspray as a makeshift flamethrower. Here are some others examples of movies that include this improvised weapon.

Dr. Ross Jennings (Jeff Daniels) achieves a near-pyrrhic victory by using an aerosol can flamethrower against an Amazonian hybrid queen spider who's been ravaging his town with her legion of poisonous minions. His body bloodied, his house destroyed and his spirits totally skeeved out by, you know, THOUSANDS of arachnid drones, his impromptu weapon succeeds in destroying a gnarly egg sac. However, fire isn't enough to kill the queen or her commanding general -- the queen gets electrocuted, while the general gets impaled by a nail gun. Totally awesome villain deaths (if you ask me [ARE YOU ASKING?]), but even the demise of these wicked creatures cannot prevent EVERY SINGLE TICKLE from convincing me that there's a new nest of creepy crawlers living somewhere in my bed. 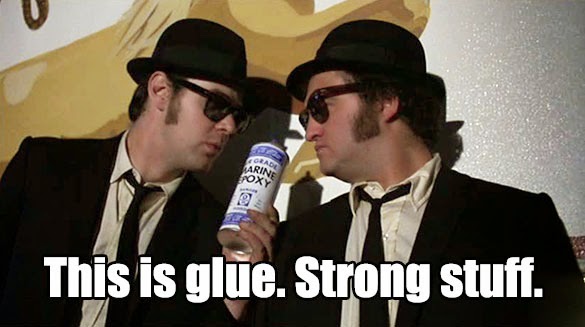 Of all the tricks up the brothers' Blues' sleeves, Elwood's (Dan Aykroyd) can of "Air Grade Marine Epoxy" is one of the best. It's so ridiculous -- he works at a glue (or generic canning?) factory, and stows a couple cans in his trusty black briefcase before his and Jake's adventure begins (this silly sequence is one of the film's justifiably deleted scenes). He uses the glue to sabotage his hillbilly pursuers' Winnebago, and to disable the elevator inside the Cook County Building by igniting its flammable contents with a Zippo, and then torching the elevator's wiring. Sure, he doesn't use the aerosol flamethrower as a "weapon," per se, but I'd be remiss if I didn't include one of my favorite movies in this write-up. 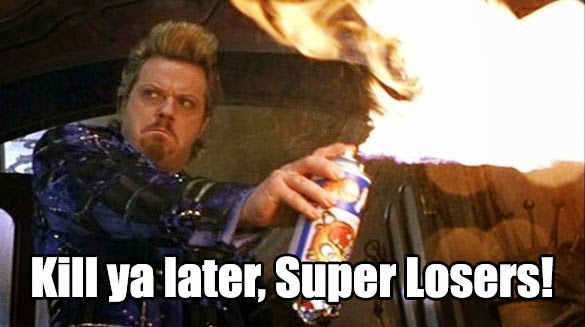 The evil Disco Boys gang is led by Tony P (the "P" stands for "Pompadour," played by Eddie Izzard). He uses two weapons against our titular heroes -- a golden gun (destroyed by the Sphinx [Wes Studi]), and a customized spray can flamethrower (used during his final battle at Casanova Frankenstein's mansion with the Bowler [Janeane Garofalo]). SPOILER: he is killed when the Bowler attacks him with a bowling ball containing the spirit of her father, Carmine The Bowler, whom Tony P had previously murdered. So, I guess it goes: GHOST! FIRE! GHOST PUTS OUT FIRE! [BATTLE BEASTS!]. 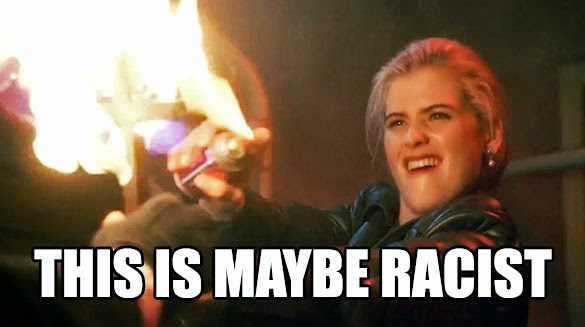 Buffy Summers (Kristy Swanson) -- facing the main heavy in this original film from 1992 -- whips out hairspray and torches Lothos (Rutger Hauer). And, true to every movie from the early '90s, the fireball is accompanied by a clever one-liner (that also happens to be a callback to an earlier scene): [Buffy holds up a cross] Lothos: "This is your defense? Puh-lease. Your puny faith?" [he holds the crucifix, and it bursts into flames]. Buffy: "No" [she removes the cap from a can of hairspray]. "My keen fashion sense" [she sprays the flames, shooting them at his face]. That line again: "My keen fashion sense." Uh-huh. Once again, the flamethrower only injures the villain -- Buffy has to fight him again (this time in the school gym), finally staking him through his no-good vampire heart.

Rorschach (Jackie Earle Haley) goes to former villain Moloch's (Matt Frewer) apartment to question him about some missing money. Only Moloch's already dead, and the cops are waiting outside. In the immortal words of Admiral Ackbar, "It's a trap!" Skip to 1:58 in the above clip to see Rorschach utilize a hairspray flamethrower to incinerate three SWAT officers before switching, OF COURSE, to a rock-climbing bolt gun and good ol' fashion fisticuffs. Hmmm ... the more research I do, the more I realize that a hairspray flamethrower ain't the best weapon. 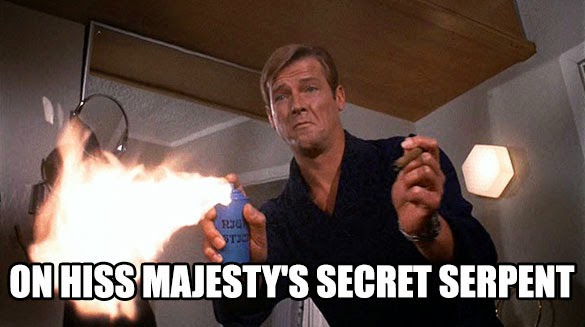 To exterminate a venomous snake, 007 (Roger Moore) uses his cigar and a can of aftershave to create a flamethrower. This is one of the few weapons James Bond improvised in the field (i.e., not crafted for him by Q). Also, this is the second snake he dispatches in the movie (a movie, mind you, FILLED with snakes) -- the other one he shoots in bed. Like, he just takes out his gun and shots the thing. Classic Bond. 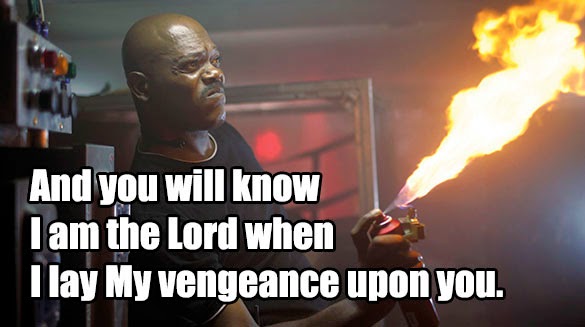 Speaking of snakes, Neville Flynn (Samuel L. Jackson) uses an improvised flamethrower at 30,000 feet in this ridiculous film (just ask Patrick -- he's seen it twice [on purpose!]). The aforementioned weapon is constructed out of a can of bug spray and a lighter by flight attendant Claire Miller (Julianna Margulies), a former (get this) pyromaniac. ALL OF THIS MAKES SENSE. Flynn uses the flamethrower in the plane's baggage hold, but, again, quickly upgrades to a harpoon gun. Because snakes hate harpoons.

Gwen Stacy (Emma Stone) is not only a bug-eyed sex alien, she's also a brilliant scientist (sorry, "chief intern") whose only EIGHT MINUTES away from discovering an antidote ("The antidote is cooking!"). When The Lizard (Rhys Ifans) attacks the Oscorp building, she evacuates everyone else and attempts to seal herself in (because antidote), only to find herself face-to-face with the former Dr. Curt Connors. When The Lizard smells Stacy hiding in the laboratory closet (her potent Lash Potion Mascara by Revlon probably tipped him off), she blasts him with a red-hot serving of FIRE (at about 1:10 in the above clip). But he doesn't care. He steals something important, leaving Stacy alone. Or something. I forget what happens next because the movie is garbage. 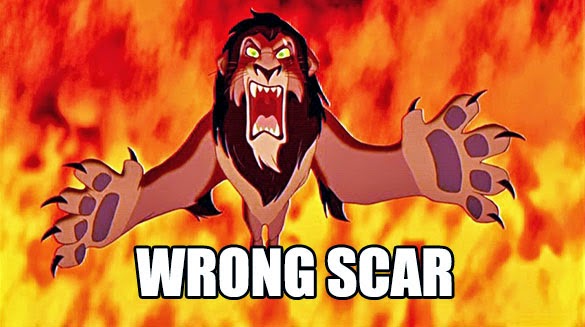 Charles Bishop Weyland (Lance Henriksen) has the coolest inhaler ever, and he uses it (along with a flare) to try to set the Predator hero(?) "Scar" (Ian Whyte) on fire in the Pyramid. But the weapon is weak (NOT A SURPRISE), and Scar just brushes away the flame. Now sensing a threat, Scar quickly dispatches Weyland with his arm spikes. Interestingly (not interesting), the Predator had just previously dismissed Weyland as a non-threat -- he scanned Weyland's body, and discovered that he was riddled with lung cancer (and already dying). Ergo, he lets him live -- he's an unworthy target -- moving on to greater hazards. After he kills him, I HAVE to think he's sad, right? Like, dag, yo. Why'd ya have to go and make me spear you? Predators have feelings too.
Posted by Patrick Bromley at 12:00 PM