Heavy Action: Point of No Return 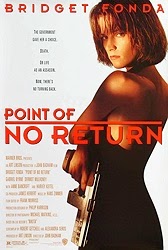 Bridget Fonda is the world's most adorable assassin.

I have often made the argument that John Badham's 1993 actioner Point of No Return, a remake of Luc Besson's 1990 breakthrough La Femme Nikita (aka Nikita), is underrated. Written off by critics at the time, ignored by audiences and relegated only to DVD bargain bins and accidental 2 a.m. viewings on HBO,  Point of No Return is hardly anyone's idea of a successful action movie (or a successful remake for that matter). But at some point I must have convinced myself that I like it, because I returned to the movie in anticipation of 1993 Week (part of F This Movie Fest 4!) expecting to champion it as a film undeserving of its mediocre reputation and worthy of a reevaluation.

I was maybe half right.

The truth of it is that Point of No Return is neither great nor terrible. It is completely middle of the road -- an utterly vanilla action movie in every single way possible, from the generically nondescript title to Badham's indifferent direction to the casting of Bridget Fonda, who lacks any of the edge or sexiness or danger required to make this role work. 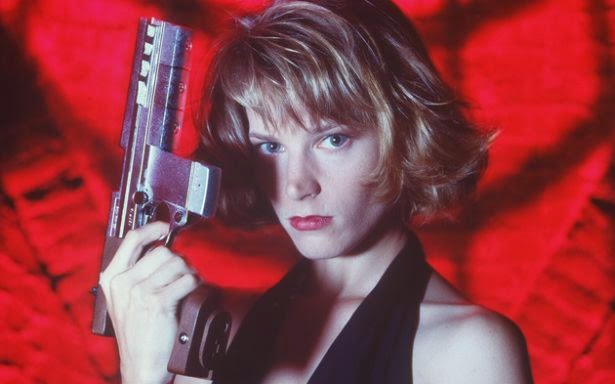 Don't get me wrong. I love Bridget Fonda. Love, love, love her. I have spent the last 25 years (since first seeing and becoming aware of her in Shag, though it was Singles when I really fell for her) nursing a mad crush on that siren. And she's more than capable of being sexy; anyone who saw her in Jackie Brown knows as much. But she's miscast in Point of No Return, which first requires her to be a drug addict piece of shit (even her track marks are cute!) and then a reformed assassin/femme fatale type. It's just not her. She's not even enough of a question mark for the film to make the case that they took an empty vessel and filled her with the knowledge to become a deadly weapon. Bridget Fonda is not a blank. She is the girl who lives next door that is your best friend growing up and you guys comfort one another heartbreak after heartbreak until you finally get your act together and realize you've loved her all along. She's probably on her way to the airport when you figure it out.

Let's back up. Fonda plays Maggie, who, as the movie opens, is a drug addict taking part in a pharmacy robbery that goes bad. Innocent people die and Maggie, high out of her mind, kills a cop. She is sentenced to death by lethal injection, but isn't executed; instead, she wakes up in a secret underground lair where a shadowy government operative named Bob (Gabriel Byrne) tells her she's been given a second chance. She's going to be reprogrammed as an assassin. So Maggie undergoes etiquette lessons from Anne Bancroft and weapons training and is sent back out into the world as Nina (and sometimes Claudia), adorable girl by day and professional killer by night. She meets a dreamy bohemian photographer named J.P. (Dermot Mulroney) and tries to have a normal life, but then the phone calls come, and the calls have targets to be taken out, and then Bob shows up, and then things go bad, and then the agency has to call in a "cleaner" (Harvey Keitel), and then things get worse. 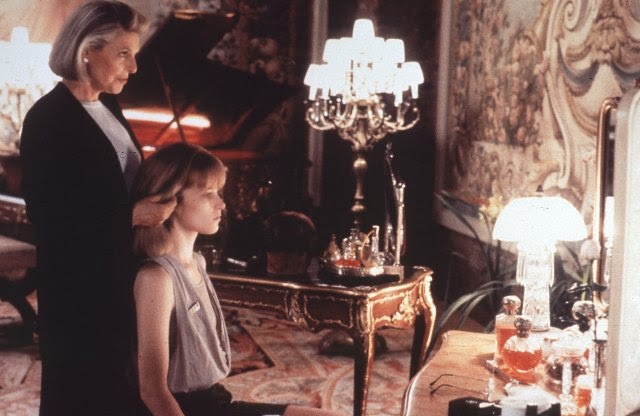 The crazy thing is how much Point of No Return is basically a beat-for-beat, almost scene-for-scene recreation of Nikita. This isn't a case of "reinterpreting" the material or a filmmaker putting his or her own spin on something. This is just turning a French movie into English so that audiences will recognize the stars and won't have to read subtitles. Nikita was a crossover hit -- one of a few foreign films that managed to catch on with certain American audiences (enough that it has since inspired not one but two TV series), so it stands to reason that some enterprising studio exec would want to see it remade. It did ok, too, grossing about $30 million on its release. Honestly, that's about $20 million more than I would have guessed.

There's nothing new about an American remake of a foreign movie losing all the personality in the translation, but boy is that the case with Point of No Return. Luc Besson's movie feels spiky and hip, and it's one of the rare cases in which his madman tendencies actually serve the story he's telling. Star Anne Parillaud feels like someone who might actually be dangerous or at least punk rock -- hell, she even has the Sid Vicious haircut. John Badham is a director I like (the guy made Saturday Night Fever and Blue Thunder and Wargames and Bird on a Wire AND The Hard Way AND Drop Zone), but he's not much of a stylist. This is a story that needs style. It needs to seduce us and to present a world of secret underground organizations and beautiful female assassins. There is nothing about Badham's wet white bread approach to Point of No Return that feels remotely seductive. It's competent and borderline "neat" at times, but never cool and mostly workmanlike. There's no real attitude towards anything. It's just stuff that happens. When I was regularly defending the movie (it was not that regular; no one talks about it), the defense I would mount against those who claimed Bridget Fonda was badly miscast was that of course she was miscast. That's the point. The movie is about someone who shouldn't be an assassin who is made into an assassin. I have no idea what movie I was remembering when I would make this claim, but I'm not sure it was Point of No Return because this movie (and Nikita before it) goes out of its way to explain that the whole reason Maggie is spared and chosen for the program is because she has so much "potential." It's not about turning a regular person into a killer; it's about turning someone who's supposed to be a killer into an even better killer.

And therein lies one of the big problems. Bridget Fonda was never supposed to be a killer. She's not the wild animal Parillaud is at the beginning. She's kind of a brat, nothing more. And she's an adorable brat at that. Like, you just want to put her in time out and then talk to her to make sure she understands that what she did was wrong and then sit on the couch with her and eat ice cream and marathon Gilmore Girls. Even without being left with any other choices, Maggie's transition to assassin makes no sense -- it feels more like something she's neither born nor forced into, but just falls into by accident. Like a marketing job. 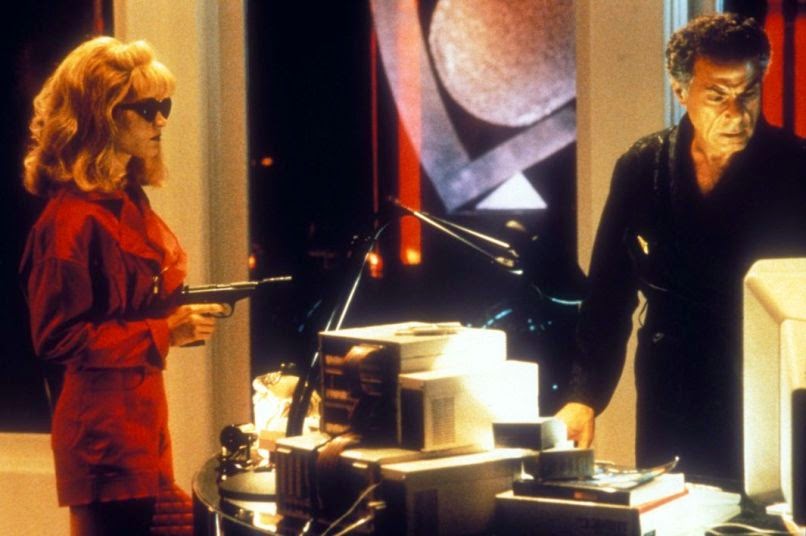 The lack of a clear character doesn't stop Bridget Fonda from giving it her all as she runs the gamut to tweaked out mess to badass killer to weepy romantic in less than two hours. She looks great throughout, particularly during the movie's many sun-kissed sequences on the beaches of Santa Monica. She gets to change costumes like a proto-Sydney Bristow and impersonate Olivia d'Abo. She gets to have sex and shoot guns and basically do everything that her male action star counterparts usually get to do, and while she seems out of place doing a lot of it I'm still happy that there's a movie that exists in which she gets to do it at all.

It's too bad no one else really makes an impression. Dermot Mulroney is just a cipher -- he's the male equivalent of what Nathan Rabin coined the Manic Pixie Dream Girl. Anne Bancroft appears because paper covered rock three times. Harvey Keitel's participation is noteworthy primarily for how it anticipates his similar role as Winston The Wolf in Pulp Fiction in 1994 (I can't imagine Tarantino had Point of No Return in mind when he dreamed up that character/actor pairing, but then again he's a huge weirdo and I wouldn't put it past him). Gabriel Byrne is on hand to do what he always does: wear black clothes and brood. His relationship with Maggie is confusing in that it is sometimes fatherly but other times smacks of unrequited love. Luc Besson would go on to explore this dynamic in a more investing way just a year later with Léon the Professional, but Badham's movie doesn't seem interested in the psychology of its characters. It's just a bland imitation of something better. Point of No Return is your dad trying to describe a Nirvana show he once went to.
Despite the fact that it's not quite the underrated would-be classic I've carried around in my head for years, I still like Point of No Return. It has more to do with my affection for Bridget Fonda and for a specific look that action films had in the early '90s than it does with the movie's quality. It remains, at best, very watchable, like a cover of a pretty song that loses the soul but retains the melody. Besides, there just aren't enough action movies with female leads, and this is one that rests entirely on the adorable shoulders of its star.

Luc Besson must not hold a grudge; in 2001, he wrote and produced Kiss of the Dragon starring Jet Li and -- you guessed it -- Bridget Fonda (the bad guy in the movie is played by Tchéky Karyo, who played Bob in the original French version of Nikita). It's stupid but entertaining in the way that most Besson productions are, but Fonda is stuck playing a prostitute who, unlike in Point of No Return, just gets to stand around and be scared while Jet Li does all her fighting for her. It was pretty much the last movie in which she appeared; she hasn't made a movie in 14 years. In the meantime she married Danny Elfman and had a baby. There were some dark years for me until Zoë Bell jumped onto the hood of my car to play Ship's Mast and became my girlfriend.

Come back, Bridget Fonda. Point of No Return might not be a great remake or a great action movie, but the world needs you. You were sweet and full of decency, except when you played a bad girl. You played a bad girl well. Most of all, though, you never, ever gave a bad performance. Not even in Monkeybone.