Off the Shelf: Sanctimony (DVD) 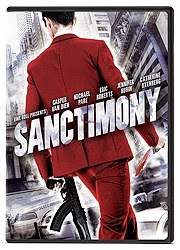 Now you can see where Uwe Boll got his start!

I know it's easy to write off writer/director Uwe Boll's movies because he became a punchline early on in his career. Nowadays, most of the people who name him as the "worst working director" (see any list made at IMDb) haven't seen a movie of his since BloodRayne -- if they've seen one at all. But because I'm either a masochist or because I'm willing to give every new movie a fair shake and take it on its own terms, I have seen my share of Boll's output over the years. Not all of it is terrible. Yes, a movie like Rampage is repellent, but it succeeds at what it wants to do (which is largely to repel us) and does so with competence and, dare I say, occasional artistry. Postal is a crazy mess, but deliberately so. It is a dirty bomb of comedy, and while none of it is particularly funny I can still appreciate what Boll is attempting. On the flip side of that are his "lesser" efforts, which are flat and wooden and lead-paced and really, truly don't even feel like actual movies. A bad Uwe Boll movie is like no other bad movie, and that is not intended as a backhanded compliment.

Sanctimony, his English-language debut and a pretty blatant American Psycho imitation from 2000, exists somewhere in the middle of his filmography. It's neither an unwatchable disaster nor good enough to be considered one of his best. It feels in many ways like the majority of direct-to-DVD thrillers, bad in the way that Asylum movies are bad (it even has an Asylumesque cast), but more ugly and mean-spirited. Those seem to be the kinds of movies Uwe Boll makes most. 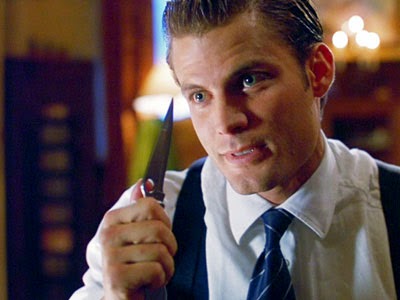 Casper Van Dien plays Tom Gerrick, a Wall Street genius who makes his fortune sitting alone in a darkened lair of an office with only a desk in the center -- and this is for his legitimate day job. That's just one of the many details about Sanctimony that feels ridiculous, as this is a movie that knows nothing about real life and is informed only by other movies. Gerrick is also a serial killer, who has already claimed and mutilated six victims. On his trail are detectives Jim Renart (Michael Paré) and Dorothy Smith (Jennifer Rubin). As they close in, so too does Gerrick's desire to be caught, leading to a brutal shooting spree that steers the movie from derivative to utterly preposterous.

Ah, but there it is. What would a Uwe Boll movie be without a climactic murder rampage? Shooting sprees have become to Uwe Boll what Catholic guilt and crime are to Scorsese or voyeurism is to De Palma. When Andrew Sarris argued for the auteur theory, I'm not sure Uwe Boll was what he had in mind. Yet movie after movie, Boll profiles characters who either begin as psychotics (Sanctimony, Rampage) or are driven to the point of violence (Postal, Assault on Wall Street). The end result is always the same: a white man mowing people down with a gun. What does it say about Boll that this is the motif to which he keeps returning? He is so often dismissed as an incompetent hack -- a guy who makes movies as tax shelters, usually based on video games -- but there seems to be something more insidious going on. If there was any indication that these movies were intended to examine the culture of violence or to consider the chain of events that might lead to such horror, that would be one thing (and, to Boll's "credit," there sometimes is). For the most part, though, his films are just exploitative entertainment designed to push buttons and provoke. He's a kid trying to get your attention by poking you in the back. With the tip of a rifle. 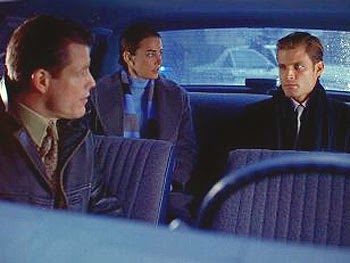 If there is something to enjoy about Sanctimony, it is the cast: as a fan of the kinds of movies of which I am a fan (and if you read this site regularly, you know what those are), there's a certain thrill in seeing a movie with Casper Van Dien from Starship Troopers and Michael Paré from Streets of Fire and Eric Roberts from every movie ever made and Jennifer Rubin from A Nightmare on Elm Street 3: Dream Warriors and Bad Dreams and Permanent Record. She's an actress I haven't seen enough of since the early '90s (my problem, not hers, as she has continued to work), so having her pop up here was a welcome sight. She and Paré don't get to do much but play movie cops -- everything in Sanctimony has been learned and copied from watching other movies -- but better to spend 90 minutes in the company of actors I like, particularly when there's not much else about the movie to enjoy.

At the very least, Boll seems engaged with the material in Sanctimony, which hasn't always been the case in his work. It's shot in scope and directed with a fair amount of style; just because that style is often derivative (including hallucinatory flash cuts on loan from Oliver Stone's Natural Born Killers) should not take away from the fact that at least there is a style. Yes, this is the definition of "grading on a curve," but at least it's a curve comprised of Boll's own work and not the films of more successful or better-respected filmmakers.

It's tough to talk about a movie like Sanctimony, because the stuff that works "best" does so because it's basically a copy of American Psycho and the stuff that doesn't work once again points to less to Boll's limitations than it does to his fucked up preoccupations. There is a "sex" scene which is endless and is mostly a rape (that then turns "consensual," which is even more gross), and another scene at a sex club in which a woman is essentially taunted and tortured for 10 minutes of screen time before being shot in the head (and which has nothing to do with the rest of the movie, really). The movie seems to have some problems with women is what I'm getting at, and the scenes which most clearly exemplify this tendency feel the longest and most sadistically indulgent. 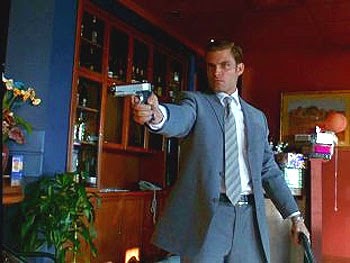 Uwe Boll is an angry filmmaker. He has a reputation for being such; he's the guy known for getting in fights with critics both online and in the actual boxing ring. But there's a difference between being an angry guy (which this behavior would suggest he is) and being an angry filmmaker. I'm only interested in the latter. Sanctimony, like many of the Uwe Boll movies I've seen, is a movie free of empathy or humanity, hopelessly bleak in its worldview. That these are not its most overt qualities (as they would be in future efforts) is only because the movie is more interested in being a genre exercise than in making personal statements. Sanctimony is yet another entry in the the director's filmography that ends with a character trying to destroy all of society (through violence) and watch the world burn. It is the only outcome Boll is able to imagine. It is endlessly unpleasant and difficult to watch, particularly because there is no thematic examination of the causes or outcomes. It is irresponsible shock value.

At least this one was made at a point in Boll's career in which was looking at other movies and wanting to copy what they did. Before long, his copycat attentions would turn toward video games.

Though shot in 2000 and previously released on DVD in 2001, Sanctimony is being reissued by Martini Films, a subset of Chicago-based boutique label Olive Films. It features a short introduction from Boll, who is in good spirits and speaks fondly of the film, which he says was originally called Millenium's End (and changed by the distributer). He also admits it is inspired "a little bit" by American Psycho, which might be understating the matter. It is recommended for Uwe Boll or Casper Van Dien completists only.

Buy Sanctimony from Olive Films here.
Posted by Patrick Bromley at 11:00 AM