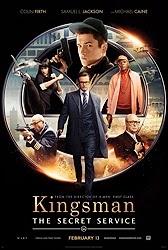 One of 2015's worst-titled movies is one of its best surprises so far.

What Matthew Vaughn did for the superhero movie with Kick-Ass he does for the spy genre with Kingsman: The Secret Service. That makes sense, I guess, as he is -- along with his frequent co-writer Jane Goldman -- once again adapting a comic book, The Secret Service, by Mark Millar (with Dave Gibbons of Watchmen fame). Like with Kick Ass -- still a polarizing movie, I know, but one of which I'm a big fan -- Kingsman is good at being both about the thing and the actual thing. It comments on spy movie tropes while still functioning as a fast and fresh update on the genre. It's surprisingly fun. Because it's a Matthew Vaughn movie, I should have expected as much.

Colin Firth plays Harry Hart, a member of an elite and independent spy network called Kingsman, whose M.O. is to save the world and never get the credit, because getting the credit would mean the world knows they exist. When one of their own is killed in action, they begin looking to recruit a new member. Harry is put in touch with Eggsy (Taron Egerton in a star making performance), a delinquent   whose father -- also a Kingsman -- was killed years earlier as a result of Harry's mistake. Seeing his opportunity to make good on his promise to take care of his friend's family and sensing a chance to prove his boss (Michael Caine) wrong about the need for an upper-class upbringing to make it as a spy, Harry chooses Eggsy as his recruit. While the cadets compete for a spot as a Kingsman, an internet billionaire named Valentine (Samuel L. Jackson) begins meeting with world leaders and celebrities to plan something nefarious as a way to combat climate change. Will Eggsy become a Kingsman? And will the organization be able to stop Valentine before it's too late? 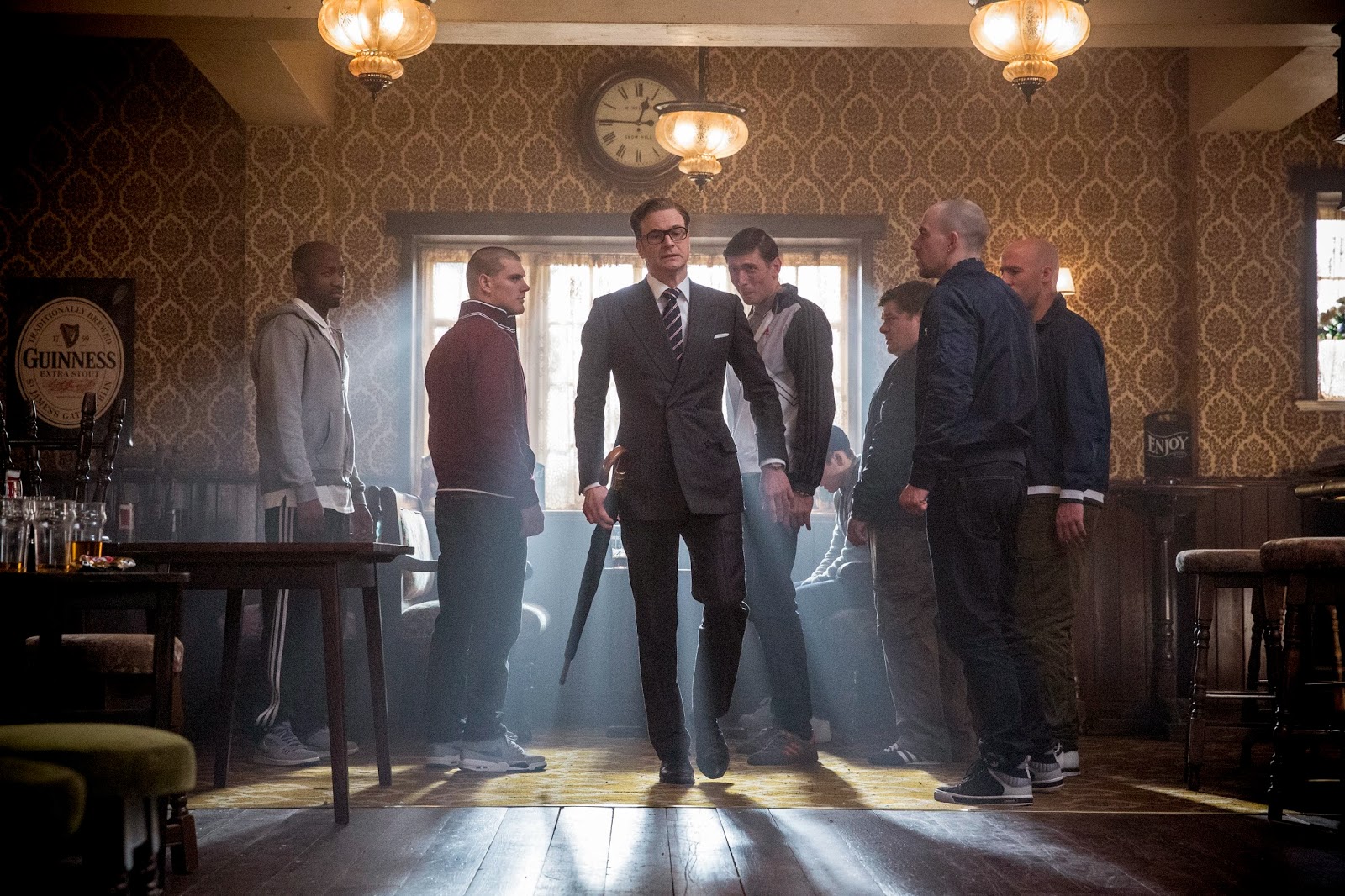 When I say that Kingsman is a lot like Kick Ass, I mean it in a pretty literal sense. Pointing out all of the ways the movies are alike would mean indulging in some big spoilers, so I won't. Suffice it to say that it's about a young man who is introduced to a secret underground world of heroes and villains and has to train and adapt to be among them. There's a Big Daddy/mentor character and many of the structural beats are the same. Remember that amazing action sequence in Kick Ass in which Hit Girl took out an entire hallway of thugs and criminals in spectacular, violent fashion? That's here, too, only in Kingsman it's Colin Firth in a church.

About that scene: it's the showstopper, the one that will ultimately cement the movie's status as a cult classic (just wait) and the one about which even those that don't like Kingsman will be talking. It may be because of Vaughn's incredible staging, which is confident and clear in its long-take, Skynyrd-scored anarchic bloodshed. It may be because of Colin Firth's transformation as an action star; once a fumbling, stammering would-be boyfriend in a series of romantic comedies, Kingsman finds Colin Firth reborn as a fucking kickass kicker of asses. Or it may be because of the very dark implications of just what is happening in the scene. As much as it's an incredibly filmed, visceral and exciting set piece, what's really going on is not like anything we're used to seeing our action heroes do. There's a bit of half-hearted justification in filling the church with hateful, racist homophobes -- real pieces of shit -- but it's a world of difference between normal people with horrible beliefs and the violent criminals we typically find on the business end of a beatdown. 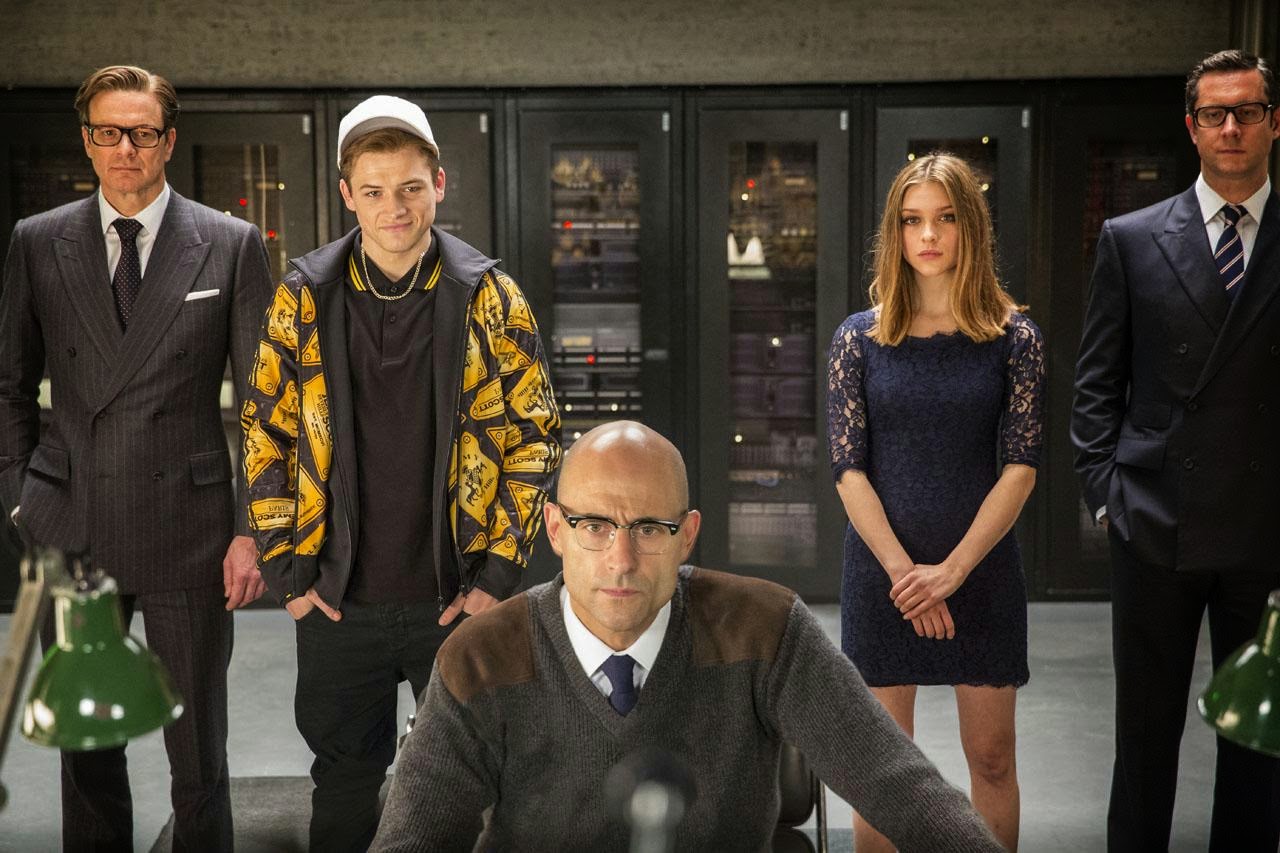 There's an undercurrent of that duality running through Kingsman (which I refuse to call Kingsman: The Secret Service, because it's the kind of garbage title that suggests a battle over what the movie should be titled that ended in a bad compromise in which both options were used) as it does't just slyly take the piss out of spy movie cliches, but also suggests a dark side to something like the Bond series. When it's not taking Bond's tropes to their logical extremes, it's blowing them up outright (this is the first spy movie I can think of that ends with the promise of anal sex). The heroes are not always heroic, the villains not always purely evil -- they even share words at one point about wishing they could switch places. But despite the occasional blurring of the lines in which Vaughn indulges, this isn't the usual nihilistic Mark Millar shit (though some of that brattiness does pop up on occasion). Kingsman is a movie that believes in heroes and believes in being something better. Being a Kingsman isn't about privilege or being born with a silver spoon, but rather trying to be ones best self. The film goes out of its way to point out that Eggsy is just as good a spy (better even) despite his lack of opportunity, even though that's negated some by the fact that he's only able to become a spy because of a very specific opportunity.

Samuel L. Jackson makes some big choices here, a few of which work better than others. He's given Valentine a lisp, which on its face seems self-consciously cute and like it exists just so that when he accuses the English of "talking funny" we can all giggle at IRONY. But it has the added effect of making him seem less threatening, which is ultimately what Jackson is going for -- he's the cheeriest super villain since Xander Drax. He's a likable eccentric who pairs vintage wine with McDonald's cheeseburgers (one of several little digs at American culture Vaughn slips by) and dresses like Spike Lee at a Knicks game. He gets sick at the sight of blood. Even his master plan came about because he's trying to solve the issue of climate change; unlike the common Bond villain, he's not looking to rule or destroy the planet, but rather to save it. Jackson has grown far too complacent in the last decade and a half, usually turning in the exact same performance (Django Unchained aside), so it's nice to see him trying something a little different and having fun on screen. We're a long way from The Octopus. 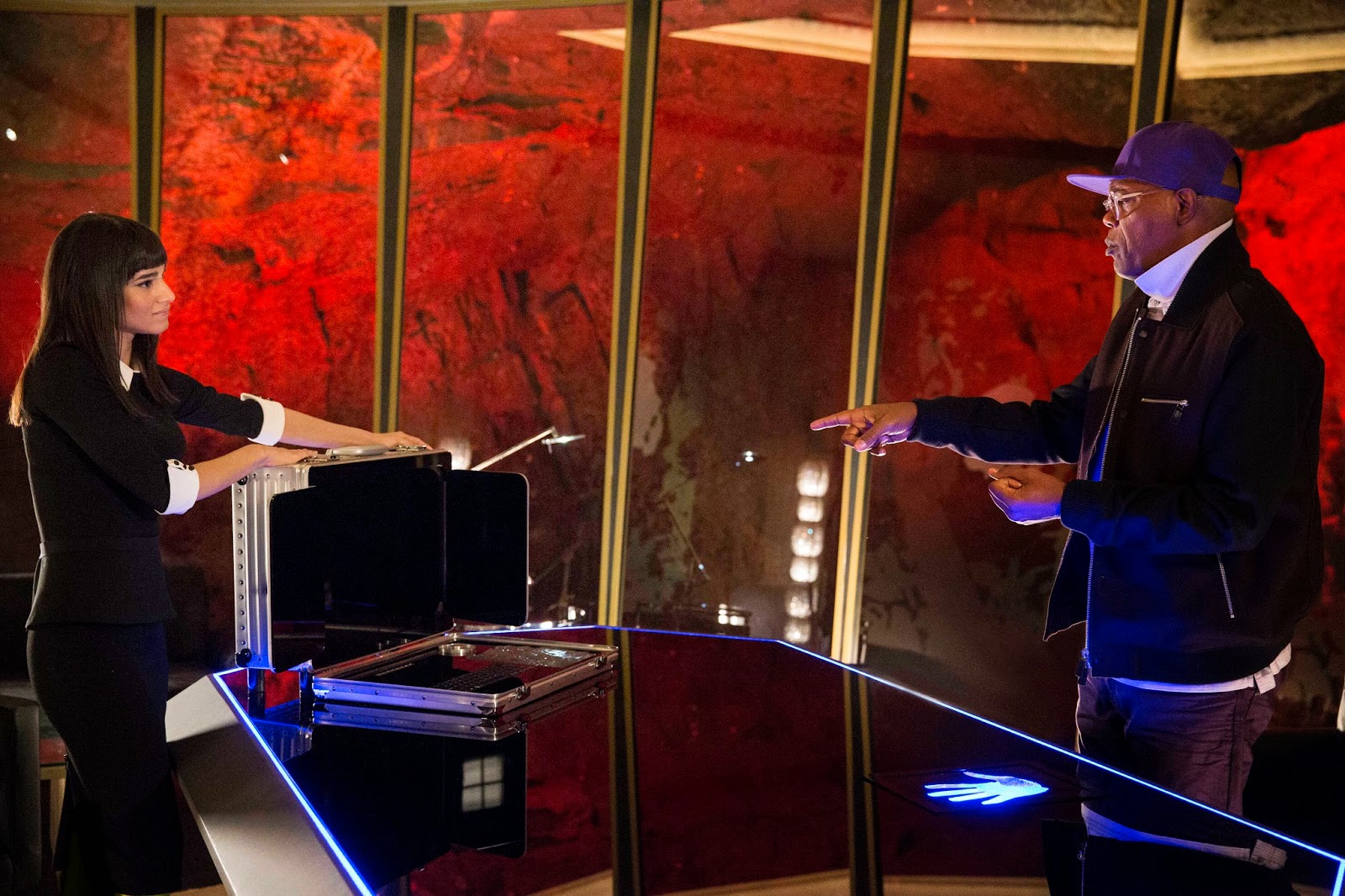 Vaughn and Goldman's script packs in a whole lot of story; the movie feels long, but not restlessly so -- I felt like I was getting a lot for my money. It's hampered at times by bad CGI, breaking the spell and feeling cheap and rushed. One sequence in particular -- another showstopper near the end -- is rendered via cartoonish computer effects, and while it's a distraction during a moment that ought to be transcendent, it's easy to see why Vaughn made the choice he made. Staging it via more practical means would have been gooey to the point of being unwatchable, repulsing and disturbing us instead of getting a big laugh. That's the kind of movie this is: bumpy and a little uneven, but energetic and fun to the point of pushing past its own shortcomings.

I really like these genre movies that Vaughn and Goldman write -- movies like Stardust and Kick-Ass and now Kingsman that work as straightforward exercises in entertainment but which can be unpacked to reveal both deconstructions of their respective genres (fairy tales, comic book movies, spy thrillers) and even have something to say about class differences and a political system that, like in Snowpiercer, needs to be torn down before it can ever be fixed. The movie is smart and it's subversive and while it hardly explodes the British spy mythos, it does offer us the possibility that somewhere James Bond has a snotty little brother who might make a good spy too.
Posted by Patrick Bromley at 12:00 PM