The Overlook: Day of Anger

Is there anything, beside a real bowl of spaghetti, more satisfying than a good Spaghetti Western? I think not. The joy I experienced when screening Arrow Films’ new restoration of the little-known Tonino Valerrii movie Day of Anger cannot be charted. For I am Italian… and I wish I could kill my many enemies like the very cool Lee Van Cleef does in this film.

It just doesn’t get more “1960s Spaghetti Western Cool” than Day of Anger’s opening titles. Played out over impressive music by composer Riz Ortolani, these animated credits are a bizarre mix of Maurice Binder’s work in the James Bond films and the opening credits of the television series The Wild Wild West. They even feature a tiny, animated Lee Van Cleef shooting certain names right off the screen—bang, bang! It is all here: animation, solarization, intense primary colors. The only things missing are Clint Eastwood… and meatballs. 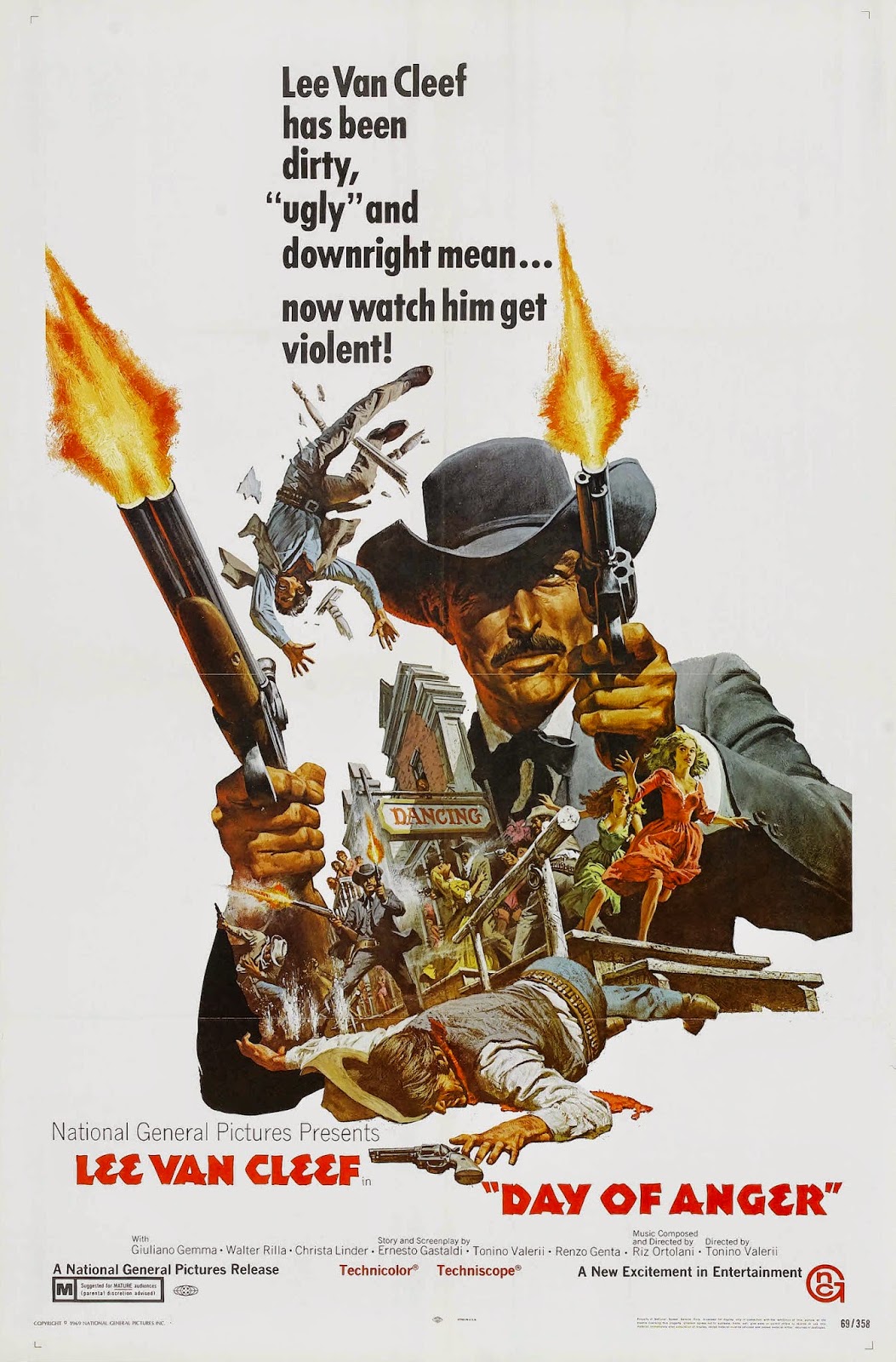 The Plot in Brief: Scott (Giuliano Gemma) is ridiculed and despised by all of the townspeople in Clifton, Arizona. Born to a prostitute mother who died shortly thereafter, Scott is the town bastard who gets no respect. We first see him lugging a barrel down the main street and collecting gallons of tobacco juice from the town saloons’ many spittoons. Yuck.

Soon gunfighter Frank Talby (Lee Van Cleef) rides into town and takes a liking to Scott. Talby thinks Scott should start sticking up for himself, so he schools him in the art of being a man.

3. Never get between a gun and its target.

4. Punches are like bullets; always make the first ones count.

6. The right bullet at the right time.

7. If you untie a gunman, take his gun first.

8. Accept all challenges, no matter the cost.

9. When you start killing, you’ll find you cannot stop.

Is Talby honestly helping Scott, or is Scott only a pawn in Talby’s game? Who is worse—outlaw Talby or the men who oppose him? Why is Talby so interested in guiding Scott? And why on earth is the town sheriff named Nigel?

From the opening shot, it’s apparent that this is an impressive transfer; the film looks like it was made yesterday. The image is rock steady, in crystal clear focus, and the colors pop. This once again reminds us that indifferent, grainy film transfers—often in the wrong aspect ratio and rushed into quickie VHS and DVD releases by unscrupulous video companies—are a sin. For twenty years, we’ve thought that old movies simply look like shit; transfers like this from boutique labels that actually care (I’m thinking of Arrow, Olive, Shout/Scream Factory! and Kino Lorber) prove not only how great they can look, but give us a glimpse of how great they must have originally looked on the big screen. Lackluster transfers are lazy, but the real sin is that they vandalize our cultural heritage.

Fuck them, I say. Fuck them. 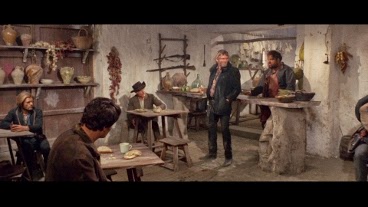 Clearly the transfer would not matter if the film itself were not such a work of art. I was not familiar with the films of Tonino Vallerii (he was Sergio Leone’s assistant on the second and third films in the Dollars trilogy), but he is an expert at how to frame a shot for maximum dramatic impact. Early on we see a stunning “multi-plane” shot where Vallerii places objects between the camera and a moving cowboy during an extended tracking shot that renders an almost 3-D effect. Throughout the film, the director gives us interesting frame compositions in depth: there are often important or amusing details in the foreground or deep background of a shot. Many of his compositions resemble the iconic paintings of Frederic Remington.

One of the most magnificent widescreen compositions involves Talby riding out into the desert, empty and foreboding for as far as the eye can see, while the camera relentlessly zooms out to reveal more and more desolation. Then we notice the shadow of an enormous cloud lazily drifting over the landscape. Stunning.

Vallerii also knows how to pace the action. I was surprised that Van Cleef’s character shows up so early in the film, but I was reminded of Roger Ebert and his Brotman’s Law about the movies: “If nothing has happened by the end of the first reel, nothing is going to happen.” We are also offered clever editing flourishes—as when Talby taps his empty shot glass on a saloon table, and Vallerii quickly cuts to a judge banging his gavel in a courtroom. 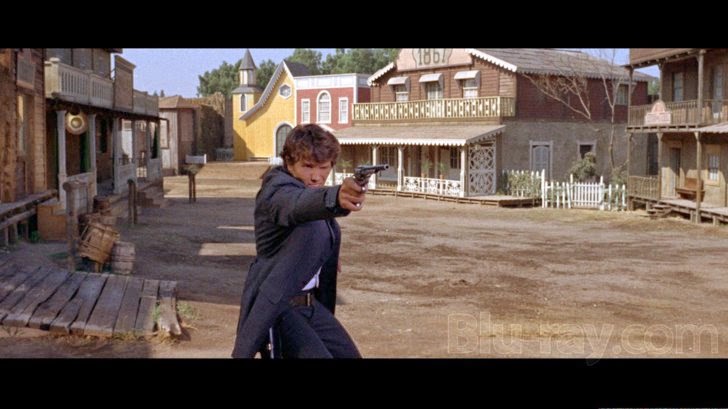 The dynamic between mentor Talby and his protégé, Gemma’s character Scott, is a familiar one in Westerns, but never resorts to cliché here. There were times when the two reminded me of the troubled relationship between young Jeffrey Hunter and John Wayne in The Searchers. (It is always a good thing if any part of your film is being compared to John Ford’s The Searchers.)

Riz Ortolani’s score is rich, evocative, and never intrusive. At times it drips with such “Spaghetti Western-ness” it almost sounds like a parody of itself. Almost. When watching the film, I began to think that I had heard pieces of the score before. I was right—Quentin Tarantino repurposed pieces of it for his Django Unchained!

Day of Anger also benefits from huge, standing sets left over from previous Westerns shot at Rome’s Cinecitta studios. In fact, the lived-in quality of the buildings, authentically weathered by the elements over a number of years, adds a verisimilitude that greatly benefits the story. 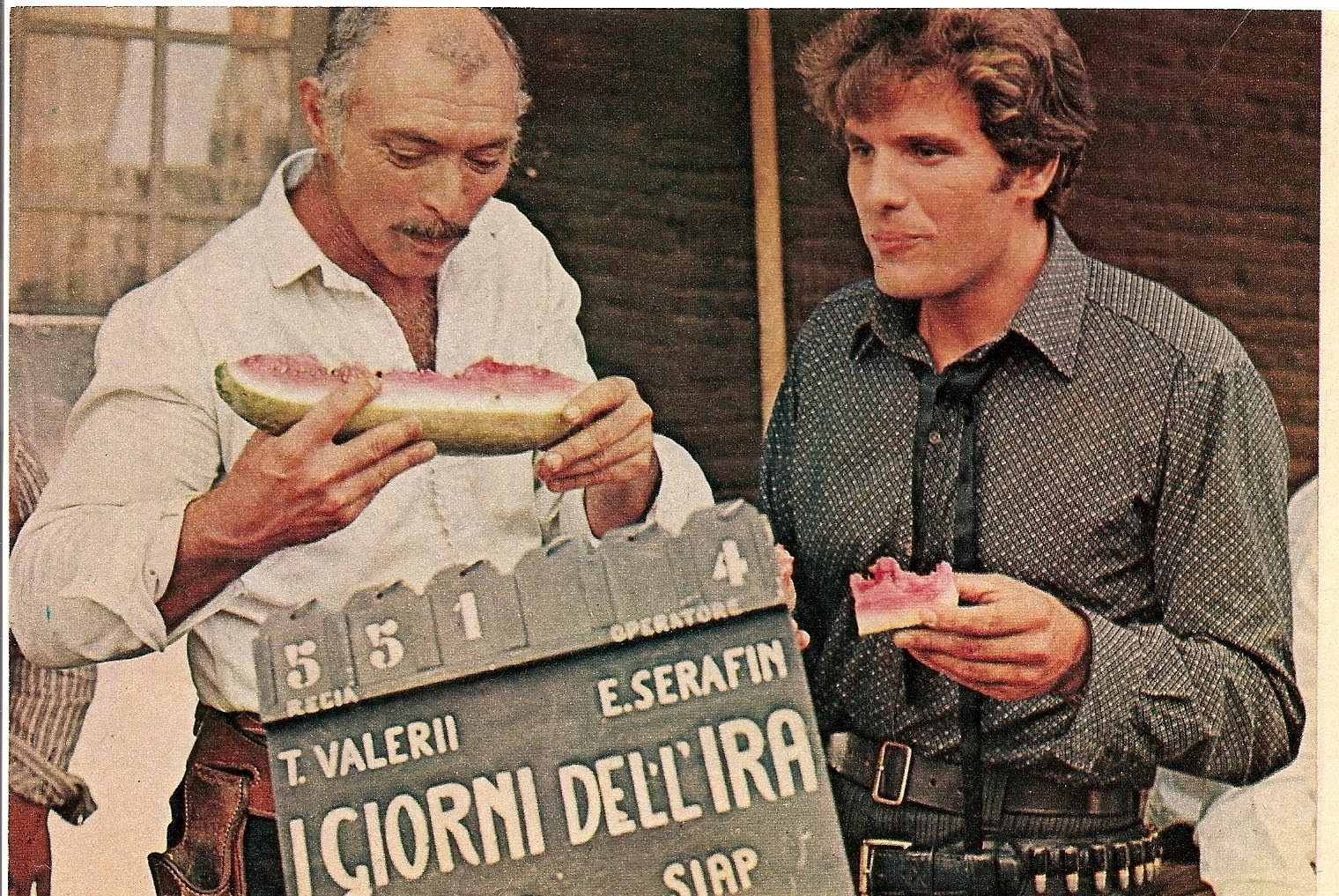 CAVEAT: The length and pace of this film are not for everyone. Though it is evident throughout why the studio prepared a shorter “International Version” for other countries, including America, I went with the longer Italian cut, and I’m glad I did (the shorter version is also included on the disc.) Except for one (seemingly) superfluous musical number, I did not find the film overlong at all; I found it epic. For me, the movie really explores how the character of Scott moves from the first stage of his life to the second. Besides, I never really tire of one of the Western’s oldest stories: A lone man who lives by a code teaches others, by his own example, how they should live their lives.

You just need a gun and courage, pardners.

The film is interested in charting the progress that inevitably happens whenever people (or towns) mature. It maps the inevitable course, from naivety to awareness to corruption; we the audience, like Scott, are left wondering whether we would have been better off not going on this particular journey in the first place.

Day Of Anger is available as a (highly recommended) three-disc Blu-Ray/DVD set from Arrow Films.