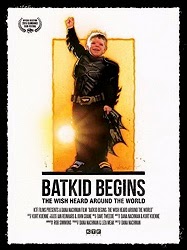 I thought I was going to have to walk out of this one. I was wrong.

During the first few minutes of Dana Nachman's new documentary Batkid Begins: The Wish Heard Around the World, I was sure I wouldn't be able to sit through the whole movie. The "star" of the movie, a six-year old boy named Miles Scott who was diagnosed with leukemia at 18 months old, reminded me too much of my own son. The thought of having to see my boy go through years of sickness and treatment the way Miles did was more than I could handle, and I was ready to flee the theater not because the movie dwells upon or exploits Miles' illness but because I was overcome with empathy for his family. 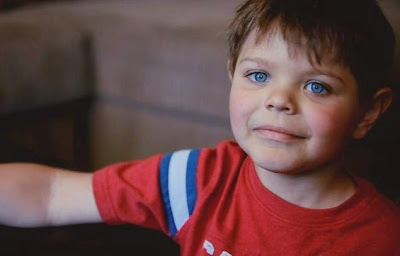 Batkid Begins is not a movie about sickness. Sure, it hangs over the proceedings at times because we can't help but think about it when we see what a sweet, strong boy Miles is or the look of concern on his parents' faces as they worry that his big day will overtax his immune system. But director Nachman wisely gets the backstory of Miles' illness out of the way up front (and does so via comic book panels, which create a distance that makes his parents re-telling of the story bearable) to tell a story that's about a whole bunch of things: the friendship between Miles and Eric "EJ" Johnston, the acrobat and stuntman who played Batman to Miles' Batkid; the coming together of a community in support of a worthy cause; the impact of social media on modern society. Ultimately, though, Batkid Begins is a procedural on just how something this massive and ambitious came together.

You probably know the story by now. When Miles was battling his leukemia, he was granted a Make-a-Wish by the San Francisco Greater Bay Area Chapter of the charity organization. Miles' wish was to be Batman. So a staff of people set out to grant his request, which quickly grew into a phenomenon that shut down the city of San Francisco and saw the participation of some 12,000 people from all around the country. The rest has become the stuff of internet legend. 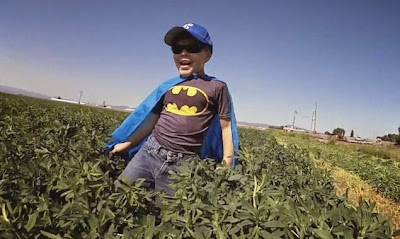 It is the planning of this enormous and now legendary undertaking that makes up the bulk of Batkid Begins. In fact, Miles and his family disappear for most of the movie's middle section as they wait in their hometown of Tulelake, California, for Miles' big day. This chunk of the movie is mostly concerned with logistics, but not in a dry, technical way -- it's more about the people and the decisions behind the logistics. They're people who dream big and work tirelessly to make those dreams a reality. One of my favorite scenes finds Johnston trying to figure out a way to display the communications from the chief of police while in his Batman persona; he could just pull out his phone and play video, he says, but then he becomes just a guy with a phone. Instead he invents a way to project the videos from a device on his wrist. He's always trying to find every little way he can to make the experience better, he says. It's true of all of the behind-the-scenes participants, from Patricia Wilson, the director of the Bay Area chapter of Make-a-Wish who is the real mastermind behind the event, to Teresa Clovicko, one of her employees who is openly concerned and stressed about the undertaking in a way that's very funny. I like that the movie presents these people not as saints, but as well-intentioned professionals who take their jobs seriously and want to do a good thing. It is a cure for our cynicism.

And then we get to the footage of that day, when Miles arrives in San Francisco and plays out a very elaborate fantasy that involves rescuing a damsel in distress, thwarting a robbery from the Riddler, stopping for lunch, chasing down The Penguin and receiving a key to the city on the steps of City Hall. Seeing how seriously he takes it, watching his body language as he fully loses himself in the character of crime fighting Batkid, is one of the most charming things you'll ever see. I cried because I was happy. I cried because he reminded me of my own boy. I cried because this sweet, shy boy's dream was coming true because there are good people in this world and medical treatment that made it possible. At that point I was no longer concerned with the logistics (even though not everything goes according to plan). I was just having my faith in humanity restored by a little kid in a Batman costume. 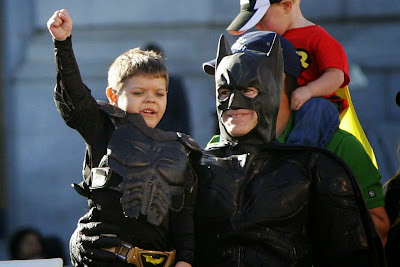 Batkid Begins is sweet and winning and makes us all feel a little better about the world in which we live. It's a documentary that's mostly comfortable to be about what it's about; in the few instances that its interview subjects reach for a larger metaphor, it rings a little false. That's ok. Its value is in the story that it tells, in the way that it captures a very specific moment in our culture of social media and internet memes and, best of all, in the goodwill it engenders in its audience. I didn't stop crying or smiling the whole way through.