George Lucas and Steven Spielberg have always been very clear that the character of Indiana Jones was rooted in the adventure films and serials of their childhood and that they were paying tribute to their matinee heroes by creating a new one of their own. From time to time, I’ll take a look at those silver-screen adventures from the 1930s through the 1950s, both classic and forgotten, as we delve into the stories that influenced Indy. This week, Robert Taylor and Eleanor Parker star in 1954’s Valley of the Kings.

If you’re craving adventure, excitement, dusty battles, and dark dungeons, MGM’s Valley of the Kings is your kind of movie. There’s some pretty strong evidence to suggest that a few guys named Lucas, Spielberg, and Kasdan dug it, too, because it looks like they borrowed big chunks of it for their own Raiders of the Lost Ark.

It’s the dawn of the 20th century, and American archaeologist and all-around tough guy Mark Brandon (Robert Taylor) is on a dig in Egypt where he’s approached by Ann Mercedes (Eleanor Parker), the daughter of Brandon’s old mentor. Ann tells our archaeologist that her dad was on the trail of something big, and was close to finding proof that the Old Testament account of Joseph—from the book of Genesis, see—was historical fact and not a mere story. Unfortunately, her father is now dead, and evidence soon comes to light that there are other people looking for the same thing they are. To find the truth, they have to trek across the desert and try to find the undisturbed tomb of the Egyptian Pharoah Ra-Hotep. The race to the tomb begins, as does the search for evidence that will change written history forever. 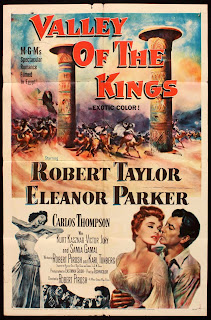 To accomplish their task, Mark Brandon and Ann Mercedes mount up on camels and head deep into the Valley of the Kings, where the resting places of pharaohs have recently been discovered and opened for the first time in thousands of years. Accompanying the party is Ann’s husband Philip Mercedes. Philip is a European of questionable loyalty, and he seems to be on the quest for selfish reasons, rather than noble and historical ones. Along the way, we’re even introduced to an Egyptian named Salah, who moves the plot forward and gets our characters from one place to another.

By the time the story reaches its conclusion, we’ve seen massive monuments—including the Sphinx itself—and walked among the ruins of ancient Egypt. We’ve seen horse chases, camel stampedes, dust storms, sword fights, and death traps as our heroes attempt to escape each scrape on their quest for the ancient artifact.

Sounds kind of familiar, right? Kasdan clearly tapped into several of the themes and plot points when he was writing Raiders: we have a heroic archaeologist reuniting with the daughter of a former mentor (Abner and Marion Ravenwood) for an adventure set in Egypt, a biblical MacGuffin, and a shady European who’s in it for all the wrong reasons (Belloq). The tonal similarities are too numerous to list.

The greatest, most defining asset that Valley of the Kings has going for it is the location shooting in Egypt. When you see the characters ride past the Great Sphinx or the Pyramids at Giza, they’re really there, meaning there’s a HUGE “whoa!” factor because that’s not something we get to see very often. The film knows this, and goes to great lengths to utilize the locations by setting scenes right in the middle of all that history. There’s a pretty notable fist fight that occurs on top of one of the actual 65-foot tall statues of Ramesses II that guard Abu Simbel, a three-thousand-year-old temple in Nubia. Can you imagine that happening these days? They not only filmed AMONG the structures, but literally ON TOP of them, too. Shortly after the film was made, Abu Simbel was moved from the spot it had stood on for three millennia to make way for the construction of a dam; this movie is one of the last places you can see something as it existed for 3,000 years before it was irrevocably altered. 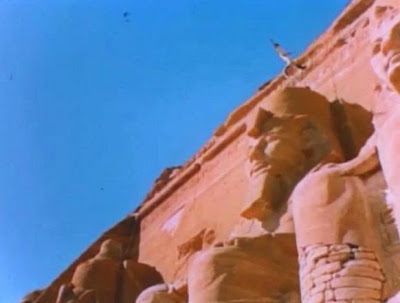 The film was made during a really tumultuous time in Egypt, just two years after a revolution that changed the political landscape in the country. Another two years later, Egypt had a new president and things were kind of tense with the western world, and it would be a while before filmmakers from the West were allowed to shoot in Egypt. Valley of the Kings was in just the right place at just the right time. A few years earlier and it wouldn’t have been shot in color or had that “fabulous fifties” tone; a few years later and it would have been forced to film in generic deserts and soundstages, and would have sacrificed the postcard imagery.

Watching Valley of the Kings today can prove to be something of a challenge, and not for any reasons associated with the plot or with the film being dated; I actually think it holds up really well. No, watching it can be hard because it’s become really, really rare, and that totally sucks. It was never released on DVD in the US; there’s a VHS of the film floating around, but seems to be in scarce supply and commands ridonkulous prices. HOWEVER, the film is thankfully in rotation on TCM, which is where I managed to catch it. You would think a movie like this would be a prime candidate for one of TCM’s collector’s series or some “from the vault” box set, but Warner Brothers is holding on to this classic just like so many other great movies from their catalog. I never know if these old movies don’t sell well because they rarely get distribution or if they don’t get distribution because they don’t sell well. 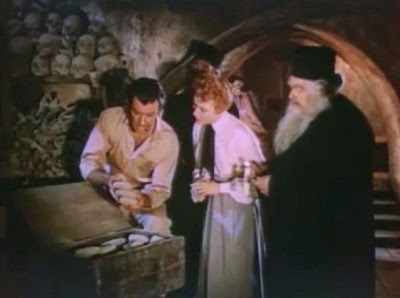 I should mention the director, Robert Pirosh, who I wasn’t familiar with before watching this film. Valley of the Kings was the second film he directed, but he’d been in Hollywood as a writer since the 1930s, contributing to the screenplays for the Marx Brothers films A Night at the Opera and A Day at the Races. IMDB even says he was an uncredited contributing writer on The Wizard of Oz. Unfortunately, he’d given up directing by 1957 after only five movies; Ben Mankiewicz, one of the hosts of TCM’s programming, explains that movie executives proved to be too much of a challenge for him to deal with. He did go on to have a prosperous career writing for television shows for the next two decades, but when you consider his experience in contrast to his short directorial career, it’s hard not to wonder what could have been. At least we have Valley of the Kings, which appears to have influenced some of Hollywood’s best.

Email ThisBlogThis!Share to TwitterShare to FacebookShare to Pinterest
Labels: heath holland on, indiana jones, influencing indiana, valley of the kings