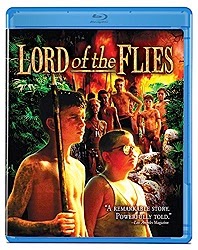 In 1990, a filmmaker with whom most people were not familiar (Harry Hook) took a cast of unknown young actors and remade the classic Lord of the Flies for an audience of seemingly no one. Though it appears to be directed at younger viewers, they couldn't see the R-rated film. Older audiences raised on the book or previous film adaptation would likely find little to like in this glossier, dumbed-down version. Like so many remakes, it feels like an update with the interesting subtext removed -- a copy of a copy. And yet it's also a little better than its reputation suggests, with two effective performances and some nice photography (itself a problem; more on that in a second). If nothing else, at least its heart is in the right place.

Based on William Golding's 1954 novel and previously adapted as a critically acclaimed, stark black and white film in 1963, the 1990 Lord of the Flies opens immediately after a plane carrying a group of military school cadets has crashed into the ocean off the shore of a totally remote island in the Pacific. One of the pilot's is injured and is of no use, leaving the boys to fend for themselves as they attempt to survive in the wild. Eventually, two factions split off: the first is led by sensible Ralph (Balthazar Getty), who wants to organize the boys and get them rescued. The second is led by Jack (Chris Furrh), who leads a group of boys who want to hunt, hurt one another and act like savages. Naturally things end well for everyone. 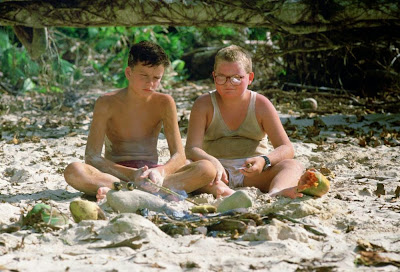 When Lord of the Flies was originally released in 1990, I remember a lot of critics making a big deal out of the fact that the kids have a brief -- brief -- conversation about Alf. This was all the evidence many of them needed that the attempts to "modernize" the movie  -- and, by extension, the movie itself -- were terrible. There are much more significant changes to the source material made here, including changing the kids from British boarding school students to American military school cadets  and the addition of the plane's pilot, who remains injured and less than lucid on the beach for a majority of the running time before escaping to the caves. And, yet, for some reason Alf was the thing that bothered critics. Pick your battles, people.

Truth be told, I like the Alf bit (not the fact that the show they're talking about is Alf, because it forces me to remember that for a brief time America made a show about a shitty wisecracking alien puppet a huge hit) because it's one of the things in the movie that actually rings true. Kids this age would be talking about what they're missing on TV. It's how they connect back to the life they remember. It's how they connect to each other. It's one of the rare moments that the movie feels like its own thing for the better, as well as being one of the only observations made about humanity by the 1990 version that doesn't feel like it came from the book. Much of this adaptation rings false; that scene does not. 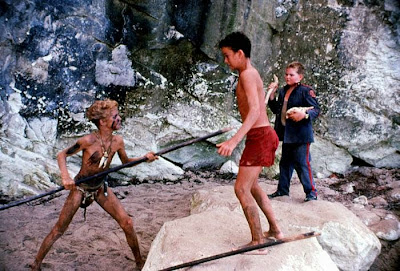 There are two major factors that hold Lord of the Flies back from being a totally successful telling of Golding's novel. The first is that director Harry Hook doesn't really have a take on the material; he approaches it in a very straightforward way, neither comfortable enough to let the text simply speak for itself nor daring enough to take chances with his interpretation. The second and perhaps more damaging shortcoming is the acting, which isn't all that good even by child actor standards. Balthazar Getty, in his first major role, is as good as can be expected -- it's easy to see why he was the one breakout of the cast and went on to have a career -- but almost everyone else is lacking. Chris Furrh's Jack isn't nearly as strong as Ralph, and that's a problem. He's supposed to be the charismatic counterpart to Getty, able to guide others towards savagery and even murder. When Furrh (who did all of his acting in 1990 and has been in nothing since) is on screen, the movie feels like a high school play.

He's not alone, as much of the acting in this Lord of the Flies is amateurish. It's obvious that Hook used a lot of inexperienced actors either because he thought it would be more authentic or because it's all the production could afford, but most of the kids aren't capable of doing the dramatic heavy lifting the required by the screenplay. A few of them aren't even to convincingly play kids. The non-Getty exception is Danuel Pipoly as Piggy, the chubby, bespectacled boy who is the subject of everyone's ridicule and who eventually becomes the island's first sacrifice. For the film's first half, Peppily reads as inexperienced as everyone else, but it works for his character. When he finally breaks down in front of Ralph after the boys have broken his glasses, it is utterly devastating. There is no acting in the scene; just a real, scared and sad boy whose lifetime of torment has rushed to the surface in a single outpouring. It's the best scene in the film, and the one that alone gives weight to the plight of these boys. It's too bad his last scene is so badly mishandled. 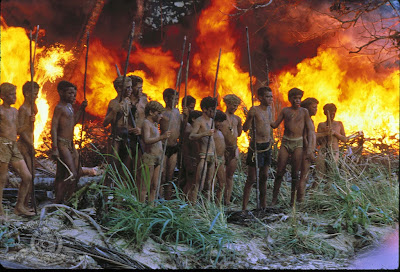 The jungle photography is quite beautiful, particularly on Blu-ray, which might not always be to the movie's benefit. There is a disconnect between the film's themes and its depiction of paradise, which could work for the movie if it seemed intentional. It does not. That's the remake in a nutshell: it occasionally stumbles on to something that might be interesting but never knows what to do with it.

1990's Lord of the Flies is totally watchable and even serviceable at times, with a handful of good scenes and some lovely scenery that's striking in 1080p. Unfortunately, it never shakes the feeling that it's a YA version of Golding's novel that, aside from some language and violence, might as well be made for TV. If this is "your" version of Lord of the Flies because it's the one you grew up with, you'll likely be very happy with Olive Film's Blu-ray. Everyone else will probably stick to Criterion's release of the original '63 film.