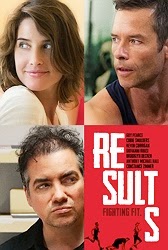 This movie defies all expectations.

On its face, indie stalwart Andrew Bujalski's latest movie looks like any other romantic comedy coming out of Hollywood these days: it's got a sitcom star (Cobie Smulders) in the lead, clean,  bright photography and a supporting cast that includes a lovable schlub and a supermodel. It seems like we know exactly what to expect.

But if we've seen Bujalski's past films (and I have seen only Funny Ha Ha and Computer Chess), we know that his films are the anti-Hollywood. He makes unassuming, low-fi comedies associated with the "mumblecore" movement, which he is often credited with starting (alongside filmmakers like Joe Swanberg and the Duplass brothers). His last film was an improvised comedy set at an early '80s computer chess competition starring a lot of unprofessional actors and shot on black and white analog  video. The word "commercial" doesn't belong in the same sentence as Bujalski's name. Knowing this, we would think we should know exactly what to expect from his latest movie.

And yet here's Results, a movie that feels neither exactly like a Bujalski movie nor a conventional romantic comedy, but rather a bastard hybrid that's incredibly winning and funny in an off-kilter way. That much I could have expected. 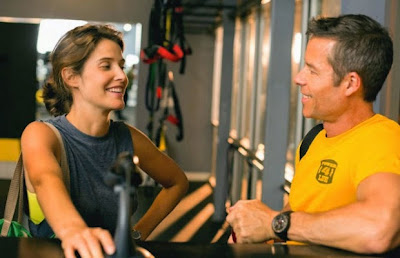 Results centers around an Austin, Texas gym and the relationships between its owner Trevor (Guy Pearce), his star trainer Kat (Cobie Smulders) and a new client, the recently divorced Danny (Kevin Corrigan) who is hopelessly out of shape but newly wealthy and looking to make some changes. There's not much more of the story worth describing, because this isn't a movie about story -- it's about people. Trevor and Kat used to be close. Kat and Danny grow close for a time, and then Danny and Trevor grow close for a time. Trevor wants to expand his gym. Danny isn't sure what he wants.

The entire time I was watching it, I was unable to pin Results down. It has all the signifiers of something conventional but none of the signs; there are no villains, only flawed people who truly mean well. There are no big plot contrivances or crises. The movie takes turns we don't expect and detours down paths no other movie would even consider. Characters disappear from the film for a while and reappear, having continued to live lives we are not privy to offscreen. It all wreaked havoc on my internal movie clock. Most films follow such specific beats that we know exactly what still has to happen and when. Not Results. At about the midway point, I no longer knew if the film was wrapping up or if there was another hour left.

This is all designed as a compliment. When you see as many movies as we do, you can grow numb to just how familiar you are with all of the conventions; it's not until something like Results comes along and splashes cold water on your face that you realize how complacent you've become in seeing the same movie over and over again. This is not to say that the film is revolutionary -- at least, not in big ways. In small ways it is. It still adopts a specific formula, but goes about getting there in a way we're not accustomed to seeing. 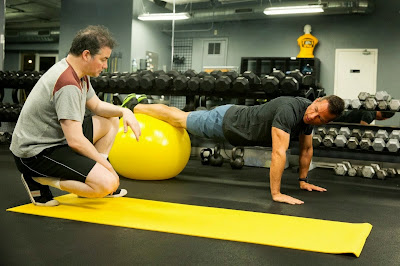 The three actors at the center of the film are all wonderful, clearly enjoying the opportunity to flex some new muscles than those commonly allowed them by other projects. Smulders, so different here than in Kris Swanberg's Unexpected (which screened immediately after this one at the Chicago Critics Film Festival this year), creates a tightly-wound super Type A woman that still manages to be sympathetic despite how intense she is -- one really great detail in the movie is that all of her clients really love her even though we never get to see quite why. Again, it speaks to the idea that these people exist beyond the 100 minutes we spend watching them. Guy Pearce plays what might be the most normal character of his career and comes off extremely likable. There are so many ways Trevor could have been a stereotype we've seen in so many other films -- the guy who is all empty self-help platitudes, the guy who only cares about making his business succeed, etc. -- his but all of them are avoided. Trevor really means all this stuff, and we are disarmed because our cynicism has made us accustomed to not trusting anyone in movies who is this sincere and optimistic. We keep waiting for the heel turn.

But the truly inspired casting of Results is in giving character actor Kevin Corrigan his biggest and best role in years. He's had big parts in the past, but in recent years seems to be doing a lot of smaller appearances (aside from the years he spent on the FOX sitcom Grounded for Life). He's really, really funny in Results; not only is the Danny character a comic creation I really haven't seen in movies before, but Corrigan approaches it at the same off-kilter angle from which he approaches so many of his performances. His timing is unique, his reaction shots priceless. He, like the other characters in the film, could have been written as just a stooge or a loser, but he is neither. Bujalski's comedy takes stock characters we've seen in movies a dozen times and then lets them be actual people.

Results snuck up on me. I enjoyed it enough while it was unfolding, but it wasn't until some time had passed that I realized just how much the movie did its own thing while looking a lot like a movie that does what every other movie has done. I'm not happy with how much the ad campaign looks like the poster for Joseph Gordon Levitt's Don Jon, further proof of just how much Results is being marketed as a typical romantic comedy. Try not to be fooled by the advertising and give the movie a chance. It's just enough of a change of pace to stick with you when so much other product evaporates as the credits roll.