Is any actor more loved than Bruce Campbell? Sure, guys like Channing Tatum, Chris Hemsworth, I’ll even throw in the Toms—Hanks and Cruise—all have huge mainstream appeal and make movies that earn a ton at the box office. Sometimes they land on the covers of magazines and late night talk shows. They’re well-known and well-loved. But are they loved like Bruce Campbell is loved? Then again, is it even possible for any actor to be loved as much as Bruce Campbell is loved? I don’t think that it is. I’d be really hard-pressed to think of any actor who has such a dedicated, devoted fan base.

Junesploitation seems like the perfect time of year to give Bruce Campbell a big round of applause. Not all of his movies are exploitation. Truth be told, I’m not sure I could name the ones that are and the ones that aren’t...the more we do these month-long tributes to exploitation, the more I’m starting to think it’s like porn: it’s hard to define, but you just know it when you see it. I do know that Bruce Campbell is a big enough deal that he IS the thing that a lot of his movies exploit. When it comes to the low-budget horror or action, the concept-heavy thriller, or the gimmicky camp classic, Bruce Campbell is an icon. He’s not just a major player in a particular genre; he IS the genre. 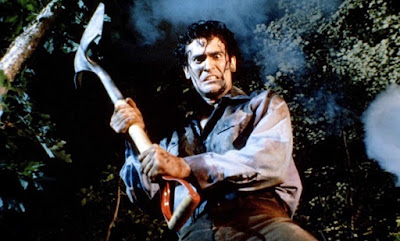 When he first made his reveal to the world at large in his pal Sam Raimi’s low-budget horror classic The Evil Dead, a star was born. In a perfect world, one with justice where people who were only awesome and movie studios did things that made perfect sense, Bruce Campbell would have gone on to be the next A-level movie star. After all, he had it all: the looks, the chin (my lord, the chin), the acting chops, the sense of timing, and the talent to tackle anything that the movie industry could have thrown his way. There’s NO reason why he couldn’t have been a huge movie star, or more realistically, why he couldn’t have been a leading man in the vein of Michael Douglas, Jeff Bridges, or Kevin Bacon.

He has the acting chops. I refer you to exhibit A, a little-seen thriller from 1997 called Running Time. The low-budget film ($130,000) tells the story of a heist in real time, from start to finish in 70 minutes. It’s also in black and white, so it’s all artistic and stuff. Bruce turns in a performance that is nuanced and that shows his range. There are no one-liners or pulled faces; Running Time is a quick, taut little thriller that places almost all the burden on Campbell’s capable shoulders, and he’s more than up to the challenge. The movie exists now as a curiosity of real-time storytelling before Kiefer Sutherland’s show 24 found big success with the gimmick. Bruce Campbell is great in it, and he proves that he can do serious drama just as easily as horror and comedy. When he does pop up in a mainstream movie like Congo or Spider-Man, he instantly brightens up the screen. Why doesn’t this guy get $10 million per picture? 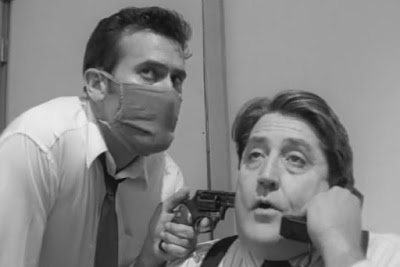 Eh, maybe it’s all for the best. If Campbell had been drafted into the mainstream in the years after The Evil Dead, we might not have genre gems like Army of Darkness or the Maniac Cop movies, and I KNOW we would never have gotten Man with the Screaming Brain or Bubba Ho-Tep. Besides, he’s never seemed particularly interested in most mainstream projects anyway. I know this because he says as much in the two books that he wrote. You know how most celebrity autobiographies show said celebrity as the author in big, bold typeface? Then you look closer and see in small print under the celebrity’s name “with such and such” indicating that the book came out of interviews with the celebrity that the other guy had to sit down and transcribe. Bruce Campbell’s books don’t have a “with such and such” under his name, which leads me to believe that in addition to being a ridiculously good-looking actor, producer, screen-writer, and director, he’s also a capable author. Is there anything he can’t do?! The answer is no.

Campbell has had such a diverse career that he’s become different things to different people. A couple of months ago, I finally bought the DVD set of the television series that, in my opinion, most defines the many awesome layers of the actor, The Adventures of Brisco County Jr. The cowboy series has comedy and drama and action and supernatural elements, and it’s awesome. Anyway, when the clerk at the store rang the DVDs up, he looked down at it and said, “Oh, it’s that guy!” Thinking I’d met a fellow Evil Dead fan, I said, “Yeah, Ash from Army of Darkness!.” He looked at me blankly and said, “Burn Notice. I love this guy on that show. He’s totally awesome.” Here’s a guy who had no knowledge or appreciation of Ash, but he knew he loved Bruce Campbell as the Hawaiian-shirt-wearing Sam Axe on a cable TV show. I guess it makes sense that more people know Campbell from Burn Notice than from a show like The Adventures of Brisco County Jr. or Jack of all Trades, but I think that’s a shame. I’d like to think those people are future Evil Dead fans waiting to be born. 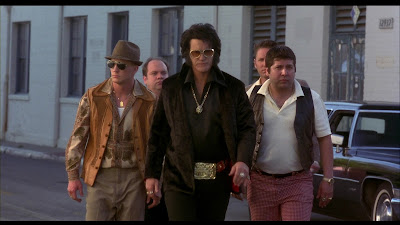 Campbell is so popular among a certain sect of pop culture aficionados that he was able to parody his own persona in 2007’s My Name is Bruce, a film that he both starred in and directed. Campbell plays a fictionalized version of himself, an actor who is so identified with his roles as monster slayers that he is called upon to actually fight the forces of evil when they invade a quiet Oregon town. My Name is Bruce makes me think that it’s hard to be Bruce Campbell. Everywhere you go, people are asking for spoilers of your upcoming Starz television series, when you’re going to make Army of Darkness 2, and yelling out things like “give me some sugar, baby.”

Maybe that’s par for the course when you’re an idol to millions and something of a nonconformist. Bruce got to where he is largely by playing outside the system and pursuing the projects that meant something to him. You’ll have to look pretty hard to find a Bruce Campbell role where he plays the aging father of an angsty teenager on a CW show, always sipping from a coffee mug and doling out nuggets of parental wisdom. A lot of genre actors have to take roles like that when they hit their fifties, but not Bruce, thank you. No, when you watch Bruce Campbell in something, you know what you’re going to get: something awesome.
Posted by Patrick Bromley at 12:00 PM