I'll Watch Anything!: Kiss Meets the Phantom of the Park 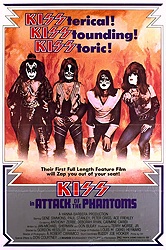 YOU WANTED THE BEST, YOU GOT...this.

There's a long tradition of bands cashing in on their popularity by making a movie. The apex of this phenomenon is still one of the earliest efforts: 1964's A Hard Day's Night. But there are other wonderful entries in this limited subgenre, including The Ramones' Rock 'n' Roll High School or The Monkees in Head. Hell, I think there's a lot to like in Spice World. I'm not a monster.

But for every Hard Day's Night, there's a Can't Stop the Music or From Justin to Kelly. The 1978 KISS movie KISS Meets the Phantom of the Park falls into that camp.

I've always wanted to see KISS Meets the Phantom of the Park, if for no other reason than because a KISS TV movie produced by Hanna-Barbera about what I assumed was a haunted amusement park sounded very intriguing, especially because it was very difficult for me to see for many, many years. Then a while back I got a package in the mail, and in it was a copy of the film courtesy of my man Hollywood Heath Holland (with whom I have discussed KISS at length and expressed my desire to see the movie). It took me a long time to get around to watching it -- I've started and stopped it more than once -- but Rock and Roll! day for Junesploitation was all the excuse I needed.

I'm a huge fan of KISS. I know that the music aficionados among you have probably discredited me already, as the band is seen as something of a laughing stock. They were dismissed early on as a lot of makeup and gimmickry and haven't done much to help matters since, what with their shameless promotion and their rotating lineup and every single time Gene Simmons opens his mouth. But their first six albums, from 1974's KISS through Love Gun in 1977, are great rock records -- a celebration of big riffs, moronic lyrics and endless swagger. In the words of director David Wain (whose one-time fandom of the band inspired an entire subplot in his film Role Models), "They weren't fucking around." I don't have a lot of patience for anything beyond their disco album Dynasty (though I'm a big fan of Gene Simmons' solo album and Music from "The Elder," which might be the single nerdiest thing ever created), but I'd probably put any of their early records on just as soon or faster than anything else.

At the height of their popularity in 1978, KISS cashed in on their celebrity by appearing in the NBC Movie of the Week KISS Meets the Phantom of the Park. The band apparently hates the film and is embarrassed of their involvement in it, which is surprising because they've put their name on everything from caskets to Sonic Boom.

The movie tells the story of Abner Devereaux (Anthony Zerbe, the guy who gets depressurized and blown up in Licence to Kill), the brilliant inventor and chief engineer of Magic Mountain theme park who creates all of the animatronic robots. When he's fired by the park's owner so that his salary can pay for an upcoming KISS concert, Devereaux hatches a plan to take revenge his former boss, the park, the guests and, most of all, KISS. While this is going on, a girl named Melissa (Deborah Ryan) searches for her boyfriend Sam (Terry Lester), who works for Devereaux and has been turned into a mindless robot. KISS helps her find them, because KISS is nothing if not helpful. 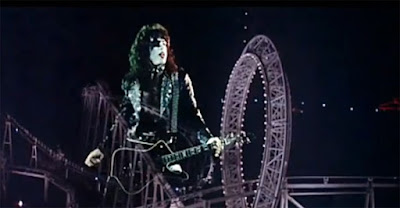 KISS Meets the Phantom of the Park is a very bad movie. A very bad movie. I found myself enjoying large chunks of it solely as a time capsule from an era (era) when people with suits and money thought it would be a good idea to put KISS in a movie this goofy. I also enjoyed it because it's a movie starring my favorite rock group KISS. I've got Ace Frehley, I've got Peter Criss.

It's impossible to catalogue all of the wrongheaded choices made with this film. It is inept and goofy and stupid and very poorly made. It runs less than 90 minutes but feels endless. It is boring and badly paced. The voice of drummer Peter Criss is supposedly overdubbed by another actor. Guitarist Ace Frehley was in the throes of some major substance abuse problems and miserable with the process of shooting a movie. His African-American stunt double is visible at times. It takes more than 30 minutes -- over a third of its run time -- for KISS to actually appear in a movie with KISS in the title, not counting the opening number in which the band members are blown up to enormous size and superimposed over the theme park [seen above] to perform "Rock and Roll All Night." Even this scene is hilariously inept, as after the song is over the camera holds on the band awkwardly shuffling down a set of invisible stairs and out of frame on their enormous platform shoes.

I don't know if it's because the movie is targeted at kids (the only evidence of which is a) that it was produced by Hanna-Barbera and b) it is completely juvenile) or because producer Bill Aucoin -- KISS's manager -- was invested in maintaining a very specific image, but Phantom of the Park is a fascinating watch just for the way it attempts to further the KISS myth by turning them into otherworldly superheroes who fly down from space shooting lasers and fire and, we later discover, are granted powers by four magical talismans (or, as Deborah Ryan calls them, "taleesmans") that represent each of their personas: the Demon (Gene Simmons), the Starchild (Paul Stanley), the Spaceman (Frehley) and the Cat (Criss). Except for two awkwardly staged fight scenes -- one with silver-suited wolf/dog-headed robots and one with the Evil Robot Usses version of the band -- their superpowers are used primarily to do...nothing. At one point, Paul Stanley shoots lasers and reads the mind of Melissa just so he can tell her that her boyfriend is still in the park. It's hilarious because Paul Stanley is a very bad actor.

Three of the band members are bad actors, actually. Gene Simmons comes off ok; though his voice is modulated to a super low pitch, he has presence and is the only one to really embrace the theatricality of his outsized persona. It's easy to see why he was able to make the transition to acting in non-KISS movies in the '80s (including Runaway and Wanted: Dead or Alive). I don't know exactly what the story is with Frehley and Criss, both of whom reportedly had aspects of their performances altered in post-production. I do know that the movie seems to cut to each band member only long enough for them to deliver one line at a time. It's the way you might shoot a dog or a baby acting -- you get the one good take and call "cut." This is the company in which KISS finds themselves, acting-wise.

Though the movie was made while the band was at its peak (following the release of Alive II), there was already unrest in their ranks. The same year that Phantom of the Park debuted on TV, they released four solo albums, one from each member of the band. It was an indulgent and ultimately unsuccessful experiment; though the albums sold well, they are not remembered as being particularly good. It's odd, then, that the majority of the music in this movie (at least in the version I watched) comes from those albums: "Mr. Make Believe" and "Radioactive" and "Man of 1,000 Faces" from Gene Simmons; "Easy Thing," "That's the Kind of Sugar Papa Likes" and "Hooked on Rock 'n Roll" from Peter Criss; "Love in Chains" and "Hold Me, Touch Me" from Paul Stanley; "Fractured Mirror" and (my personal favorite) "New York Groove" from Ace Frehley, the last of which is used to score the fight scene between KISS and the wolf/dog robots. I like a lot of the songs, but barely even consider them KISS songs. Was the movie created just as a tool to get their solo music out to the public? It's difficult to watch Phantom of the Park and think anything else, especially when there are long scenes that just hold on characters standing around while a song plays.

Live performances are sprinkled throughout the film, though at no point does director Gordon Hessler make any attempt to capture what made the band's live act special -- he films the flashing KISS sign and Gene Simmons sticks out his tongue at one point, but that's all. It doesn't help matters that there's no consistency to the selections on the soundtrack. For most of the performances, the band is just playing to the tracks as they appear on the albums. I can recall only one actual "live" recording, and that's their performance of "I Stole Your Love" off of Love Gun. On the plus side, there are two alternate versions of their hits that I haven't heard elsewhere: Criss and Stanley do an acoustic version of the ballad "Beth" (while Gene Simmons and Ace Frehley stand around very awkwardly) and near the end of the movie the evil robot KISS performs "Rip and Destroy," which is just "Hotter Than Hell" with different lyrics. I think that one's supposed to be bad? The audience doesn't seem to be into it at first. But then they are, because this movie is impossible to follow. 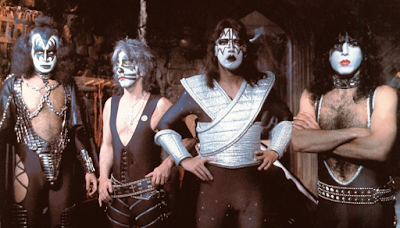 Ratings for the movie were huge despite it being pretty terrible, and one year later it was released overseas as KISS in Attack of the Phantoms. Many different versions of the movie exist, with new/deleted scenes and completely different music. The TV movie supposedly ends with "God of Thunder" over the credits; the version I watched ends with a reprise of Gene Simmons' "Mr. Make Believe" off his solo record. Want to know how I know I'm sick? Because now I want to track down and see the other versions even though I didn't think this one was any good.

KISS would appear in two more features over the course of their more than 40-year career. The first was Adam Rifkin's Detroit Rock City in 1999, but that was mostly about a group of obsessed KISS fans; the band appears briefly at the end in a live performance (though they do provide a commentary on the DVD). Their second feature, Scooby-Doo and KISS! Rock and Roll Mystery, is due out on DVD and Blu-ray later this month. It makes sense that they are working with Hanna-Barbera again, though this time as actual cartoons. Also, I'm assuming the movie will feature the current incarnation of the band, which has Tommy Thayer as the Spaceman and Eric Singer as the Cat. So, you know, not really KISS. It looks awful. I can't wait to own it, mostly as a way of indoctrinating my son into KISS fandom. He currently loves Scooby-Doo but doesn't like when I listen to KISS albums in the car, which he refers to as "rocking boy music." Fucking A right it is.

While the original TV version of the KISS Meets the Phantom of the Park has never legally made its way to DVD, the European cut of the movie is available as part of the Kissology Volume Two set released in 2007. It is also available if you are friends with Heath Holland.