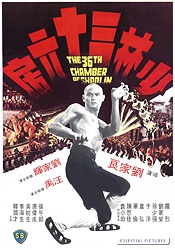 Sometimes, I should just listen to people.

For a long time, I wasn’t really into martial arts movies (I know that sounds weird). I grew up watching all kinds of action, but never really got interested in martial arts because they felt so unpolished. My younger self really wanted something “cool” out of movies, and the terrible dubbing and campy acting were too much to be overcome by the action sequences of the kung-fu movies I sampled. I finally found my way into the genre with Jet Li, but I was reluctant to go back and check out the older titles; I didn’t want to wade back into the pool of these corny, melodramatic stories that didn’t feel cool.

That’s the baggage that I brought to Liu Chia-Liang’s The 36th Chamber of Shaolin (1978). So many people have talked about how this movie is considered one of the greatest, if not the greatest, martial arts movie of all time. Quentin Tarantino clearly loves it. The Wu-Tang Clan, among others, won’t ever shut up about it. But I still had doubts.

I shouldn’t have. Because they’re totally right. 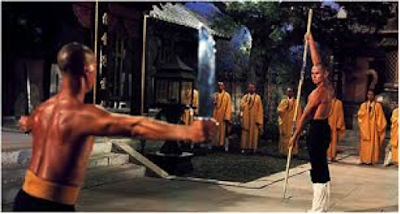 Gordon Liu, in his star-making role, plays San Te, a student who gets caught up in his village’s rebellion against the oppressive government. One particular uprising results in arrests of his family, the deaths of his friends, and the closing of his school. He feels the great injustice of not having a way to go against his oppressors. Injured and on the run from the law, he decides that the only people who can help him are the famed monks of Shaolin, known for their fighting skills, in order to fight back against the oppressive regime and restore order to his village.

These opening scenes could feel rather slow and deliberate, but they work because they establish the stakes and the motivation for San Te (it reminds me of the purpose behind the deliberately paced opening scenes of John Wick). We understand exactly why he cares and what his approach will be to his anticipated training.

Speaking of that training, The 36th Chamber of Shaolin is the mother of all training movies. Other movies might be happy with a montage, but the training here IS the movie. I’ve complained before about the narrative shortcut of having your protagonist return from exile as a perfect hero (I’m looking at you, Braveheart) but this movie gives us the antithesis; it takes us through the little successes and failures of becoming something heroic.

This is my favorite part of the movie. Instead of training to fight a specific Big Bad, or to get vengeance for his master, the story is suggesting that a hero’s primary enemy is his or her own complacency and fear. What can San Te do to overcome this interior enemy? We see the answer as he progresses through the chambers mentioned in the title; each chamber focuses on a specific skill, and one cannot progress until achieving mastery. San Te even has to figure out a way to reach the dining hall to eat his meals; nothing is just given in his martial arts training.
What makes this sequence work is that we get to see San Te try, fail, and work to solve a problem, multiple times. The challenges are different in every chamber, which keeps the sequence fresh and consistently interesting; I like that the level of specificity the story gets to in communicating the completeness of San Te’s training. There are chambers to train specific sections of the body, which is fantastical enough to be in a movie like, but realistic enough to be believable. Gordon Liu is playing a slightly different type of martial arts protagonist; he can’t simply play the single note of intensity, stoicism, or (in Jackie Chan’s case) goofiness that other roles require. He is strongest here in playing up a youthful exuberance, which opens up his performance to a greater range of emotion and physical comedy without losing the ability to convey the fighting convincingly. 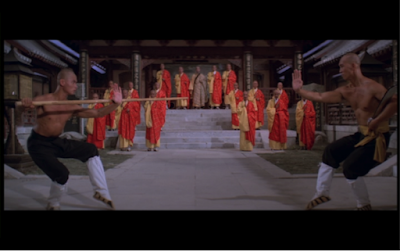 And the fighting is solid, if not spectacular. I admit that it took a little getting used to the pace of the fighting choreography, probably because I’ve been ruined by too many modern action movies that use speed ramping or wire work. The action initially felt a little slow, until I figured out that the fights were in real time, and by the end of the movie, I had totally gotten accustomed to the speed. Liu is quick and smooth in his fighting movements, and is particularly striking in his skill with weapons, particularly one that his character “invents” in the story.

The spirit of the film is ultimately hinted at in the opening credits of the movie, where Liu, in character, is alone, demonstrating forms and skill with various weapons. It feels a little out of place, but makes sense as the goal of what San Te has learned to pursue: personal excellence and perfection. The character’s success was not simply about the defeat of a villain or the gaining of power, but gaining knowledge of self and skill through the dedication of time and effort.

“Kung-fu” has come to be a ubiquitous term for martial arts in Western culture, but in Chinese, the term more accurately refers to any skill that is acquired through hard work, time, and practice. By this standard, there is probably no movie that embodies “kung-fu” more than The 36th Chamber of Shaolin, which is exactly why it’s considered one of the best of its kind.