Off the Shelf: The Wild Angels (Blu-ray) 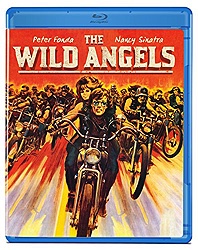 Though the biker movie was an exploitation fixture from the '50s through the '70s, there are very few good ones. Sure, the occasional Easy Rider or The Wild One achieves classic status and validates the genre, but most of them were quick-and-dirty efforts too shapeless and forgettable to avoid blurring into one another. To stand out, they have to be something like Werewolves on Wheels or The Pink Angels -- movies you have to see once to believe them, but are unlikely to revisit. The others tend to fade into the background.

Not The Wild Angels, one of the very first and best biker movies released by American International Pictures, the studio most closely associated with the genre. The movie stars Peter Fonda three years before he became a total counterculture icon in Easy Rider; here he plays Heavenly Blues, the leader of the San Pedro chapter of the Hells Angels. His gang gets in fights, they get chased by the cops. One of their members, The Loser (Bruce Dern), gets shot by police during a chase and is hospitalized. The Angels break him out of the hospital and take him with them, but he dies shortly thereafter. So they stage a funeral for him which quickly spirals out of control, leading to more fights, violence and perhaps a new direction for the gang. The '60s, man. 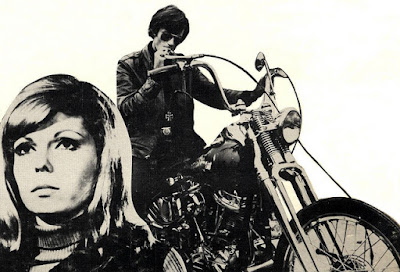 There's not much of a plot in The Wild Angels. It's more of a hangout movie, except that the people we are hanging out with are bikers and criminals. We're far enough removed from the counterculture of the 1960s that we forget just how hard a movie like this pushes back against the establishment; we're more used to movies that talk the talk but back down when it comes time to walk. That means it can be jarring when our "heroes" drug and rape one of their own near the end of the film with no repercussions and no remorse -- they might as well be pushing over a table for all the gravitas the act is afforded by director Roger Corman. The Bruce Dern character sports a swastika on his helmet, and when the Angels give him a funeral there's an enormous swastika flag draped over his coffin. There is no mention made in the script (much of which was reportedly rewritten by Peter Bogdanovich in his early days) of any of the beliefs associated with that symbol of hate and I can't tell if that's better or worse. Is it just something horrible that's been adopted as a way of being shocking and controversial or is the hate meant to be assumed? Either way, it's a much darker touch than we're accustomed to in modern movies, which always have the rough edges sanded off.

The Wild Angels is almost all rough edges. It's not a traditionally "good" movie -- there's no real narrative or character arcs, just the charisma of Fonda, Dern, Nancy Sinatra and Diane Ladd (as their Old Ladies) -- but it's such a product of its time and so much the movie that it stands out in its subgenre. The last third has almost no formal dialogue; it's just an endless funeral scene and then the lengthy fallout in which everything goes crazy. While the final moments are oddly poetic and prescient about what would eventually come of most of the '60s counterculture, the preceding 85 minutes don't offer a ton of commercial appeal in 2015 outside of anyone interested in the biker movie subgenre or those fascinated by the film's anthropological approach to its subject matter. 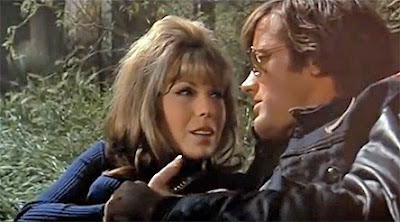 It's for that latter reason that I have such affection for The Wild Angels. I did away with "Bikers!" day for #Junesploitation this year because a) it was a bit of a bust last year compared to other days and b) there just aren't that many good biker movies to offer a lot of options -- at least not that I've seen. Maybe we'll bring it back next year now that The Wild Angels is out on Blu-ray from Olive. It's the purest example of a bikersploitation movie that I've seen, and further evidence of just how far out on the edge Roger Corman and AIP were in the '60s. They were making movies for audiences that weren't being served anywhere else. Isn't that what great exploitation is all about?