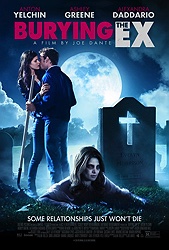 Try as I might, it's sometimes impossible to go into a movie without any baggage.

I love Joe Dante. LOVE Joe Dante. A new film from him is cause for celebration, especially since it's only the third feature he's directed in the 2000s (the other two being Looney Tunes: Back in Action in 2003 and The Hole in 2010). And because I'm such a fan and because any new movie from him feels like a gift, I desperately want to like Burying the Ex, his new zombie romantic comedy -- or zom-rom-com as I think it's being referred to in the marketing materials. I want to love it. I can't quite make it there.

Anton Yelchin plays Max, an obsessive horror fan who works at a horror-themed novelty shop called Bloody Mary's and has dreams of opening his own. He's dating Evelyn (Ashley Greene), an uptight environmentalist who doesn't share any of his same passions. Their relationship is complicated further by the appearance of Alexandra Daddario's Olivia, who runs a super quirky and alternative ice cream shop ("I Scream") that serves Fruit Brute ice cream. Max decides to call things off with Evelyn, but just before he gets a chance she is hit by a truck and dies in the street. Max is heartbroken long enough to start dating Olivia, which goes great until Evelyn climbs out of her grave and wants to resume the relationship as a zombie. 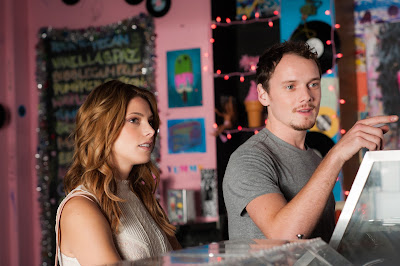 There are a lot of things I enjoyed about Burying the Ex. The three lead actors are all very appealing, and Dante infuses the movie with a lot of his usual references to horror films of the past. Characters are forever watching horror on TV or going to see horror movies or talking about horror movies, and those are just the obvious homages; there are others that are far more subtle, like the name of Greene's character being a reference to the 1971 Emilio Miraglia movie The Night Evelyn Came Out of the Grave (h/t to Tim Lucas for pointing that one out, since it went totally over my head). I like that it's not just a horror movie but a movie about horror fans -- people who collect memorabilia and are heartbroken when someone folds their rare import posters. It's also a movie about horror fans living in L.A., which is rarely represented on screen. Max and Olivia go to the New Beverly and have a date at the Hollywood Forever Cemetery (where Evelyn is buried). Like so many Joe Dante movies, Burying the Ex is a genre movie that's also about the way that genre movies shape and define us. It's lacking the sweetness and polish of Dante's masterpiece Matinee, but shares some of the same DNA in that it's characters use their love of monster movies to relate to one another and the outside world.

Aside from these threads, though, there's little to identify this as a Joe Dante film. There's little of his energy or visual wit. Far be it from me to review a movie's budget, but this was shot fast and cheap and feels like it; it's basically three (maybe four) characters standing around and talking to one another in shops and apartments and the digital photography leaves hardly an room for style. I can't really blame Dante for any of this. Such is the state of the industry right now. Even the guy who made Gremlins can't get the budget it would take to make even a small movie like this at the proper scale. Corners must be cut, meaning we end up having the grade the film on a curve -- the slack of "they did the best they could." Our hearts tell us that Joe Dante's best days are behind him, but our heads have to intervene and remind us that the game has changed, not him. At least, I don't think. 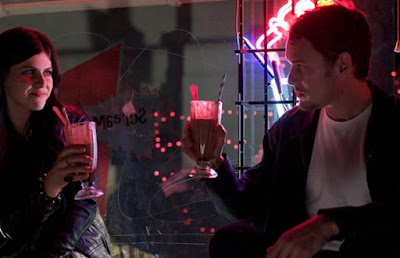 More than anything, Burying the Ex has an Evelyn problem. It's not the fault of Ashley Greene, who hasn't ever given a performance that really knocked me back but here does her absolute best with what is a nearly unplayable role. But the script by Alan Trezza (who originally directed this as a short film) can't decide who the character is supposed to be. In its best moments, the movie treats the relationship between Max and Evelyn sympathetically -- they're not enemies, they're just not right for one another and only one of them knows it. That's the more interesting movie. The broader, more obvious stuff -- where Burying the Ex's heart lies far too often -- turns Evelyn into cartoon harpy who is strangling Max and is better off hit by a truck than living with him. The actual film never bears that out, though. Yes, Evelyn has her moments of being controlling and she repaints the apartment without asking and has strong beliefs about the environment, but these are not flaws punishable by death. At her worst, she's extremely rude to Daddario upon first meeting her, but immediately feels bad and apologizes to Max after the fact. She's talk about a lot in the film as though she's a monster even before she actually becomes one, but it's totally forced as a way of making the central gag work -- the Girlfriend from Hell becomes the Girlfriend from Beyond the Grave.

The screenplay has other major problems, like having Max keep Evelyn's return a secret for no other reason than so that he has to lie and deceive his new girlfriend for little to no comic gain. It's one of those setups that requires characters to behave like people in movies and not actual human beings. But it's when they do treat each other like real people that the movie works best, making me long for a more sensitive horror comedy in which characters are allowed to face the reality of their situation -- the movie this shows the potential for being at times. Unfortunately, it's at war with the half that's a dumb, incredibly sexist comedy that has to reduce it's characters to types. It's horror nerd wish fulfillment, in which we (as the horror nerd) get to date Ashley Greene who loves having sex but folds our posters so we leave her for Alexandra Daddario who, it should be said, is the horror fan's perfect girl and not just because she's played by Alexandra Daddario (which does not hurt). She loves the Ramones, she quotes Night of the Living Dead, she goes to see horror movies by herself, she owns her own successful business (which never seems to have any customers) and makes ice cream out of Monster cereal. Though Daddario plays her winningly, she's not a person. She's a construct. She's the Monster Pixie Dream Girl. 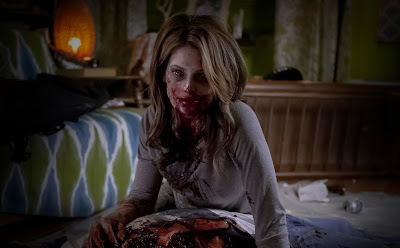 There's an attempt in Burying the Ex to be raunchy and non-PC that feels jarring (most of it courtesy of Max's half brother, the standard schlubby funny friend played by Oliver Cooper), I suspect because we tend to romanticize Dante's career as being entirely comprised of his Amblin period. And while he did work in the more family-friendly Amblin wheelhouse for the majority of the '80s and '90s -- everything from Gremlins to 1998's Small Soldiers -- we can sometimes forget that Dante started out as a Roger Corman protégé making stuff like Hollywood Boulevard and Piranha. He comes by this kind of thing honestly. However, the ways that Burying the Ex tries to be edgy don't feel like Joe Dante. It's too tone deaf and dirty for him, lacking the director's essential sweetness. Some of the dark comedy feels like it comes from his voice -- the increasing number of flies swarming around Evelyn are a particularly nice touch -- but they're competing with cheap gross out gags and forced raunchy dialogue. The film never feels like it really has a handle on itself.

So do I like the movie more or less because of Joe Dante? Had Burying the Ex been directed some  generic for-hire or first-time filmmaker, I would be much more willing to dismiss and forget it. But it would also be missing all the Joe Dante touches that endear me to it at all -- the references, the love of genre that bleeds through even the rough spots, the cameos from the likes of Dick Miller (of course) and Archie Hahn (sadly no Belinda Balaski this time out). And, yet, because it is Joe Dante I feel like my disappointment is amplified. I take it much more personally when the movie falls short, either a sign that Dante has somehow "lost it" or that he is being let down by a system he helped make hundreds of millions of dollars over the years. I tried not to carry any baggage into the film, but to deny my history and feelings for the work of Joe Dante would be to watch movies the wrong way. We cannot view movies objectively; we can only watch them as ourselves. It's what makes our relationship to them so special -- we bring with us the sum total of all our life experiences into every film, and the way the art interacts with our tastes, our memories and our histories defines how we respond.

Try as I might to separate my feelings about the filmmaker from the film he made, I can't. Whether it makes me biased in favor of the film or unusually critical of it, my love of Joe Dante colors my view of even a lesser effort like Burying the Ex. And why shouldn't it? We don't experience art in a vacuum, and for some reason the idea of having preferences has become a dirty word in the way we talk about movies -- especially critics, who are expected to be empty vessels just waiting to be filled by every new film they experience. It doesn't work that way. We're fans, same as everyone else. The best we can do is let the reader know who we are and where we are coming from when discussing a movie. I wanted to like Burying the Ex more than I did because I'm such a fan of the director behind it. And while it might be my least favorite thing he's ever done, I won't ever give up on Joe Dante. Even his weakest movie has enough of him in it that I still find a lot to like. Maybe that's just wishful thinking talking. What can I say? I'm a fan.