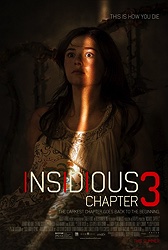 The Insidious series goes back to the beginning for its third outing.

I am a fan of the Insidious series. The more horror movies I see, the more the the first two stand out in my head for being completely their own thing. They are movies willing to take chances and go 100% fully batshit nuts, and the fact that they are written by Leigh Whannell and directed by James Wan means they are expertly made on a technical level while still threatening to go completely off the rails in the best way. While Wan's The Conjuring is a very classical and well-made haunted house movie and probably going to become an all-timer, it's the Insidious movies I keep coming back to again and again. As studio horror goes, they're the best game in town.

Now here's Insidious Chapter 3, a prequel to the first two movies and the first in the series to be written and directed by Whannell -- his first time behind the camera. While he is fortunate to be inheriting a franchise that's already well established (and which he had a major role in establishing), he faces the challenge of having to distinguish himself his first time out as filmmaker inside the framework of the second sequel in a franchise. The only other movie I can think of made under similar circumstances -- the writer of the first two movies is called up to write and direct the third -- is David S. Goyer directing Blade Trinity. That didn't end well for anyone.

Well, Insidious Chapter 3 is a better movie than Blade Trinity. Much better. Feel free to put that on the posters. 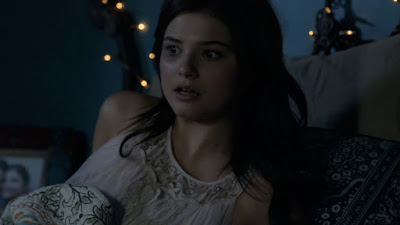 Taking place years before the Lambert family haunting seen in Insidious and its follow up, Chapter 3 follows Quinn Brenner (Stefanie Scott), a teenager finishing up high school and hoping to go away to acting school, where she'll maybe exert her independence from her father (Dermot Mulroney). He's been depending on her too much since the death of her mother, and the pressure is causing cracks in their relationship. Quinn begins to see figures that she believes are the ghost of her mother trying to contact her, but when they start to get aggressive and try to hurt her, she realizes they might be some more...wait for it...insidious.

A psychic is called in to help: Elise Rainier (Lin Shaye), who SPOILER died in the first film but has since managed to return for two sequels. Though she swore off communicating with the spirit world, Elise decides to stop in and help Quinn discover the true identity of the spirit she has been seeing before it either kills her or takes over her body for good.

For as much as this is an Insidious movie -- it has several of the regular characters, the supernatural goofiness and jump scares that we've come to expect -- it's clear that first-time director Whannell is interested in making something that feels like its own thing while still being part of the universe he created. Chapter 3 feels smaller and more grounded than the first two movies, which spent more time in the Further and even doubled back on themselves chronologically, experimenting with narrative storytelling in a way similar to Back to the Future II. There's nothing so audacious about Insidious Chapter 3, which is more about exploring a character previously established but now with more depth. Unlike the first two movies, this isn't the story of the family being haunted. Chapter 3 is Elise's story. 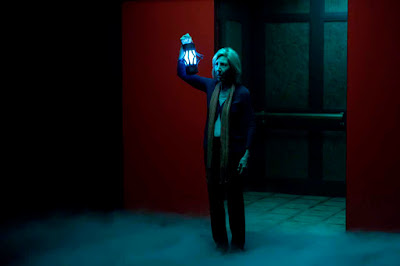 Yes, the movie works best as a showcase for Lin Shaye, a beloved character actor for years and a friend of the horror genre finally getting what might be her biggest and best role to date. Her turn as Elise is equal parts beautiful and sad, as hers is a character haunted not just by grief (her husband has died, and in the movie's most moving image we see her sleeping with an item of his clothing) but by the voices of the spirits with whom she can communicate. The ghosts in Insidious Chapter 3 aren't just scary and mad -- there is sadness, too, and I like that Whannell has chosen to approach his sequel from a new perspective. This is the most emotional of the Insidious movies, as loss hangs over every frame. Quinn and her family are dealing with the loss of her mom; Elise is grappling with the loss of her husband. It's part of what makes them more vulnerable to attack by angry spirits, and I like that Whannell seems to be saying something about the resilience of the human spirit and the need to fight through the pain as a way of coping with death.

This is also the film that for a time turns Lin Shaye into an action star, an achievement that should not go unnoticed.

The other performances are a bit more uneven. It's fun to see Whannell and Angus Sampson show up as Specs and Tucker again, appearing here as a kind of origin story for how they came to be involved with Elise. Scott does what is asked of her, which is to be a teenager and then to be in peril. Dermot Mulroney, as her father, has a more difficult time landing the emotional beats. We don't know much about him other than that he feels overwhelmed and then concerned, but he's oddly stiff under both circumstances (and has one outburst late in the movie that's borderline embarrassing). Because Whannell has chosen to emphasize emotion over technique with this installment, the actors really need to connect for the approach to work. Most of the time it does, but that only makes the times it doesn't stand out even more. 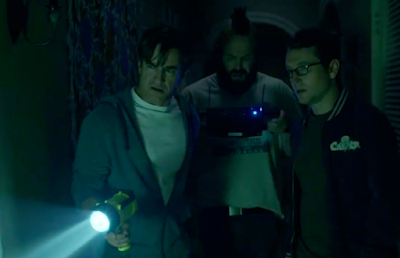 Is the movie scary? Enough. One of the things I've liked about the Insidious series is that they really try to bring fun back to horror -- their pleasures are more of the funhouse variety, in which things jump out and say BOO or make loud noises and you scream and then you laugh. Between the fact that this sequel leans more to the dramatic and the fact that it's smaller in scope -- it disappointingly never goes as crazy as the first two and there's little to no time spent in the Further -- those moments are limited. When they come, they're spectacular -- Whannell stages one sequence with a window that's one of the best scares I've seen in a while -- but those looking for another non-stop haunted house ride might feel let down. This is the Insidious that wants to scare us more with ideas, whether it's the idea of facing our own mortality or the idea that someone we love is being taken away from us while we sit by helplessly and watch. It's effective in its own way, but not the visceral experience of the previous films.

Whannell and cinematographer Brian Pearson (his first time with the franchise, taking over for John R. Leonetti) have made a beautiful looking film. While less stylized than previous outings in the regular dialogue scenes, there's a ton of atmosphere and clever uses of shadow and light in the horror set pieces. Just look at the photo of Lin Shaye above; one can see the clear influence of Italian filmmakers like Bava, Argento and Fulci. A line can be drawn between this movie and its franchise predecessors, but Whannell has made a movie that looks just different enough so as to be its own thing. 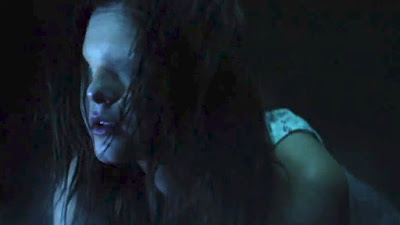 It's true across the board: Whannell succeeds at the unenviable task of making a movie that feels like his own while still fitting into the larger framework of the Insidious series. Will the series continue beyond this one? Hard to say. If it does, I suspect it will be without Whannell as writer or director. It's clear that his heart is with the Elise character, and since he can't make a proper sequel to Insidious in which she plays a major role (being dead and all), he would have to continue making prequels -- the Young Elise Chronicles. He's made that movie already. My guess is that he now moves on.

Between the Saw series and now the Insidious series, Leigh Whannell is responsible for the two biggest horror franchises of the 2000s. They're totally different in their tones and the way they approach their respective horrors, but share in common a desire to create a specific world that has its own set of rules. That's not easy to do once, much less twice -- and so successfully on top of it. With Insidious Chapter 3, Whannell proves that he's more than capable as a director, and I suspect he's got a real career as a filmmaker in front of him. I'm excited to see what he does outside of a sequel.
Posted by Patrick Bromley at 5:00 AM