Most 80’s kids owned a “My Buddy” doll when they were growing up. I had a “My Asperschlager.”

In this week’s Riske Business, Erich and I discuss some of our favorite buddy movies and what goes into making a good buddy movie.

Erich: Maybe this isn’t true anymore, but there was a time when plenty of folks considered Monsters, Inc. to be one of Pixar’s worst movies. Not only do I think the film is underrated, depending on the day I might even say it’s my favorite Pixar flick. The relationship between Sully and Boo always makes me cry, but the heart of the film is the friendship between odd couple Sully and Mike. Unlike the film’s also-underrated prequel, the monster pals have each other’s backs from the beginning. Their relationship is strained by hiding and helping a human child who has wandered into the monster world; but their status as besties (beasties?) is never in doubt. This is probably the purest buddy movie on my list.

Adam: Good choice! I need to give Monsters, Inc. another chance. I haven’t seen it in a while. One thing I like about these movies is that the Mike and Sully characters are so different and yet they are good pals in part because they balance each other out so well. 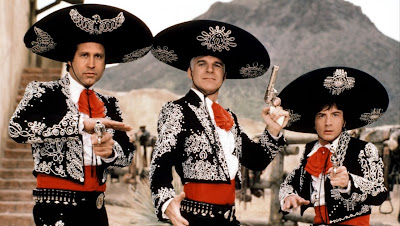 Erich: Who says a buddy movie can’t have more than two buddies? This John Landis-directed comedy is less a story centered on a friendship than an Avengers assemblage of comedy greats: starring Steve Martin, Martin Short, and Chevy Chase and produced by Lorne Michaels. The movie is filled with memorable gags, quotable lines, and catchy music, but the draw is seeing Martin, Short, and Chase together onscreen. Do you still question my choice? Well, I’m about to blow your mind. Did you know that “Amigo” is the Spanish word for “Friend”? And that “Friend” is the English word for “Buddy”? BOOM!

Side note: Although we will have a chance to test this theory when THREE AMIGOS is inevitably remade with Josh Gad, Zach Galifianakis, and Ed Helms, it's a good thing this movie was made in the '80s because can you imagine how Twitter would react to it if it came out now? Three white guys save the day in a Mexico where half of the people talk like Speedy Gonzales, and where Mexican women find said white guys irresistible for no good reason, despite them being directly responsible for their church being blown up by bandits. Yikes!

Erich: I could have chosen any of the films in Edgar Wright’s “Cornetto Trilogy,” but just for fun I decided to go with the one in which Simon Pegg and Nick Frost are the least chummy. This complex capper to the trilogy spends much of its running time with Pegg and Frost at each other’s throats, but that booze-fueled animosity is balanced by the addition of Paddy Considine, Martin Freeman, and Eddie Marsan. It’s not a traditional duo buddy movie (see Three Amigos! above), but the way it tracks how people and friendships change over time might make it the best buddy movie in recent years. That it’s an Edgar Wright movie makes it one of the best movies of recent years, period.

Adam: It really nails how awkward it can be to reconnect with old friends but then after a while you find that groove that made you friends in the first place. 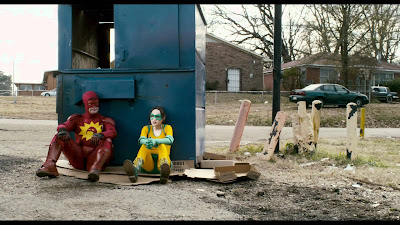 Erich: Certain modern comic book movies pretend they are interested in exploring the gritty reality of what it would be like if superheroes existed, but none of their catastrophic destruction and cowled growling can hold a candle to James Gunn’s comic book black comedy. Rainn Wilson’s Crimson Bolt is messed up in ways Batman can only dream of—turning the pain of losing his wife into a self-righteous crusade that involves bashing in petty criminal brains with a pipe wrench. But he looks downright sane compared to Ellen Page’s Boltie, his twisted sidekick who takes the crazy up a notch and eggs him into the film’s gruesome endgame. The pair share secret identities and misdemeanors in ways that bind them together as buddies, but there’s no way their partnership is going to end well.

Adam: I think this one is also interesting because Super and Boltie seem to bring out the best/worst in each other. It's like they might not have the nerve to do what they do on their own, but their pairing emboldens one another.

Erich: In many ways, the friendship between human child Elliott and “E.T.” E.T. hearkens back to boy and dog stories like Lassie and Old Yeller. But Steven Spielberg’s kid-friendly alien movie is about something deeper than pet and master. In fact, it’s E.T. who wears the short pants in this relationship—making Elliott do his alien bidding through mind control and a symbiotic connection that almost results in the boy’s death. Yes, the ending always makes me cry, and it is a stone cold classic, but you gotta wonder whether Elliott would have been better off if he’d never met E.T. He would have been able to eat that pizza, at least.

Adam: I think Elliot is better off for having met E.T. Elliot is sort of a misfit and E.T. is his soulmate for lack of a better phrase. I always read it that Elliot gains a little peace of mind because he found someone who is kind of like him.

Erich: I was mostly joking about Elliott being better off without E.T. Of course he's better off having met and bonded with an alien. And not just because he kissed a girl (and he liked it). He got to hang out with a cool extra-terrestrial that wasn't there to shill for McDonald's. Two lost creatures find each other, save each other, almost lose each other, and then are connected forever by E.T.'s promise he will always be in Elliott's heart. They are an inspiring duo, and I'm a total dick. 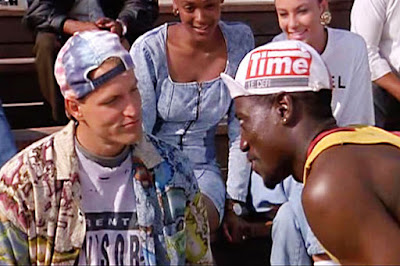 Adam: Not only one of my favorite buddy movies but also one of my favorite sports movies period. WMCJ is a comedy that's actually funny and has some stakes. What makes this a special buddy movie is that it has two opposites (race, background-wise) but they become friends because they share a common ground: basketball (and gambling).

Erich: Am I a horrible person if I admit I've never seen this one? I mean, I know I'm racist, but I would hate for anyone to think I'm horrible. Finding out White Men Can’t Jump is one of your favorite sports movies makes me want to see it, though. Which makes this conversation a kind of buddy movie, right? *Gasp!* WE were the buddies all along.

Adam: Of course we're buddies! I'm jealous that you've never seen White Men Can’t Jump. It's very much of its time but I think you'd like it. The writing is phenomenal.

Adam: Interesting we both picked a Pixar movie. On most days, I would still say I like the original Toy Story the best of all of the Pixar output. It's funny, clever, still looks great and was a watershed moment in cinema, not just in animation. I love that Woody and Buzz Lightyear are adversarial at the beginning and slowly grow to learn they can co-exist and that a pecking order is no longer necessary. It makes their journey to becoming buddies that much more rewarding.

Erich: The Toy Story movies are great. At least the first two. I haven't seen 3 since the theater. I may prefer what Toy Story 2 has to say about growing up and larger questions about love and legacy but the original is a charmer. When I first saw ads for this movie I thought it looked dumb. Then I saw it during a free campus movie night in college and was blown away by how smart and funny it is. Buzz and Woody's enemy-to-friend arc may not be as groundbreaking as the animation, but it gives Pixar's rich CG world an emotional core—a hallmark of the studio's best films and one of the big reasons they dominated family films for a decade. 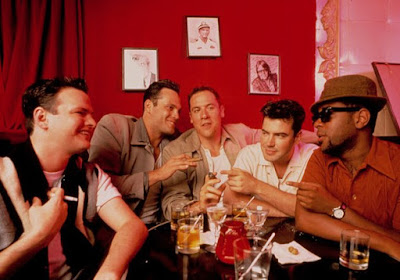 Adam: I watched this one again recently and was surprised how cute and quaint it all feels. Dating and bro'ing out has changed a lot in the past 19 years. The thing I love about Swingers is that the buddies in the movie (whether it's Jon Favreau and Vince Vaughn or Jon Favreau and Ron Livingston) are truly, utterly there for one another. They listen, they empathize. It's so rare to see in movies about male friendship where most times (to prove how macho they are) the buddies have to act like they hate each other.

Erich: This movie is, like, two studio rewrites away from being yet another obnoxious comedy about a cool dude weekend gone wrong. If it had been made 12 years later, it probably would have had the heart beaten out of it to make room for more catchphrases and some gratuitous boob shots. I agree this is a movie of its time, but while people may remember it for the lexicon, Swingers is an indie movie with things on its mind. For all their bluster and swagger, Vaughn and Favreau are vulnerable in a way movie dudes (and the kind of "bros" who worship Swingers) usually aren't.

Adam: Totally one of the best movies of the 1990s and a movie I find deeply affecting, namely because breaking out of Shawshank can be used as a metaphor for almost any life struggle. I love the friendship between Andy and Red in this movie because it's based mostly on intelligence. Red is street smart where Andy is book smart and the two learn and grow from their friendship with one another.

Erich: It has become fashionable to either hate on Shawshank, or overpraise it as one of the best movies ever made (I'll give you a pass because you said "of the 1990s"). My opinion falls somewhere in the middle. I watched this movie so many times I don't really ever need to see it again, but I get what you're saying. Whether or not I find Red and Andy's friendship believable or satisfying, it is integral to the story to the point where it's impossible to untangle genuine emotion from the long term breakout plan. Maybe it's mostly about surviving by your wits, but that's okay. We all need friendship to survive. 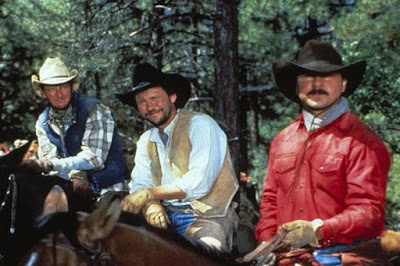 Adam: One of the best comedies of the 1990s and a great Western to boot. Not bad, Billy Crystal. Besides being consistently funny, City Slickers is great because it has such a big heart. I love that the friendships of Crystal, Daniel Stern and Bruno Kirby stretch from their childhood to their adulthood and are enriched by past history and accumulated experience. Like so many friends we all have from back in the day, when you get back together with them as adults it's sort of startling how quickly you fold back into the group dynamic you had as children or teenagers. The more things change, the more they stay the same.

Erich: Shades of my The World’s End pick, but with more calf birthing. I like it. I haven't seen City Slickers in forever, but it was on heavy rotation in our house. It's a warm, safe movie in the way only a '90s comedy could be, but I get what you mean about long-term friendships and the ways people fall into old habits when removed from daily routines. Also, I think this was about the time I realized that Daniel Stern was the voice of older Kevin on The Wonder Years. The '90s were really something, weren't they?
Posted by Patrick Bromley at 12:00 PM