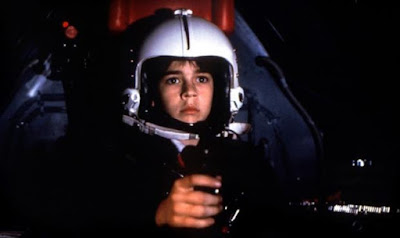 It's that time of year, when everyone I know has started talking about their upcoming summer holiday plans, fishing, camping, road trips and weeks sitting at the lake. Thus far, our summer vacation is looking like a whole lotta work, work and more work. But as lovers of film, we can easily take a holiday at any time by losing ourselves in a movie for a couple hours. I decided to go one better and remove even the choice of the "what to watch?" process by requesting that my husband Daryl plan us a mini marathon of his choice in which we could escape.

We have similar, but quite often very different, movie tastes, so I thought it would be fun to take a holiday from my style and immerse myself in his. He did not disappoint, and on a holiday I did go!

"There's just something about Daryl"

His first choice, really needs no explanation: 1985's D.A.R.Y.L. If someone had made a movie about me, I would totally create a marathon around it as well! The movie had been on our radar since it was recommended a few months ago via Netflix This Movie (it was taking too long to find the column so I gave up, but off the top of my head I believe it was Patrick's pick of the week), and it was a first-time viewing for both of us. Featuring Barret Oliver (that whiny kid who reads the Neverending Story) as D.A.R.Y.L. (which oddly enough resembles a young “My Daryl”), a young boy that is discovered wandering around with amnesia and is taken in by a foster family. I have a special place in my heart for all things '80s even if they are new to me in 2015, and this movie brings a wonderful sense of nostalgia from the very first beat. From the opening excitement of the chase scene to the mystery surrounding the picture perfect little boy and to the eventual explanation of who he is, I was entertained throughout. Even the over-the-top ending, while far-fetched, fell in line with every young child's imagination and worked for me.

The next movie on our list, makes perfect sense if you know my husband. He can be over-the-top, repetitive and wonderfully weird (I would like to say that opposites attract, but I have a confession: many people claim he is the "normal one" in our relationship), so 2001's Freddy Got Fingered is the natural choice. We both grew up watching The Tom Green Show and have of course watched this many times. I had not seen it in about 10 years, though, and we wound up watching the commentary by Tom Green version, and believe it or not, it was quite interesting. I still turn my head away at the couple scenes involving animal porn (ugh ugh UGH), but Ima go out on a limb and state that I sing the “Daddy would you like some Sausage?” part better than Tom. It's not my fault that it just flies out of my mouth during conversation at least once a month. Obviously since I have not re-watched this movie in over ten years, it's safe to say that it is not a typical movie choice of mine, but as it turns out I was happy with it's inclusion in Daryl's mini-movie marathon picks.

Moving onto the most Daryl of them all, his third choice is brought up in conversation on a daily basis (even more so since Patrick wrote about its release on Blu-ray last month), so I knew that it would definitely be included: Bio-Dome (1996). If you are anything like us, you had a movie during your teens that you would watch on repeat and spent many hours quoting it with your friends. Daryl's was Bio-Dome. You wanna know what true love is people? I have watched this movie twice in the past year. Because I love my Daryl. And I find something to laugh about every time, because it is his favourite movie. This time it was the soldiers running around with the battering ram chanting HUT HUT HUT... While I can never agree with Daryl's statement of Pauly Shore being the best actor alive, (sorry honey), I can definitely get on board with loving another of his movies, Encino Man. That movie has so much to love in it. In fact, if there's a Caveman! day in our Junesploitation, that'd be my pick hands down! 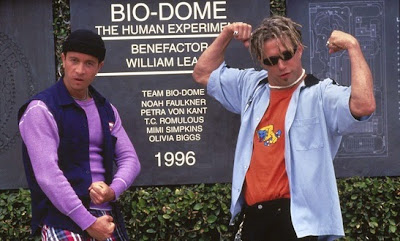 Lastly, my husband has a thing for watching cartoons, especially on weekends. And I love it! According to Daryl, Sunday mornings are only for cartoons. I can dig that. His reasoning behind the last pick was simply this: I am his beauty and he is my beast. So we took another trip down memory lane with Disney's 1991 retelling of the classic tale Beauty and the Beast. Although it is a hands-down top five of my favourite Disney films, I find little of myself in Belle, yet if that's how Daryl sees me, who am I to try and change his mind?

I have mentioned before that differing movie tastes open the doors for conversation and might open your mind to seeing a film in a new light. Knowing that my go-to genre at any time during the day and any day of the week is horror could give you a somewhat twisted impression of me, but blood, guts and gore are not what I wear on my sleeve. In comparison, I don't know how many times I have called Daryl on his Tom-Greeny-ness, or listened to his Bio-Dome quotes, as who he is today is due to the thousands of hours he spent immersed in his favourite films and TV shows as a kid. And I for one wouldn't change a thing. Wonderfully weird? Perfectly perfect is more like it.

I think I have reached my lifetime Bio-Dome quota, though. Sorry, honey.
Posted by Patrick Bromley at 2:00 PM