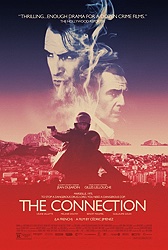 For #Junesploitation Cops day, here's a gritty new cop drama straight out of the early 1970s.

The Connection (aka La French), the latest effort from French filmmaker Cédric Jimenez, is a kind of sequel/side-quel/spiritual cousin to William Friedkin's 1971 masterpiece The French Connection. It picks up where that film left off not chronologically but geographically, showing the French side of the drug trade referenced in Friedkin's film. It's a stylish, slick and very cool movie. But it ain't The French Connection.

Jean Dujardin stars as Pierre Michel, a magistrate who is promoted and put in charge of organized crime. The new position pits him against Gaëtan Zampa (Gilles Lellouche), who basically runs the French drug trade and is feared throughout the countryside. As Michel becomes more and more obsessed with catching Zampa and his family begins to pull away from him, it becomes an all-or-nothing proposition: catch the bad guy or possibly die trying. 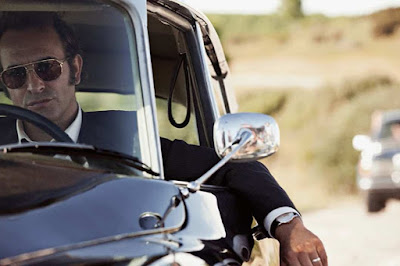 In many ways, The Connection has a lot in common with Michel Nazanavicius' Oscar-winner The Artist, the film for which Dujardin won the Best Actor Academy Award. It is a very good approximation of an older film -- in this instance '70s cop dramas, not silent comedies -- and an exercise in style but not a whole lot more. It's the kind of movie about which I really have no complaints but also not a ton to dig into, either. The Connection succeeds at meeting its goals; it's not an all-timer, but should it ever come up in conversation two or three years from now, we'll probably all nod our heads and agree it's a cool movie.

It's fascinating to watch Dujardin as the lead; he has the perfect look and exudes effortless cool and swagger. But his facial expressions are so strong that there's a learning curve in adjusting to them in a context where it's not considered mugging -- his performance in The Connection is like his work the O.S.S. 117 movies minus the self-aware winking at the camera. He's good in the movie, but made better by the rock solid supporting cast, all of whom inform their characters with small bits of background detail in a short amount of screen time. Gilles Lellouche is particularly good as Michel's mirror opposite on the other side of the law. His is one of the most human villains I've seen in a movie in a long time. Unlike most Big Bad Guys we see, Zampa is shown not just to care about his wife and kids, but also about the men he has working for him. They are not just his lackeys; they are his friends, and when harm comes to them his sadness and anger is palpable. He's a bad guy, sure, but he has many of the "good" qualities that Michel lacks. 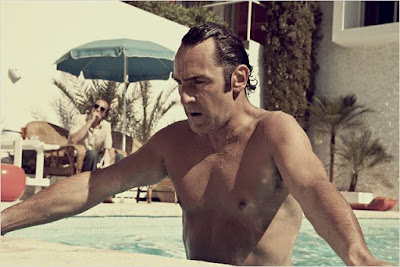 That's why I don't think it's an accident that Dujardin and Lellouche look so much alike; in more than one scene (particularly the long shots), I needed a moment to figure out exactly who I was looking at. There are many parallels between The Connection and Michael Mann's Heat in the way that both movies examine a case from both sides, giving equal weight to the cops and the crooks and finding the similarities between them. While I don't think Jimenez is exactly saying that cops and criminals are two sides of the same coin, I don't think he's not saying that, either. Aside from what they do, the two men are a lot alike: both respected (even feared), both family men and perfectionists when it comes to their work. The real major difference between them is their moral center. The Connection never makes the argument that with a few alternative choices the two men could have switched places because it acknowledges that they are different at their core. It's in the details that they are so much alike.

I really liked The Connection. At over two hours, it might have used some tightening up. There's a lot of style but not a ton of substance. It's a solid cop movie, one which looks and feels just like it was made in 1975 (the year it begins). The film's costume designer, production designer and cinematographer Laurent Tangy are all to be applauded for the work they've done in creating a film that feels authentic in a way that supersedes just being a stunt (it was even shot on 35mm and looks it). Drafthouse Films, the company distributing the movie, continues their streak of putting out good and interesting movies. This one is more conventional than most of their catalogue, which seems like an odd thing to say about a French police drama/sequel right out of 1975. Such is the idiosyncratic nature of Drafthouse Films.

The Connection is currently playing in limited release.