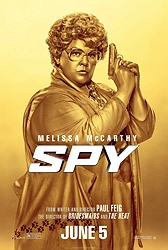 This summer's worst-titled comedy is also one of its most ok movies!

Spy, the third collaboration between writer/director Paul Feig and star Melissa McCarthy (after Bridesmaids and The Heat) is a brilliant vehicle for its star, who gets to do all the things on screen that have made her one of the biggest names in comedy in the last few years. She's foul, she's physical, she's awkward, she's sweet. But the strength of her performance and the incredible span of her character arc make this not just the ideal vehicle for her, but her best role to date. She's the whole show. Lucky for Spy, she really is the whole show.

McCarthy plays Susan Cooper, a mild-mannered CIA analyst who sits at a desk and assists on every mission for super spy Bradley Fine (Jude Law). While tracing a nuclear weapon hidden by spoiled brat terrorist Rayna Boyanov (Rose Byrne, who somehow has become one of the most dependable comic actresses working today), the identities of every field agent are compromised, so Susan volunteers to go into the field for the first time ever undercover as a dowdy cat lady. So it's off and running to Paris, Italy and Budapest, where Susan becomes the expert spy she always had the potential of being and is helped/thwarted at every opportunity by fellow CIA super spy Rick Ford (a very funny Jason Statham), who can't stop bragging about his accomplishments long enough to let Susan save the day. 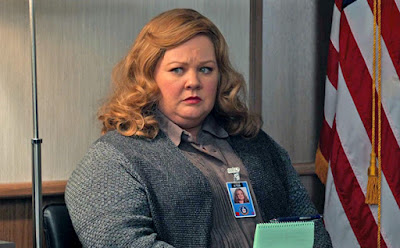 The best thing about Spy is that, coming off of junk like Identity Thief and Tammy, it's going to remind everyone why Melissa McCarthy deserves to be a big movie star. Yes, I think there will be people who dismiss it outright because it's "another Melissa McCarthy movie," which they equate with her being made fun of for being big and falling down. Yes, she falls down a few times. It's called physical comedy, and it didn't seem to be a problem when skinny white men did it for over 100 years. And there really aren't any jokes made about McCarthy's size per se, just the fact that she doesn't fit the bill of a traditional movie spy. We should consider this progress, especially when the movie spends its running time having McCarthy upend nearly every single one of our expectations without really calling attention to the fact. Feig is casual in the way he expresses images and characters that feel downright revolutionary for a studio film -- there is no "can you BELIEVE how feminist this is?" when most of the main characters in a summer action comedy are female and don't spend time talking about men and there's no moment at which the film feels impressed with itself for saying that this woman who you don't think could be a spy could actually be the very best spy. I love that.

But this is a comedy, and I didn't laugh quite as often as I hoped to. Like so many Hollywood comedies to spring up in the wake of The 40-Year Old Virgin, Spy feels overlong by about a half hour and edited in such a way that makes it feel sloppier than it should. Whether that's because Feig was cutting around improv and ad-libbing or because he just shot a ton of footage I really can't say, but the result is a film that feels shaggy when it should be airtight. There are laughs throughout the movie -- enough to justify a recommendation -- though they're mostly often tossed-off bits of dialogue or small character moments, not the jokes designed to hit the hardest. Still, a laugh is a laugh is a laugh. 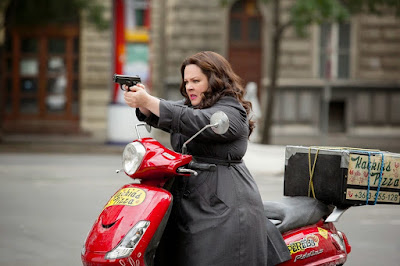 It's not a particularly great spy movie either. Again, Feig isn't interested in parodying the genre; save for some Bond-inspired opening titles, there's nothing in Spy that exists to spoof the spy genre. It is straightforward in its approach, which has the detrimental effect of making the movie feel overly busy and plotty while at the same time shoring up just how strong McCarthy's performance is; she doesn't have to good in a goof of a spy movie, but in a real spy movie. Feig is trying to make an action movie that legitimately feels like an action movie, too, at which he is only somewhat successful. What Feig is doing doesn't appear to be a style parody. With the exception of one sequence involving throw up, he's not incorporating a bunch of overly familiar tropes as a way of taking the piss out of them -- he seems to think this is what action movies really look like. Someone might want to tell him, then, that speed ramping has been out of fashion for at least five years. On the plus side, Feig shares Seth Rogen's glee for graphic violence in a comedic context, giving the bloodshed a particularly nasty edge to it that scores laughs for its audaciousness. It's the rare comedy that can get away with showing a person's entire throat dissolving from acid.

If there's anything in Spy that skirts up against parody, it's Jason Statham's performance as asshole super spy Rick Ford. It's not anything he does in the performance (though his dialogue is ridiculous and wonderful), but rather his very casting that makes the film at least partially self-reflexive. While there's not a ton of genre commentary going on in Spy, I like that it makes a point of building up a plus-size woman into an action hero while exploding the myth of our testosterone-fueld he-man, turning it into a cartoonish exaggeration that's all talk and very little effective payoff. Does Feig want to destroy the traditional action movie? Of course not. It's obvious he's a fan. But he does argue that there are some other people that might be allowed to play in the same sandbox. 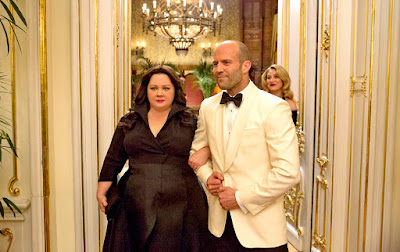 I wanted to really love Spy. Maybe my reaction to it has something to do with my expectations. After all, I wasn't expecting to be crazy about The Heat and I was pleasantly surprised, but I also think that movie benefited a great deal from the relationship between McCarthy and Sandra Bullock and the fact that Bullock got to carry at least half of it. Spy ends up covering a lot of the same territory -- female action heroes; casual, confident feminism; the importance of sisterhood and a demolishing of the ol' Bechdel test -- and while it's equally overlong and shaggy, at least it had the element of surprise. Spy is an important comedy and a pretty good one as far as recent studio comedies are concerned. If it's not great, well, that's probably an unfair standard to which I'm holding it. I continue to root for Paul Feig, whose voice is an important one in mainstream filmmaking even if he hasn't yet made what I'm sure is his best movie. And I continue to root for Melissa McCarthy, who here reminds us that her ascent to superstardom was not a novelty or a fluke. She works for it in Spy, and boy does she earn it.
Posted by Patrick Bromley at 5:00 AM