THRILL to the spectacle of America’s Founding Fathers... SINGING!

For many reasons, 1776 has held a special place in my heart. My school, Our Lady of the Wayside Junior High, took my whole 6th grade class on a field trip to see it at a real movie theater when I was 11. Imagine -- a movie musical about John Adams, Thomas Jefferson, and Benjamin Franklin and their struggle for independence! More exciting than another afternoon with the nuns, let me tell you.

While we watched the new 4K Blu-ray disc, my wife revealed that this movie was her junior high field trip as well. She went to public school. I am guessing they took the two schools to see the movie on different days, so that after the screening the two groups of kids wouldn’t get into fistfights in the parking lot over the separation of church and state. 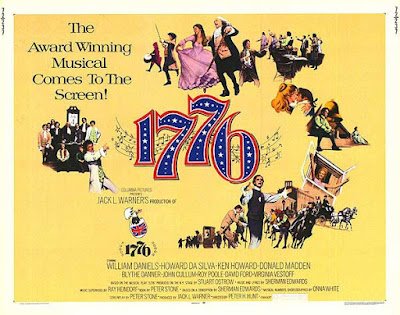 I also have a long history with 1776 on videodisc: first I owned the original Sony laserdisc reconstruction, which included the cut number “Cool, Cool Considerate Men” from a faded, black and white work print; then I upgraded when the studio released a more ambitious restoration on laserdisc; this was followed by a straight port over to DVD; and now I have the brand, spanking new Blu-ray, which includes two different versions: a theatrical restoration and an extended director’s cut. Because my media collection is designed to grow and adapt to changing times -- just like the U.S. Constitution!

Before the film was even finished, there was a screening at the White House and then POTUS/Felon in Chief Richard Nixon found the “Cool, Cool Considerate Men” number insulting to conservatives (because, of course, it is.) Nixon pressured producer Jack Warner to cut it. After the film’s original triumphant premiere at Radio City Musical Hall, Warner decided the film was still too long and cut some more. All of this material has been restored to the film.

The Plot In Brief: John Adams (William Daniels) is fed up with the Continental Congress because all they do is argue and never get anything done. The Congress is fed up with John Adams, who is obnoxious and disliked. Adams believes the 13 colonies should break free from England and establish a new nation; he and Benjamin Franklin (Howard Da Silva) convince Richard Henry Lee of Virginia (Ron Holgate) to finally push the proposal through. 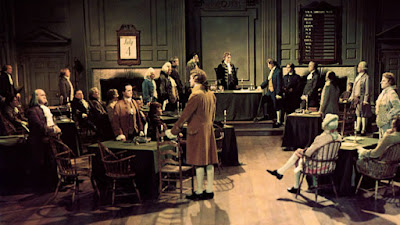 When the conservative Southern colonies work to block the proposal, Franklin and Adams buy some time by calling for a “declaration” to be written to inform the world of their grievances against the King. A reluctant Thomas Jefferson (Ken Howard) agrees to write the declaration. Will he be able to finish it? Will it be compelling enough to secure the Congress’ unanimous vote to forge a new country?

You’ll just have to watch the movie to find out, babies.

The new transfer is by turns dazzling and disappointing. 1776 is a film that I am very familiar with, and while it has never looked better in any home video format, I was still critical of this transfer. The restored footage looks best -- crystal clear, colorful, and sharp. Yet the footage from the released version is a mixed bag -- sometimes revelatory, sometimes murky and disappointing. It doesn’t help that the color palette of the film is filled with dusty reds, ugly browns, and smudgy greens. While watching the film, I began to think that I may have been spoiled over the last few years by magnificent 4K transfers and am thus let down by one that’s only very good. (I’m wondering if the new transfer will be the one used for TCM’s annual 4th of July broadcast of the film.)

The performances of Howard Da Silva as Benjamin Franklin and John Cullum as Edward Rutledge stand out. The Hollywood Blacklist of the 1950s denied the world any movie performances by Howard Da Silva for more than a decade. This is a particular tragedy, as Da Silva was that rare actor that could play both heavy drama and musical comedy. He retreated to the Broadway stage, where he won a Tony Award for Fiorello! and was then cast as Franklin in the stage version of 1776. I had always wondered why he was not on the original cast recording, which I would check out of my public library regularly as a teen. I later discovered that Da Silva suffered a heart attack shortly after opening night; his understudy, Rex Everheart, is featured on the record. Da Silva’s performance in the movie speaks to the 1200 or so times he performed the show on stage; every laugh, inflection, and nuance is there. He is a very funny Franklin, but never a buffoon; he retains the essential respect I am sure the real Franklin inspired.

John Cullum was not the original Rutledge on stage, but he was certainly the best. While many critics opine that “The Lees of Old Virginia” or “Mama, Look Sharp” are the show-stopping numbers in 1776, I have always regarded Cullum’s performance of “Molasses to Rum” to be the film’s tour-de-force. When he learns that Jefferson’s original draft of the Declaration contains a codicil about freeing the slaves, Rutledge warns that the southern colonies will not vote for independence if that paragraph stays in; his song mocks the North’s hypocrisy about slavery, suggesting that everyone in the colonies benefits from slavery, New England as well as South Carolina. It’s a dark and chilling performance, and adds dimension to the film’s portrayal of history.

Cullum is still acting today; he memorably portrayed cigarette magnate Lee Garner, Sr. on the first two seasons of Mad Men, appeared in a few episodes of 30 Rock, and recently had a featured role in The Unbreakable Kimmie Schmidt on Netflix.

My quibbles with 1776 are few. I realize this movie is not everyone’s cup of (Boston) tea (Party). The film features virtually the entire original Broadway cast, which is largely a good thing, except when a few performers forget to take their performances down a notch for the intimacy of the camera. I was always delighted at the way lyricist Howard Sherman turned John and Abigail Adams’ actual letters to each other into songs; on the commentary, director Peter Hunt explains that, because the letters were so intimate, he decided to show the two in close physical proximity as they sang—unfortunately, this leaves the two performers bellowing at each from inches away, as in a Nelson Eddy/Jeanette McDonald operetta. The effect is ludicrous and ruins some potentially moving moments. The song is still great. 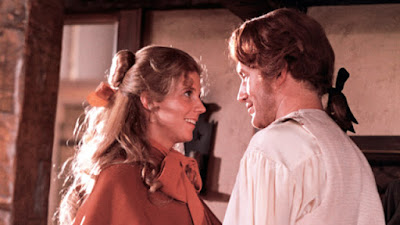 One particular line in the film still resonates in my mind more than forty years after I originally heard it. Ironically, it occurs during the “Cool, Cool Considerate Men” number, which was originally cut from the version of the film I first saw on that field trip. As I mentioned, I often borrowed the original Broadway cast recording (on cassette!) from my local library in order to hear the number, and it is terrific that it has been fully restored here. John Dickinson is wondering aloud why John Hancock -- a man of property -- does not fall in line with the other conservatives; as Dickinson says, “Remember that most men without property would rather protect the possibility of becoming rich, than face the reality of being poor... and that is why they will follow us!” In our “Fox News” reality, as impoverished Americans are often convinced to vote against their own self interest, no truer words were ever spoken. 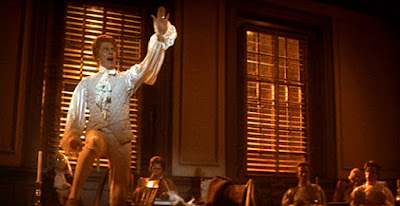 AN ANNOYING AUTOBIOGRAPHICAL PAUSE: I may be blind to the film’s faults because of its subject matter. I am by nature bitter, angry, and cynical, but one thing I refuse to trash in the service of being hep is my love of country. When I get on a soapbox, as I am occasionally wont to do, it is to argue that whatever I’m disagreeing with goes against what I feel is the essential spirit of our country: not to restrict our liberties, but to protect and expand them. In other words, I often want America to be MORE AMERICAN. In its (admittedly romanticized) portrayal of seminal events in our nation’s history, 1776 supports this idea. This country provided my immigrant grandparents with opportunities no other country could match. Like “the hippies” referenced recently by Supreme Court Justice Antonin “Grumpypants” Scalia, I treasure our freedoms of speech, assembly, and due process. Recent Supreme Court decisions make me even more hopeful about the future of the United States. I am never able to get through the last twenty minutes of 1776 without getting misty eyed.

P.S. This Saturday, America celebrates its Independence Day, and this is a perfect opportunity for all of my readers to declare their independence... from mediocre poetry. Mayapple Press has just published my wife’s first full-length book of poetry, Alloy. Hooray for freedom of the press!