I was first attracted to this movie because it is the only feature film directed by Ernest Pintoff, a series television veteran and Oscar-winning director of the short animated film "The Critic" with Mel Brooks. I also dug the title.

Dynamite Chicken is a 68 minutes-without-credits montage of annoying, pointless “comedy” bits. It’s very aptly named, because this movie is an unfunny, disjointed, poorly shot, aimless mess—just like if you actually dynamited a chicken! (Don’t dynamite a chicken.)

The “idea” of the film seems to be that it would be “funny” to stich together material from many sources—to wit:

1. Richard Pryor walks the streets with a basketball, riffing on any subject that comes into his head. This is the most entertaining portion of the film. I would gladly watch footage of Richard Pryor sleeping. 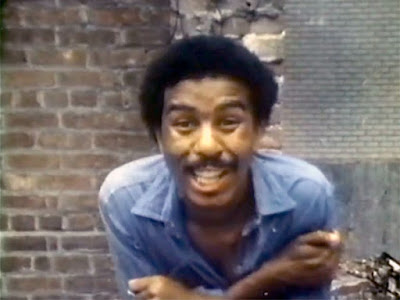 2. Poets including Frank Lauria, Leonard Cohen, and Allen Ginsberg recite their work, photographed in extreme close-up with harsh, unflattering lighting or accompanied by pointless animation that does not quite seem to fit the poem.

3. Famed improvisational comedy troupe The Ace Trucking Company performs several unfunny skits. We follow an obscene phone caller, we are privy to an actor's audition, we witness the filming of an Aqua Velva aftershave lotion commercial, etc. (Could this be Fred Willard's first feature film appearance?)

5. A series of naked women audition for roles in a series of classical plays.

6. Paul Krassner performs a bastard hybrid of college lecture/stand-up comedy/ bullshittery. At one point, he suggests that coffee causes DNA damage. (Actually I looked it up; there are medical studies that confirm this, babies.) 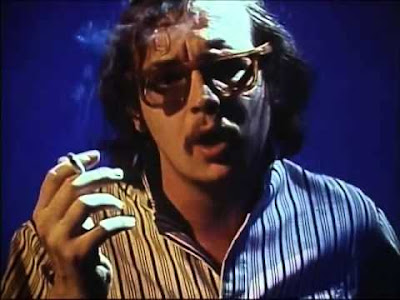 7. Michael O'Donoghue, one of the infamous original writers of both the National Lampoon and Saturday Night Live, provides several short features. One of them involves Sister Filomena, a stripper nun; O'Donoghue narrates with a series of bad Catholicism puns. Another involves him reading his Lampoon comic "Phoebe Zeitgeist" out loud. Again: he reads a comic strip out loud to us.

10. Andy Warhol is interviewed for less than one minute.

12. Five minutes of amateur news footage from John Lennon and Yoko Ono's famous honeymoon "Bed-In For Peace." At one point the camera zooms in on the pajama-clad Lennon picking his foot. From this day forward we shall refer to Dynamite Chicken as "that film where Lennon picks his foot." 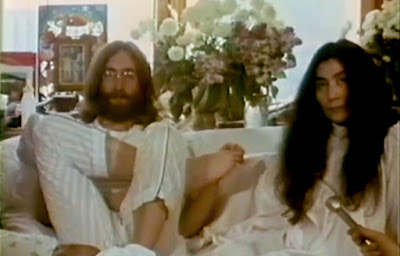 That's about it. Oh, and also Sha-Na-Na. Of course.

The sad part is, I am afraid this list of skits 'n' bits actually makes the film sound BETTER than it is, and here is why: less a film than a laundry list of trendy topics, Dynamite Chicken is ultimately rendered meaningless by too many snot-nosed montages and too much film school gim-crackery. The film might have worked as an instantly dated look at the late 1960s/early 1970s zeitgeist… if only ANY single segment had been allowed to continue uninterrupted for more than three minutes. The Richard Pryor monologues, the Ace Trucking Company bits, the Paul Krassner talks are all spread out across the film—and are constantly interrupted by other material that is then also constantly interrupted. The film resembles an ADHD patient surfing between thirteen different channels while cooking a pancake breakfast, or a speed freak given the job of editing together a documentary on the counterculture while it’s happening. Sheesh. 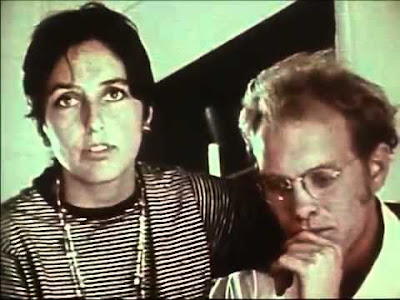 Maybe Dynamite Chicken is either a) trying to simulate a specific kind of drug experience or b) meant to be viewed while under the influence. Either way, I invoke my rule when it comes to any entertainment designed to be experienced under the influence: we cannot excuse Dynamite Chicken by saying it is meant to be enjoyed while tripping on LSD and that alone will render the film fascinating, because PEOPLE ON LSD FIND EVERYTHING FASCINATING. They would gladly watch a nine-hour documentary on dryer lint. 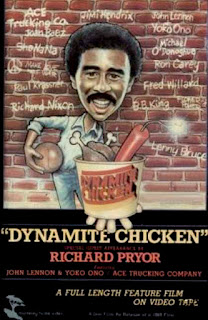 Ultimately the film fails to make any points, or even to develop an argument for the generational positions it is exploiting. Dynamite Chicken merely provides a parade of popular youth movement attitudes and platitudes. Here are some:

8. Everyone likes to look at naked women (I know, this seems to negate #5)

9. Profanity is delightful and "swear words" are always funny, all by themselves.

11. Unfunny comedy is funny, as long as it reflects the attitudes of the filmmakers.

Don't believe me? Watch it for yourself. Bet you don't make it past the fifteen- minute mark, babies. Also, in case I did not make myself clear, do NOT dynamite a chicken. Trust me on that.