The Overlook: Raising a Movie Kid

This week, gentle readers, I beg your indulgence as I try not to overlook my favorite Movie Kid...

Tomorrow my son Jake graduates with an MFA in Screenwriting from the American Film Institute Conservatory. I am immensely proud of him. One of my many failings as a parent is that I did not say nearly enough over the last twenty-five years that I was immensely proud of him. I taught Film Studies in a public high school for thirty years; the boy now seeks a career as a Hollywood scribe. The apple does not fall far from the tree.

And I am immensely proud of him.

If we view parenthood as a tunnel, I can now see the light at the end of the tunnel. I realize that most of my readers are currently pondering the tunnel, or have just entered the tunnel, or are halfway through the tunnel. This doesn't mean that I am now abdicating fatherhood; I just think the nature of my relationship with my son is about to change again as he reaches a milestone we've seen coming from way down the pike. I am looking forward to this. 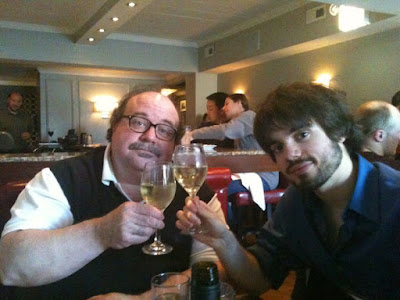 The Plot In Brief: When a mommy and a daddy love each other (and movies) very much, they decide to "share their popcorn" in a special way... let's just say that one day (SPOILER ALERT) Jake was born and now it's twenty-five years later.

Jake took to movies from an early age. His first favorites were the original Star Wars trilogy. To illustrate how long ago this was—and in a suburb far far away--he used to watch them on laserdisc. One year for Christmas, we gave him a VHS tape of the documentary Star Wars To Jedi: The Making of a Saga, which he loved and watched a LOT.

Not quite understanding that these movies had been made many years before he was born, he began to ask for Star Wars toys, so his mother and I would dutifully scour vintage toyshops and garage sales. I'd put the word out to my students and they'd bring in mostly-working spaceships and shoeboxes filled with Star Wars action figures. That's how Jake got a Shuttle Tydirium! And an AT-AT... a Slave 1... a Tie Fighter... an X-wing... you get the picture. Oh, here's the picture: 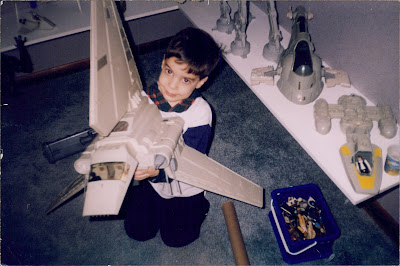 Jake's first movie-in-a-real-movie-theatre was supposed to be Beauty and the Beast, but all that "haunted, wolf-filled forest" stuff with Belle's dad at the beginning freaked him out, so we left. Yes, we went home. (I wish more parents today would do this.) See, he wasn't quite ready. And if you want your kid to grow up loving movies, you don't spend his first movie-in-a-real-movie-theatre hissing at him to sit down, shut up, and stop being SCARED BY THE SCARY STUFF. You take him home.

Instead, Jake's first full-length movie theatre experience was Ferngully: The Last Rainforest. (If you're not familiar with it, it's actually really good.) This time, Jake was ready. In fact, he became so immersed in the experience that at one point, when the cute little lead pixie needed to fly away into the forest, Jake stood up during that quiet moment, waving and calling "Goodbye, Crysta!" at the screen. And an entire theatre full of people went "awwwwww!" Because I may not have mentioned this yet, but when he was small he was ADORABLE.

Of course, wanting your kid to love movies does not mean he gets to see ALL the movies. Until he was about 10, we had a rule that when Jake watched a movie at a friend's house that wasn't rated G, he needed check with us first. The only time Jake disobeyed this rule proved the wisdom of our policy. The movie? Twister. It's not only PG-13, but particularly scary, especially for a kid growing up in Illinois (fifth in the nation for tornadoes. We rule!) Long story short: for years, our Jake was afraid of inclement weather. You know, one of those things that parents can do NOTHING TO FIX. See, movie ratings DO serve a purpose!

Starting in grammar school, Jake delighted in making movies with his friends during the summer with my video camera. I was often cinematographer, as Jake (like Orson Welles before him) preferred to both direct and star. In retrospect, I refer to these films as the "up and down the stairs" series because they featured him and his friends chasing some bad guy or monster around the house, and inevitably up and down the stairs. The climax of these homemade opuses was always staged in the kitchen or out on the patio, because they inevitably featured someone being shot or stabbed or bludgeoned. Even movie kids need house rules, and ours was "no fake blood on the carpets." The boys made it from chocolate and strawberry syrups, they used COPIOUS amounts, and that shit stains. 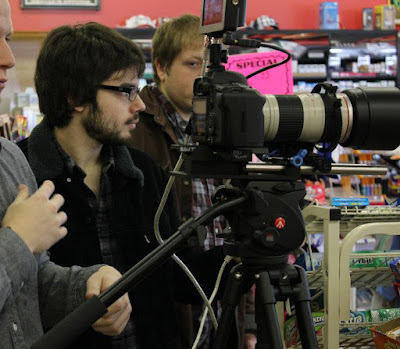 QUICK ASIDE: Eventually Jake graduated to crafting exploding squibs from condoms filled with stage blood. One day we had some guys come in to re-tile our kitchen floor, which involved moving the refrigerator several times. When they left for lunch, my lovely wife went in to check their progress and noticed something atop the fridge... it was a plate piled with blood-filled condoms. Now, there's a conundrum for you! Did the tile guys see it? How could they NOT see it? Which is worse: trying to ignore a plate of blood-filled condoms, or trying to explain a plate of blood-filled condoms? "Ha Ha! Oh, those! Yes, well they're my son's. It's not his blood! I mean, they're for when he shoots people... I mean, when he's filming his friends... shooting people... I mean... LEAVE NOW."

Jake's taste in movies was preternaturally good from a very young age. I remember some of the films he would re-watch again and again on DVD: Bowfinger, Big Fish, Pleasantville, and a couple other films that later became the subject of my previous column, "Unsung!" The one exception was Pokemon. Jake once dragged me to a Pokemon sequel just to get the special tie-in Pokemon card they were giving away. I fell asleep during that godforsaken film. (Gotta catch... some ZZZ's!) Truth be told, even he didn't like it much. He was more of a Princess Mononoke guy. Movie kid!

When you're a movie kid, parties are just an excuse to think about movies. The 1997 re-release of Return of the Jedi was perfectly timed for Jake's 7th birthday. (Ever try to form an X-wing out of cupcake frosting? My wife has.) Once we had all his friends dress up as their favorite movie stars and rented a limo to take them to Planet Hollywood in Chicago. (You haven't lived until you've spent an hour in a limo packed with costumed 8-year olds.) Being Italian-American, for Jake's high school graduation party we were duty-bound to serve the legally mandated buffet of fried chicken and mostaccioli; but the one spin we gave the standard grad party was renting an inflatable screen and a portable AV set-up, including video projector. After dark, Jake and his buddies enjoyed "backyard movies" on the inflatable screen. His program picks: a double feature of Billy Madison and American Grafitti. 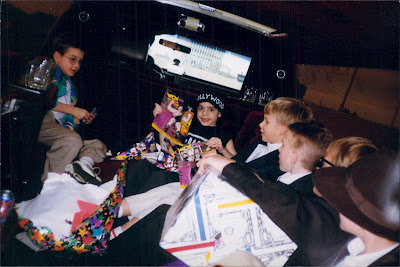 If I had to go back and do it all again—as both a father and a teacher—I would more often tell kids in my charge that I am proud of them. My father never did that; maybe that's why it took me a while to figure out. And the truth is, even if he hadn't grown up a movie kid, I would be immensely proud of my son. He is interesting. He is his own man. He does not take shit from anybody, yet he is an empathetic person who cares about the world and other people. He is cursed with the former trait courtesy of yours truly; I am sure he gets the latter trait from his mom. And though I know I JUST SAID I'd be proud of him even if he wasn't a movie kid, I think the hundreds of movies he watched, and loved, and shared with his movie-loving parents while growing up, helped in no small measure to make him the man he is today.

Over the last two years, Jake has been living in Los Angeles as a Screenwriting Fellow at AFI Conservatory. (He has even gone to screenings at the New Beverly Cinema with Dracu-Doug L.A. Doug.) I'm very fortunate in that he usually shares his finished screenplays with me. I realize my inherent bias in this matter, but I am both an English teacher and someone not prone to bullshitting—plus I taught Film Studies for 30 years—and I feel qualified to say that the work he has done at AFI is terrific, from the short first-year "cycle" films to the westerns to the "story-of-a-band" to the Vietnam saga to the television pilot that some cable network needs to snap up immediately. He is immensely talented. Last year his original screenplay Kingfisher won First Place in the West Field Screenwriting Competition. 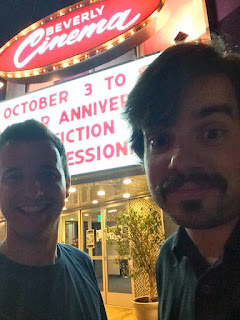 So tomorrow his mother and I will trek to the famous Grauman's (now TCL) Chinese Theater in Hollywood because that is where his graduation is being held. My wife's going to cry her eyes out because he's going to be in one of those cap and gown outfits, and he and his class of freshly-minted filmmakers will be ready to go and write the stories and craft the images that the rest of us will want to pay money to sit in the dark and watch. Some of us will be sitting beside the next generation of movie kids ready to jump up on their seats and wave at the screen because they believe it all so much. I think a lot about those days when Jake was that kid, about the hours we shared there in the dark, watching it all unspool, the hours we'd spend afterward talking, and the hours laughing and arguing about what we had all just seen. These are all a part of our lives, those hundreds of movies and those thousands of hours that we shared as a family--a movie family with a movie kid.

Have I mentioned that I am immensely proud of him?
Posted by Patrick Bromley at 5:00 AM