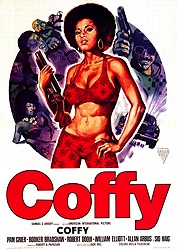 One of my favorite revenge movies of all time is getting its long-awaited U.S. Blu-ray release TODAY courtesy of Olive Films.

Here's the thing about Jack Hill's Coffy, my favorite blaxploitation film, my favorite Jack Hill film, one of my favorite revenge films and just one of my favorite films period: it is a brilliant movie. Since it first hit theaters in 1973, the film has been marginalized as something "lesser" because it falls under the larger category of exploitation. It's fun and violent and rightly made Pam Grier a household name, the academics say, but it's still a trashy little genre picture not deserving of "classic" status or much real scholarly examination. To this I call bullshit. Coffy is why we love movies.

I know that things have changed in recent years. The growth of the "internet critic" (a term often used as a pejorative) and the work done by scholars like Kim Newman have helped legitimize genre studies in a way that didn't exist 20 years ago. This means that for a lot of us, Coffy is finally being given its due as a Great American Film, one which documents a specific cultural period and place, which explodes with life and vitality and which tells a classical story with a few new twists. Yes, it's an exploitation film. And, like a few other exploitation films made in the '60s, '70s and '80s, it is also brilliant art. I love it so. 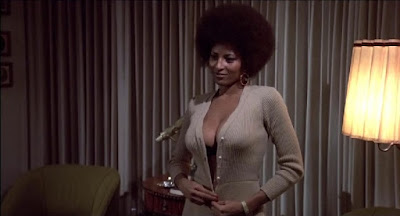 Pam Grier plays Coffy, a nurse by day and a badass vigilante by night. As the film opens, she's already on her one-woman rampage of revenge against the drug dealers and criminal underworld who got her kid sister hooked on smack. She poses as a junkie or as a woman looking for sex, then blows the scumbags away once their guard is down. She has a boyfriend, Howard (Brooker Bradshaw), who is a politician looking to run for Congress and who is unaware of her hobby of vigilantism. When Coffy's friend, a cop on the straight and narrow, is beaten up and put in the hospital, she doubles her efforts and goes after a pimp and a mob boss, but eventually discovers just how high the ladder of corruption climbs in her city.

A word about Pam Grier, who made a name for herself working in exploitation during the '70s (several times with Jack Hill) and experienced a career resurgence in 1997 when Quentin Tarantino cast her as the lead in Jackie Brown, in which she is completely wonderful. She's been great in a lot of movies, actually, but none of them moreso than Coffy. Here she is a towering figure -- an icon of badassery, of independence, of sexuality. I almost don't have the words.

There is sexy, and then there is Pam Grier in Coffy. She's at such a completely different level than her contemporaries of the time that it almost seems unfair to compare them. It's not just her physical beauty, either, even though that cannot be overstated. It is her confidence, her assertiveness. There is not a single moment in the film that Coffy -- and, by extension, Grier -- doesn't own 100%. When she picks up a shotgun and takes someone out at close range, she means it. When she pours champagne in her boyfriend's lap and goes down on him, it's hot not because of what she's doing but because of how she is controlling the situation. This is a character that is highly sexual but not in an aggressive or "damaged" way as we would normally see out of Hollywood. Think about it: most female characters who are as sexual as Coffy are using their bodies to manipulate men into doing their bidding. Not Coffy; she's sexual because she enjoys it and she's healthy. She attacks every aspect of life. When she's going to sleep with her boyfriend, she goes for it. When she's going to kill a bunch of people as revenge for her sister and her friend, she goes for it. 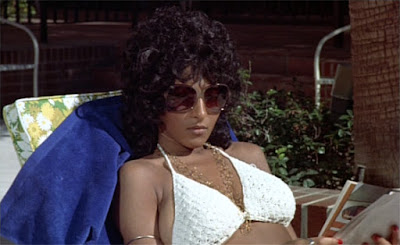 And go for it she does. One of the things I love so much about Coffy is that it does not back down from its mission; there are no scenes of moralizing, no moment at which Coffy realizes that revenge won't fulfill her or that killing is wrong. When Coffy points a gun at someone, you best believe she's going to pull the trigger. Movies have gotten so soft in the last 40 years that what Hill does in Coffy feels completely transgressive, almost dangerous. We never quite know exactly what's going to happen next, and it's thrilling. That's the adrenaline rush of a movie this alive.

One of the things we fans of exploitation love about these films -- what we're celebrating all month long with #Junesploitation -- is how they can cut to the quick of what we want out of movies. Yes, we want moving stories of the human experience and a depiction of the vast array of emotions we all feel. But we also want the visceral kick of a movie like Coffy -- a movie that grabs us by the stomach and the neck and won't let go for 90 minutes until Pam Grier gets everything she wants. Jack Hill knows how to plug right in to the pleasure centers of our movie brains and deliver a film that's all attitude and payoff, cutting away anything extraneous and leaving only the good stuff. Coffy has so much good stuff. 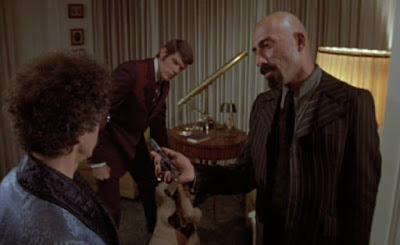 I haven't even mentioned Sid Haig! He was a regular fixture in Jack Hill's movies since working together on Spider Baby, Hill's first, and here plays one of many truly deplorable bad guys. His stunt casting in a lot of more contemporary films is directly because of his work in movies like Coffy and other Jack Hill collaborations. While he's slimy and effective and has a face with a ton of character to it -- he's a guy you remember -- his performance is overshadowed a bit by the powerhouse that is Pam Grier.

Still, I love that Hill includes so many kinds of villains in the movie. There is a mistrust of everyone from the street to the government that's indicitive of both the period and, if we're reading more into it, the black experience. Part of what makes Hill such a genius is that he's able to empathize with characters who have been marginalized, and he makes movies that force his audience to empathize with them as well. Take Switchblade Sisters, my second favorite of his work, for example. Plenty of movies had been made about teenage delinquents from the '50s through the '70s, the difference being that most of those saw the delinquents as the problem. Not Hill. When the cops come to break up the Jezebels (the film's girl gang), Hill sides with the gang. He directs like an outlaw. 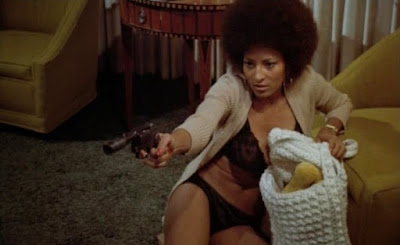 So while Coffy isn't a movie specifically about the black experience in1973, it's impossible to divorce the two. It is, in part, about how drugs invaded certain urban communities. It's funky and angry and cooler than cool. And now it's finally on Blu-ray! Though it has been available in the UK for some time -- first as a barebones disc and earlier this year in a package from Arrow Video with several bonus features, including a Jack Hill commentary and interviews with Hill and Pam Grier -- it's just the same lousy DVD that has been available to own in the US for the longest time. The Olive Films Blu-ray does not contain any special features, but at least we finally have Coffy in HD and I can retire my non-anamorphic MGM DVD.

Coffy isn't just a masterpiece of its genre; it's a great film in any genre. If you haven't seen it, make it a point to check it out at some point during #Junesploitation. Watch it for Revenge day today. Watch it for Blaxploitation day. Watch it for Icons day. Then watch it for the rest of your life, because once Coffy enters your life she's going to stay there. What a movie. I dig it the most.