The Overlook: Who's Minding the Mint?

An all-star comedy cast, a bunch of crazy circumstances, goofy ‘60s mayhem — Who's Minding the Mint?, if you were a lady, I would right-swipe you. Because apparently, that's a thing now.

Oh, the fond memories I have of watching this damn thing on “The Channel Seven 3:30 Movie” when I was growing up. The Chicago ABC affiliate would cram a feature film into a ninety-minute time slot—minus commercials—every weekday before the early news. I have seen Who's Minding the Mint? (well, a good three-quarters of it) hundreds of times. Yet these days it’s rarely shown, and the only DVD release available is through Warner Archive MOD. It’s as if no one even CARES anymore about mints, or who is minding them! 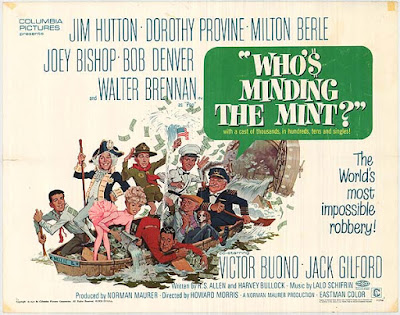 Hollywood released a slew of all-star-cast comedies the wake of 1963’s It's A Mad, Mad, Mad, Mad World, and like all of them, Who's Minding the Mint? suffers in comparison. WMM? shares cast members with the earlier IMMMMW: Milton Berle and Dorothy Provine appear and (virtually) reprise their earlier (better) supporting performances. WMM? even features an explicit IMMMMW moment when our protagonists make a discovery that, in attitude and musical underscoring, very much resembles the discovery of “the big W” in IMMMMW. Both movies seem to follow the logic that, if you crowd a caper comedy with enough funny supporting players, then something funny will come out of it.

It’s interesting that so many of these epic comedies explore greed and the extreme lengths to which the characters will go to receive untold riches. This is a good thing; I find characters acting out of blind greed as their sole motivation to be fertile ground for comedy. Has anyone else noticed that the characters are almost never allowed to keep the money at the end?

The Plot in Brief: After he accidently destroys $50,000 in new hundred dollar bills (whoopsies!), treasury employee Harry Lucas (Jim Hutton) hatches a plan to replace the missing money. The simplest thing, Harry reasons, would be to break into the mint after hours and print $50,000 in new bills. 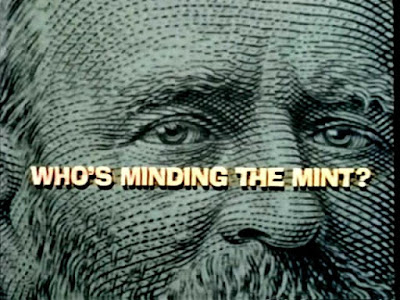 The film's opening credits sequence is terrific: the text is laid over beautiful images of paper currency while Lalo Schifrin's score energetically hums along underneath. Actually “hums” might be the wrong word. It’s one of those quintessentially 1960s movie songs that doesn’t have actual lyrics—just a chorus of impossibly cheerful white-bread voices scatting “baaaa, da ba da ba, ba baaa, ba da beee da,” while an occasional trombone reminds us that this is going to be a comedy. It sounds kind of like a less-sexy version of the theme from Stanley Kubrick's Lolita. The bills on display go all the way up to the (now out-of-circulation) $100,000 bill. The millions of dollars on display remind me of the famous David Mamet quote, “Everybody loves money. That's why they call it money.” 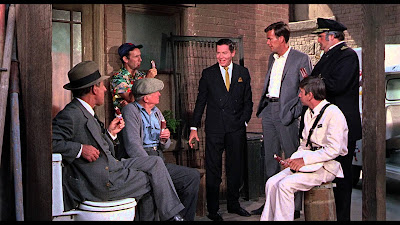 WMM? boasts a deep bench of entertaining character actors: Milton Berle (whose shtick during the robbery is a hoot), Jack Gilford, Jackie Joseph (from the original Little Shop of Horrors), Victor Buono (best known as “King Tut” on the 1960s Batman television series), and even a young Jamie Farr. For all intents and purposes, these guys are the whole show. The movie’s main protagonist is actually Jim Hutton, of course; but for some reason he plays his role as a joyless exercise. I realize that he’s stuck being the straight man, but this sour performance has “phoning it in” written all over it.

Still, the movie's main problem is too much sodden exposition. It takes nearly an hour to establish the premise; but after that happens, it’s like the director flips a switch. Once we get to the robbery sequence, the film's sense of comic invention, which up to this point has lain dormant, springs to life. The screenwriters seem to have saved up all of their comic invention for the finale. 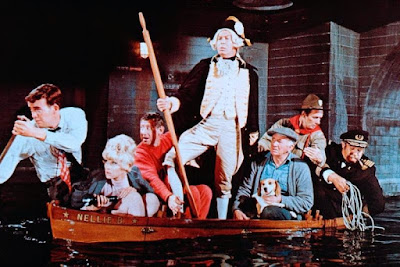 The robbery is this film’s Big Finish That Brings the Whole Cast Together (these movies always have a BFTBWCT) and all of our criminals show up in crazy outfits: George Washington, a ballerina, a boy scout, etc. Pop’s dog is about to have her pups, the team’s sewer boat sinks, ink sprays everywhere. These and other comic complications shake the film awake from its first half coma and make for a rousing finale.

Babies, if you like IMMMMW, or madcap heist comedies, or 1960s movies crammed with lots of stars, then you should check out WMM? And if you don’t like all of those things, then I don’t even know who you are anymore. Baaa, ba da ba da baaa!

Who's Minding the Mint? is currently available as a MOD DVD title from Warner Archive.

Email ThisBlogThis!Share to TwitterShare to FacebookShare to Pinterest
Labels: 1960s movies, heist movies, it's a mad mad mad mad world, the overlook, who's minding the mint