Howdy, friend! Sit for a spell, then saddle up with Budd Boetticher and Randolph Scott for the second film in the acclaimed Ranown Cycle.

In 1957, just eight months after the first collaboration between Budd Boetticher and Randolph Scott, Seven Men From Now, the same team came together once again to create The Tall T. Scott starred in the film, but he also co-produced it with Harry Joe Brown. It’s their collaboration that gives these films in the cycle their name (RAN for Randolph, OWN for Brown). Screenwriter Burt Kennedy based his script on a short story written by Elmore Leonard, and the American-turned-Mexican-bullfighter Budd Boetticher returned to the director’s chair.

The Tall T takes its name from a ranch that we see at the beginning of the film, Tenvoorde ranch, which serves as the jumping off point for our story. The ranch is operated by a man and his young son, who Scott comes to visit. The film begins with an innocent tone; the first 20 minutes or so seem to be taking us nowhere at all as Scott goes into town, has conversations with various folks, and even tries to break an angry bull. It makes the audience wonder where it’s going, what the movie is about, and why we’re spending so much time covering things that seem to have nothing to do with the story. 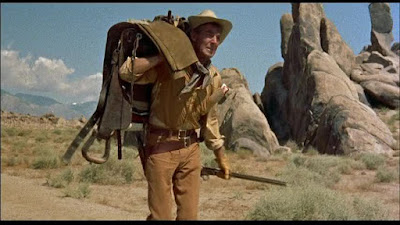 It doesn’t take long for the movie to establish the setting before it quickly takes off like a runaway stagecoach. While Scott has been in town, some nasty outlaws have moved in on the Tenvoorde ranch and taken the man and his son as captives. Before long, Scott ends up being taken as a hostage, along with a newly-married couple that happened to be in the wrong place at the wrong time. What follows is really tense chamber drama, only the chamber is the western desert instead of a movie set on a studio stage.

Because Scott’s character wasn’t captured alone, we get three distinct reactions and personalities as the story unfolds. The newlywed husband is slickly played by John Hubbard (The Mummy’s Tomb), who thinks he can talk his way out of the crisis. His wife is played by Maureen O’Sullivan, who played Jane in the early (and best) Tarzan movies from MGM, opposite Johnny Weissmuller. O’Sullivan was 45 at the time and considered to be too old for this kind of a leading role, and The Tall T finds her on her way down the ladder of fame. It makes it clear that she’s considered to be over-the-hill and plain to look at, but it also spends the better part of the running time subverting our expectations about her character and showing us an unexpected strength and practicality. Also making an appearance in the film is western-stalwart Arthur Hunnicut. If you don’t recognize the name, you’re sure to recognize the face.

Our outlaws are just as interesting as their captives, and are led by stone-faced Richard Boone, who plays a crook in possession of a warped sense of honor and dignity. His two henchmen are the homicidal Chink, played by a young Henry Silva (The Manchurian Candidate and the Steven Seagal film Above the Law) and Billy Jack, played by Skip Homeier, who I know mostly from a couple of classic Star Trek episodes. 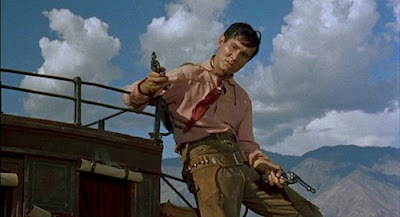 Before long, we’ve forgotten all about the stuff that happened before our characters were taken hostage. The tension builds and the violence escalates as the story moves not outward, but inward. The Tall T is unconcerned with western myth-making, and instead puts a magnifying glass on the human condition and how people react under pressure. The story could just as easily take place in an urban landscape, or at sea. The setting has very little to do with the actual story being told. This is a story about people.

Just as with Seven Men from Now, the movie was filmed among the smooth, round rocks of Lone Pines, California, though the landscape seems to have a different feel in this film than it did in the one that came eight months earlier. Boetticher certainly knew how to capture beauty, and cinematographer Charles Lawton, Jr. captures that beauty and the harshness of the desert while framing his subjects with interesting shot compositions. The Tall T may be a low-budget B-movie, but the production value is through the roof. Also, because there’s such a weighty, human story, it’s easy to forget the limitations it was created under.

My DVD copy of the film has a special video feature with Martin Scorsese, in which he discusses how this, as well as the other Boetticher films of the Ranown Cycle, influenced his tastes. He highlights the ideas hidden within the film, and reveals the depth of the story and what was actually going on. Scorsese has long been a champion of the B-film for the way it can sneak huge ideas into unsuspecting packages, and he does the same here. 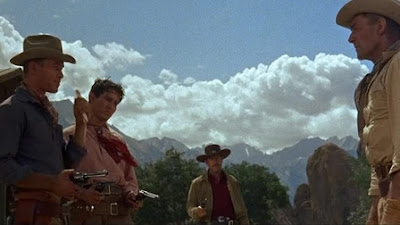 The Tall T was released in a box set from Columbia back in 2008. The set also contained the other films from the Ranown Cycle (excluding Seven Men from Now), but has since fallen out of print, meaning that getting your hands on that set is going to be a very expensive proposition and would cost you a minimum of a hundred dollars. Good news! Mill Creek has just announced that they will be reissuing all five of the Randolph Scott films from that set as well as sixth film that predates Boetticher’s work (The Lawless Street from 1955, co-starring Angela Lansbury) in a collection called “The Randolph Scott Round-Up.” The six films will be divided between two DVDs, which shouldn’t be too much of an issue when you consider that all of these movies run under 80 minutes each. The best part is that the collection retails for $14.98. If you’re at all interested in the Ranown Cycle, I encourage you to pick up the set to show support for these fantastic movies that are quickly slipping away. I own the Columbia set, but I’ll be double-dipping on the Mill Creek set to send a message that there is definitely still an audience for these wonderful films