Let’s take a look at a very important (and very nerdy) aspect of movie fandom.

As long as movies have been around, books have served as an inspiration for the stories of filmmakers of the silver screen. If you really sit and think about it, it seems like most of our classic movies (from Gone with the Wind to The Godfather to Goodfellas) are based on books. Books have always fired the imaginations of storytellers, so it makes total sense for those storytellers to want to convey those tales in a visual format. It’s a totally different (and kind of insane) thing to take the massive scope that a movie allows and condense all those thoughts, images, narratives and intangibles into a book. I don’t know why you’d even want to try, because it doesn’t seem like it should work at all, but a lot of times, it does. I’m really glad movie novelizations exist.

The golden age for movie adaptation novels seemed to be during the ‘70s and ‘80s. A trip to the newsstand then would have revealed multiple bestsellers based on the highest-grossing films in theaters. A trip to your local thrift store now will likely reveal dozens of books based on the blockbusters of the past. In the days before home video and DVD, this was the only way to prolong the magic of experiencing your favorite movies in the theater, and these books sold in the millions. They served a purpose, and allowed the magic to continue after the movie lights had faded. 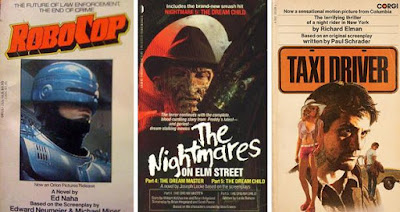 I suppose the question needs to be asked, “Why read a book based on a movie?” Obviously, the movie itself is going to be the best, purest experience of what the filmmaker is trying to convey. Why take six or eight hours of your life to read the same story you can get from a movie in two? Also, you’d think a novelization would or could never surpass the movie on which it’s based; nevertheless, it happens. A lot. As someone with a lot of affection for the form, there are multiple reasons that I enjoy reading movie novelizations in addition to prolonging the magic.

First, movie novelizations are often more fleshed out than the movies. Because movies generally adhere to a two hour or two-and-a-half hour running time (unless they’re directed by Kevin Costner), they only have a limited window in which to tell their story. Books, on the other hand, have as many pages as is necessary. While we thankfully don’t have a 900-page book based on Cannonball Run (actually, that sounds awesome), the stories in movie novelizations are almost ALWAYS longer and more detailed than their cinematic counterparts. They offer us an opportunity to get inside the heads of some of our characters and can reveal nuances that don’t come out on the screen. An actor’s performance is subject to a bunch of different factors, but the page bypasses a performance and goes straight to the character.

Also, many novelizations are written from early drafts of the script. It takes a long time to write a book, so authors have months and months to work on them, usually while the movies are still being filmed. This almost always results in novels that have scenes and dialog that were cut from the theatrical film. The various Star Wars books were just crammed with stuff that never made it into the movies. In The Phantom Menace novelization, there’s a scene that isn’t in the movie where Anakin crashes his podracer and spends the night with an injured Tusken Raider to make sure the Tusken survives. This has a ton of implications for what happens between Anakin and the Tuskens in the next movie. Also, the author (Terry Brooks) spent a lot of time with George Lucas and had gigantic swaths of the Star Wars universe explained by the maker himself, including the background of the Sith and their conflict with the Jedi, which the author drew from and alluded to in the book. As far as I know, it’s the most extensive history George Lucas has ever given anyone about the subject, and the only place that knowledge can be discovered is through the books.

The book based on Steven Spielberg’s E.T. is packed with details not found in the movie. It allows us to experience at least some of the story through E.T.’s eyes, and we learn that he’s been alive for millions and millions of years. The book for Star Trek: The Motion Picture is widely recognized as being far superior to the movie and for being filled with so many details and deviations that it changes—for the better—how you watch the film. The novelizations for Rambo: First Blood Part II and Rambo III were actually written by David Morrell, the author who created the character in his book First Blood. While the movies themselves are limited (though I still love them), David Morrell’s books put the writer back in charge of his creation, which is really unique. In the case of Rambo: First Blood: Part II, the book features sequences from an early draft of the screenplay by James Cameron that were never filmed. I can’t think of many other opportunities for a creator to revisit his character in such a strange, odd way.

I’ve been a big fan of novelizations since I was a kid. I would ride my bike down to a local used bookstore that was really just a hole in the wall, and I could trade two of my old books for one of their new-to-me books. I spent my summers poring over the novelizations of movies I wouldn’t see for years and years, and visualizing what the scenes in the films would be like. When I finally did see those movies, the stories in the books I read almost always outshone the films because of the descriptions on the page and the fact that I was experiencing the action through my own imagination. Santa Claus: The Movie? Not a great flick, but an awesome book. You can see two more of my favorite novelizations in the picture that accompanies every single “Heath Holland On…” that I write. To this day, I consider movie novelizations to be a really important part of my film fandom. It let’s me dig even deeper into movies that I love, and it provides that extra layer of awesome when I just can’t get a movie off my mind.

They still make movie novelizations, but they’ve gotten a little harder to find. I don’t think they sell nearly as many copies as they used to, but you can still locate books adapted from some of the biggest films each year. 2014’s Godzilla got a novelization, and so did Interstellar and even Need for Speed. The junior novelization of the Disney film Frozen was a #1 New York Times Bestseller. In fact, it seems like junior novelizations (books for kids) have become the future of what we’re talking about here; the books for adults seem to have curtailed over the years, but they’re still cranking them out for kids. The book adaptation for Star Wars: The Force Awakens was announced months ago, and I’m anticipating that like Tom Hanks in Castaway anticipated a trip to a Golden Corral buffet.

Am I on my own here? Does anyone else have a love for movie adaptations like I do? Let me know, and shout out your favorites if you do!
Posted by Patrick Bromley at 12:00 PM