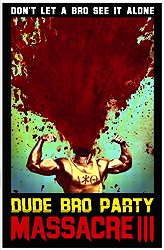 The title says it all.

When a movie is called Dude Bro Party Massacre III and you know there have not been two previous Dude Bro Party movies, you know one of two things: either you need to see this movie as soon as possible or it is not for you. It is the first movie from 5 Second Films (5SF), a comedy site and collective of actors and filmmakers who have been posting short videos online since the mid-2000s but are finally branching out into features. It is gory and ridiculous and absolutely recommended for fans of '80s horror or absurdist comedy. It's even better if you're a fan of both. 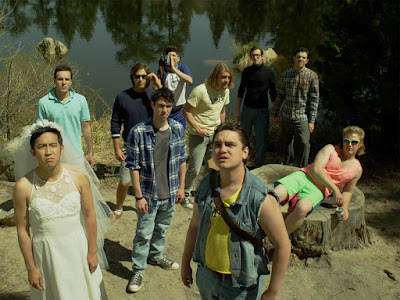 The conceit of the film is that it's the second sequel to an '80s slasher called Dude Bro Party and that the only remaining copy left in the world exists because a kid taped it off of TV in the '80s, when it aired as the "Midnight Morning Movie." That means there are tracking marks, title cards where the commercials would go and quick glimpses of fake '80s commercials sprinkled throughout, my favorite being a clip of a Ghoulies-style horror movie called Pizza Goblins. The film is framed in 1.33 full screen and has the look of degraded VHS, so you can't accuse the filmmakers of not committing to the bit.

The opening moments get everything right, as Brock (Alec Owen, also a co-writer), the survivor of the first two Dude Bro Party Massacres, recounts the events of those two movies to his therapist: a crazy house mother slaughtered the members of the Delta Bi fraternity but was stopped and killed. In the sequel, another killer cut off the skin of the house mother's face and put it on as she continued to carry out the murders now known as "Motherface." His story is accompanied by clips of all the murders from those nonexistent entries. Fans of the Friday the 13th franchise will recognize this particular trope, and Joey Scoma (who directed the opening montage and the fake commercials) gets the choice of moments and the timing just right, minus one gratuitous Larry King cameo. Then Brock is murdered -- another detail this fake sequel gets right -- and the story switches to his twin brother Brent (also Owen), who decides to rush Delta Bi as a way of investigating his brother's murder. His arrival in the frat just happens to coincide with the return of Motherface, and before long the Dude Bros are being picked off one by one in gory, graphic detail. The '80s! 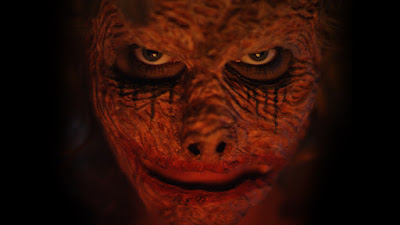 Horror parodies are a tricky thing to pull off, even more than horror comedies -- not only do they have to work making fun of the thing they're mocking, but also have to be funny independently of that thing. That's why there are so few good ones; for every Student Bodies, there are five Scary Movies. For every The Editor (the Italian horror parody from Astron-6 that's way, way inside; it's out on Blu-ray in September from Scream Factory), there's A Haunted House and Vampires Suck and Shriek if You Know What I Did Last Friday the 13th. The good news is that Dude Bro Party Massacre III belongs firmly in the "good" class of horror parodies -- it's a loving tribute to '80s slashers, a takedown of bro culture and a genuinely funny absurdist comedy in its own right. Though there's not much of a political point made by inverting the gender of the victims, doing so at least ensures that we're able to laugh. We've seen enough women victimized on film that it would be tough to make funny with all the same signifiers in place. Nobody feels bad about watching a bunch of frat guys get it.

Originally conceived as an online short  in 2009, Dude Bro Party Massacre III was expanded into a trailer and, after a successful Kickstarter campaign that raised over $200,000, eventually a feature film. It absolutely has the feel of a movie written and directed by a sketch comedy troupe, much like the early films of The State or Broken Lizard. The cast members have that kind of timing and rhythm with one another, and even when the jokes aren't working it's obvious that they're making each other laugh. There are indulgences that never really pay off, like a "bag of oranges" joke that goes on and on and builds to a payoff that's insane but never quite funny, but there are enough jokes that work along the way that misses can easily be overlooked. That's the kind of movie it is: not consistently hilarious, but with enough laughs to sustain itself. 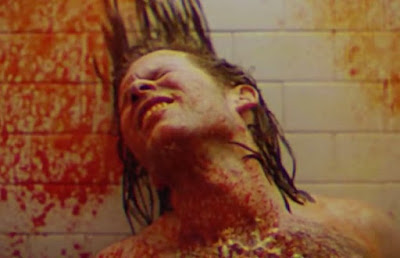 The VHS aesthetic mostly works, though directors Tomm Jacobsen, Michael Rousselet and Jon Salman are quick to break it for the purposes of a gag. That's the danger when a film is stylistically tied so specifically to a certain period -- the slightest derivation in the special effects, the aesthetic or the references becomes immediately apparent and breaks the spell (Robert Rodriguez's Planet Terror is further evidence of this phenomenon). Though the main cast are mostly unknowns, there are appearances by Patton Oswalt, John Francis Daley, adult film star Nina Hartley and Andrew W.K. (playing a character named Rip Stick), plus a bigger role played by Greg Sestero of The Room. There are definitely air quotes around a lot of the film -- hell, the whole thing is practically air quotes. But it's not a movie born out of hipster irony, because everyone involved so clearly loves the thing they are attempting to slavishly recreate. And despite the insane practical gore effects -- including several truly inspired gags -- and the pitch-black darkness of some late-movie humor, Dude Bro Party Massacre III feels completely good-natured. It's a party movie. A Dude Bro Party movie. Just ask Rip Stick.