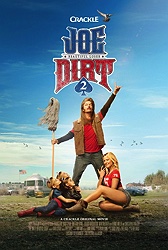 It's the movie you always knew you never wanted.

There's little chance that even with the backing of Adam Sandler's inexplicably popular Happy Madison Films (the production company responsible for most of the worst comedies you've seen in the last 10 years) any major studio would bankroll a starring vehicle for David Spade. Though he headlined a handful of movies in the 2000s -- mostly forgotten efforts like Lost & Found and Dickie Roberts: Former Child Star -- Spade's best days at the box office appear to be behind him (which is to say they never really existed, as he never had a big hit that didn't also star Chris Farley or Sandler). Yet somehow, one of his films, the 2001 comedy Joe Dirt has found some traction, either because it spent many years in weekly rotation on Comedy Central or because Spade himself has been doing various odds and ends chores for executives for a decade. The movie has enough of a following that Spade was able to get a sequel, Joe Dirt 2: Beautiful Loser, greenlighted 14 years after the original made little impact.

Because there isn't a huge demand for the return of Spade's mop-wielding, mullet-headed redneck character on movie screens across the country, the sequel was produced and is being distributed by the comedy site Crackle.com, where it is available to stream for free beginning July 16. The platform is fitting, actually, as Joe Dirt 2 feels like one of the first feature films shot and edited like a YouTube video. 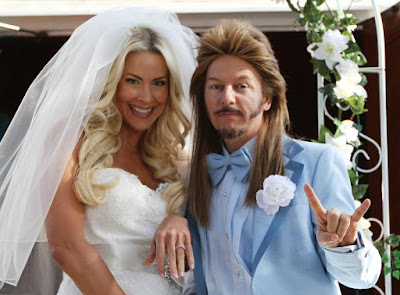 David Spade returns as Joe Dirt, former janitor who is now married to his sweetheart Brandy (Brittany Daniel). They live in a trailer park and have three cute daughters. Joe gets a job as a lumberjack, but all the other lumberjacks pick on him and fart in his face, including one played by supermodel Charlotte McKinney in super short shorts and a top from which she is spilling out, because this is a Sandler production and even the farting female lumberjack has to be slutty and fuckable. His family sees the lumberjacks picking on him and Joe is sent into a shame spiral, feeling like a loser to whom his children cannot look up. Then there's a tornado or some shit and Joe is sent back to 1965, where he meets Brandy's mom and the father of a guy who bullies him played by Mark McGrath, because this is a Sandler production and at least one major role has to be filled by a non-actor. He also runs afoul of the Hell's Angels, led by Patrick Warburton. He gets stranded on an island for years because Cast Away is a thing (only here he has SEX with Wilson the volleyball because this is a Sandler production and you wish you were never born) and returns to society in the '70s, so we get to see Joe Dirt interact with a few different decades. Maybe this is something you have longed for. Please avoid making eye contact with me if that's the case.

Speaking of hilarious references, the movie opens with an extended reference to Forrest Gump in which Joe Dirt tells his story to a lady on a park bench (and because the filmmakers are afraid you might not get the reference, one of the characters calls attention to it because the only thing funnier than making a reference is explaining the reference you are making). Then JD begins to tell his story and there's an homage to the opening credits of The Sopranos. No joke, of course, but just seeing David Spade wearing a mullet wig instead of James Gandolfini is the recipe for hilariousness. So we've got a sequel to a movie that's 15 years old referencing pop culture that's anywhere to from 16-20 years out of date. Joe helps write "Free Bird" for a young (and square-looking) Lynyrd Skynyrd, which is clever and funny because it's the same as Marty McFly writing "Johnny B. Good" in Back to the Future 30 years ago. There are also references to Silence of the Lambs and The Wizard of Oz and Deliverance and It's a Wonderful Life, so the jokes do get much more out of date. You know, in case you were worried. 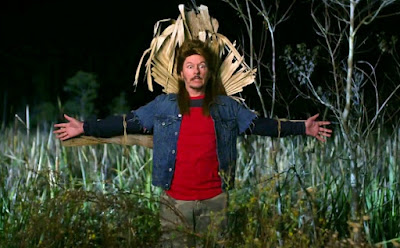 Maybe it's not fair to lay the blame for several of the film's offenses at the feet of Sandler and his Happy Madison Productions, but it's hard not to when Joe Dirt 2 bears so many of the hallmarks of those movies: the classic rock on the soundtrack, the way characters constantly laugh at things the others say so we know it's supposed to be funny, the total disinterest in cinematic form. The portrayal of women in these films is particularly troubling, as it can typically be broken down to 1) actress who deserves better playing the lead love interest; 2) woman who is the butt of jokes because she is old/large/not fuckable and 3) women who dress and are photographed like strippers and pin-ups. It's really disturbing in something like Grown Ups, when these women are the young daughters of a major character and the big joke is that everyone else wants to fuck them.

Joe Dirt 2 is not the movie that breaks the trend. Brittany Daniels gets to occupy two spots, actually, as the love interest who also is dressed like a stripper; that she is sweet and likable in the role at least helps create a character that is more than the sum of her skimpy wardrobe. Even the doctor delivering Joe Dirt's daughters has to be a hot young woman in a tight, cleavage-revealing dress -- and, what the hell while we're at it let's hint at a lesbian kiss between her and another young hot nurse. Oh, and this is all framed from the POV of hot Brittany Daniel's vagina, which the filmmakers also must call attention to. They might as well get out a telestrator and circle everything we're supposed to find "funny." If they were this afraid of us missing the jokes, they should have taken the time to write some. 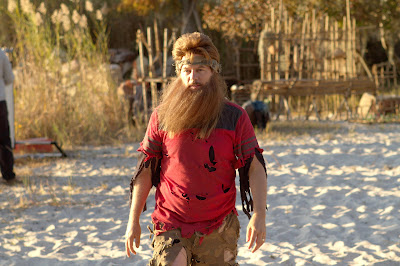 The film is co-written and directed by Fred Wolf, a former writer for Saturday Night Live and a regular in Sandler circles, having written or co-written both Grown Ups movies and many of Spade's previous films. This is his third feature as a director, a career for which he still shows little talent. His first movie, 2008's Strange Wilderness, was borderline incompetent but made up for it with lunatic anarchy. His follow-up, The House Bunny, is the kind of totally unremarkable effort that shows up on TBS ten times a year and is made palatable by its cast. Joe Dirt 2 is easily the worst of his films, so sloppily constructed that it makes Dennis Dugan look like the real stylist at Happy Madison. Except for a few shots in which the camera is mounted on a crane, Wolf is happy to lock it down and have the actors seemingly ad-lib in front of it, walking in and out of frame as necessary. The filmmaking is as lazy as the writing. I'd call it one of the most poorly-made features to play theaters in 2015, only it isn't playing theaters.

And maybe that's the problem. Maybe the artlessness of Joe Dirt is more a function of budgetary limitations than anything else, because maybe Crackle.com just couldn't put up the money for Wolf to make the movie the way he wanted to. Maybe it feels like it was improvised over the course of a weekend because it was. Maybe. I have no idea what the production of the film was like. Ultimately, all that matters is what ends up on screen. One might think that the only way a Joe Dirt 2 gets made is if those involved with the original want so badly to come back that they'll practically will it into existence. Poorly made and unfunny as it may be, it should be a labor of love. Instead, it feels like everyone can't be bothered to do more than the bare minimum.