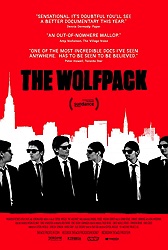 A fascinating subject gets cursory treatment.

The Wolfpack could have been an amazing documentary in the same vein as Crumb, but disappointingly is a missed opportunity. The movie tells the story of the Angulo brothers, who are locked away from society inside a New York apartment by their strict and fearful parents. What the brothers learned about the world they accrued through the movies they watched on video and DVD. Not only that, they also put on their own amateur re-enactments of the movies they love (which include Reservoir Dogs, Pulp Fiction and The Dark Knight) complete with props and costumes. As the boys grow into men, they seek more interaction with the outside world.

The documentary is a bit muddled and a bait and switch, really, as you are introduced to the Angulos through the film re-enactments (which are impressive in their passion and detail) and then you suddenly realize this is a sad movie about child abuse. Shockingly, director Crystal Moselle doesn’t seem to have a point of view on the abuse but rather seems content documenting the shut-ins without judgment. In a case like this, that is cowardly and unacceptable. It reminded me of Beasts of the Southern Wild, where we got this sort of derelict chic fantasy of real-world abuse of children based on their living situations of squalor. The Wolfpack doesn’t do this to the degree of Beasts, but it does amaze me that the filmmaker can sit back and choose to bear witness to this ugly situation without a gut reaction of disgust. We never get the sense, cinematically, of where Moselle is coming at this material from and that is the movie’s fatal flaw. 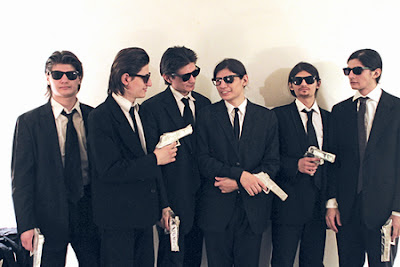 The Wolfpack is not a total waste, as it does have many redeeming elements. The Angulos are surprisingly personable and nice young men, filled with personality and love for one another. I wish them the best from the bottom of my heart and would love to hear a “where are they now” in a few years with my fingers crossed for them. We want to see good happen to them and their moments of happiness -- including an outing outside to see David O’ Russell’s The Fighter or an excursion to Coney Island -- are rewarding, albeit short-lived. It’s cliché to say that a movie depicts the triumph of the human spirit, but that could be said of the boys in The Wolfpack. Movies can sometimes fill in holes in your life and that’s been important to the Angulos, who without them might be feral “wild children” with no socialization skills whatsoever. We get to really know the Angulos for better and for worse, the worse part being their creepy parents who are confused at best and despicable at worst. Anyone can be a parent, this movie indirectly reminds you, and that prospect is very frightening. The movie’s approach of just throwing you into the Angulos' situation works because it allows you to understand what it’s like to live their lifestyle (it’s suffocating and depressing).

The Wolfpack on the whole does not work. There is a lot being left out. In a telling scene, one of the brothers says that he offers nothing of insight to his court-ordered therapist and I feel like, at times, the brothers are taking the same approach with filmmaker Moselle – only allowing her in so much but not all the way. It seems like there is always more bubbling underneath what is presented just waiting to be probed by a more curious filmmaker. In the end, the movie (which meanders greatly in the second half) doesn’t add up to much. Too many docs have filmmakers that are not up to par with the material they are tackling. It’s getting to be a real problem within the genre. The larger question this movie raised for me is what is the function of a human interest documentary? When is it simply exploitation of a family or subject? Does the filmmaker have the obligation to “blow the whistle” when they see wrong being done to their subjects? 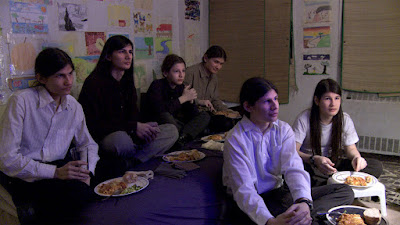 I’m not sure what the intent is with The Wolfpack. Is it to show that a lifestyle of being a shut-in is a bad idea? Is it to show that art can save people who are imprisoned? There’s a quote I heard that goes “We live in a box of space and time. Movies are windows in its walls.” In the case of the Angulos, no statement could be truer. I want these boys to be ok. That’s more important to me than if The Wolfpack is a good movie. Which it’s not.