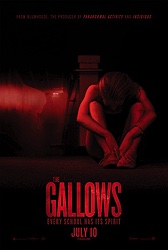 I didn’t hate this movie but I’m also not recommending it.

The Gallows is not the worst, but it’s completely ordinary found footage nonsense that exists to make a small chunk of money for the weekend it’s out before disappearing forever from the collective conscience of society. Every once in a while you get a horror surprise in theaters (Unfriended comes to mind) but The Gallows is too dumb for its own good. On the positive side, the movie is diverting, a little bit fun and tense at times, with a neat setting and the twist is crazy and interesting even if it doesn’t make any sense whatsoever and is completely dependent on fate guiding circumstance. The filmmakers, writer-directors Travis Cluff and Chris Lofing (anyone could have directed this movie -- there’s no authorship, mood or style) have little respect for the audience’s intelligence and that’s The Gallows’ fatal flaw. The plot doesn’t hold water if you think about it for even a few seconds.

I’m usually not the toughest critic either when it comes to found footage. I’ve liked many horror movies using this conceit, including The Blair Witch Project, Cloverfield, Afflicted, Quarantine and As Above/So Below. But with The Gallows, the filmmakers do themselves a disservice by even going the found footage route. This movie could have easily been a traditionally-shot teen slasher but (I’m assuming to cut costs) Cluff and Lofing went with found footage and the result is a mess, especially when it comes to story, logic and photography (no one can hold the camera still in found footage movies but that’s especially true of The Gallows). Found footage has become very tired through its shallow use and overall misuse. 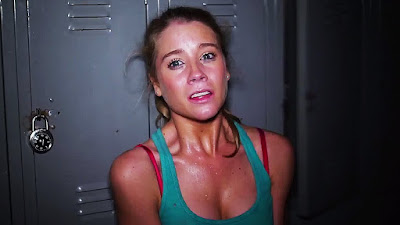 The plot in brief: 20 years after the accidental hanging of a high school student during a production of the school play “The Gallows,” the same school decides to remount the play with grisly results.

The characters are a major problem with The Gallows. There are four main leads we follow and three of them are forgettable…fine, whatever. But the one we follow (who is holding the camera) for at least the first half of the movie is among the most annoying, unlikeable teenagers to ever be put on screen. He’s the worst and I understand it’s to a point (we’re supposed to take satisfaction in his probable demise) but he drags down the entire movie. It’s way worse than T.J. Miller in Cloverfield.

Once that character leaves (I’m not saying if he does or doesn’t die so it’s not a spoiler), we end up missing him. Why? Because at least he was holding the camera with a sense of direction and purpose. The last 40 minutes of The Gallows are a convoluted mess because it feels like the filmmakers just let the cameramen (or cast) wander around shooting anything regardless of its sense of composition or significance. As a result, the energy sags and, until the loony finale, the movie gets rather boring. 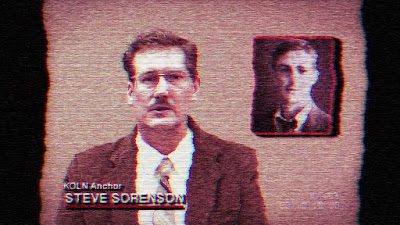 The Gallows is yet another in the ever-growing list of horror titles coming out of the ubiquitous Blumhouse Productions, who sometimes surprise with something good like Insidious and the aforementioned Unfriended. But more often, from Paranormal Activity to The Purge to Sinister (The Gallows tries to make a new slasher character similar to how Sinister gave us Bagul), they put out cheaply made, generic, nihilistic horror and The Gallows is no different. Their model annoys me.

If you’re a completist and need to see every middle-of-the-road found footage movie where a vengeful ghost comes back to settle the score, then go see The Gallows. Otherwise you’re not missing anything if you skip this movie. While not without its minor perks, it’s a lazy and stupid movie on the whole. I wasn’t expecting much and I didn’t get much. When people talk about how found footage gives horror a bad name, it is movies like The Gallows to which they are referring.
Posted by Patrick Bromley at 5:00 AM