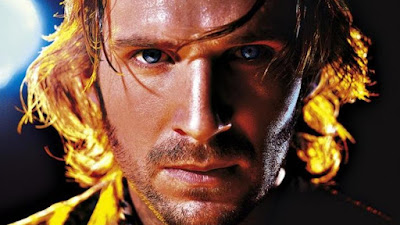 Who wants to stay up all night with me and watch movies about how our phones want to kill us?

Back in March, I ran a series of hypothetical 24-hour movie marathons in which I planned a full day's worth of movies built around themes suggested by you loyal readers. These aren't marathons I intend to actually sit through, but if I was going to program one around the theme submitted, this is what I would want to watch. I said at the time I might bring the feature back every once in a while. I wasn't lying! Here's another one. Don't read it on your computer or your phone or your tablet. Those things are out to get you.

The theme this time -- originally "computers," which I tweaked a little bit to a more "technology gone bad," -- was suggested on Twitter by Mikko Viinikka. Thanks, Mikko! 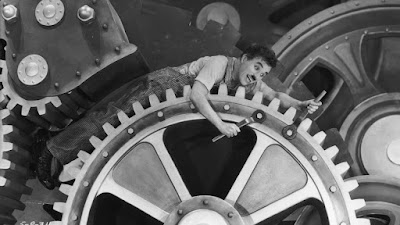 Though it predates computers, Charlie Chaplin's classic comedy about industry and technological dread seems like the perfect place to start a marathon like this. It's fun to program at least one silent film, but it usually needs to be scheduled first when you're at your most alert. There's no real point in my attempting to explain why this is a classic, so I'll just say that it sets the exact right tone for the rest of the marathon -- we should not blindly trust "progress." This Chuck Chaplin guy is on to something. Keep your eye on him. 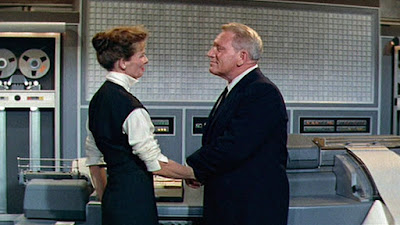 I think this is the only movie in the whole 24-hour marathon I've never seen. Spencer Tracy and Katherine Hepburn play love interests at a network where she's employed and is being possibly replaced by a super computer that Tracy has been hired to oversee. I'm eager to see this one as much for the always-pleasant chemistry between the stars as I am to see what kinds of computer anxieties Hollywood was exhibiting back in the 1950s. 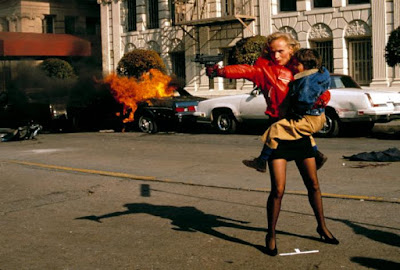 Really decent Terminator ripoff starring Gregory Hines as a cop trying to stop a female robot (Renée Soutendijk) with the help of her inventor (also played by Soutendijk). The robot -- which just happens to be a walking nuclear weapon -- is damaged and accesses traumatic memories of its creator, sending it on a killing spree of lecherous men. Countless movies have been made about A.I. gone wrong; in a case like this it's just about picking the ones you feel like watching again. After sitting through a couple of classics, trash like this makes for a great palette cleanser. Plus Gregory Hines is really good in it, because he was always good in everything. He was a real deal movie star who elevated every film in which he appeared. 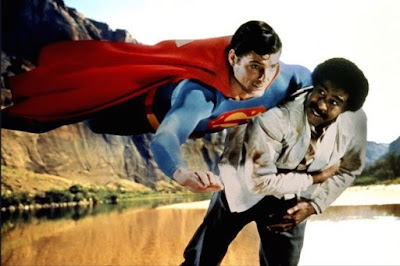 This truly terrible superhero sequel fits the theme in more ways than one. Richard Pryor plays a computer programmer who comes up with an embezzlement scheme (used again in Office Space) that inspires Robert Vaughn to attempt global domination. See how dangerous computers are? The really scary shit comes when Vaughn builds a supercomputer that becomes self aware and turns a lady into a cyborg in one of the single most traumatizing moments of my movie-watching childhood. I haven't seen this one in years; I'm sure it's still terrible, but it might be fun in the context of a marathon. 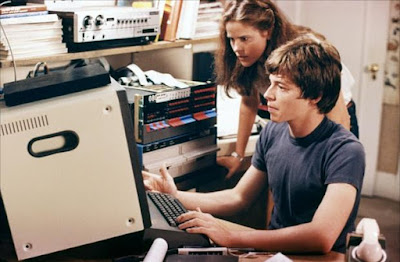 From the same year as Superman III comes a much, MUCH better computer movie. The premise is still far-fetched -- Matthew Broderick's teenage hacker accidentally triggers World War III by messing around with his computer -- but it's done with intelligence and heart and a great supporting cast that includes Ally Sheedy (never, ever more appealing), Dabney Coleman and Barry Corbin. John Badham -- who replaced Martin Brest after he was fired after two weeks of filming -- approaches the material with a sense of curiosity and wonder, creating a fun adventure film out of some pretty dark stuff. Sad that there are rarely movies like this anymore, presumably aimed at teens but intelligent and universal enough to appeal to everyone. Arthur Rubinstein's score is really underrated. 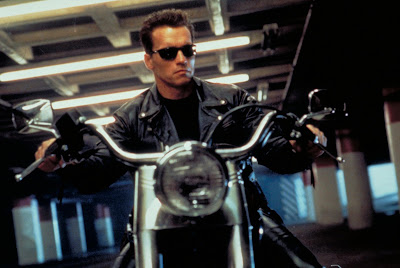 Listen. LISTEN. I know it's an obvious pick. But how can I program a marathon celebrating cinematic depictions of the dangers of technology without the granddaddy of them all? Artificial intelligence becomes self aware and wages war with all of humanity, necessitating time travel to put a stop to it! I love, love this movie, and while I love the first Terminator even more, the sequel has all the Skynet material that makes it more appropriate for the theme. I typically try to program a big, mainstream crowdpleaser in this slot (even when the "crowd" consists of just me), and boy does this one fit the bill. 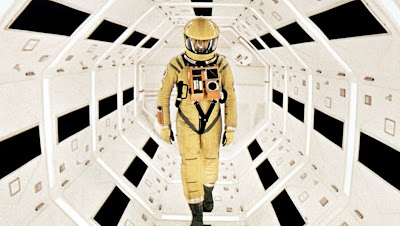 I know it seems like I'm making some easy choices here, but programming these marathons is sometimes about striking a balance between movies I feel like I have to include and movies I want to include. 2001 is both. HAL is maybe the all-time great computer gone bad and has to be represented. I'm deliberately showing this one late because it needs to be experienced in a dream state. 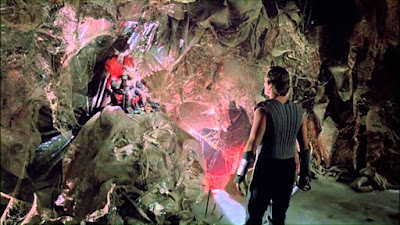 I always like to get weird overnight, and while this sci-fi fantasy anthology film only tangentially relates to the idea of technology gone bad, there's enough of it there to justify its inclusion. The wraparound story deals with a programmer (Jeffrey Byron) who has created a sentient computer he calls X-CaliBR8. He and his girlfriend are transported to a mystical realm where a sorcerer (Richard Moll) puts him through a series of tests, which make up the various segments in the anthology. The movie is like an all-star production for Charles Band's Empire Pictures, with directors like Ted Nicolau (Subspecies), John Carl Buechler (Troll), Dave Allen (Puppet Master II), Peter Manoogian (Eliminators) and Band himself contributing segments. This is perfect 1 a.m. material because it's a crazy genre movie and introduces a new story every couple of minutes. Plus there's an appearance by W.A.S.P.! 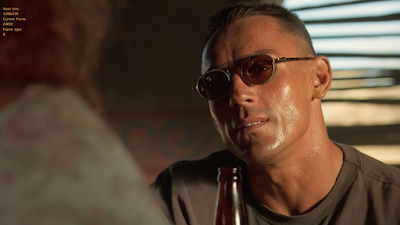 If I can't fit any Italian horror into this spot, I'm going to make damn sure my boy Albert Pyun is represented. This post-apocalyptic (because Albert Pyun) sci-fi action movie stars Olivier Gruner as a government agent who is attacked and left for dead, brought back to life by being turned into a cyborg. While he is being tracked by the LAPD, Gruner works to hunt down other androids who are infiltrating positions of power. There's way more to the story, but it's pointless to explain it because the movie doesn't make a ton of sense. It's one of Pyun's most ambitious films, packed with special effects and a cyberpunk aesthetic -- it is, in many ways, the ultimate Albert Pyun movie. At least three sequels were made, none of which I have seen. 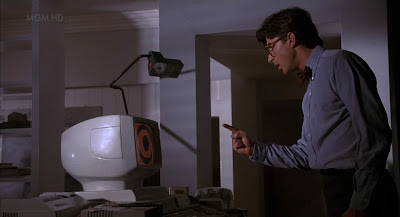 I know I saw this movie, about a love triangle between a man (Lenny Von Dohlen), a woman (Virginia Madsen) and a computer (voiced by Bud Cort), but I don't remember a thing about it. My only memory is that I watched it on cable alone on a Saturday afternoon when I was probably 7 or 8 and cried so hard when it was over that my mom had to console me. SPOILERS: they turn the computer off at the end, which played directly into all of my childhood anxieties and sadness about dying. Hopefully I handle it better at 6 a.m. as an adult who has already sat through nine movies. Probably not. 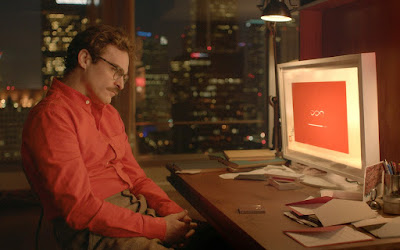 Let's keep things on the sentient-technology-falling-in-love tip and watch Spike Jonze's latest masterpiece as the penultimate film. Joaquin Phoenix is incredible as a heartbroken man who begins a relationship with his Operating System (voiced by Scarlett Johansson, doing some of the best acting of her career). I love the slightly futuristic world that Jonze sets up. I love how sensitive and thoughtful the movie is. I love what it has to say about our relationship with technology; it's one of the few films programmed in this marathon not to panic about the potential of artificial intelligence. This is probably a little too slow and quiet this late in the marathon, but that also might be the perfect time to revisit it. 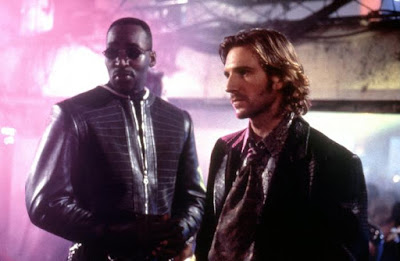 Let's end with a bang. There is a ton of greatness inside Kathryn Bigelow's vision of the future (with a screenplay by James Cameron) in which virtual reality is sold like a drug and uncovers a massive murder conspiracy that threatens to burn L.A. to the ground. Not all of it works, including the climax, but there's enough originality and invention on display for this to count as one of the most underrated sci-fi films of the '90s. Ralph Fiennes is good as the sleazy, fast-talking "dealer" at the movie's center, but every single cast member gets laid the fuck out by Angel Bassett's turn as his loyal and kickass bodyguard. She's so good the movie should be seen just for her performance. The climax centers around a New Year's Eve countdown, which can pull double duty as your own countdown to the end of the marathon. Where is the Blu-ray of this one already?
Posted by Patrick Bromley at 12:00 PM