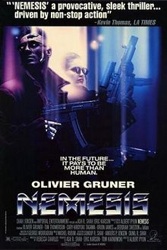 Albert Pyun has made his last movie.

Incredibly prolific cult director Albert Pyun announced via Twitter and Facebook this week that he is suffering from MS and that his health has gotten bad enough that he is retiring from filmmaking, effective immediately. He directed 47 films during his 30-year career, most commonly in the sci-fi and action genres. Because he worked so often, because his budgets were so low and his films went straight to DVD, Pyun has earned the reputation of being a kind of modern-day Ed Wood. It's a label at once unfairly dismissive and appropriate, if only because, like Wood, Pyun loved making movies and continued to make them no matter what challenges lay before him. He didn't always have the budget or the resources to fulfill his vision, but there's still vision on the screen. Too many critics only ever saw the limitations. Not his fans. I'm a fan and proud of it.

At one point, he and I talked about him coming on the show to talk about his career. It's sad that it won't happen now, but only because of the why it won't happen. Our best wishes to Albert Pyun, his partner Cynthia, their families and their fans.

Here are 10 movies that best represent Pyun's body of work. If you haven't seen his movies, these picks are a great place to start. Some of them are hard to come by (especially in their intended form) so get to work.

1. The Sword and the Sorcerer (1982) Pyun's first movie remains his highest-grossing effort, making over $36 million when it was released in 1982. It's often regarded as one of his best, probably because it has more scope and polish than a lot his smaller-budgeted movie. As fantasy films go (and they were VERY MUCH in fashion in '82, which speaks to the film's box office performance), this one is totally serviceable with a few good elements -- namely Richard Lynch's bad guy turn and Richard Moll playing the titular sorcerer under heavy prosthetics. Though it bears little of his mark as a filmmaker, the movie demonstrates Pyun's competence with genre material and has the same hand-made quality that makes so many of his later films special. Anchor Bay released the movie on DVD in 2001, which is now long out of print and goes for around $100. That makes the movie hard to find, which is too bad. It's due for a Blu-ray restoration. 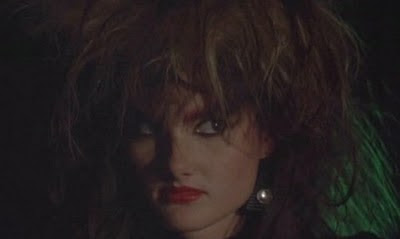 2. Vicious Lips (1988) Ok, it was a toss-up between this one and Radioactive Dreams for the second slot, since both are fun and goofy cult sci-fi comedies that could have only been made for a major studio during the '80s. Albert Pyun made a series of low-budget genre movies in that decade (many of which were for Cannon Films), and it was during this period that his aesthetic and personality really became clear. Vicious Lips tells the futuristic story of an all-girl rock band who book a gig at a club on another planet, but they're stopped en route to the gig by a killer mutant who has boarded their ship. Though it sounds like a sci-fi horror movie, Pyun plays it mostly for laughs -- it's more Earth Girls are Easy than Alien. It's got the futuristic post-apocalyptic setting, the emphasis on musical numbers, the dream-like narrative -- all things we would eventually come to associate with Pyun's work. While it's not necessarily one of his best movies (though it is a lot of fun), Vicious Lips is one of the purest early expressions of an Albert Pyun movie. Like many of his movies from this period, Vicious Lips has never received a DVD release. It was available on Netflix Instant for a while and shows up on MGM HD from time to time. If its sounds like your kind of movie, keep an eye out.

3. Cyborg (1989) Here's where Pyun's career really starts to turn -- not because the movies are all that much different, but because he really began clashing with studios and having his films taken away and recut (this might have happened on some of his '80s work, but I haven't heard him say as much). Cyborg, conceived and written on the fly to make use of the scrapped sets and pre-production for both Masters of the Universe 2 and Cannon's version of Spider-Man that never came to be (both of which were to be directed by Pyun), finds Jean-Claude Van Damme escorting a cyborg through a post-apocalyptic wasteland. Very little of the movie is what Pyun wanted to make, from the casting of Van Damme to the final cut, which was reedited by the star and his partner Sheldon Lettich into something vastly different than what Pyun intended. The director's original vision is available on DVD and Blu-ray as Slinger, and it plays up more of the Satan-worship and "rock opera" aspects of the film (the characters are all named for musical instrument manufacturers; Pearl Prophet, Gibson Rickenbacker, etc.). His narrative structure is better, as is the guitar-heavy score by frequent collaborator Tony Riparetti. Even in its theatrically released form, Cyborg is an entertaining entry in low-budget sci-fi cinema. Pyun does a good job of creating a wasteland with very little money, and Van Damme is actually really good in an early performance. Believe it or not, this is one of Pyun's most mainstream movies.

4. Captain America (1990) Pointed to for years as evidence that mostly bad movies had been made from Marvel Comics superheroes, Pyun's take on Captain America actually looks better now than it did in 1990. Maybe that's because every other blockbuster released these days is a comic book adaptation, including the big-budget adaptation Captain America: The First Avenger in 2011. Having multiple interpretations of the same character makes it easier to see Pyun's take as a slightly goofy, old-fashioned tribute to a character for who he clearly has a lot of affection. It's one of Pyun's movies that feels the least like a Pyun movie, save for the fact that approaches the material seriously and isn't goofing on any of it, even when it is kind of goofy. The movie has its problems -- many of which are budgetary -- but they're outweighed by its charms. After years of being unavailable except on VHS, Captain America was recently put out on DVD via that MGM on demand service, and earlier this year got a good Blu-ray release from Shout! Factory. This, too, is not Pyun's version of the movie -- something that can be said about most of his films going forward. For a long time, Pyun was going back and creating Director's Cut DVDs of his movies and selling them himself through his website, but Pyun said in his retirement message that he will not be creating any more. A director's cut of Captain America does exist, but may now be in short supply. 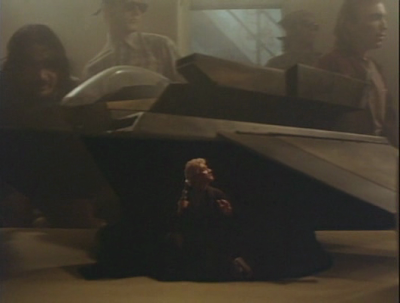 5. Dollman (1991) After spending years making movies for Menahem Golem and Yoram Globus at Cannon Films, it only made sense that Pyun would eventually team up with another low-budget tycoon: Charles Band and his Full Moon Pictures. Tim Thomerson stars as an alien cop who is normal sized on his home planet, but who is revealed to be tiny when he arrives on Earth in pursuit of a bad guy. Jackie Earle Haley plays a villain (this was during the lean years, pre-Little Children comeback). The movie is grimy and ugly but amusing, best viewed as a curiosity. A B-movie giant like Pyun collaborating with a B-movie giant like Full Moon Pictures deserves our attention.

6. Nemesis (1992) Just one year after Dollman, Pyun released what may be his definitive cyberpunk opus: a movie combining cyborgs, the apocalypse, sex, violence, action, stop-motion robots, existential questions of identity and a cast that includes Tim Thomerson, Brion James, Vincent Klyn, Jackie Earle Haley, an early performance by Tom Jane and starring French kickboxer Olivier Gruner. It's messy but deserving of its cult status; Pyun's reach exceeds his grasp, but the ambition and invention on display makes up for the movie's shortcomings (chief among them being the performance by Gruner). Again, the finished film isn't really the one Pyun wanted to make. Star Gruner was forced on him, the film was reedited and the ending changed. The theatrical cut is hard to come by (the DVD is out of print) but like many of Pyun's films post-Cyborg, a director's cut is available through the filmmaker's website.

7. Brainsmasher...A Love Story (1993) Though much of his filmography is made up of action and sci-fi films, Pyun liked to zag every once in a while. One such anomaly in his career is the romantic action comedy Brainsmasher starring Andrew Dice Clay as a bouncer hired to protect model Teri Hatcher from a gang of (not) ninjas. Though spotty in terms of plot, it's interesting to see Pyun flex some comedy muscles and, like it or not, Clay is an appealing leading man -- especially when he's revealing his inner softie (see also: Casual Sex?). 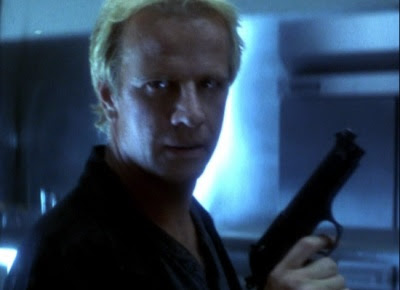 8. Mean Guns (1997) One of Pyun's most experimental movies is also one of his purest action efforts -- it is, by design, a wall-to-wall shoot 'em up. Ice-T plays a crime boss who gathers 100 criminals and lowlifes at a vacant prison and has them fight to the death; last one standing gets $10 million. That's the whole movie. Characterization is thin, but the action is inventive and plentiful; in what has to be the movie's boldest and most fascinating choice, Pyun scores the whole thing with mambo music. The director's cut is pretty much the only way to go with this one, because it's the only version that retains the 2.35:1 scope photography. Most commercially available versions of the movie present it in a full frame broadcast TV aspect ratio, and Pyun's widescreen compositions and the action geography are the best things about the movie.

9. Ticker (2001) Dumbed-down but decent DTV action film features one of the best casts ever assembled for an Albert Pyun movie: Tom Sizemore, Dennis Hopper, Jaime Pressly, Nas, Kevin Gage, Peter Greene, Romany Malco and Steven Motherfucking Seagal. According to Pyun, the released version bears no resemblance to the film he shot. That makes the movie notable because it demonstrates that even a Pyun movie that's been changed and reedited is still pretty good. A director's cut is available, of course. 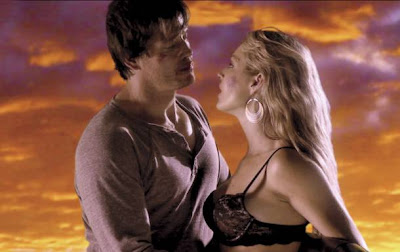 10. Road to Hell (2012) Pyun has said that when he finishes work on the upcoming Cyborg: Nemesis, that will be his final film. Until then, it's Road to Hell, a rock musical pseudo-sequel to Walter Hill's great Streets of Fire that's still unreleased. Michael Pare reprises his role as Tom Cody (here just called "Cody"), now a psychotic drifter driven mad by a life of violence, trying to reunite with his estranged daughter. In some ways a feature-length fan film, Road to Hell is an interesting interpretation of what happens to Cody after Streets of Fire (even if it's not an interpretation I can get behind). Pare's performance is like an exposed nerve, and, like most of Pyun's movies, there's a heavy emphasis on musical numbers (including two of Jim Steinmann's Streets of Fire songs, performed here by Roxy Gunn). Coming as it now does at the end of Pyun's career, it makes a fascinating and moving swan song, as it's a movie entirely about looking back and coming to terms with the past. The film feels angry and tired, but still somehow hopeful. After years of battling to get his movies made and putting up with the critical response, it's hard not to imagine Pyun feels kind of like that. Lucky for us he kept on fighting.

Here's hoping he wins this next fight.